A Night for Lonnie Donegan. 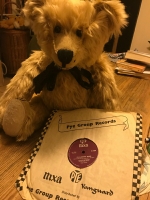 A Night for Lonnie Donegan (And Cheers Chas).

Lonnie – The King of Skiffle.

Ask anyone of a certain age what they remember about Lonnie Donegan and they might well answer… “My Old Man’s a Dustman”.

Whilst showing what a fun loving, ground breaking musician he was, his place in rock and roll history was assured well before this memorable record was released. The fifties were a time when music changed forever. Rock and Roll, almost exclusively from America, hit the post-war world with a succession of singers, culminating in Chuck Berry, Elvis and, Bobby’s favourite, Buddy Holly.

This was a time before many families had television. The only way to listen to music was on records, or Radio Luxembourg. The latter after dark and with pretty dodgy reception. Buying records was a national pastime. The “hit parade” was created by the NME (New Musical Express) as the “singles chart” in the early fifties and later achieved the circulation of a national newspaper. And still exists online under the monniker “Official Charts“.

And then Skiffle hit the airwaves. Music made with cobbled together instruments, including famously a washboard with two hands of thimbles and a tea-chest double-base.

The “King of Skiffle” was Lonnie Donegan. Later considered to be the Godfather of British Rock and Roll. With jazz band roots, he hit the scene with “Rock Island Line” that changed the British music industry forever. In doing so, he is credited with inspiring those who followed. Eric Clapton, Van Morrison, Joe Cocker, the Beatles, the Rolling Stones et al.

The Skiffle craze led to thousands of youngsters forming their own groups but Lonnie, despite being the King of Skiffle, always used traditional instruments. His dad wasn’t a dustman either, but a professional violinist.

At twelve years old, Bobby bought his very first record. And still has it – in its original sleeve! A brittle 78rpm. Lonnie Donegan! Remarkably, it’s the only record of those young days that has survived, before albums and vinyl became the norm.

Don’t You rock Me Daddy-o.

“Don’t You Rock Me Daddy-o”

Sixty years have passed. Lonnie’s place in the stars was eclipsed by the boy bands of the Beatles, the Stones and the British Invasion of the 1960s music scene. But he carried on playing, at the height of his profession, until his untimely death in 2002 at just 71.

He is revered by musicians. None more so than Mark Knopfler, with his own musical tribute “Donegan’s Gone”.

And he was great friends with Chas and Dave. Sang with them in later years. “Pick a Bale o Cotton”, and many others, in a sing along:

In later years, Lonnie’s sons have carried on their father’s legacy. So it was with great excitement that we found ourselves at the magnificent Union Chapel at Islington for “A Night For Lonnie Donegan”. Just a month ago. Just look at the programme and see who headlined a galaxy of old British rock and roll. Chas and Dave. To our disappointment, they were the only ones missing and now we know why.

But first, the concert. Peter Donegan not only looks like his father, but sings like him too. How can it be that sixty years later you can remember the words of certain songs. And join in with the crowd. Mike Berry belting out that other infamous song synonymous with Lonnie:

“Does Your Chewing Gum Lose It’s Flavour on the Bedpost Overnight?”

Wasn’t it fun! The Union Chapel rocked all night. The old, the decrepit, and the young. It was so much fun.

Mike Read “Putting on the Style”.

Billy Bragg “Have a Drink on Me”.

And that’s how the story will end. With Chas and Dave. How sad we are to learn of Chas’s passing. Just like Lonnie, he was fun. A right old knees up. So, in recognition of that and also as a tribute to the “talent” of Bobby Ballcock(!), is our tribute to Chas Hodges:

The Union Chapel programme entry for Chas and Dave.

And finally, last Friday was BBC Music Day. As we drove towards Somerset, we listened to Radio London’s Robert Elms playing his tribute to Chas, ending with a song that brought tears to Bobby’s eyes. He cheered up later, but it showed the power of music.

Here at Mindfully Bertie, the team are bristling with pride! The Technical Director is a keen photographer and sometimes submits a picture to the BBC Weather Watchers. On 25 September, his photo of Birmingham’s Gas Street Basin featured on the late National Weather Forecast.

Ben Rich presenting the weather with our photograph of Gas Street Basin behind!

Lighting a Candle for Diddley and Chas at the Union Chapel.

This week’s candle is lit at the wonderful Union Chapel.

Islington. Last Tuesday, the door was looked and we did an al fresco ceremony on top of a hedge. We needed the glass to keep the candle alight and had gone prepared. The hedge could not support the glass. Searching the rucksack, the eagle eyed amongst you will notice the book we found and used for stability. “Courage to Change”. This was not planned and maybe this was the higher power we talk about in Al-Anon. This little book and the organisation it honours has changed our lives forever.

Without the tragedy of alcoholism, we would not have found Al-Anon.

Without the love and friendship we have been privileged to share, we may not have survived a loved one’s alcoholism.

Without a stepdaughter, Amber living in London we would not have found the Angel Islington Family Group of Al-Anon. And now she is gone too.

Without the commitment to Islington every Tuesday, we would not have found a new life, surviving tragedy and moving on in remembrance on the one hand and a love of life on the other.

Without alcoholism, we would not have been at the Union Chapel lighting a candle. We love you Diddley and will never forget our love affair. We love you Al-Anon for saving our souls.