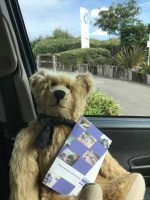 We knew we were going on this Speed Awareness Course. Of course! We wanted to avoid another three points. But Bobby was nervous about taking me in. And didn’t and discovered that even not switching your mobile phone completely off would lead to you being chucked out and the original three points placed on your license. This, of course, to protect the anonymity of those present if that is what they wished. Nevertheless at the start of writing this blog we must assure you that for Bobby the whole thing was a totally positive affair.

Sorry I was going so fast Officer – I’m late for my Speed Awareness Course!

So it was ironic that, listening to Radio 2 one Saturday morning, we heard the following “Pause for Thought” and would like to share it with you. Either on iPlayer or the transcript below:

Pause For Thought: “I’ll take myself on a measured journey.”

And here’s the transcript:

I recently found myself in a room filled with criminals.
Knuckles were cracking. Jaws were grinding and for the first few minutes
our eyes shifted left and right as we sized each other up.

We were all as guilty as heck and our sentence was a speed awareness course.
Here we were, our band of unmerry men and women. The outlaws being punished
by two guys in chequered shirts with a PowerPoint telling us not to drive fast. For four hours.

But the thing is I deserved to be in that room. It was my fault because I just wasn’t paying enough
attention to my speedometer or more importantly to myself.
That speed awareness course, tedious as it may have been, was my wake up call.
And a wake up call is something I generally and desperately need in the roadmap of my life.
I don’t want to zoom past the best part of it.

In neglecting who I am and what I am doing I’ll never know where I am going.
As a Muslim I am meant to pause, reflect and basically do an appraisal of my soul now and again.
I know I need to do this more often so I can develop a deep consciousness of myself, my
surroundings and ultimately my creator.

In other words I have got to stop sleepwalking through life.
Because waking up to who I am can make me the sea instead of the froth.
The water instead of the mirage and give me a life fully lived instead of half scraped through,
So instead of racing at full throttle I can take myself on a measured journey.
A course of self awareness.

As the Islamic saying goes… “be in this world as a traveller”.
(But preferably not just one who breaks the speed limit).

This is a wonderful example of how an idea can develop into a story. How a seemingly disappointing event can be turned to your advantage. Or basically: Everything in life is an opportunity. Even dying… for an undertaker.

Bobby was guilty. Again, for this was his second speed awareness course. Another three years of being a good boy before he can have another go. Yes, he was only going 36 mph. Yes, other drivers go blasting by. Yes, in his working life he was the Highways Agency’s Representative at the Sussex Safer Roads Partnership! If you look at the photos below, you will see who administered the course. Ha ha ha ha ha. No it isn’t funny. Everyone should go on the course. If you listen, you will learn how close we all are to potentially wrecking lives. All of us. Just one little mistake. I hope it’s not you.

And note. One “offender” was on the course for having reckless driven her car at 32 mph in a 30 zone! Bearing in mind that every single one of you reading this story will have done worse. And also note that the old misconception was a limit set by adding 10% plus 2. Not any longer. The excuses that some insist on being “reasons” for being caught are numerous, but are all excuses.

I think no stimulus could be
as potent as the one to pee.
A feeling frequent and innate
is this – the urge to urinate.

It comes each day to everyone
at work, at play, or on the run.
It comes sometimes as home you drive,
and soon you’re hoping to survive
the bursting of your inner dam
while sitting in a traffic jam.

Then down the street you drive distressed
with thighs together tightly pressed.
You wish so badly it would cease
and then you pray for sweet release.

And as you drive, you ache and ache
and curse that drink you had to take.
You want to speed, but big surprise –
a cop’s behind you. Squeeze those thighs
to keep inside what wants to flow!

You do not dare to let it go.
Few impulses can so compare.
Oh, how you’d love a diaper there!
Then home at last, you do a dance.
You run while pulling down your pants.
And horror, if when once inside,
you find the bathroom occupied!
Well, just be glad it’s mountain dew
you’re holding in, not number two!

So here’s a pictorial record of what Bobby thought a very good course. If he concentrated and didn’t talk so much while driving. Didn’t birdwatch on the motorway. “There’s a kite over there.” Dodn’t write stories in his head as he drives along rather than wait until he gets home. Laughing or crying at what flickers into an active mind. It’s going to be hard…

Welcome to your NDORS course!

An example page where no one on a course of say twenty people got them all right! Other activities were: “What are the consequences”, “What are the Hazards”, “Why don’t you keep to the speed limit”, “What are you going to do differently”.

I am telling you all this in the knowledge that far more people have attended Speed Awareness Courses than you could possibly imagine. Most of those we have spoken to see it as a totally positive experience. It’s a fact that modern technology is forcing us to drive more sensibly. In my opinion. Two average speed sites have just been installed near us in Surrey.

So finally, here is a little story about a road that Bobby has driven for years. Thirty of those going to work at the Legal and General. A dead straight road for a couple of miles, with a few up and down small hills. Years ago, it was the national speed limit of 60 mph that drivers broke with impunity. Later it became 40 and still drivers took little notice. Then a speed camera was installed, attacked and burnt out now and again. Once passed the camera, speed increased. The last time Bobby drove along there everyone seemed content to hold back and stay below the limit. This may have been a fluke. Not typical. But, more and more people are going on speed awareness courses. They may be driving out of fear of prosecution, or actually because they learned something on the course.

“You’ve slowed up a lot since your Speed Awareness Course.”

I stayed in the car park!

Lighting a Candle for Diddley on a Blustery Day at Diddley’s View.