About the Mindfully Bertie Blog.

This is a preview of what is to come and, hopefully, amuse you. A smile is all I ask of you.

My name is Bertie. Mindfully Bertie. I am a teddy bear.

I do think a lot as many bears do and have done in the past. Some far more famous than I. My best friend is Bobby Ballcock. A larger than life character who tends to talk a lot. Everybody says so. Together we hope to bring you a ray of sunshine through a mixture of adventuring, laughing, crying, naturing, thinking, remembering.

Each Mindfully Bertie blog will end with a short “Lighting a candle to Diddley.” A homage to Bobby’s late wife Diane. Not sad, but a reason to light candles in remembrance and tell you where they were lit. There will be visiting contributors including candle lighters. When we get underway you may like to offer to contribute.

But first. Who am I and how did I meet Bobby? 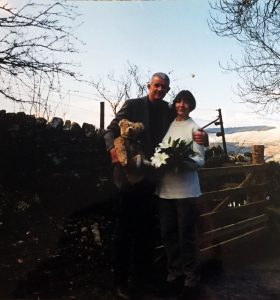 Way back in 1991, Bobby’s mother Dorothy died and left him a few quid. (My years with Bobby have given me a Sarf London accent). He had never had a teddy bear. How sad is that? At that time there was a teddy shop in his home town Dorking in Surrey. Run by a character reminiscent of the wood carver in Pinocchio.

I had come from America and was a very expensive posh bear. It was love at first sight. He bought me, but not before an important admission. I am a twin with Oscar. In fact I was Oscar originally. Bobby had a work friend called Oscar. A very nice chap, who had long flowing blonde locks and got married in a pure white Bee Gees suit with big lapels. At least he married a woman, but Bertie I became. I joined a family with a wife and son. Not long after wife and Bobby went their separate ways and we had our first period alone together. Just the two of us.

Some years later he fell madly in love with a beautiful lady. They married by a Scottish loch. I was best man. For many years, life was wonderful. I went everywhere with Bobby and Diddley. Her pet name derived from Diddley I Di. Itself from Diane. In recognition of her mad, loveable crazy personality. As the years went, by the grandchildren arrived one by one and you will meet them all as the weeks and months go by. 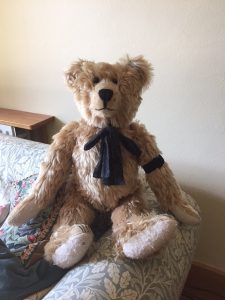 On 23rd August 2015 a great sadness descended when Diddley passed away. I was chief mourner at the funeral. Bobby and I were alone again. Sadness is ok but Diddley wouldn’t want that for too long. And so here we are. Writing the Mindfully Bertie blog together to celebrate life but never forget the lovely lady.

The very first candle has been lit by Bobby here at Laurel Cottage where we all had such happy times. Where the family and friends and you through this blog are always welcome. Just bring a smile.

This website uses cookies to improve your experience while you navigate through the website. Out of these, the cookies that are categorized as necessary are stored on your browser as they are essential for the working of basic functionalities of the website. We also use third-party cookies that help us analyze and understand how you use this website. These cookies will be stored in your browser only with your consent. You also have the option to opt-out of these cookies. But opting out of some of these cookies may affect your browsing experience.
Necessary Always Enabled
Necessary cookies are absolutely essential for the website to function properly. These cookies ensure basic functionalities and security features of the website, anonymously.
Functional
Functional cookies help to perform certain functionalities like sharing the content of the website on social media platforms, collect feedbacks, and other third-party features.
Performance
Performance cookies are used to understand and analyze the key performance indexes of the website which helps in delivering a better user experience for the visitors.
Analytics
Analytical cookies are used to understand how visitors interact with the website. These cookies help provide information on metrics the number of visitors, bounce rate, traffic source, etc.
Advertisement
Advertisement cookies are used to provide visitors with relevant ads and marketing campaigns. These cookies track visitors across websites and collect information to provide customized ads.
Others
Other uncategorized cookies are those that are being analyzed and have not been classified into a category as yet.
SAVE & ACCEPT
Loading Comments...