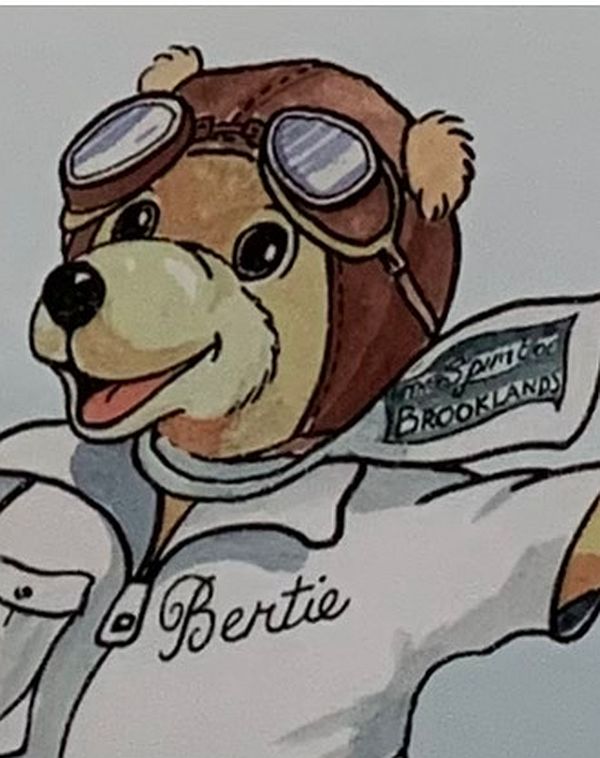 Bertie: “Well, Brooklands Bertie, you really surprised us. Here at Mindfully Bertie we have the main bears. Me, Trevor and Eamonn. We all write stories. On the front room couch are the soft toy bears that Bobby has bought in moments of weakness at special events. Destined to languish on the couch forever. That’s where you have been for five years. Wearing a toy racing helmet and goggles. And that’s where you would have stayed, but for the strict rules at Wembley Stadium.

I was so disappointed to be told that I was too bleedin big to be allowed in for the Cup Final. Eamonn too. Trevor refused to go, but was too big anyway. Stuck up twot! How could we support Sutton United ‘bearless’? Then I saw you on the couch. Without the naff helmet and goggles, you scrub up really well. The racing overall even has your name on it. With Carol’s Sutton United teddy bear scarf you looked pretty good and just about squeezed into Bobby’s pocket. At Wembley, I heard you were really accepted by the fans, including Frances, who has taken pictures of me at Gander Green Lane. She is the Teddy Bear Lady. Recognised Bobby and loved you. You did us proud.” 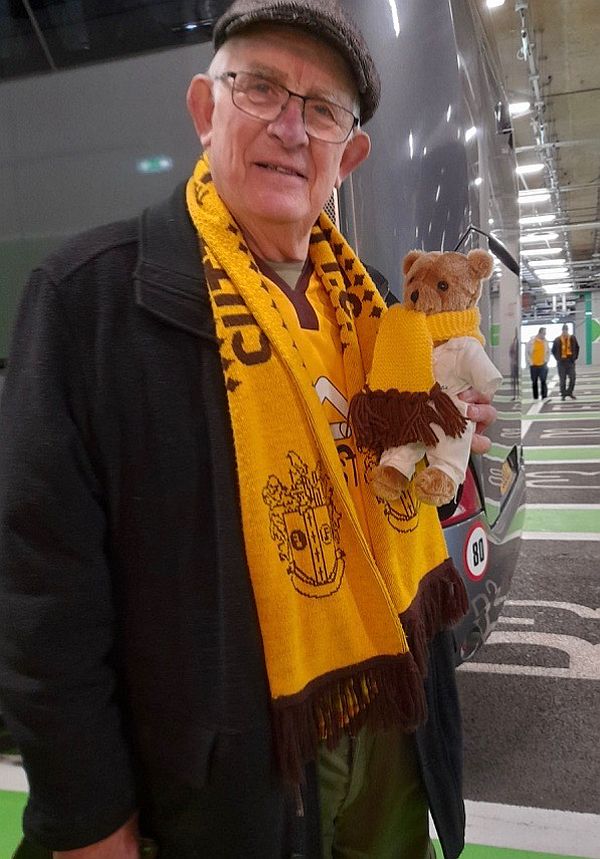 So to say ‘thanks mate’, we have a special treat for you. The week after Wembley it was Brooklands Big Bus Rally. We sent you with Bobby, Anne and John to cover it. With one condition. No buses! Last week’s blog was all buses. Bobby, Anne and John are plane spotters. So you are only to show aeroplanes.

Well first of all, you are not just a soft toy. You are the mascot of Brooklands Motor Racing section of the museum. I salute you. So a few cars are OK. But no buses. Stick to planes. 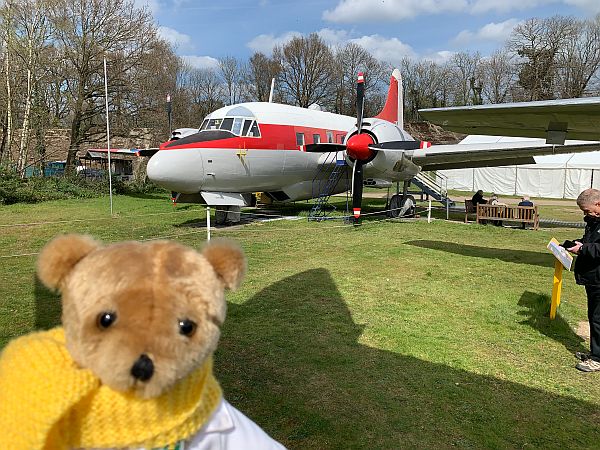 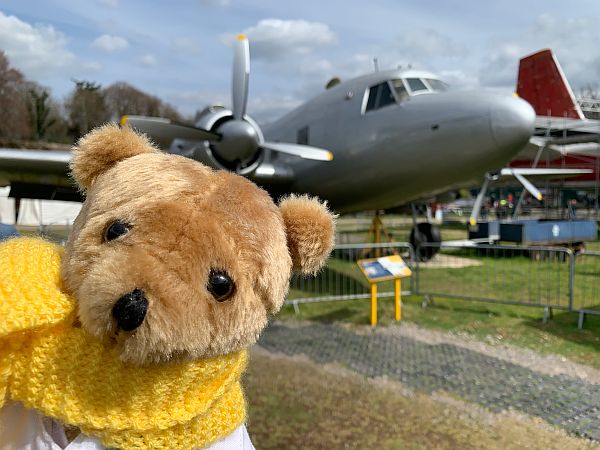 So here we are at Brooklands Big Bus Rally and not a single picture of a bus. We have written lots of stories from Brooklands. Here’s a good one. One that has Brooklands Bertie in it five years ago. 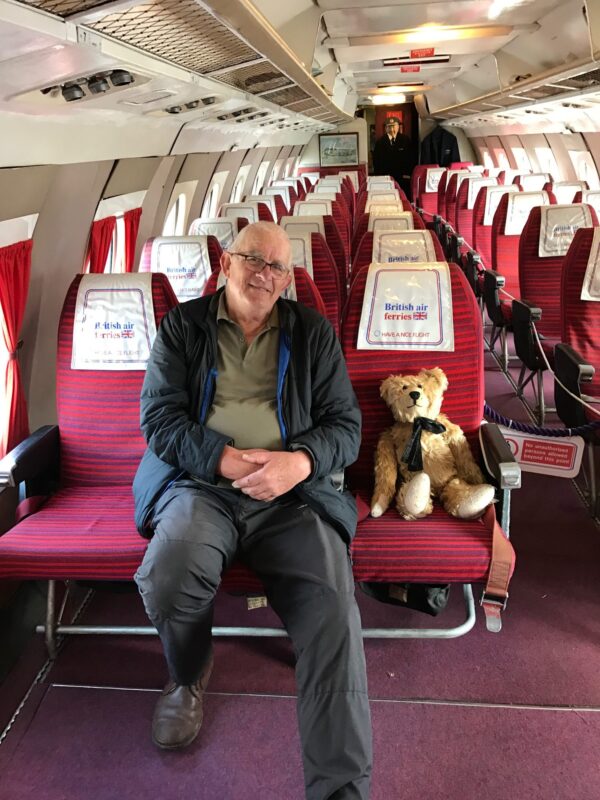 Vickers Viscount. This actual plane was the very first airliner that Bobby ever flew in. To Guernsey. The full story is in the link above. 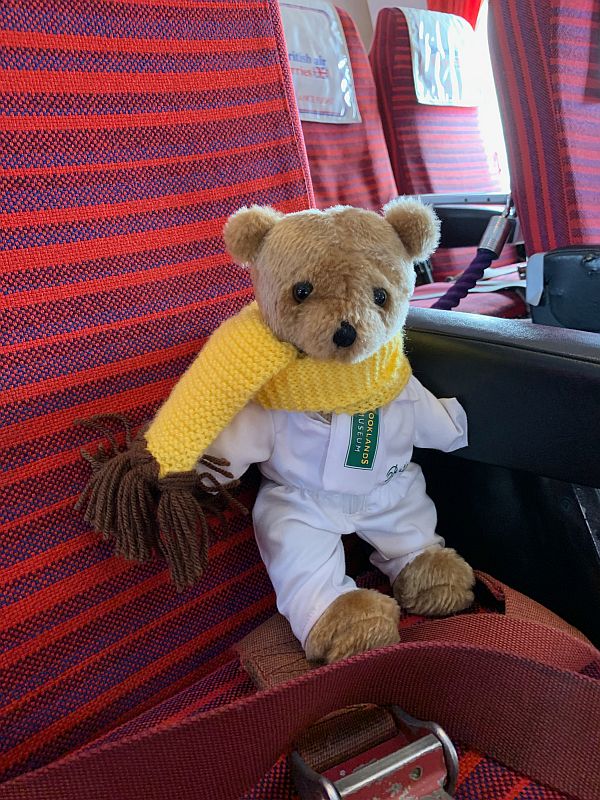 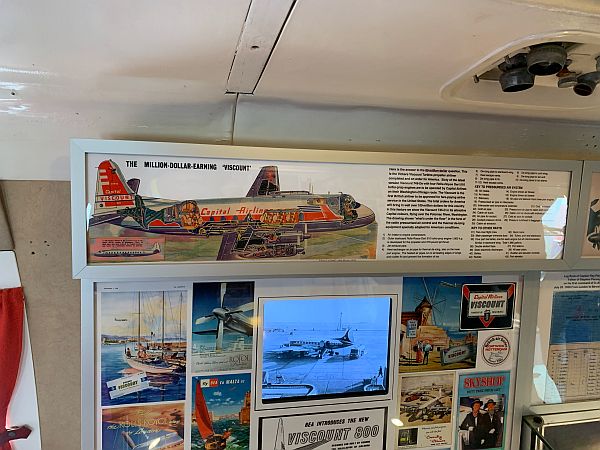 Inside the Viscount, a display including the cutaway drawing of a Viscount. 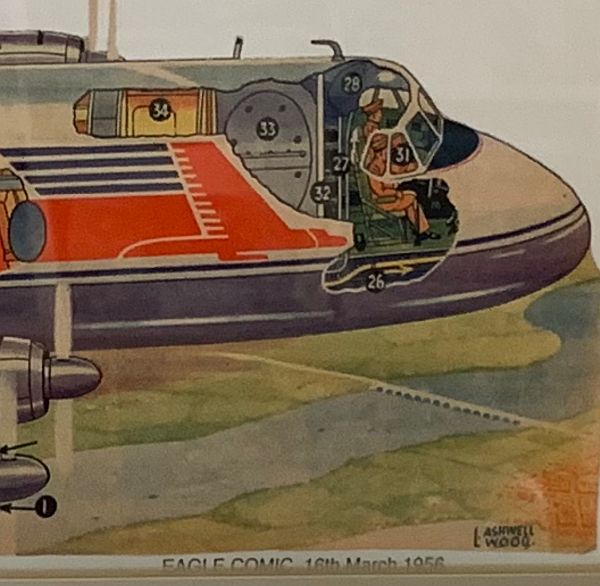 Where did the cutaway come from? The Eagle Comic, 16 March 1956. Which reminds us. We have at least one more story to write about the Eagle. 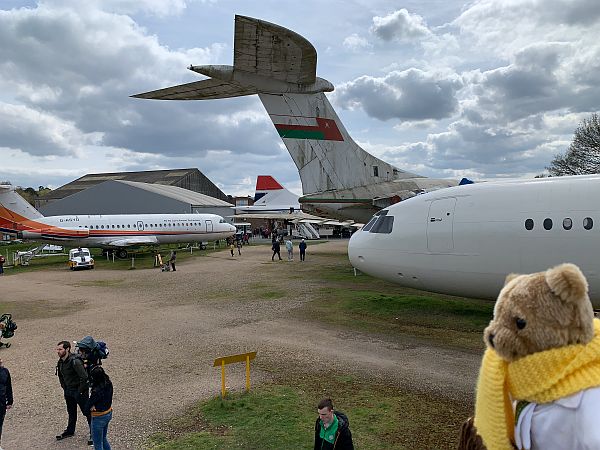 Corrr. One and a bit VC10s. BAC One Eleven and Concorde. 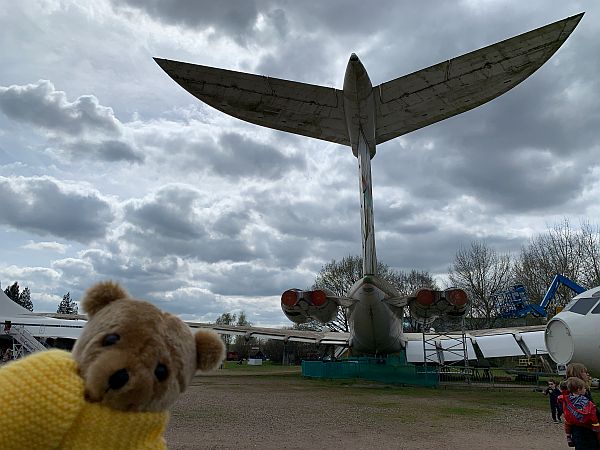 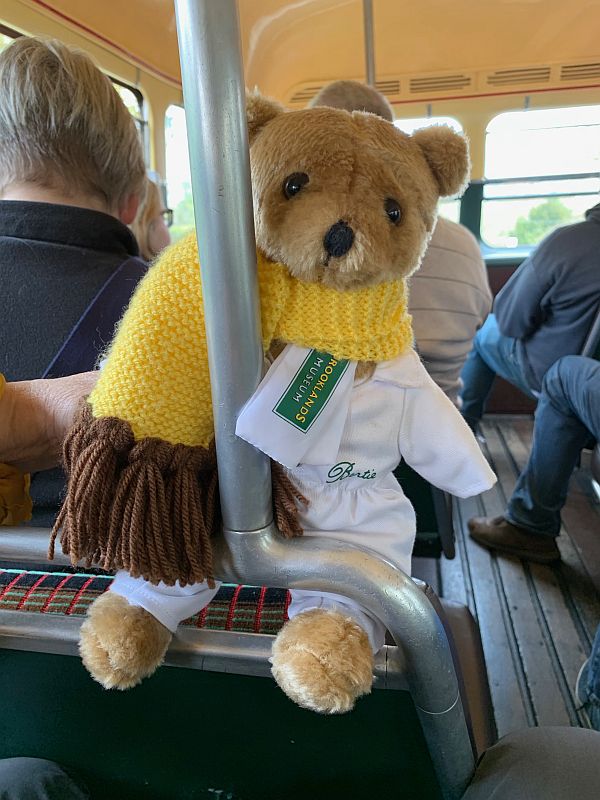 Hang on – we said no buses! But I hear you went all round the local countryside on the top of an old red double decker with three plane spotters. 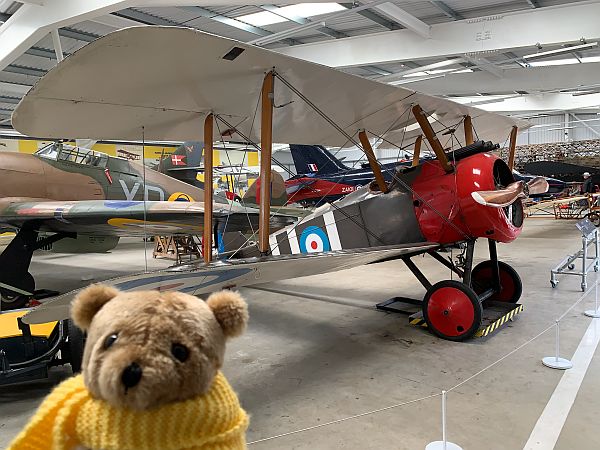 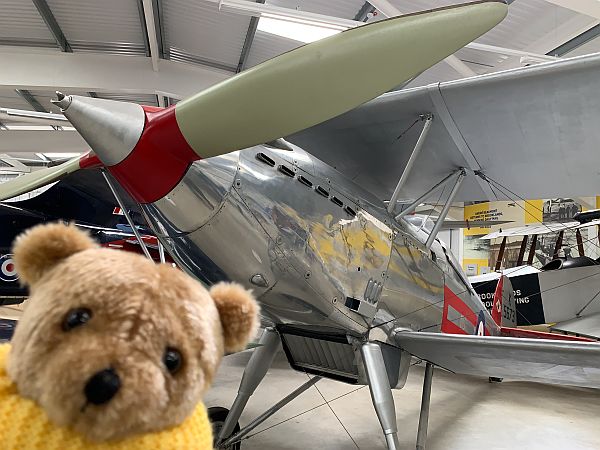 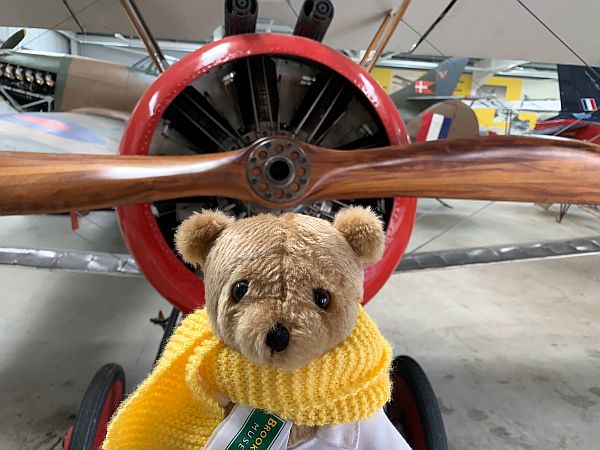 You wouldn’t want them to start that up! 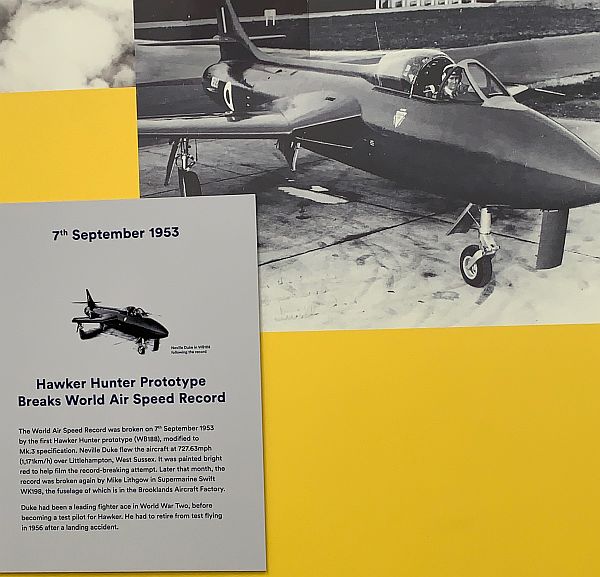 Another reminder. That Hawker Hunter is in Tangmere museum and is included in a very special story… ‘soon’. 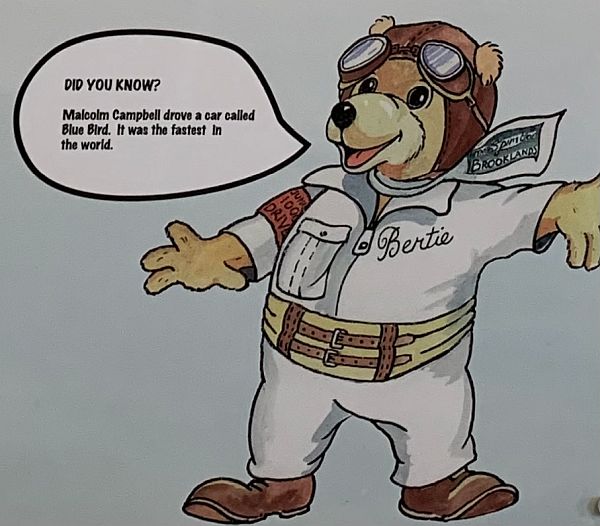 Cars Bertie! Brooklands Museum is primarily about its history as the first motor racing circuit in the world. If you have never been, there is lots to see. And Brooklands Bertie is there to help. 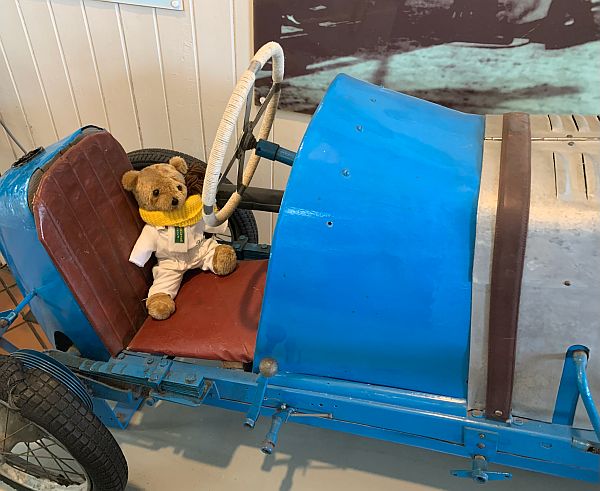 I had my picture taken in that. I could reach the steering wheel! 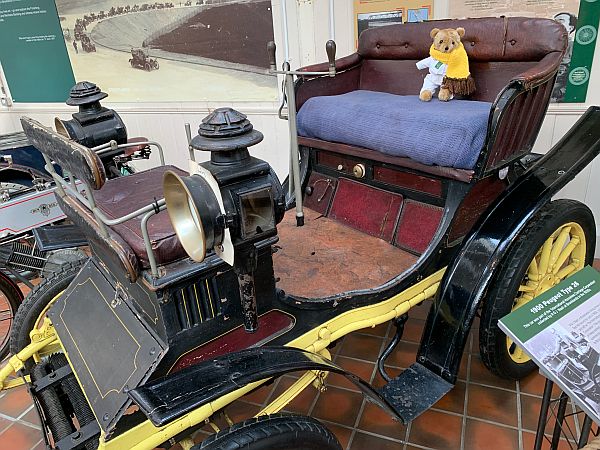 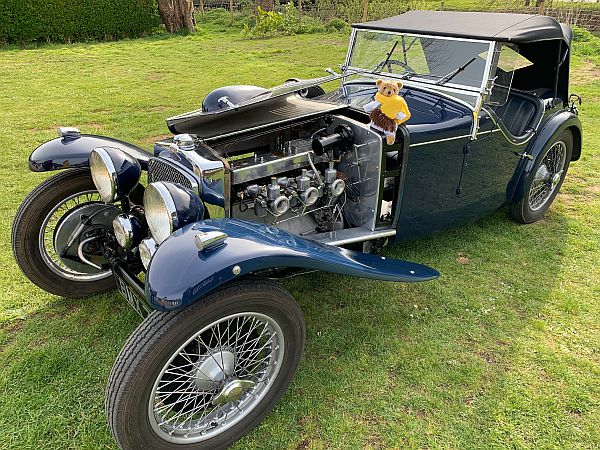 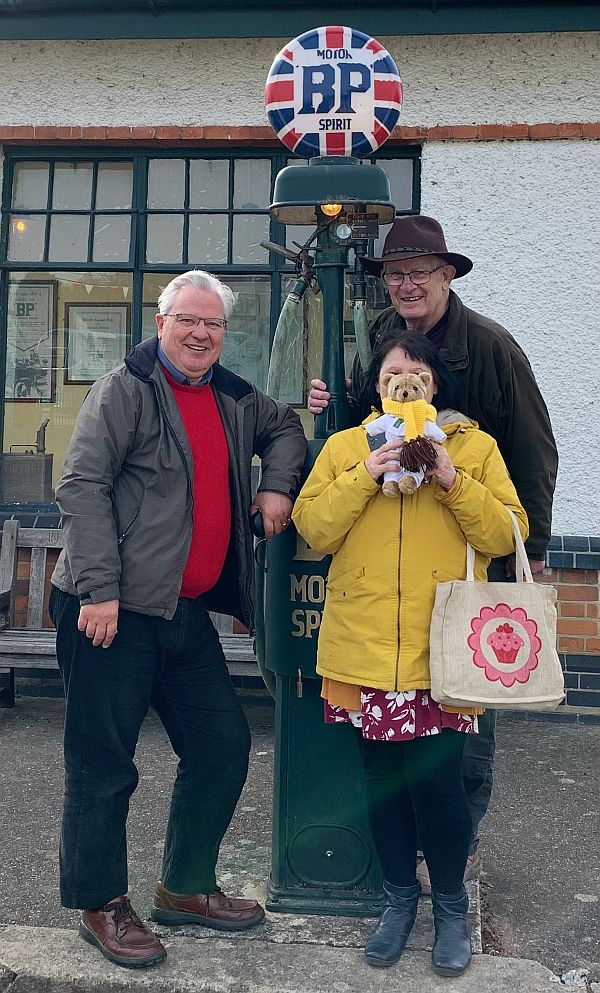 When you read this blog, Bobby and the bears will be on holiday in Pembrokeshire. Believe me, he needs it. We have so many stories to write. In this one alone we have mentioned two more and if you look at the candle picture you will see Thunderbolt. A very special car indeed from a long time ago. A story that will take us to the National Motor Museum at Beaulieu.

At the very beginning in 2016, we always said that the plan was there wasn’t one. What would be would be. We never looked past the next week or two, but here we are, nearly 6 years later, and over 400 stories covering everything you could ever imagine and more.

And we are so grateful that Tim has been with us doing the technical work every step of the way. Bobby tells everyone it’s written for himself and he couldn’t care less how many people read it. Don’t believe him! I know that he gets enormous satisfaction when people tell him they like particular stories. So if you approve – say so!

And have we fulfilled what we set out to do… here is our vision in August 2016. 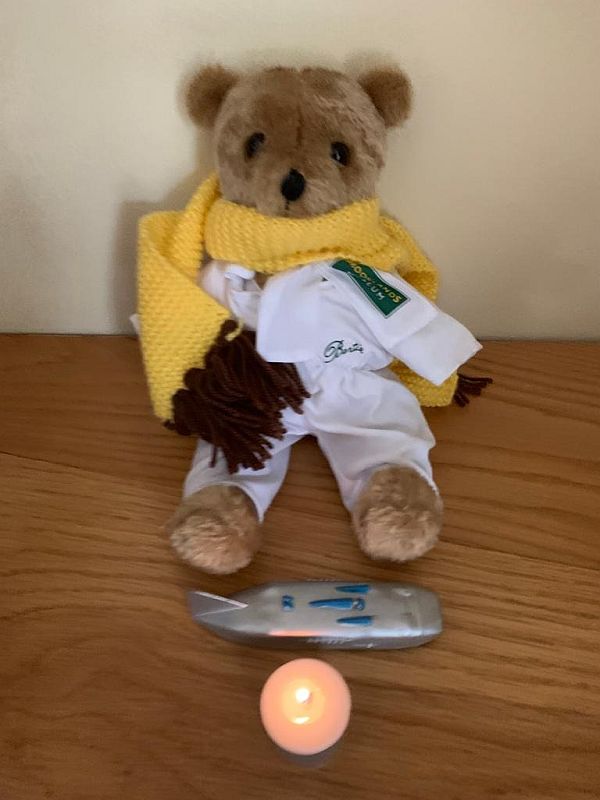