Back in 2007, Bobby took part in a walking holiday with his office friends. It was the heyday of the Adventure Club he had helped to form that has been featured in these stories before. They stayed in Ross on Wye and one day walked a length of the River Wye into Monmouth. In the town centre, to his surprise at the time, was a striking statue of a man holding a model of a very early aeroplane. It was Charles Rolls. Now every schoolboy of Bobby’s disposition knew about the legendary partnership between Charles Rolls and Henry Royce that led to what it still known today as the finest motor car in the world. And one of the world’s most famous names Rolls-Royce. By this time his son Andrew was working for Rolls-Royce Motor Cars and he sent him a picture of the statue and thought little more about it. The holiday was fun and the statue never really thought about again…

…Until now, when the firm remembers the 110th anniversary of a massive achievement by one of its founders. Charles Rolls had become a legend in early aviation.

The two pictures sent by Bobby to Andrew in November 2007: 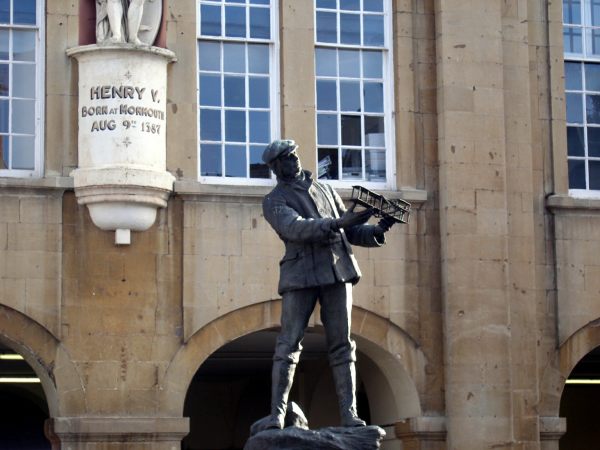 At 6.30pm on 2 June 1910, aviation pioneer Charles Stewart Rolls took off alone in his flimsy biplane from Swingate Aerodrome, near Dover, to achieve the world’s first double crossing of the English Channel by aeroplane. 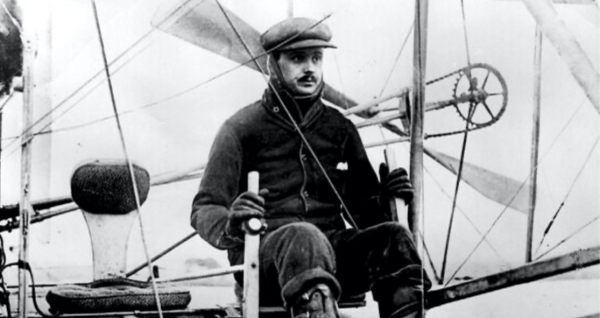 He had been waiting in frustration for over a week, his departure repeatedly frustrated by high winds, fog or mechanical problems with the machine. But finally, conditions were perfectly calm and clear. Among the spectators on the cliffs were Rolls’ parents, Lord and Lady Llangattock, and his sister and brother-in-law, Sir John and Lady Shelley. 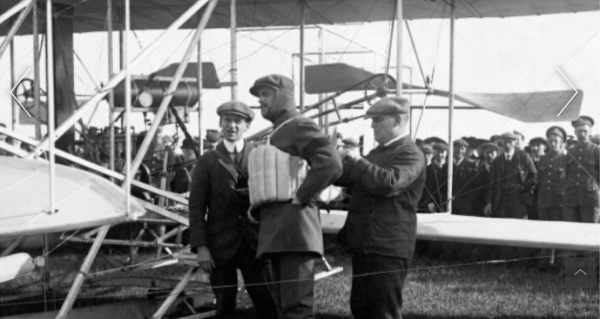 According to a report in the Daily Telegraph, Rolls reached an altitude of 900 feet and a speed of “quite forty miles per hour” as he approached the coast of France. By 7.15pm, he was flying over the small French town of Sangatte, where the present-day Channel Tunnel emerges. Leaning out of his aeroplane, he threw overboard three weighted envelopes, each containing the message. “Greetings to the Auto Club of France… Dropped from a Wright aeroplane crossing from England to France. C.S. Rolls, June 1910. P.S. Vive l’Entente.” 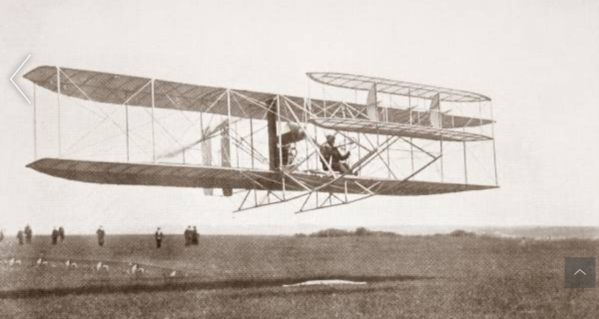 Charles Rolls takes off in his Wright Flyer.

He then turned northward and set a course for the English coast. At 8.00pm, he was back in Dover where, The Daily Telegraph reported, “the seafront, cliffs and piers were thronged with people, all in the most intense state of excitement”. Rolls rewarded them in typically flamboyant fashion, by flying in circles around the outer towers of the town’s medieval Castle. “I decided that, as I had plenty of petrol and my engines were working splendidly, I would encircle the Castle, although it would lengthen my flight considerably” he told the Telegraph correspondent. The crowd loved it. This was more than mere entertainment. They knew they were present at a moment of history.

In an adventure lasting 95 minutes, Rolls had achieved two immortal landmarks. He had become both the first Englishman to fly an aeroplane across the English Channel, and the first aviator ever to fly non-stop from England to France and back again.

The flight caused a sensation and made Rolls an instant national celebrity. The recently crowned King George V sent a personal telegram – “the Queen and I heartily congratulate you on your splendid Cross-Channel flight. George R I.” The aero clubs of both England and France presented him with special awards. London’s famous Madame Tussauds even began making a waxwork of him. Flight Magazine, meanwhile, lauded his Corinthian spirit, loftily assuring its readers that Rolls had made the crossing not in the name of “merely winning souvenirs” and “without the smallest monetary inducement” – a claim that may have rankled somewhat with Rolls, who had spent almost a third of a million pounds (at today’s prices) of his own money on flying in the first half of 1910 alone. It was perhaps with this in mind that he wryly remarked: “It is the only time I have succeeded in taking ten gallons of fuel in and out of France without paying duty.”

It is a sign of how quickly aviation and aeroplanes were developing that Rolls’ record-breaking flight came less than a year after Louis Bleriot had stunned the world with the first powered flight from France to England in July 1909. Rolls made his crossing in a Wright Flyer, designed by Wilbur and Orville Wright, who had recorded the world’s very first flight in a heavier-than-air machine just seven years early in 1903.

The timescale underlines the truly perilous nature of Rolls adventure. His aeroplane, built from wood and fabric, braced with spars and wires, had a wingspan of just 12 metres (40 feet) and weighed only 457kg (1,008lb) including the engine – about the same weight as a grand piano. The physical dangers of crossing the sea in so primitive a machine are obvious. Rolls himself decided to attempt the return trip only when he was actually over Sangatte and reassured himself everything was working well.

His sole concessions to safety were a life jacket for himself, and four large buoyancy bags filled with compressed air lashed to the machine’s undercarriage. The Daily Telegraph noted laconically “Happily, there was no need to test their efficacy.”

But Rolls was as experienced as he was daring. His flying career spanned what was then virtually the entire history of aviation. Born in 1877, Rolls had been fascinated by engines since his schooldays – he went on to earn a degree in Mechanical & Applied Science from Trinity College, Cambridge – and was captivated by flying from its inception. He was a founder member of the Royal Aero Club, initially as a balloonist, making over 170 flights and winning the Gordon Bennett Gold Medal in 1903 for the longest sustained time aloft. 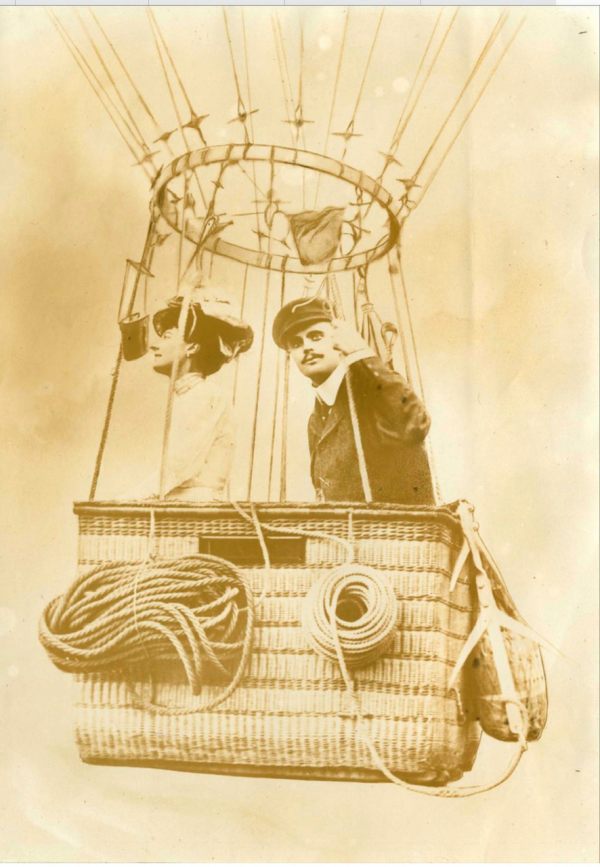 In the spring of 1909, when the Wright brothers came to England as guests of the Royal Aero Club, Rolls acted as their official host. A year later, he became only the second person in England to be awarded an aeroplane pilot’s licence.

After their historic first meeting in 1904, Rolls tried to persuade Henry Royce to build an aeroplane. He failed – one can only speculate as to what marvels might have resulted had he succeeded – but undeterred, Rolls bought a Wright Flyer in which he made more than 200 flights.

Tragically, it was in such a machine that Rolls met his death just a month after his Cross-Channel feat. On 12 July 1910, during a competition at Bournemouth, the tail piece broke off and the aircraft plunged to the ground from a height of 100 feet, crashing close to the crowded grandstand in a tangle of spars and canvas. Rolls sustained a fractured skull and was pronounced dead at the scene. He was the twelfth person in history to be killed in a flying accident and the first Briton to lose his life in a powered aircraft. He was just a few weeks short of his 33rd birthday.

Although Rolls is vastly more famous today for his automotive achievements, his contribution to aviation was immense and important. Two statues were erected in his memory. One in Monmouth, where his family had large farming estates. And one in Dover, to commemorate his double channel crossing. Details follow. But first, you may like to watch this YouTube from the Isle of Sheppey that became part of Rolls’ story.

Charles Rolls was born in Berkeley Square, London into an aristocratic family that owned land and estates near Monmouth. He was therefore Welsh. It was fitting that his achievements were celebrated there by the erection of that statue in 1911. He is also buried nearby with members of his family. On occasion, the statue has been rededicated. 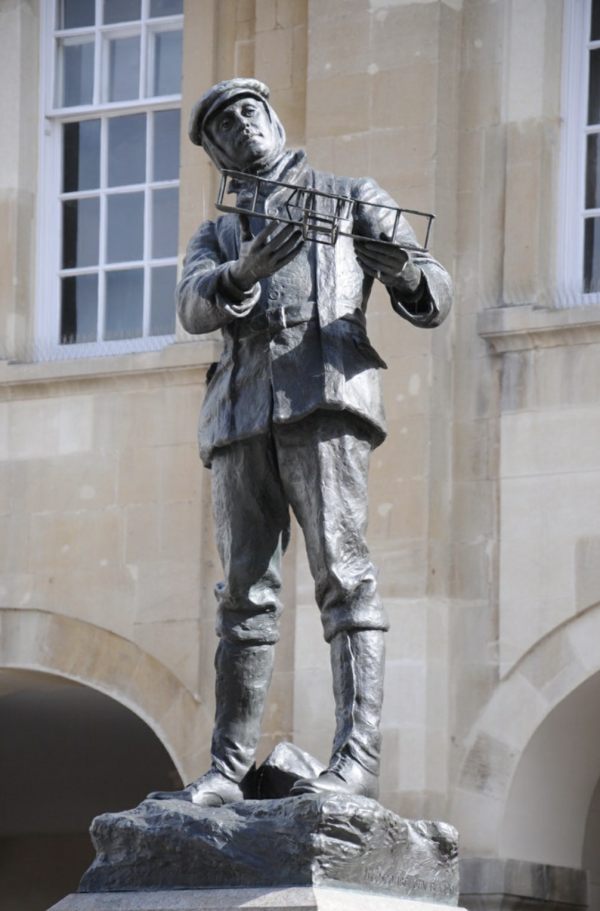 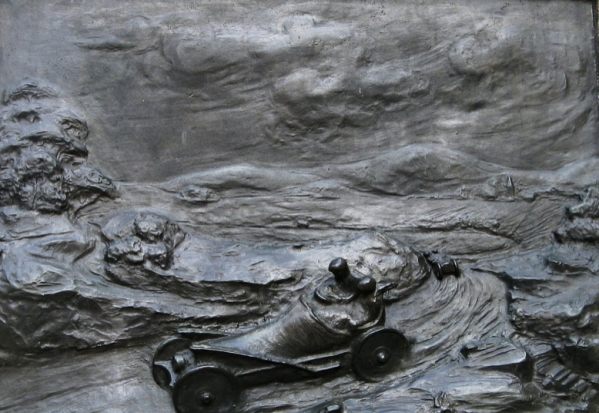 Plaque on the base of the statue celebrating car racing. 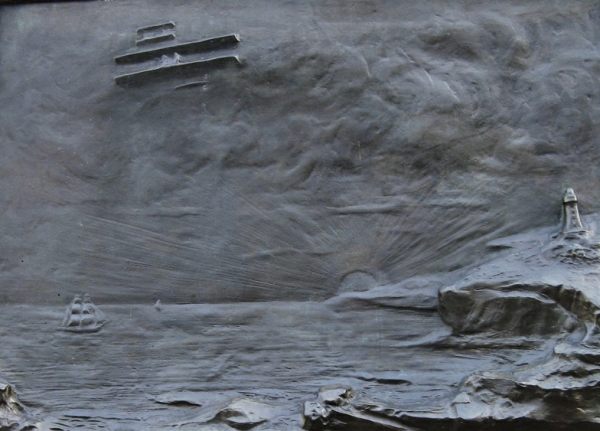 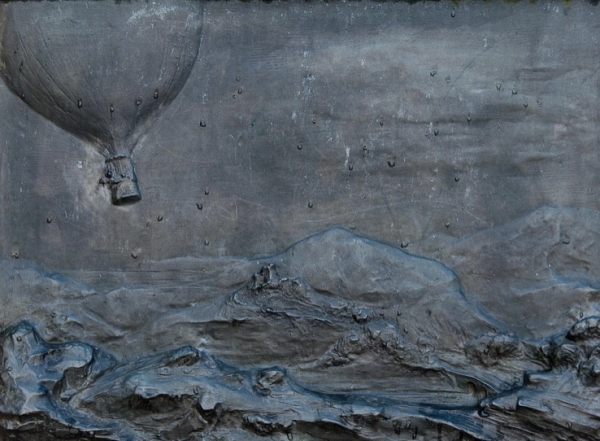 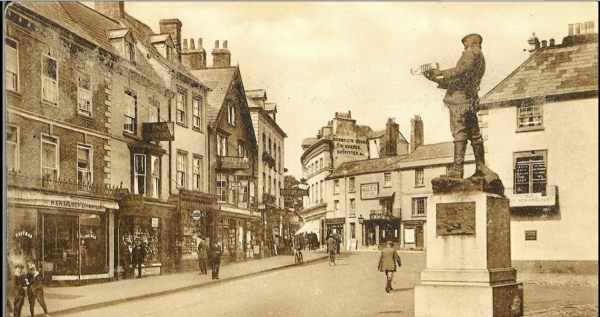 Agincourt Square, Monmouth in 1911. Go back to the first picture and you will see another famous Monmouth son. Henry V.

Dover was witness to his achievements and a statue was erected there and unveiled in April 1912. The sculptor was Kathleen Scott, wife of Captain Robert Falcon Scott. At the time, she was unaware that he had perished on that fateful expedition to the South Pole. This statue has been moved a number of times through damage in the war and redevelopment of Dover seafront. It too has been rededicated as a man regarded at the time as a hero. 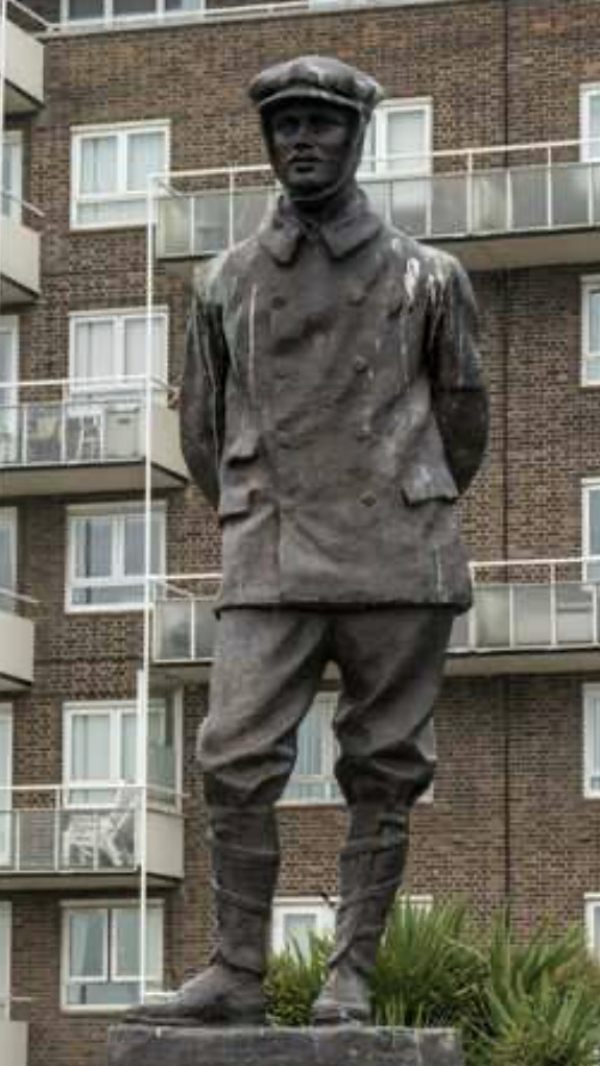 Inscription on the Dover statue. 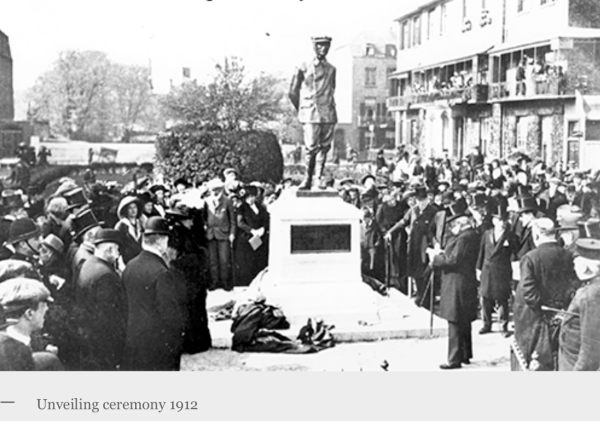 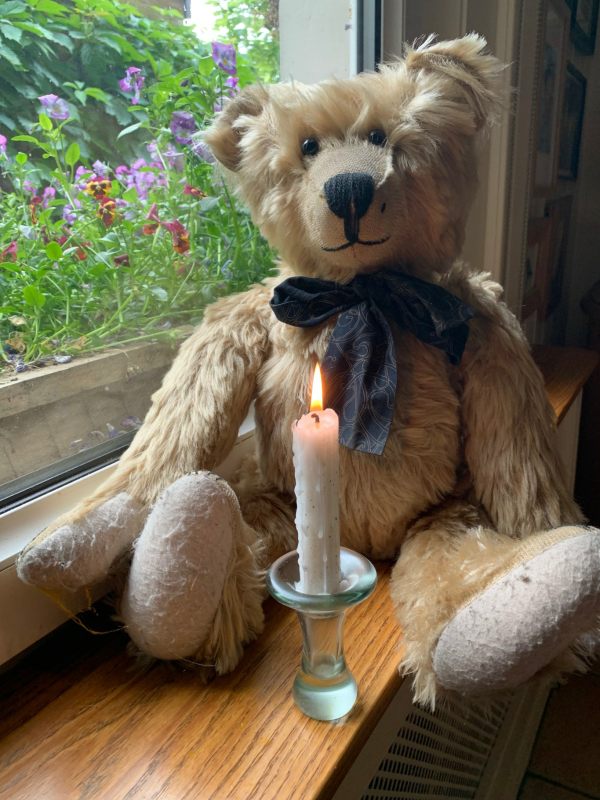