Once upon a time there was another Brompton in a box under the bench in the workshop. It didn’t move for nine years! In fact, it was only ever ridden twice. 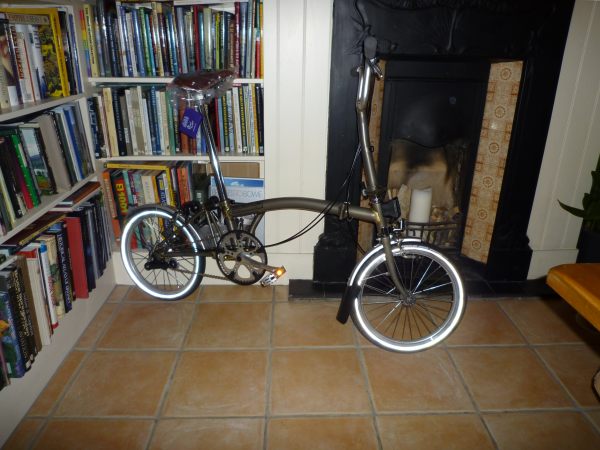 Back in 2010 Bobby had retired, but Diddley was still at work. And she was entitled to buy a bike under the firm’s ‘Cycle to Work’ Scheme. With “encouragement”, she entered the scheme and chose her own Brompton. They would now be able to cycle together into the sunset… and get a bus home with the bikes in the luggage rack. Now as we know, Diddley was a graphic artist. She knew all about colour. Pantones. And she chose Cornflower Blue. And then broke her ankle. A few weeks later, Pearson’s cycle shop in Sutton rang. “Your Brompton is ready for collection.” Off they went to Sutton. Diddley on crutches. Settling down al-fresco at a pub while he walked down the High Street. Shortly returning with a large heavy box. Excitedly, he opened the box to reveal the glorious blue Brompton.

“THAT’S NOT CORNFLOWER BLUE!” she said.

“IT’S NOT CORNFLOWER BLUE AND I WILL NEVER RIDE IT!” she said.

“DON’T YOU BUT ME. IT’S NOT CORNFLOWER BLUE. I am an expert on Pantones. It’s my job. The Brompton catalogue is a huge mistake. I have been conned into buying the bike from my wages and now the colour is not CORNFLOWER BLUE. You caused it. You sort it out!”

So Bobby entered into prolonged correspondence with Brompton bicycles. As you know, he does not give up. Eventually, he wrote to the top man. Will Butler-Adams. A few days later, the phone rang. “May I speak to Mrs Diane Ball, please?” “Whose calling?” “Will Butler-Adams.”

They chatted for a while and she seemed pleased. “Will is sending me a metal swatch to choose a replacement colour. He will deliver the chosen one and collect the blue one. He will also ensure that colour descriptions in the catalogue are accurate and remove CORNFLOWER BLUE altogether.”

He kept his word. She chose raw varnish anodised. Will was impressed. “That is our top iconic finish and cost £50 more than normal colours. You may have it with my blessing.” A few weeks later, the changeover was achieved. He wrote to Will to say thank you. 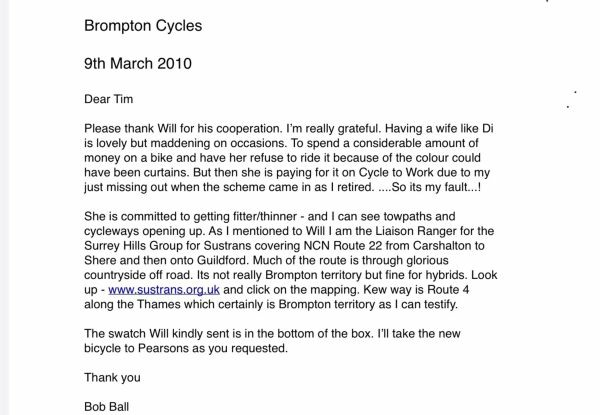 (The reference to Kew is because that is where Brompton’s factory is). 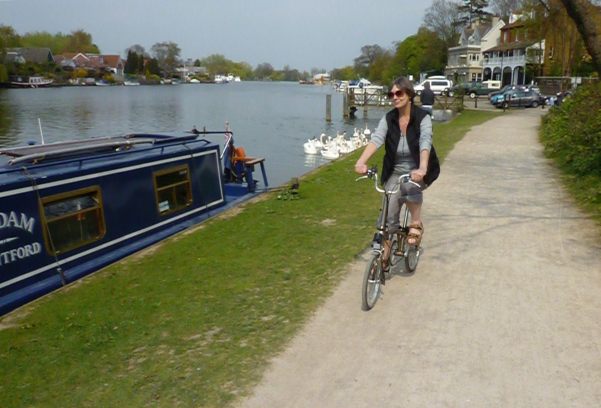 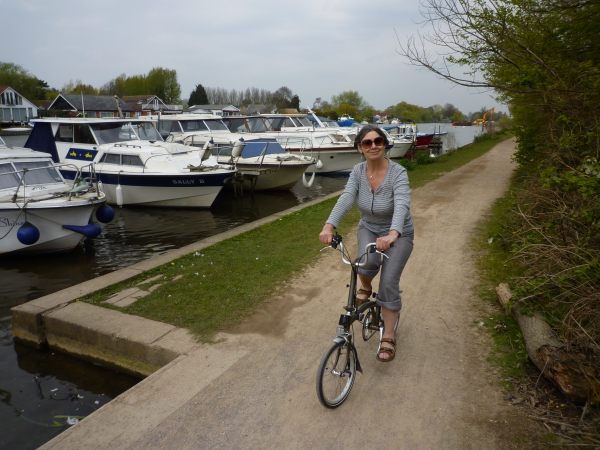 She rode that bike just twice. Both along the River Thames. Once at Walton, shown in the pictures, and once from Hampton Court to Kingston getting the bus back. Despite promises of more rides, the bike never left its box again.

Two Bromptons, one brand new. Stayed in their boxes under the bench. Both over £1,000 each. Bobby’s was ridden, as you can see from last Sunday’s story. His cardboard box eventually fell apart. Diddley’s just stayed there. Forgotten through all the years of dramatic events. Until one day recently, Bobby started to ride his Brompton again. And wondered what was the point of a brand new one in a box. So he sold it to Peter. 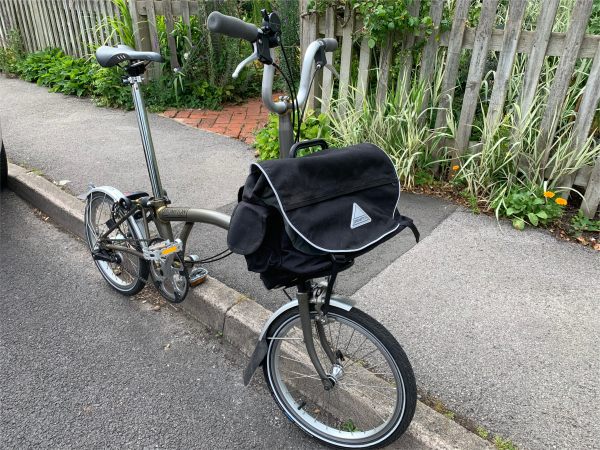 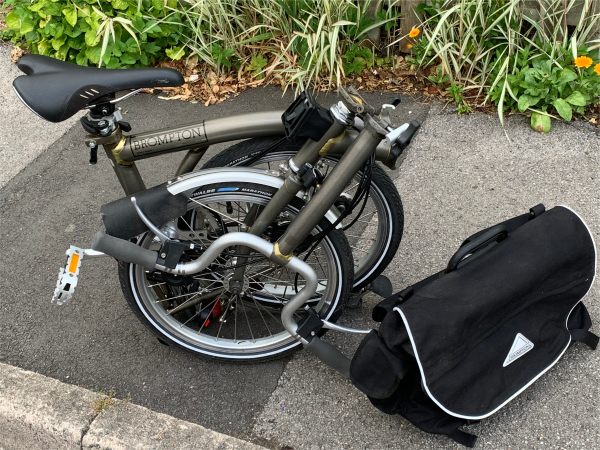 Waiting for Peter and a new start.

The cornflower is a familiar plant, evocative of a past era when they filled our cornfields with colour, growing alongside poppies and corncockles. Sadly, that was then. Nowadays they are rarely seen in the wild and have become a garden plant. But now they are part of the recent renaissance of our roadside verges. We are not just saving the Moondaisies but, in some places, creating new wildflower meadows in urban situations.

Cornflower Blue is distinctive and no photograph can be guaranteed to do it justice. You would need a Pantone expert like Diddley. As you know, Bobby and I went to Austria in 2017. One day, walking alongside a field of Barley, he was entranced by the numerous Cornflowers growing within the crop. The farmer’s wife was standing at the edge of the field.

He said “es ist schön”. She replied: “They are, aren’t they!” When asked why there were so many Cornflowers in the field, she told him why.

“Here in Austria, you buy your grain seed from a dealer. You have a choice. Just grain, or if you like beautiful things you can buy the grain enhanced with Cornflower seed.” 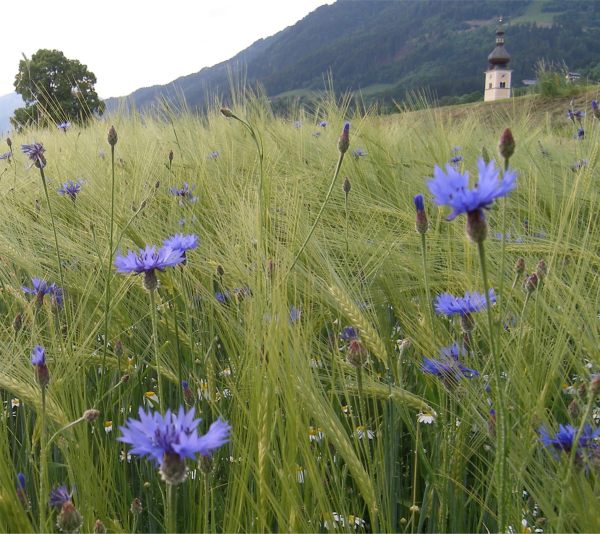 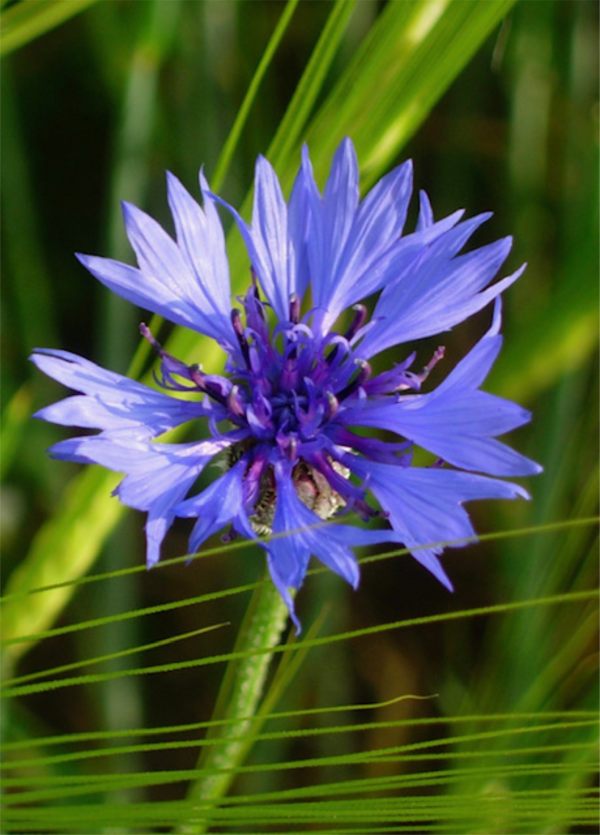 I Don’t Believe It. 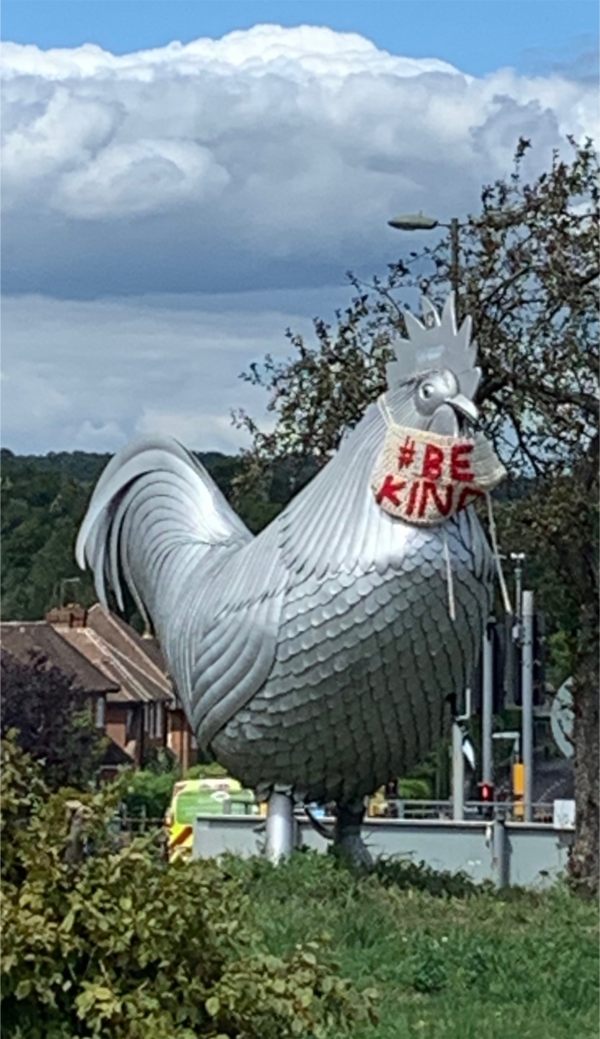 Dorking’s famous cockerel on the roundabout approaching the town now has a new facemark supplied in secret by the urban knitters. “# Be kind” is the message. Quite agree. 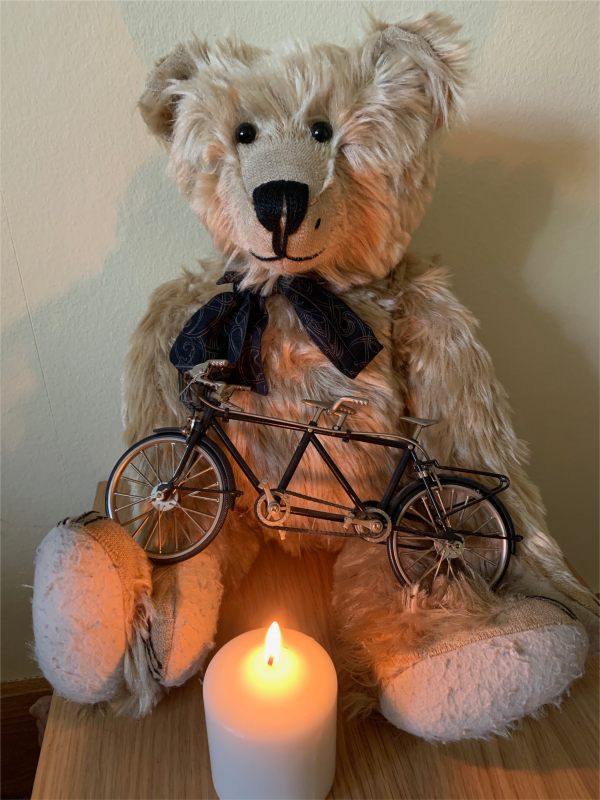 On a bicycle made for two.