We came to live in Laurel Cottage in 1999. Diddley already lived here. The house looked very different then. 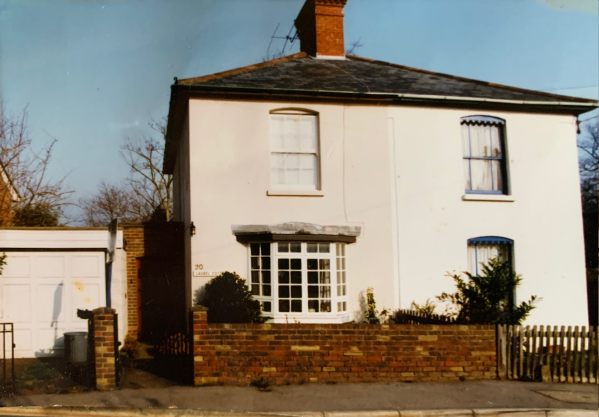 There was a garage. A ghastly wall and horrible windows. Growing against the garage was a white Clematis. Within a year, Bobby and Andrew had demolished the garage. Basically the entire frontage, garage, wall, gates, plants and concrete front path were demolished. Only one item was left. The white Clematis Montana. 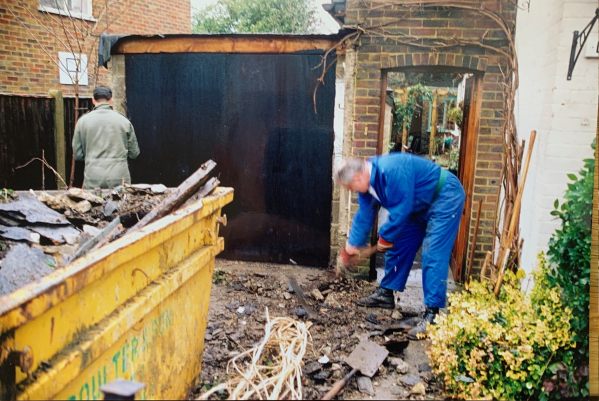 Demolition. The white Clematis lying on the ground next to the skip.

Bobby built a pergola and new picket fencing to enclose a restored Victorian style garden. The windows were replaced to be in keeping with the sashes of the era in which the house was built. 1870. And he built a Victorian brick path. 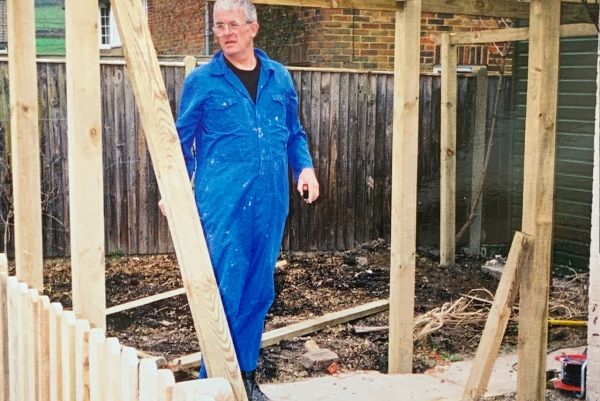 He loved that boiler suit. 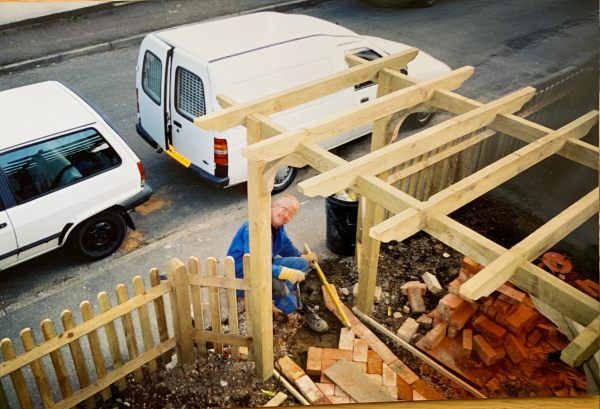 “I am going to build a Victorian brick path out of reclaimed Victorian bricks. These came from a reclamation site and had once been a Cheltenham town house”. Notice LWV (Little White Van). “Can you make it curved herringbone?” asked Diddley. Who knew he would. Taking twice as long and wearing out two angle grinders. The suntan is brick dust. A labour of love. 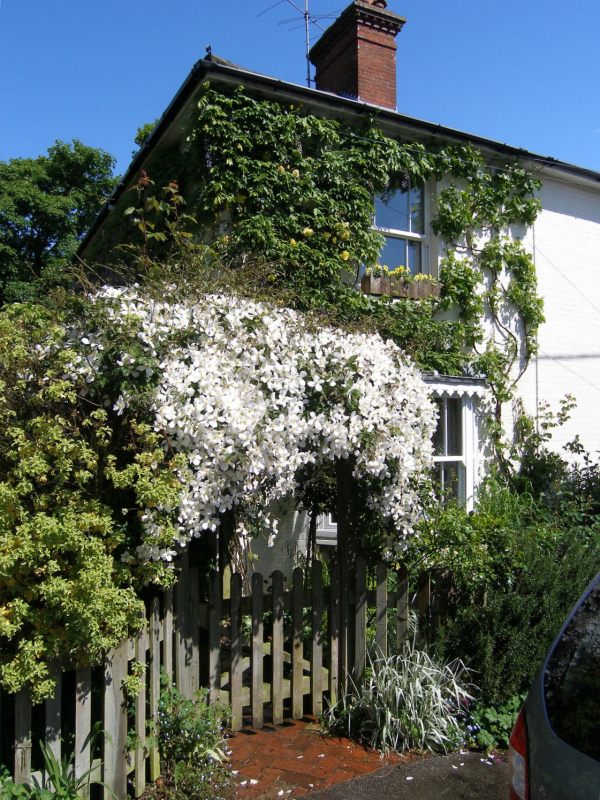 Over the following years he trained it to become the star of the early May garden, together with the Wisteria. This is 2009. 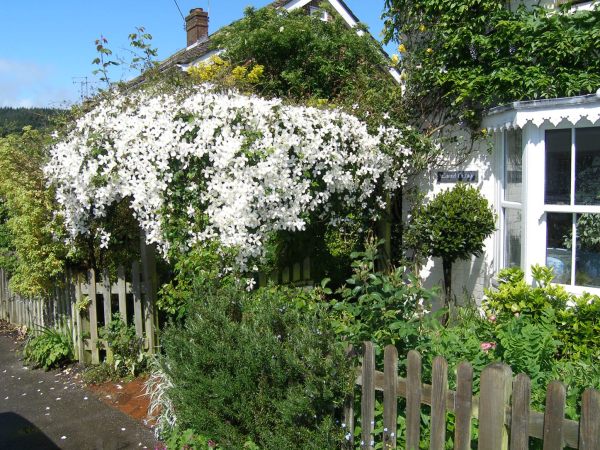 The years passed and we looked forward to Montana time. Many people had their picture taken in front of it, including Andrew and Marie for their wedding invitation. 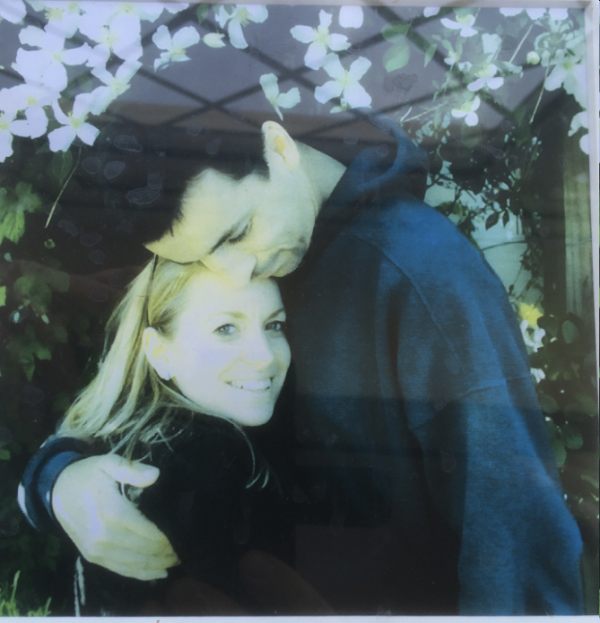 The love affair is in much better shape than the picture.
Andrew and Marie. 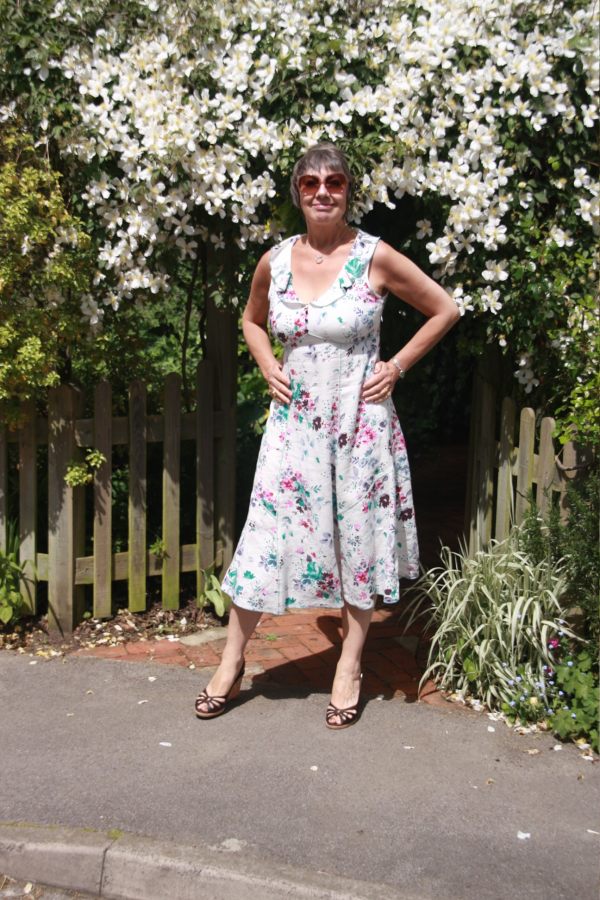 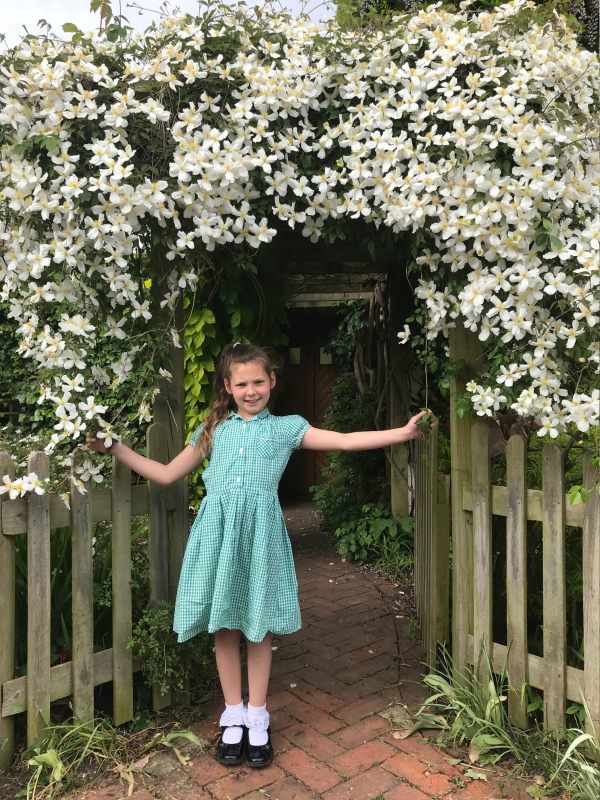 And then it happened. Winter 2020. The Clematis showed no new life. Visibly upset, Bobby watched week after week hoping for signs of new life. Nothing. By early April, he knew. It was dead. How could it be? Was it his fault? But then Bobby remembered the serenity prayer from Al-Anon (AA too).

God grant me the serenity to accept the things I cannot change.

That was it. Goodbye Montana.

Courage to change the things I can.

He set aside one of those glorious sunny days in early April and chopped the whole thing down. It filled three dustbins. Suddenly, the pergola saw the sun again. Still in perfect condition after twenty years. 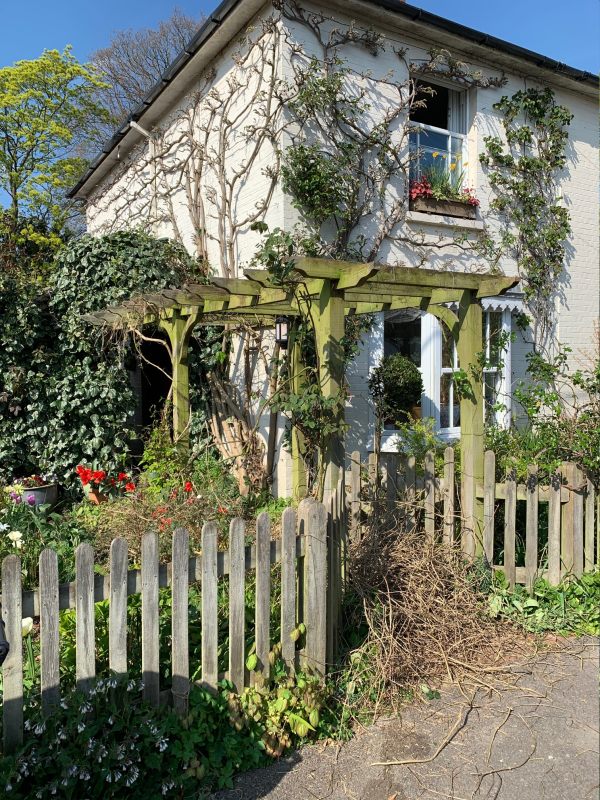 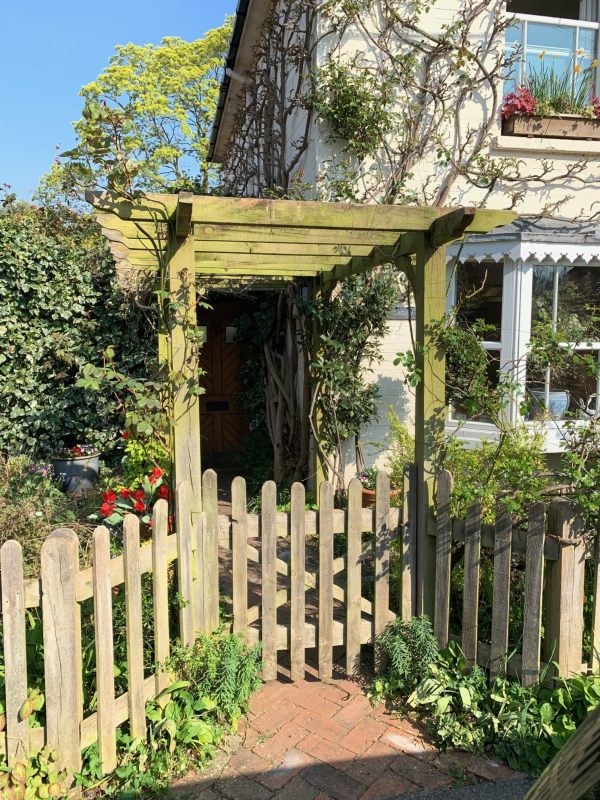 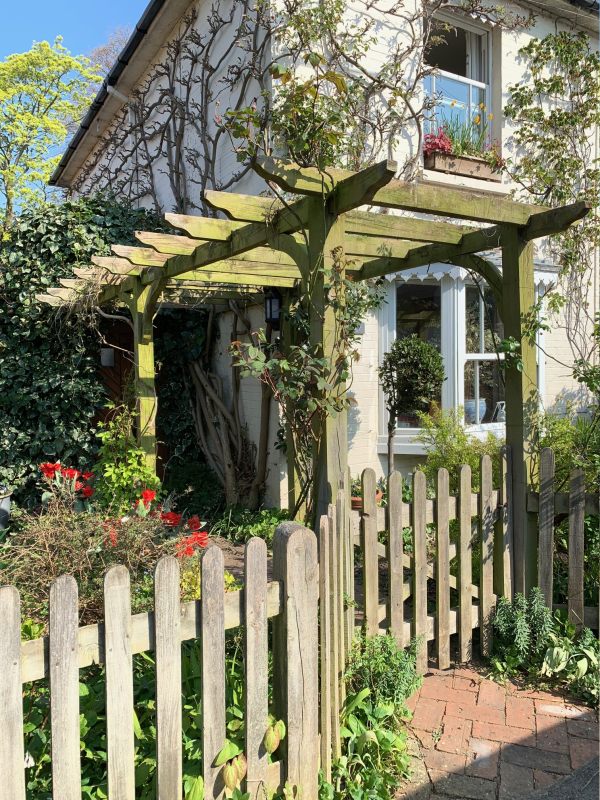 And wisdom to know the difference.

He used that wisdom to look forward, not back. The pergola is now a blank canvas. Two Climbing Roses near the front gate have been swamped by the Montana for years. Now is their moment. Further back is a vigorous Ornamental Hop. Humulus Lupulus “Aureus”. The Golden Hop. That will cover the pergola in a few weeks. And lastly, and most exciting, we can put two extra posts in to grow two brand new climbers up. Maybe a new variety of Clematis. Maybe a new Climbing Rose. Maybe. Who knows? We have until the winter to make our minds up.

So goodbye Montana. We loved you. Thank you for the memories. 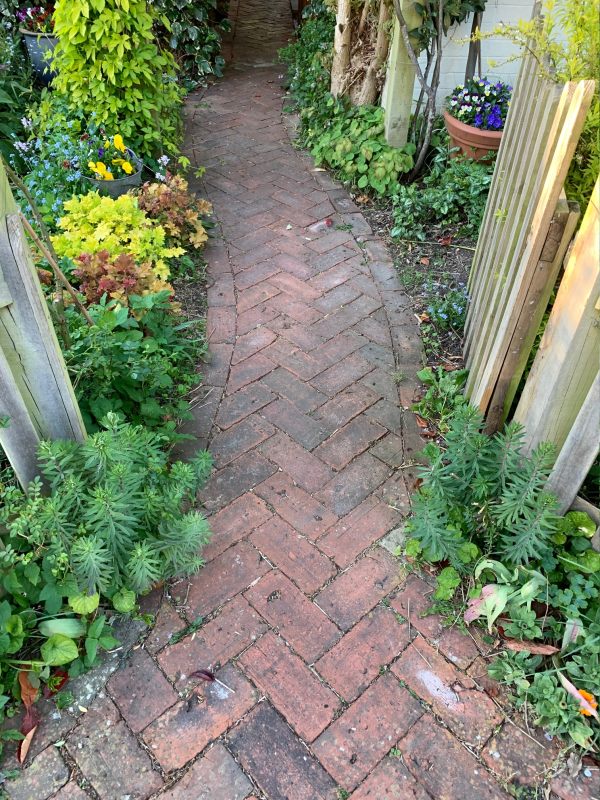 Al-Anon continues to operate for those whose lives are affected by someone else’s drinking. Physical meetings are suspended. Go to the Al-Anon website for the current situation. www.al-anonuk.org.uk. 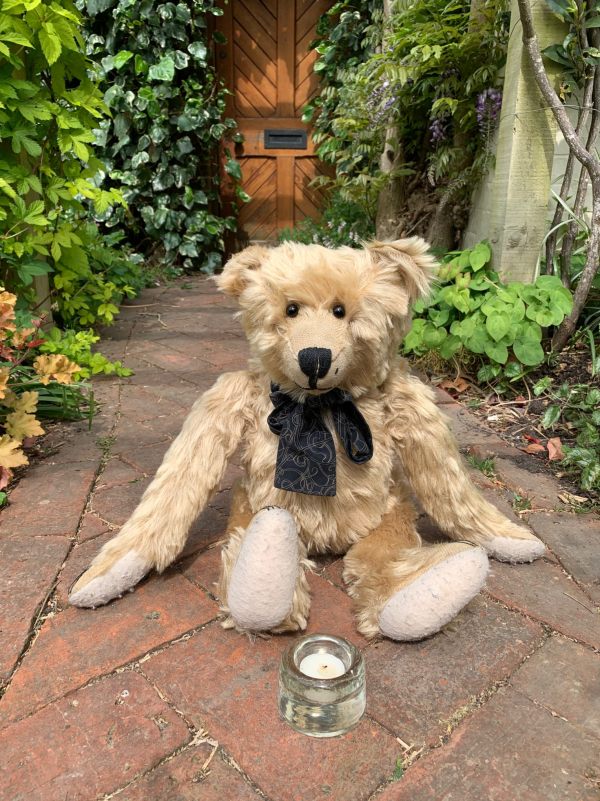 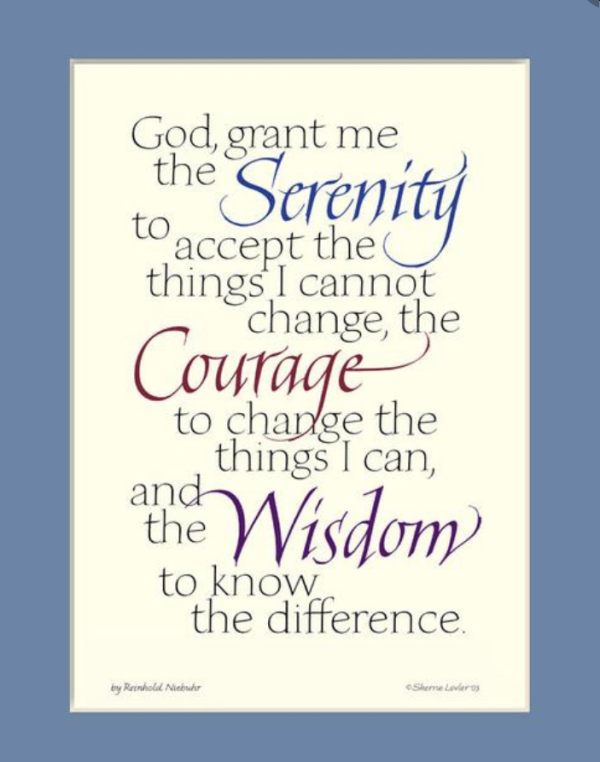