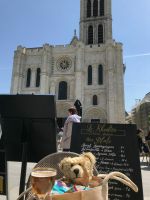 He couldn’t be bothered at first. With three young children shouting at him during a World Cup football match on television. But eventually succumbed and found this natural wonder in a hedge opposite.

Exterminate. Or “how to deal with a wasp sting”. Over and over again. For what use are they but to be exterminated. Now that’s not to say that if you were confronted with a wasp nest in your house you might very well exterminate for “elf and safety”. But why hurt a nest in a hedge that is not bothering you. Particularly when you discover that these are FRENCH WASPS. Ooh la la.

There are countless species of wasps. Some do a lot of good. They pollinate flowers – as bees do. They parasitise other insects and kill them. Gardeners will know of parasitic wasps you can buy for your greenhouse that will lay their eggs in white fly larvae and clear a greenhouse of the pest. They can also make the most beautiful creations in the natural world.

This is the reply Bobby got when he asked his National Trust friend who asked an expert friend:

This is one of the Dolichovespula species of wasp (sometimes referred to as the ‘long-cheeked’ wasps, because, well, they have long cheeks). We have four species in the UK and this is probably Dolichovespula media, or the French Wasp, a species that arrived in the UK in Sussex in 1980.

The colony won’t last for much longer – once the resident queen has produced her daughter queens (next year’s queens), the colony will peter out, probably by the end of August or early September. And they won’t reuse the nest, so will be gone soon.

So enjoy it while you can. Bobby has done. He took me over there with Kyla and got stung for his troubles! The nest is gradually showing signs of wear, but is still a miracle of construction by an insect chewing plant material and making it into paper in a form of compartments and this beautiful exterior.

In the wonderful Basilica of St Denis in Paris.

Just had to poke his nose in, didn’t he!