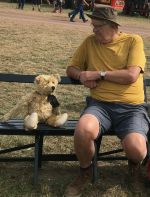 Glorious showman engines. Over one hundred powering the steam fair.

Bobby had stretched out our hospital adventure to a whole week, centred on the Travelodge at Ilminster. In doing so, he could hardly avoid the signs to the Great Dorset Steam Fair (GDSF) for the following few days.

Everything about the GDSF is gigantic. Including the traffic jams to get in and later to get out again. Many choose to stay the whole four days in the vast camping/caravanning and motorhome fields. “Fields” being literally farmland under crops not long before. Glorious chalk Dorset rolling hills north of Blandford Forum. In the past there was a “Glastonbury” air of uncertainty as to whether the fields would be a swamp or dustbowl. Nowadays they don’t sell many wellies there.

Bobby has been there many times. Taking Diddley the last time in 2002. He will never forget 1997, which is saved to the end.

To save an enormous blog here is a 35 minute video from the Great Dorset Steam Fair that should satisfy your curiosity:

Plus the GDSF’s take on the first World War:

Enormous statue out of metal scraps.

Believed to be the oldest surviving First World War lorry.

This week’s story is just one tiny aspect of a day at the Great Dorset Steam Fair.

Gigantic it may be, but where to sit down and have a rest?

(Like now we are sitting by the Regents Canal at Camden when, coincidentally, this simmering beauty puffs by.)

Writing is where you feel most comfortable in your mind. But does mean using a mobile phone, or a pencil? Old age and arthritic hands make electronic writing a far more desirable thing.

So where to sit at the show?

Number one. Watch a show. A show being a travelling fair, or old time musical. Before radio or TV had been invented. The fairground organ, powered by a steam engine. The girls, very presentable, and the Master of Ceremonies a bit of a clown, who included me in his patter. Not surprisingly, the girls insisted I go on the stage with them to be introduced to the audience. Say 12 souls. The real magic is after dark.

“Heavy horses”. A world away from the 500 steam engines in every direction. The GDSF has large stables on the downs just for the fair.

“Heavy horses” who worked the land and pulled the carts long before steam, petrol, diesel and satellite navigation (for a modern ploughing tractor) took their place.

“Heavy Horses”. The beasts of burden. The tractors and the lorries, rather than their exotic Ferrari and E-type cousins tearing passed Tattenham Corner.

“Heavy horses” who worked for their keep or ended up at the knackers yard.

When Bobby was young, there were far more horse driven vehicles. The milk float, the baker. The rag and bone man. Back in the days of “Cider with Rosie” virtually all vehicles were horse drawn.

The horse knew the route. The local children were sent out to collect the “goodies” for the roses. Returnable milk bottles. Before supermarkets.

But here at the GDSF, the heavy horses are revered for what they truly are. Magnificent, enormous and yet gentle, humble creatures. Some now rare breeds, when once there were thousands.

Here at the GDSF, they had one thing in common. They were all in harness, pulling a multitude of vehicles. There were Shires, Clydesdales, Suffolk Punches, Percherons and enormously impressive Canadian Belgians. We have forgotten which is which, so you will have to just enjoy the pictures as we do.

Our trip to the West Country took us back nostalgically to many other places. One such was the Somerset village of Kingsbury Episcopi. A wonderful community shop and café and the chance to light a candle in the historic church of St Martin.