The Man Who Talks Too Much 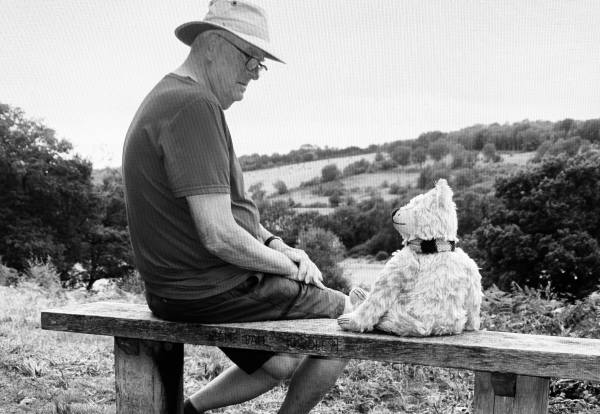 Bobby talks too much. Everybody says so. He gets on their nerves. And his own. Wears them out. Bores them silly. Causes them to drive by. Cross the road. Hide. Anything to avoid him. Not because they don’t like him. Probably. But simply they haven’t got the time or patience for his incessant chatter.

Electronically, he is easier to contain. ‘Delete’ is a possibility. But you might miss a little gem. A single emoji reply is Andrew’s answer. Or ‘pending’ others. And some dear friends love him for what he unashamedly is:

The man who talks too much.

Mrs Maddox christened him ‘Big Mouth’ at Cheam Park Farm Juniors and gave him honeycomb toffee as a reward. Wrote a letter to his mum to say how much she would miss his chatter when he went to the big school.

The big school saw him spending excessive amounts of time in the corridor for ‘talking in class’.

His thirty years ‘career’ at the insurance office drew to a close shortly after boss Roger warned him: “Bob, we all agree with how you feel about the management. But only you actually say it!”

Even Diddley emailed the office they worked in to say. “I dreamt of meeting a knight on a white charger who would rescue me. And got white van man in a flat cap and boiler suit. I used to avoid him at the tea point because he talked so much. So I married him and will live happily ever after.”

After nearly 78 years he is not going to change now, and the advantages of talking too much still outweigh those who don’t. And here is why. As he lies in bed at four in the morning talking too much to his iPad. A bed in a former dairy in Suffolk.

It was a glorious summer afternoon at RHS Wisley Gardens. Finally accessible after months of Covid restrictions. We were going every single week. Featured many times, of course, in Mindfully Bertie. A particular favourite looking back is this story which we would ask you to read again. There were two other people admiring those Wildflower Meadows that late afternoon. June and Nic. 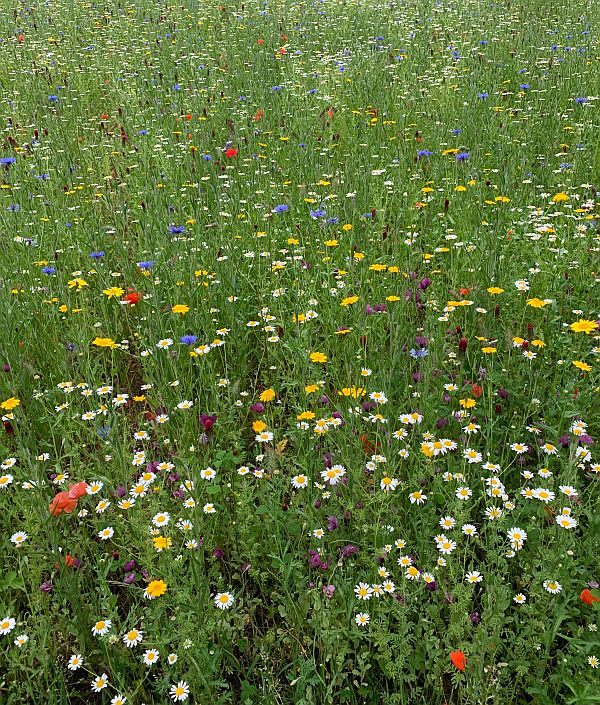 “Isn’t this beautiful? And nobody here.” they agreed.

“Where do you come from?”

“Not far away. Near Dorking.”

“We come from Suffolk.”

“I love Suffolk. My last holiday with my dearly departed wife was in Suffolk, near Orford.”

“We live near there, close to Framlingham. In fact, we rent out a cottage. Just for two. Would you like details?”

Three months later, three bears and Bobby are here. The directions included: “Go past Parham Airfield”, and the rest is history. The man who talks too much has even more stories to tell… 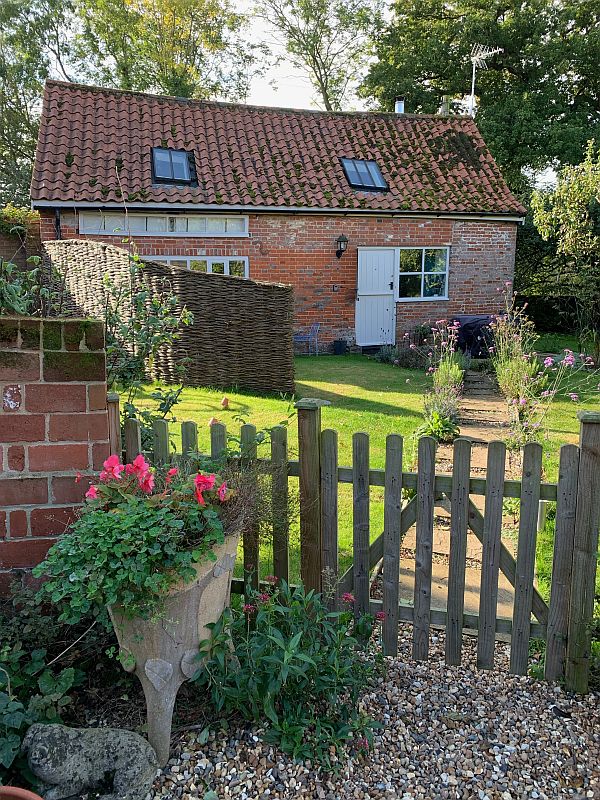 Simpers Drift cottage. A former dairy, set within the grounds of Nic and June’s farmhouse. 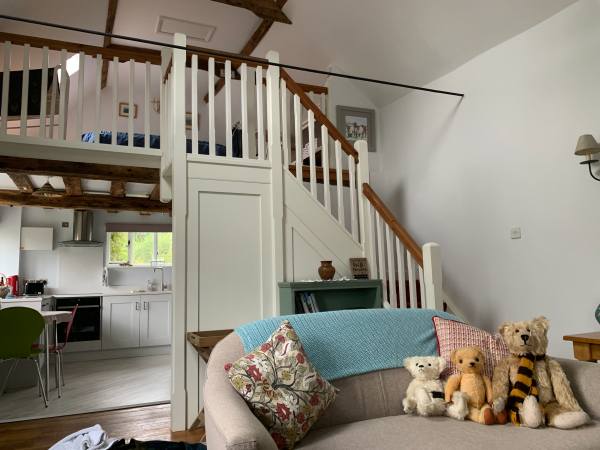 Romantic hideaway for two. Also perfect for one man and his three teddy bear friends (Trevor, Eamonn and Bertie)! 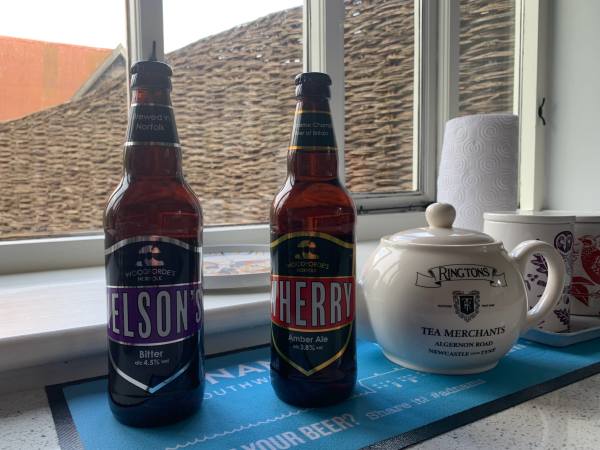 Nice welcome touch. They stayed unopened. He having lost interest in beer. 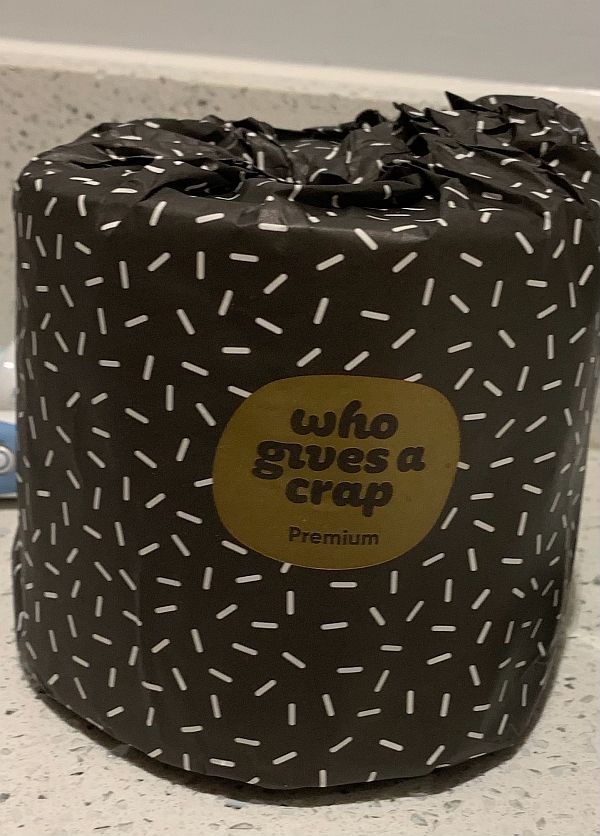 Have a look at the website. You could be very surprised. 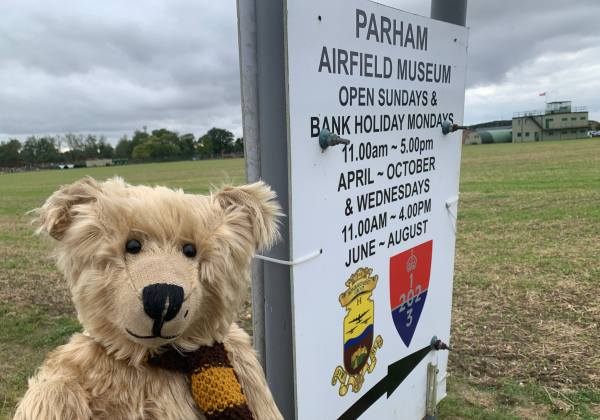 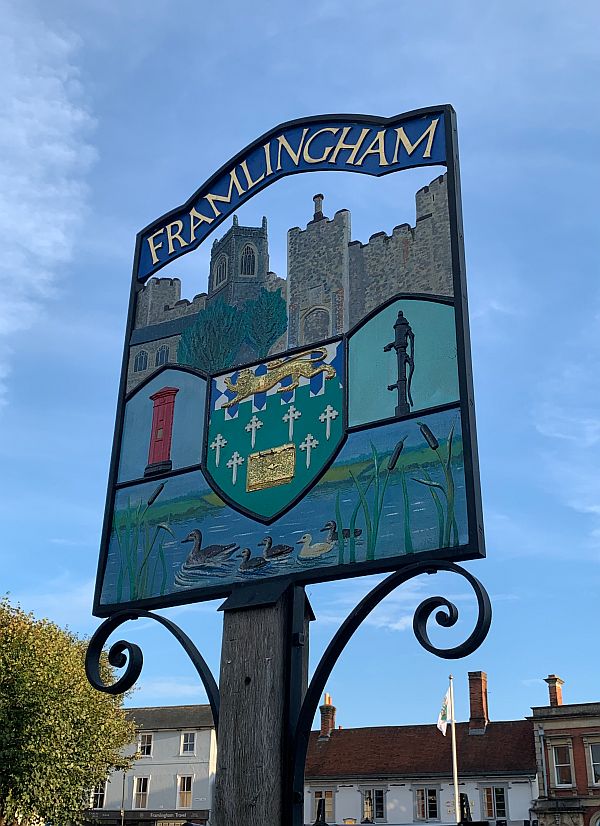 Framlingham. Next time we will go to the castle and tell you all about it. This time we went to Sutton Hoo and will tell you about that instead.

But, of course, talking too much is only of value if you also listen. In that way, you will learn more than you could ever imagine. Bobby would be the first to admit that, in the past, his eagerness to talk left listening at a disadvantage. The principle is at its most effective in a fellowship like Al-Anon. Or indeed AA.

These fellowships exist to help people find serenity through sharing their experience, strength and hope. They are not discussions. Members do not crosstalk during the meeting. By which we mean they don’t comment on another person’s share.

Basically, a meeting is sharing life’s dramas. You speak just once. Maybe timed, to give everybody a chance to share, and for the rest of the meeting you listen. It’s a wonderful discipline for people like Bobby. For him, Al-Anon is a way of life now that he could not live without. 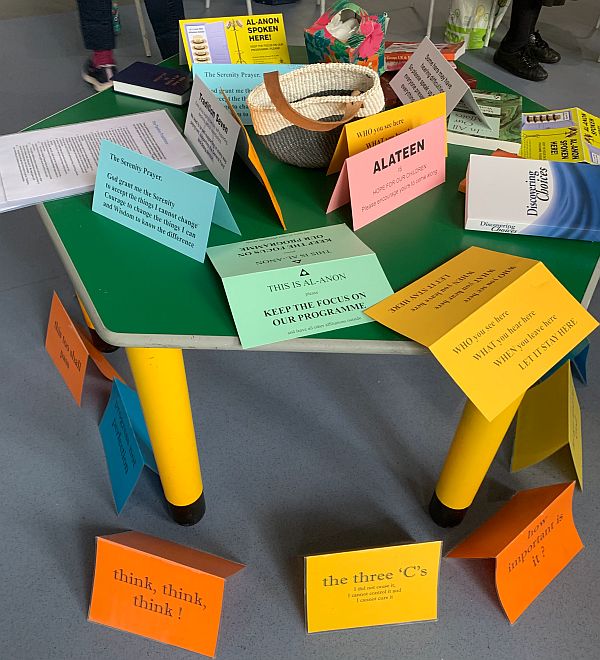 We can’t show you an Al-Anon meeting as anonymity is the most important principle. People share their most personal concerns and can only do that in a safe environment. But they are colourful affairs. Often with laughter. Sometimes with tears. (See tissue box). There is literature, slogans, the Serenity Prayer. A few rules. ‘What you see here. What you hear here. Stays here.’

He has never left a meeting without feeling better than when he joined it and has learned more about true life than you could ever imagine. And the whole thing is paid for by voluntary contributions. Hence the bag. What you can afford? If that is nothing, that is perfectly acceptable. 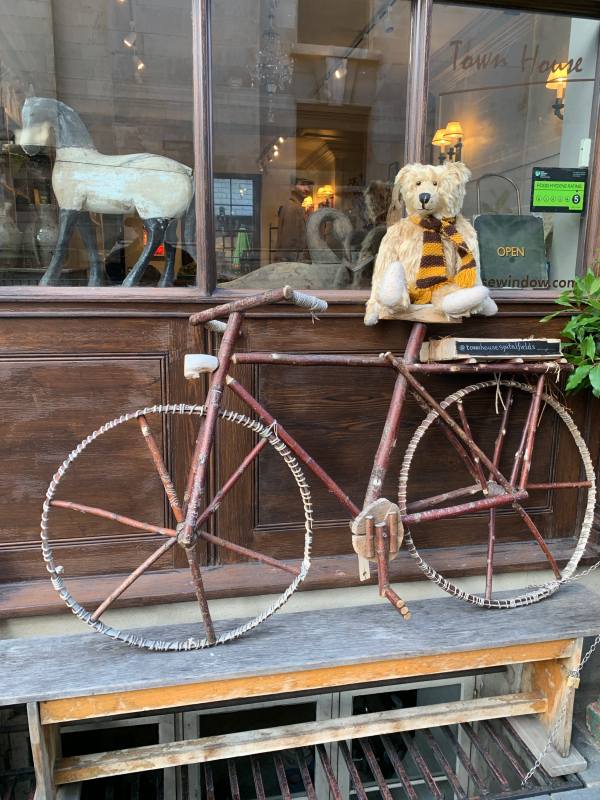 Last Sunday in the Townhouse, Spitalfields, he realised how far he had come. A weekend course for writers of blogs with the Gentle Author was ending with a day of talking and looking at each other’s work. By chance, Bobby was last of seven people. Listening contentedly to the rest, his principle was to relax. What would be would be.

Don’t miss what you went for in your haste to get your own words in. It was all so different from years ago. 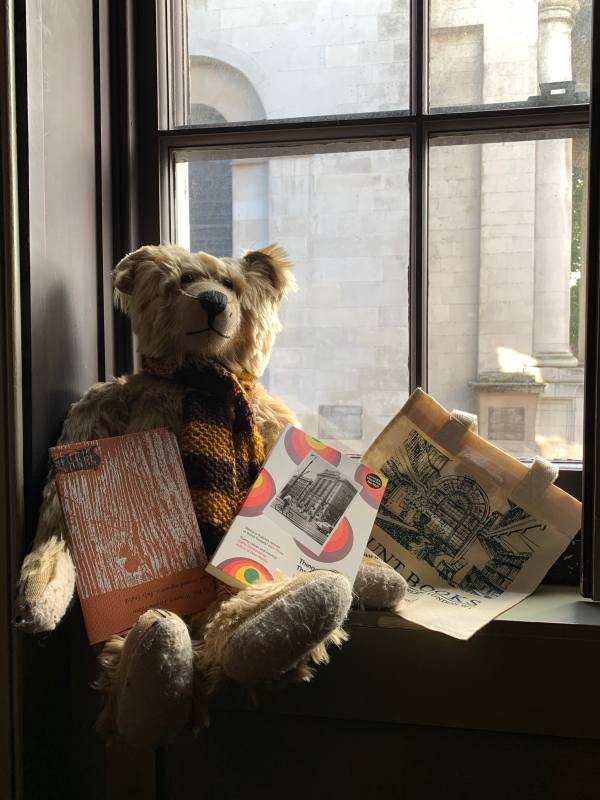 Townhouse. We even had presents from the other writers.

The Doctor Who Talked Too Much

A few days before our adventure in Spitalfields, he had two doctor’s appointments. One at the Health Centre for his third booster jab. One at his local surgery.

The first was timed strictly at 9.04. Don’t be late. At 9.20, our friendly Doctor B stuck his head round the corner. Doctor B retired, but vaccinating all his old patients.

As friendly as ever, and as late as usual. We had all accepted over the years that appointments would never be on time and never be rushed. If he talked too much, we didn’t care. We trusted him.

An hour later, Bobby took me with him to see his current Doctor. Doctor L just wanted to check he was OK after falling over.

Doctor L: “I am sure you do!” Smiling, as we looked at the 2021 Mindfully Bertie Calendar on the surgery wall.

Doctor L: “I must say, Bertie, that if your blog has helped one single person then it’s all been worthwhile. But I can assure you it has helped far more than that, including Bobby himself.” 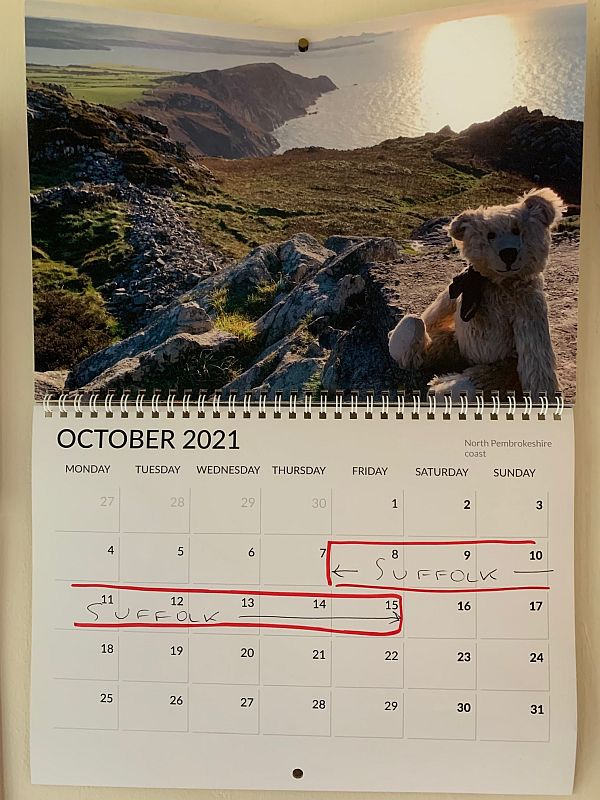 As we walked home Bobby came out with a typical comment.

Bobby: “I bet the doc has a drawer full of calendars and gets yours out if you are coming to an appointment!”

Bertie: “Bleedin typical. You have just heard someone say something nice and you have to spoil it. I don’t bleedin care. It’s on the wall and that’s all that matters! Miserable git. Are we doing a 2022 one?”

Bobby: “We start preparing the 2022 calendar soon, with all new pictures from this year. The plan is to send them to those supporters who got one last year.”

If you didn’t get one last year, then let us know. Soon!

Just as this story was ready to post, we heard this word. Even Robert Elms of Radio London admitted he had to check the dictionary for the exact meaning. It could mean talking a lot, or too much. Depending on your viewpoint.

Radio London is the BBC’s biggest local Radio station and Robert Elms the most successful show on it, with half a million listeners six mornings a week. But then, to the chagrin of The Robert Elms Appreciation Society the BBC axed it and other shows for a complete rethink on programme structure.

Robert’s show is different. No politics. No current affairs. Just a few hours of music, interesting Londoners and guests and a very different feel-good factor. He is a true right-ho mate Londoner, whose show was so important during lockdown. The word ‘diversity’ slipped in and the Appreciation Society slipped out in true disappointment.

They gave Robert a new slot of just Friday, Saturday and Sunday morning. The same show exactly, in just three days. The same old ere mate Robert. The Appreciation Society gave up the rest of Radio London to save themselves for these three days.

As we drove towards Sutton United to buy a ticket, we heard Robert come out with ‘loquacious’ and thought that this was a word we needed for this week. And then he played one of his regular features. ‘Cover to Cover’. Two versions of the same song. Listeners vote for their favourite and why. Loads of people rang in. Bobby was reduced to tears. And here it is…

Loquacious or not, Bobby and Robert Elms are on the same wavelength.

Lighting a Candle for Diddley, for Amber and for Peter 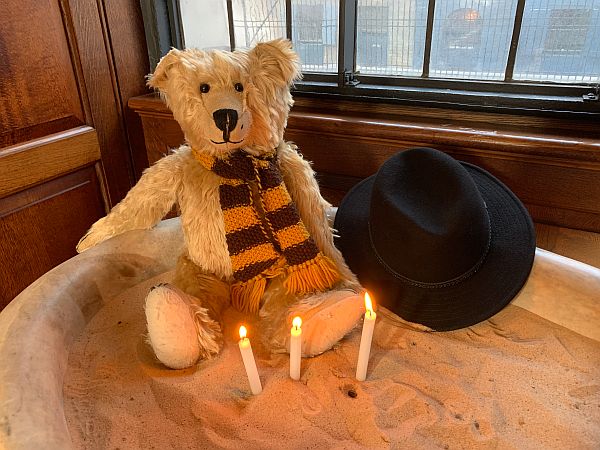 Mindful     talks too much