A year ago this week, Bobby and I faced a New Year on our own again. The previous months of funeral to Christmas a blur of activity. Now we could prevaricate, feel miserable, close the door for a while. Which is fine for some. Bereavement is as unknown quantity. Bobby decided on action. Started to think that beyond heartbreak is unplanned for freedom. The chance to carry on life doing things he could not have done otherwise. One being touring Europe by train. To break the ice, he booked Eurostar to Paris the following May. Continental Railway Journeys, here we come!

Back in January that seemed a long way off. An admirer of the Gentle Author’s (GA) blog … Spitalfields Life … he considered an offer within that to take part in a course. How to Write a Blog that People will want to Read. Talking too much and writing had always been his forte. But never fulfilled in something tangible. He decided “yes” and told Kim and Tony. Artistic, musical friends what he intended to do. Dear Tony came back. “Bob … your enthusiastic recommendation of Spitalfields Life has led Kim to book the January course. Much as she loves you, the idea of spending two whole days in your company whilst hoping to learn from a course does not appeal. How about you go in May?” “…….Dear Tony. Not only do I totally understand, but hope I don’t run into me in May either!”

The GA was happy. The course was booked. Just four days before Bobby took up his Eurostar ticket. 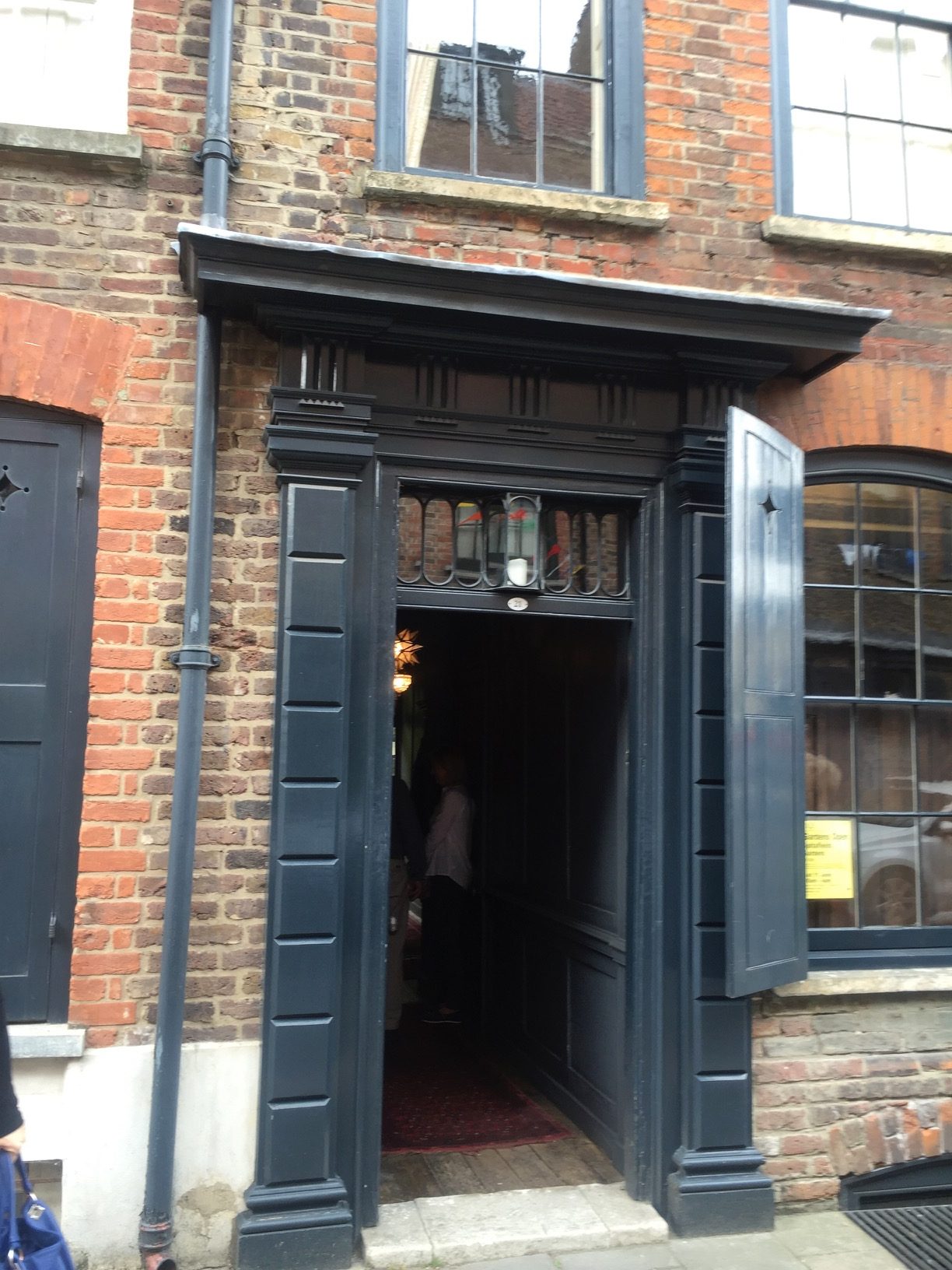 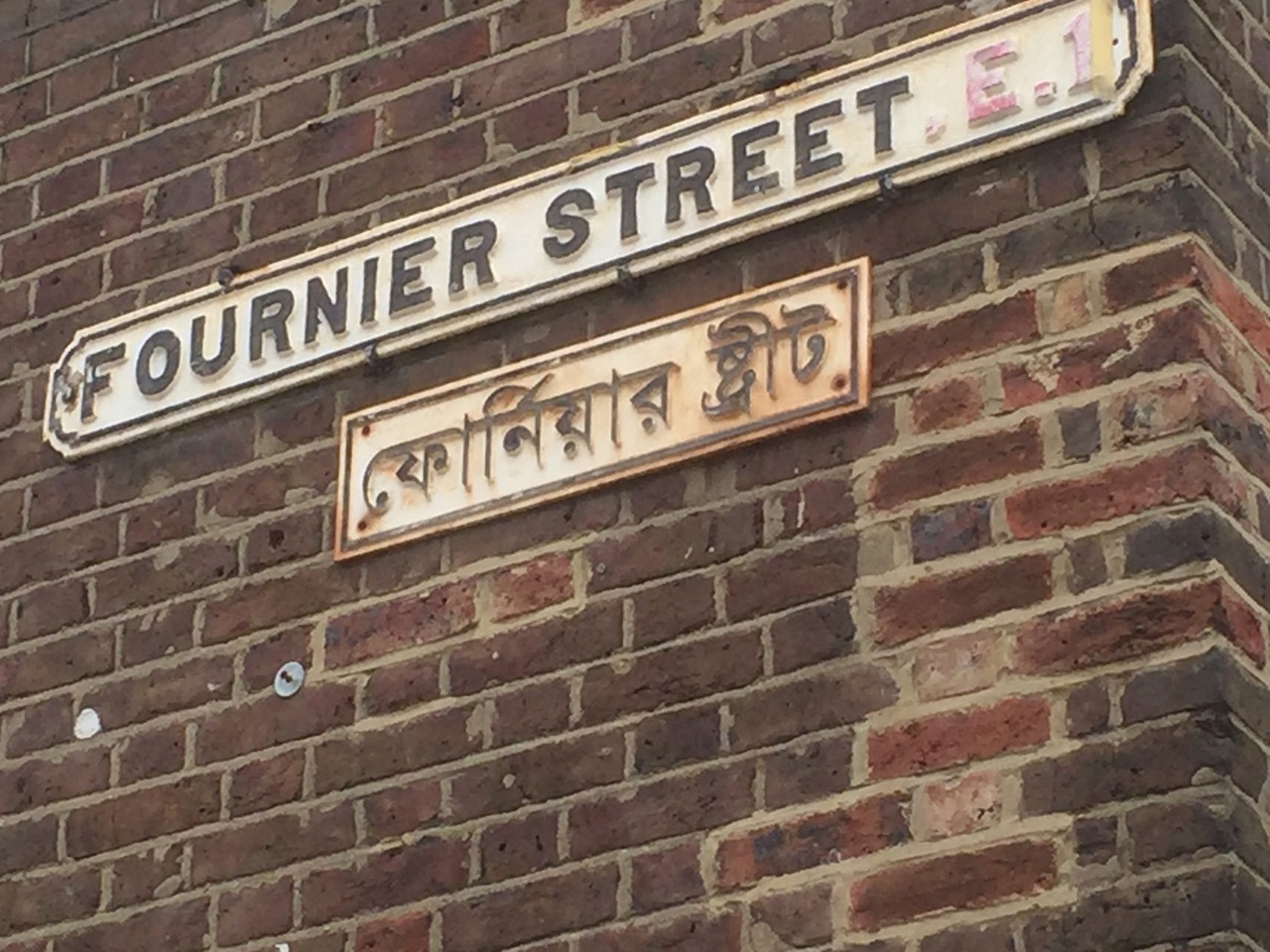 Twelve creative souls joined the GA in atmospheric Fournier Street for a memorable weekend. The first morning, Bobby had no idea what to write a blog about. By Sunday evening the embryo idea had been planted. The blog would actually be written by his bear friend Bertie. Me! The GA came up with the name. “MINDFULLY BERTIE”.

Back in Laurel Cottage, everything had been packed ready for the adventure. Including the red rucksack. Suddenly I was going to Europe! The bag was emptied and became my transport for the next month. Both of us heading off into the unknown. Excitement mixed with a little apprehension that all the planning would work out. Missing Laurel Cottage garden at its springtime best. 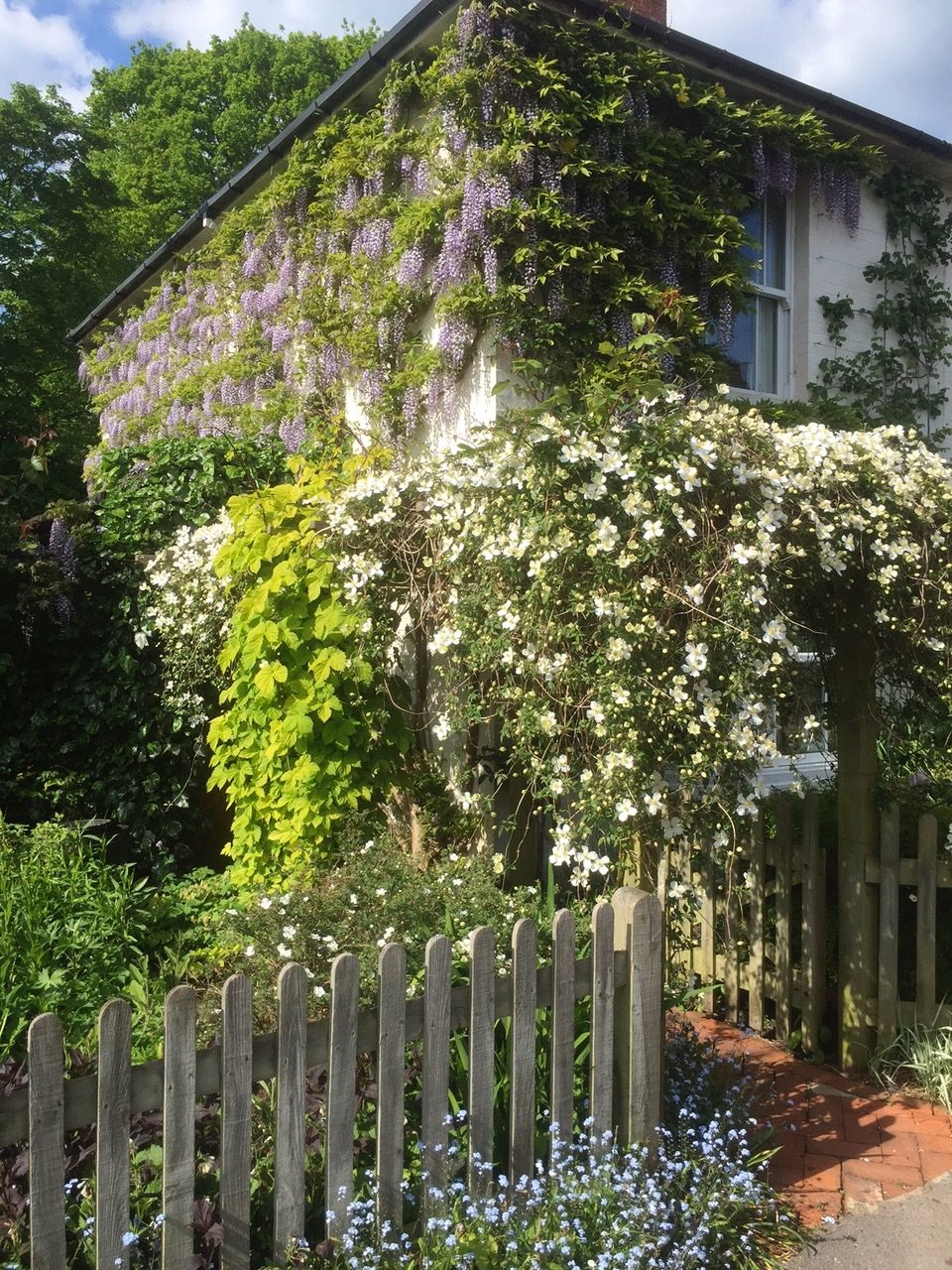 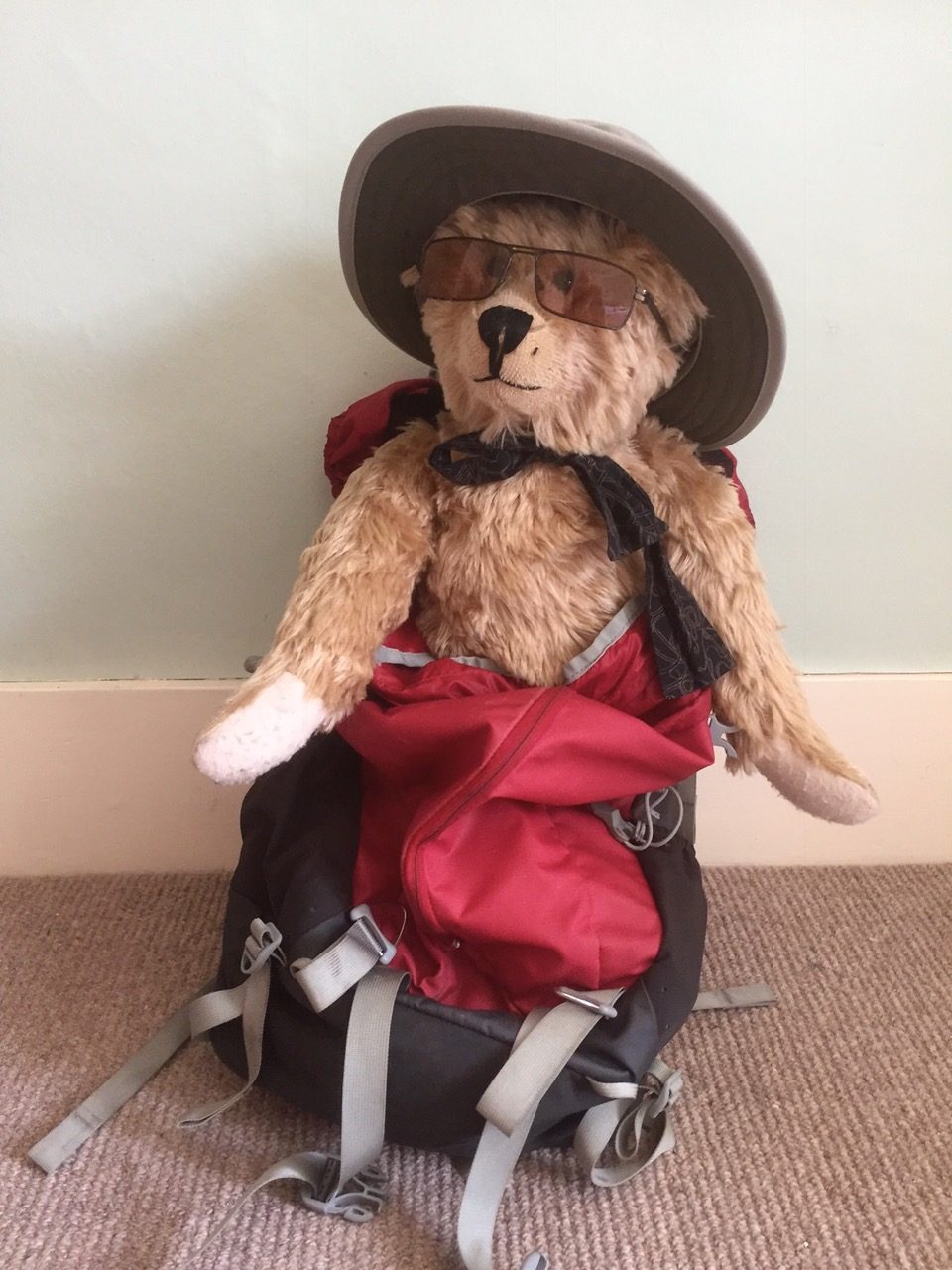 All packed and ready!

Leaving day came. The start of our Continental Railway Journeys. Thankfully, Southern were still running a railway then. Vauxhall… Kings Cross… St Pancras. Eurostar trains above. Bobby finally about to go through the Channel Tunnel, for the first time, an hour and a half later. Bobby’s OCD gets you to stations early.

Time to kill. Harry Potter… Platform 9¾. Queues of every nationality. Is he the most famous person in the world? When J K Rowling started writing her stories in an Edinburgh coffee shop she could have had no idea where it would lead. 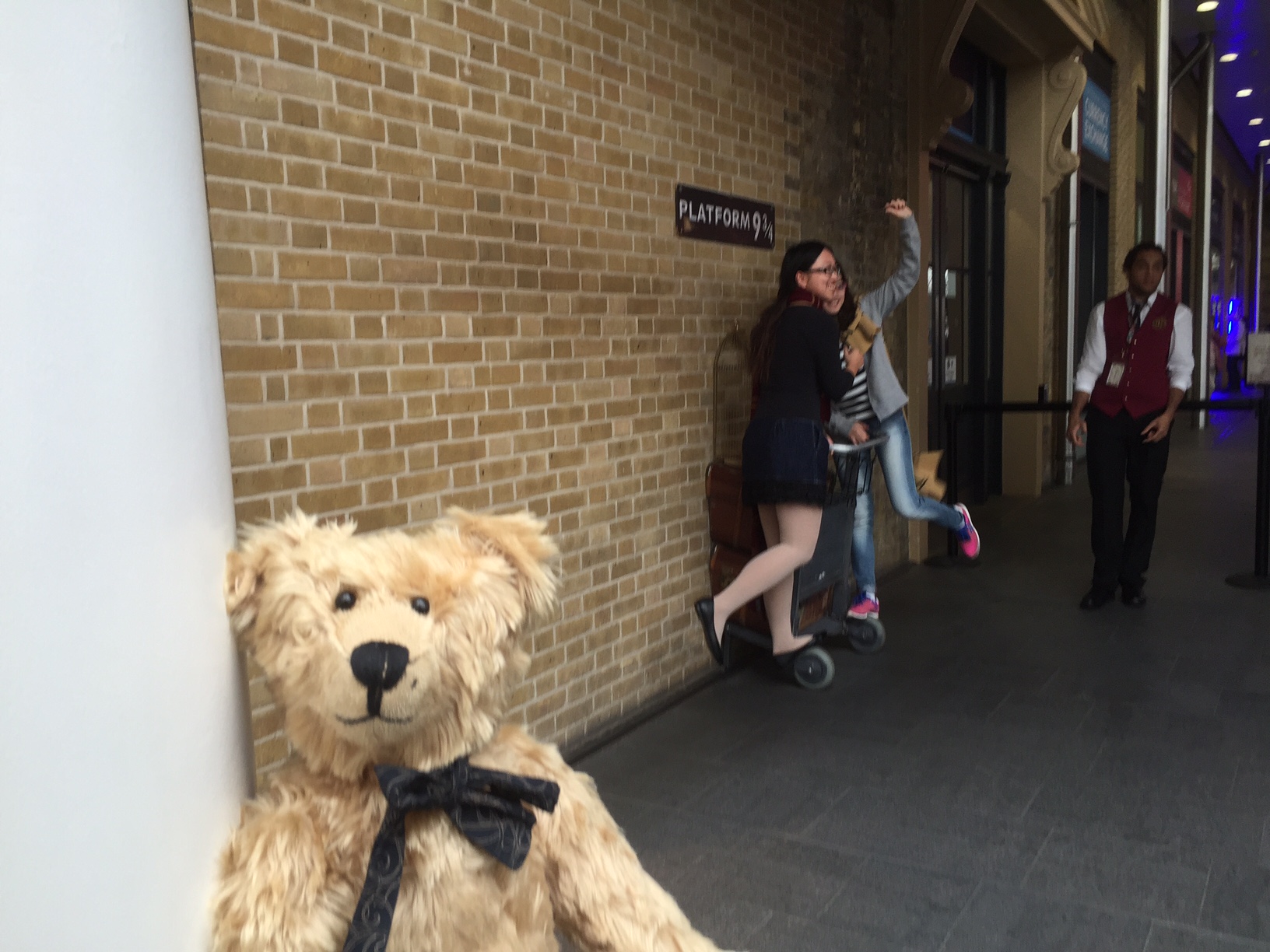 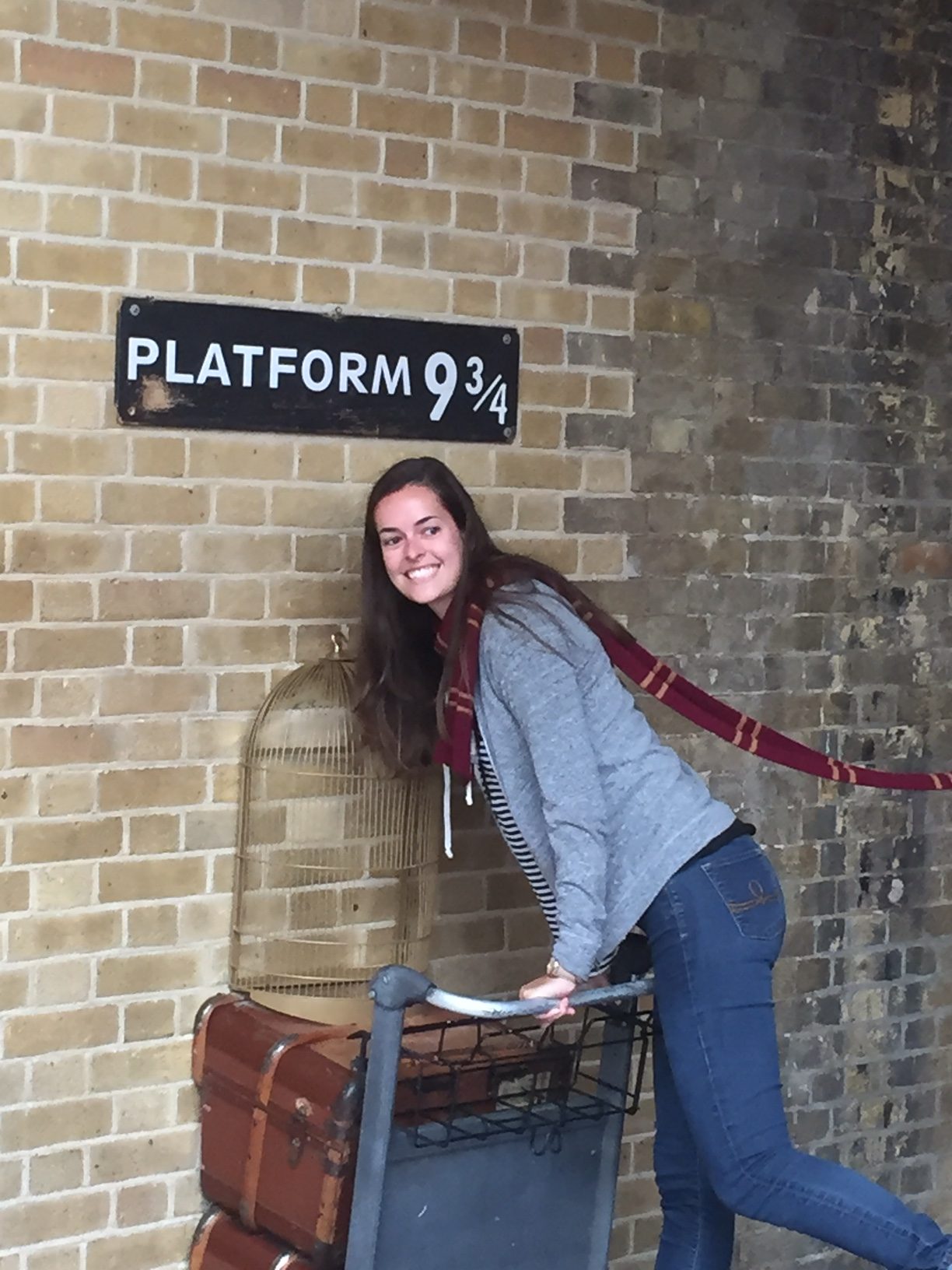 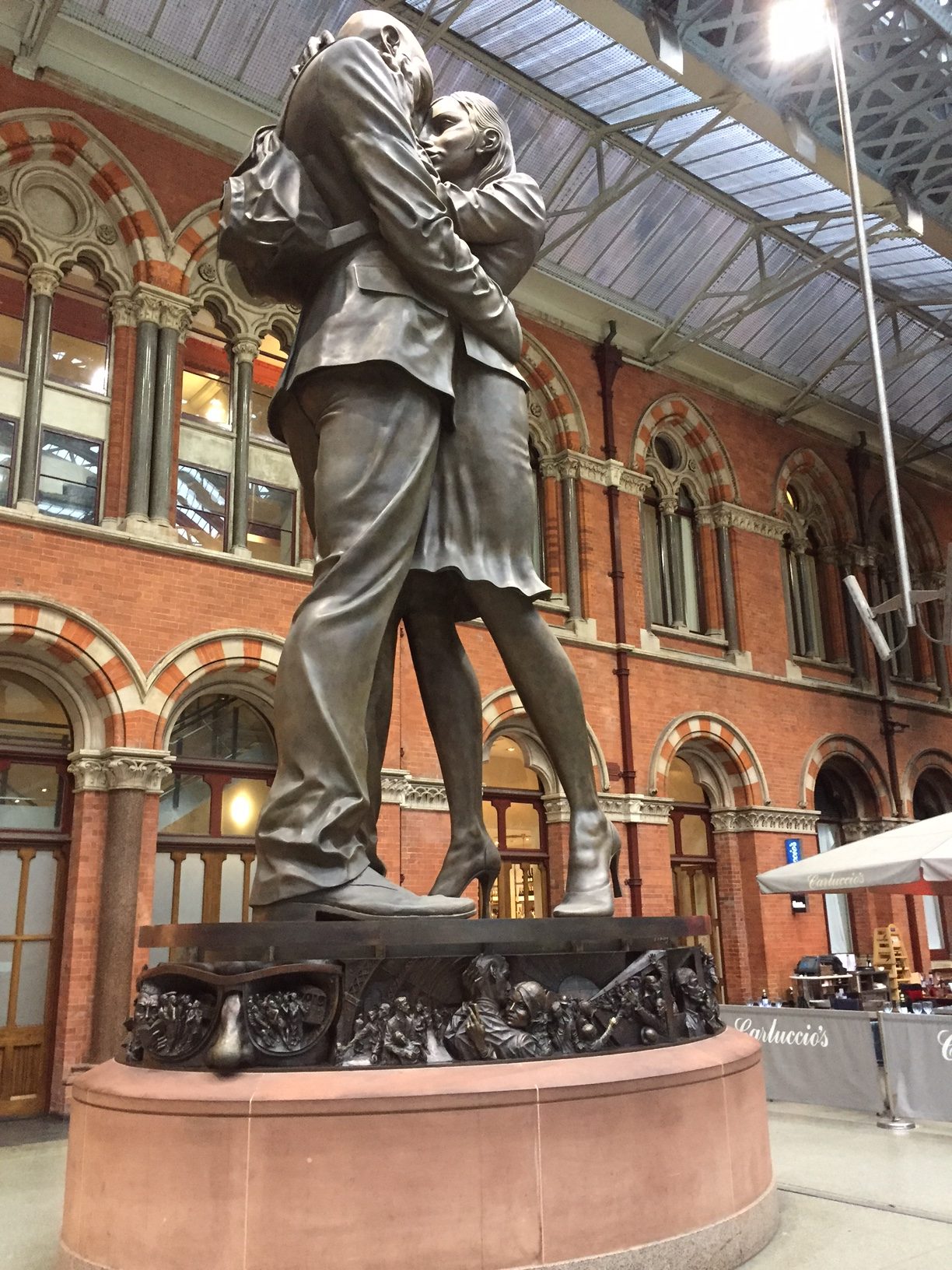 The enormous statue of the lovers that I refused to have my picture taken by. 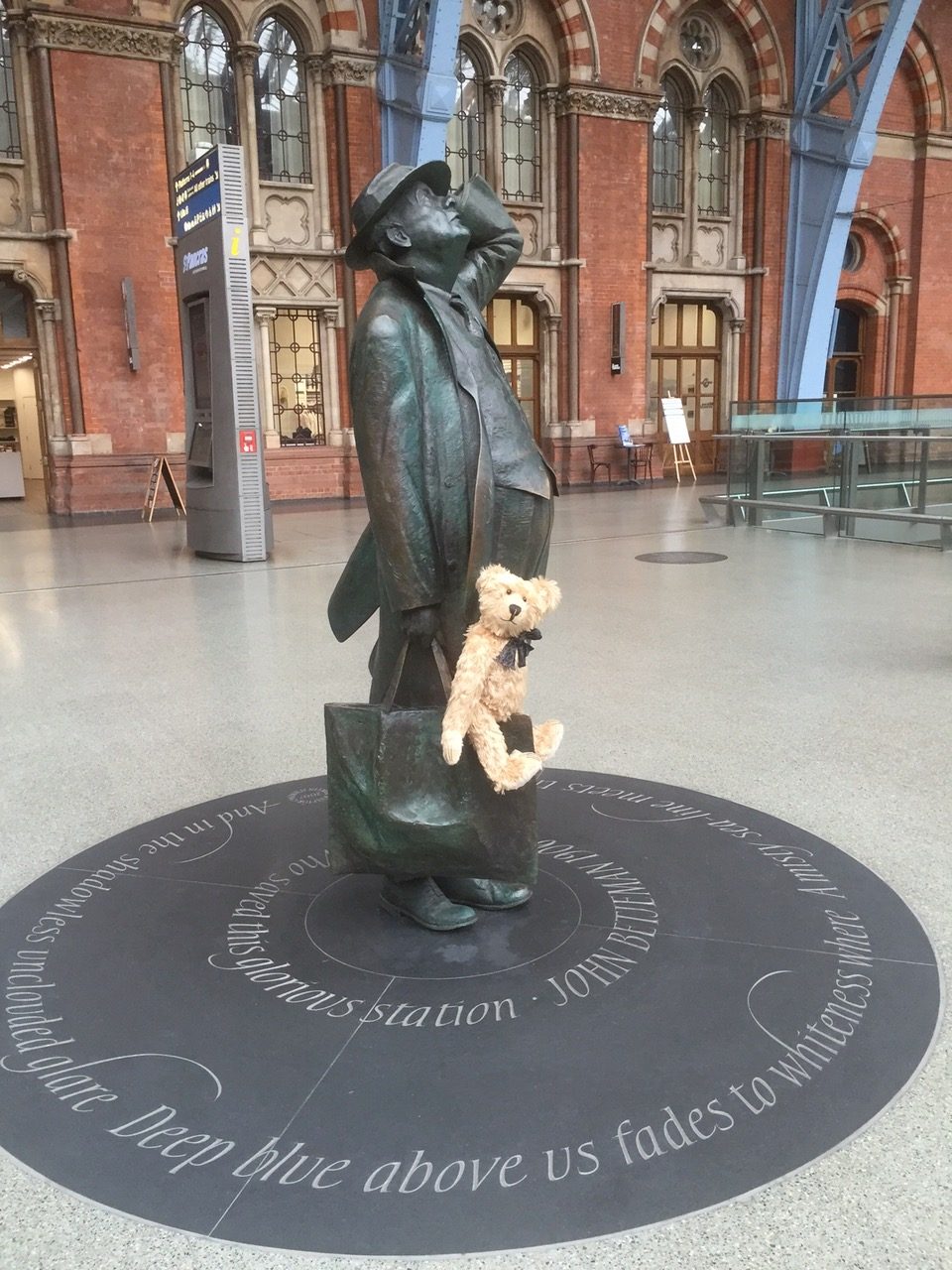 Sir John Betjeman. Suitably honoured for being more than Poet Laureate, but also for his other interests. Particularly in campaigning to save historic buildings. More than anyone he saved St Pancras Station, to become the focal point of continental train travel. The start of so many railway journeys. The statue shows him looking up at the roof of this magnificent building.

The following film describes this lovely chap better than any words I can write. He was the original “National Treasure”. Look out for Archibald Ormsby-Gore , “Archie” who, together with “Jumbo” his toy elephant, was in his arms the day he died in 1984. “Whose eyes were sad or glad for me” appeared in Bobby’s funeral tribute to Diddley when he introduced me to the congregation.

There will be more on Sir John Betjeman. And so to Paris… Next episode. We walked along the platform and heard beautiful piano music. A young chap, haversack on back, playing heavenly music on an old upright piano. 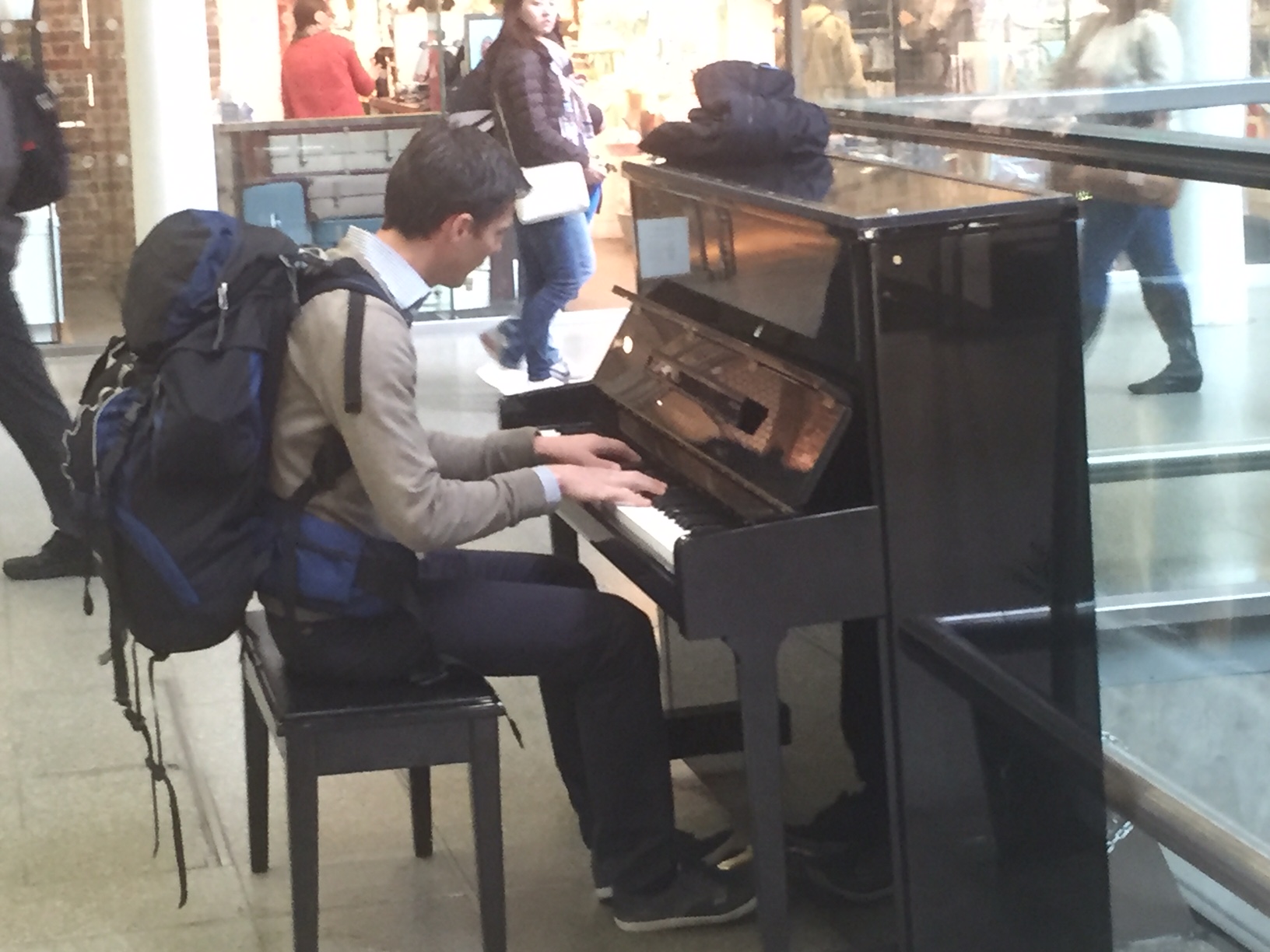 Two pianos along the platform. One donated by Sir Elton John. We stood a discreet distance away and just listened. Bobby asked him after what the familiar music was… Chopin Nocturne no 2. Felt we should have known that.

Play this when you need to calm down.

Next episode will be setting foot in the City of Light for the very first time. Never quite made it with Diddley.

John Betjeman lives on in an historic electric locomotive. Seen here in the London Transport Museum at Acton. See www.ltmuseum.co.uk/whats-on/museum-depot and also a future blog. “The Day at the Museum”. 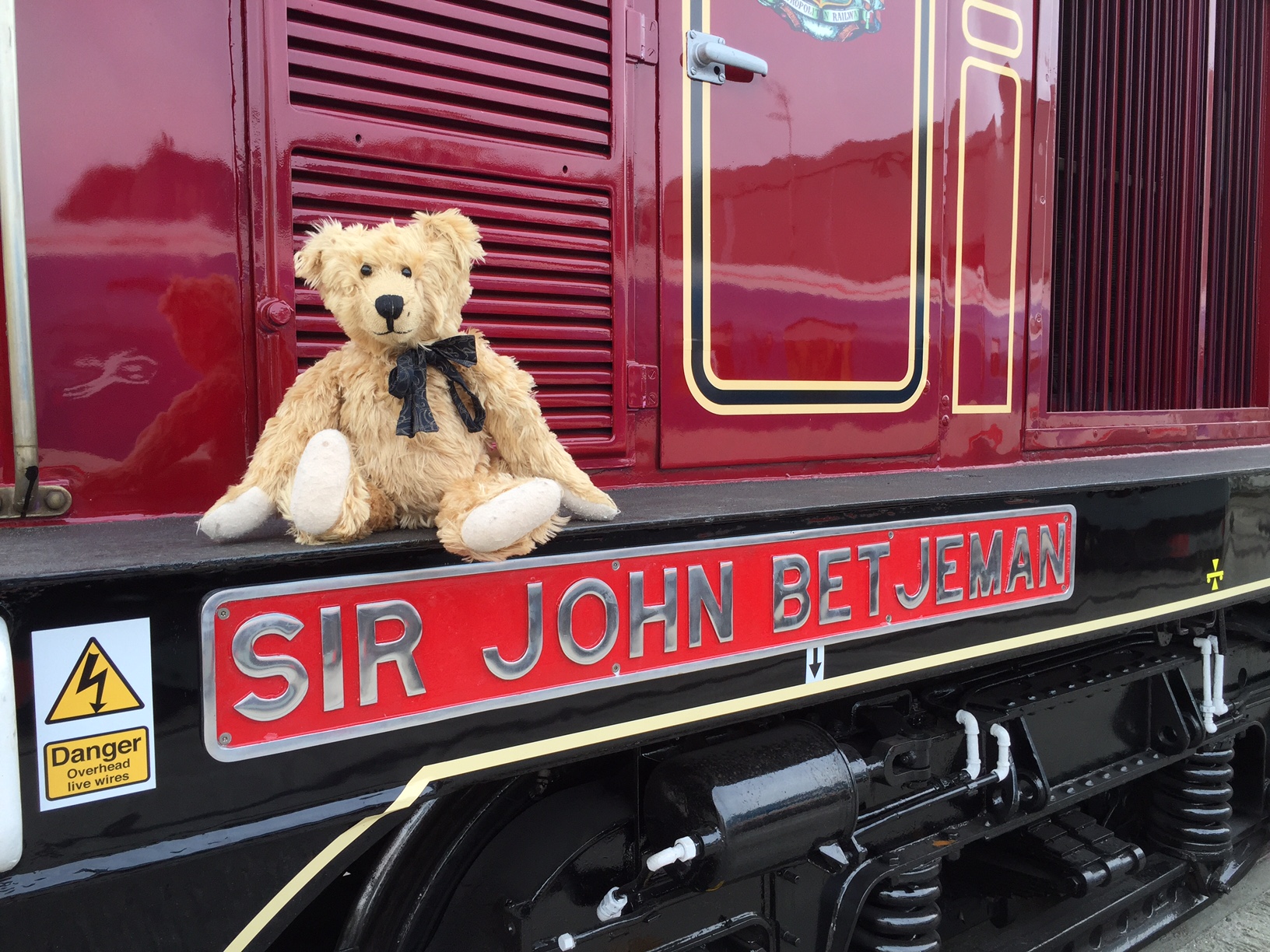 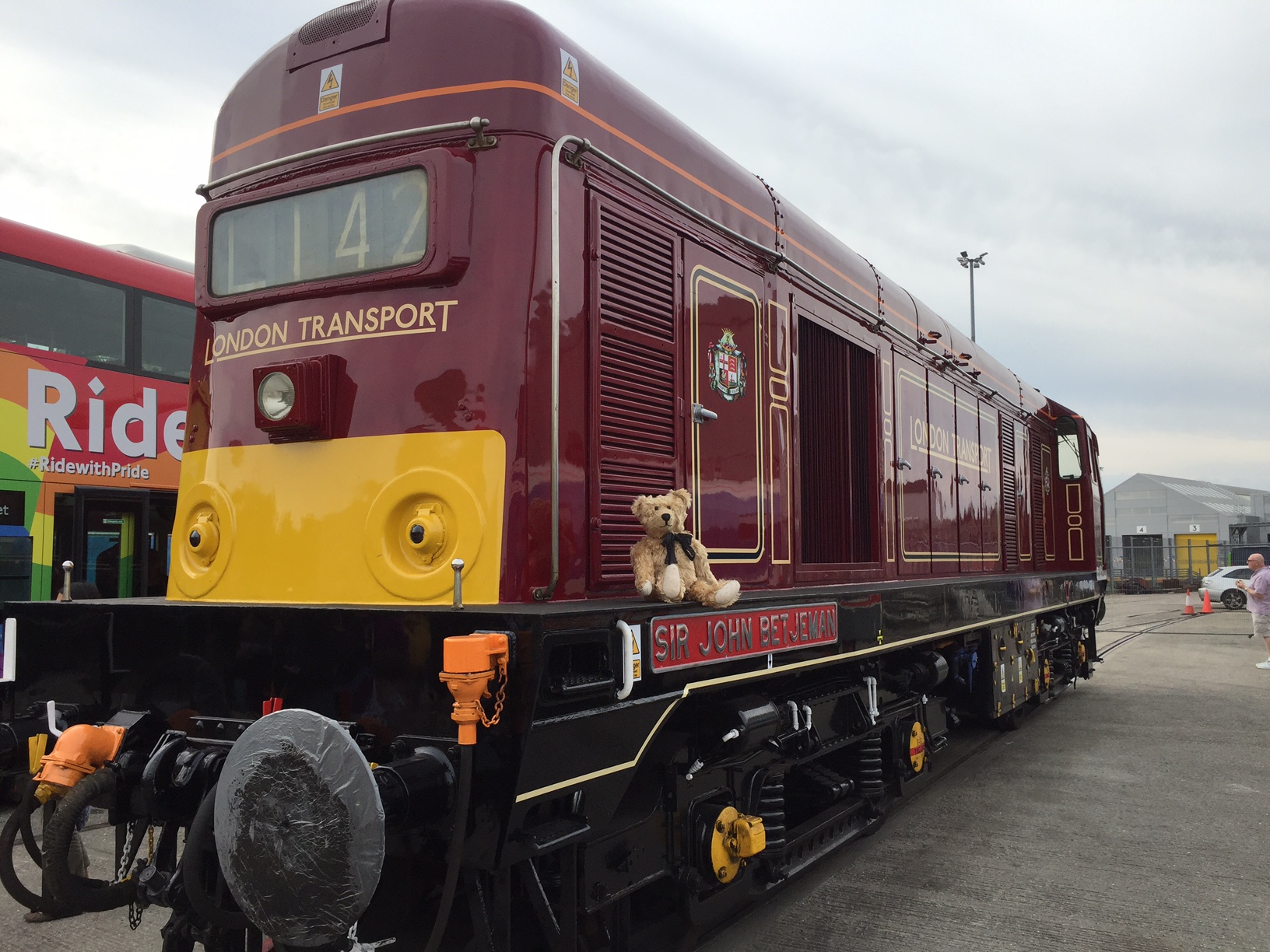 Brilliant place for bears. Acton. The big depot of the London Transport Museum at Covent Garden. By coincidence, the engine in a siding at Clapham Junction last Tuesday. Showing that the engine is still alive, as is Sir John Betjeman’s poetry.

Lighting a candle to Diddley.

Lighting candles is taking me to wonderful places. Like Old St Pancras Church. Here’s a few pictures and a taster for a future blog. None more so than the Thomas Hardy tree in the church graveyard. The poet was once involved with the exhumation of bodies to facilitate the building of the Midland railway. The gravestones piled up around the ash tree. 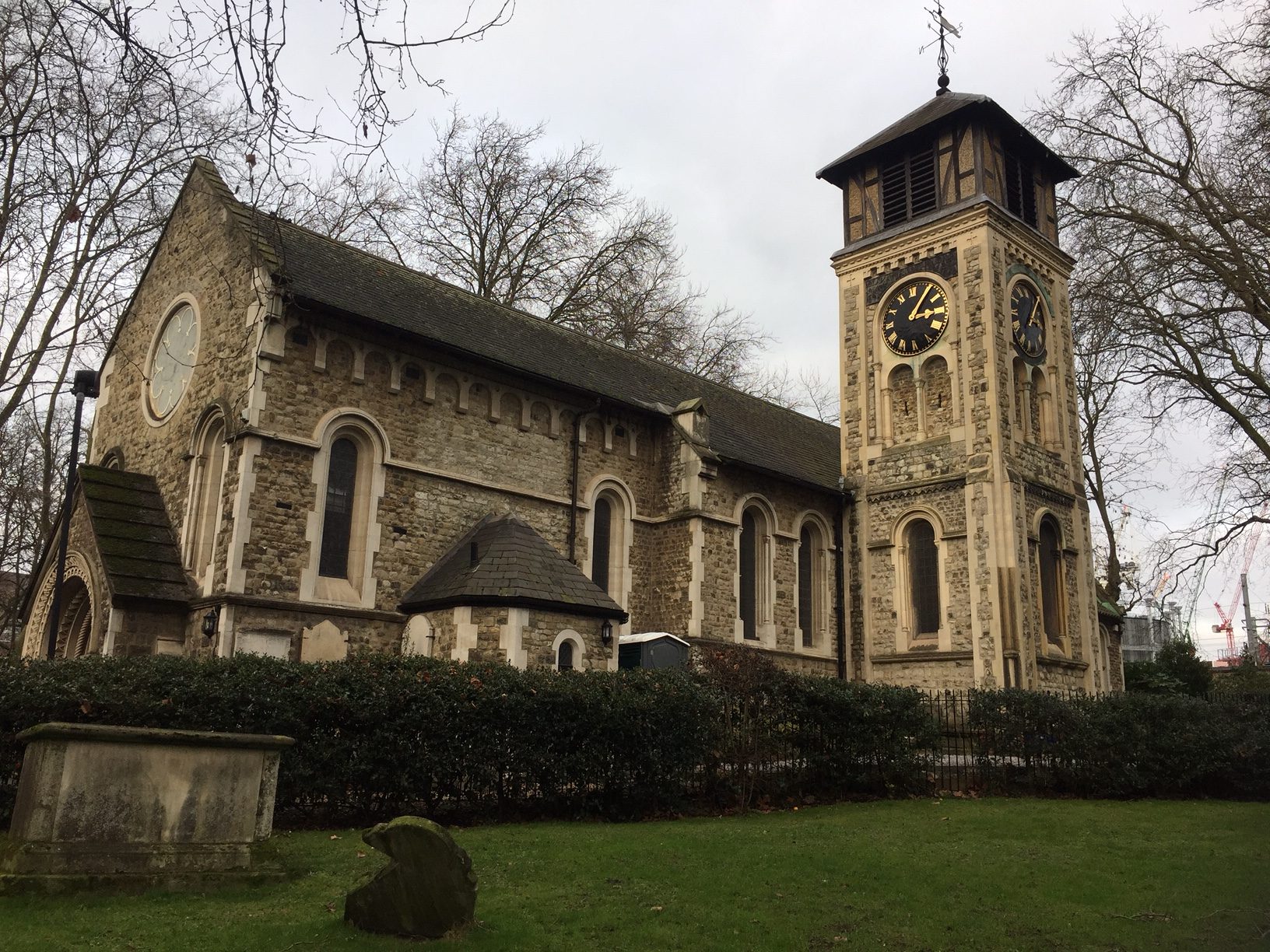 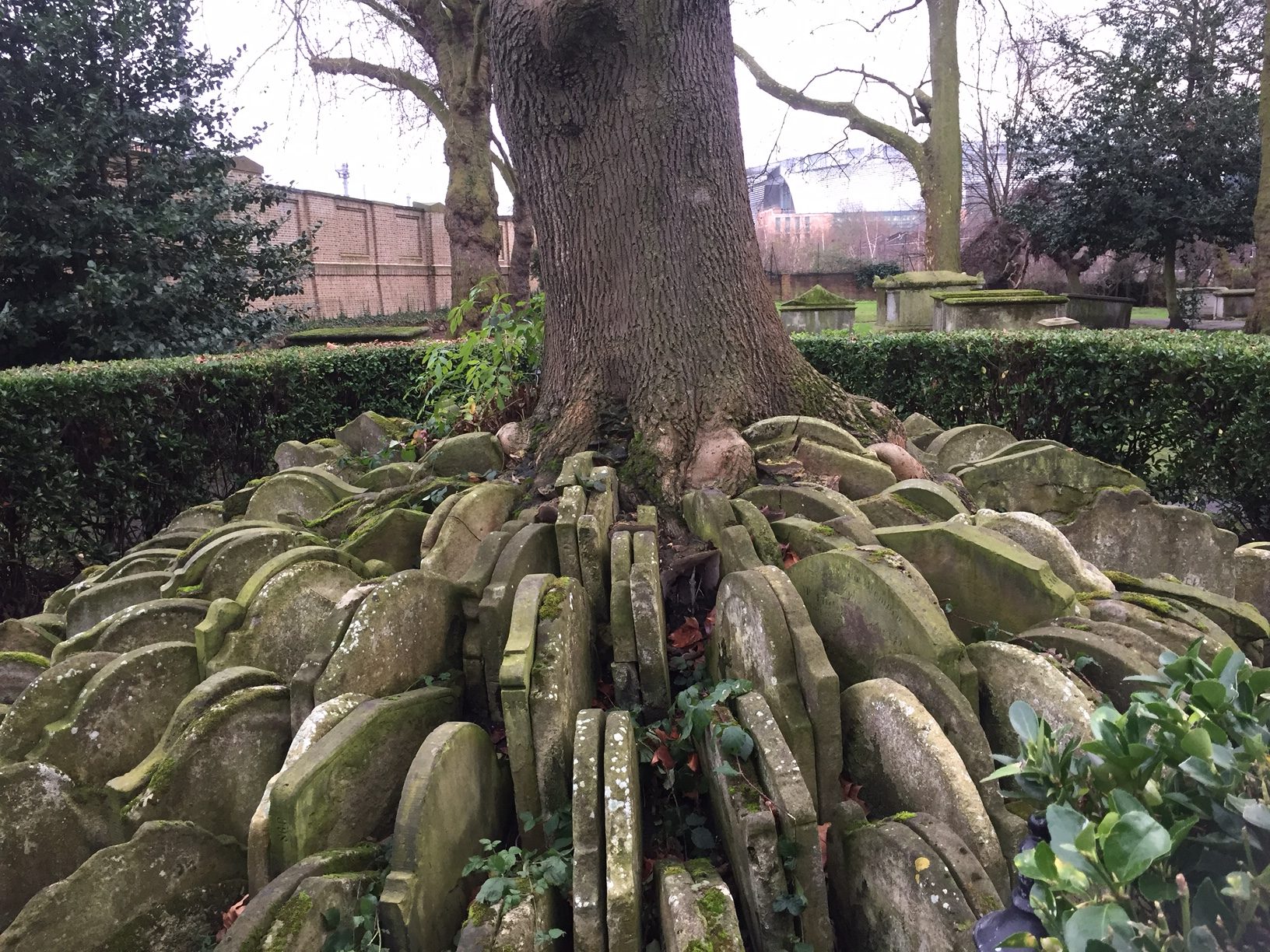 The Thomas Hardy tree and gravestones. 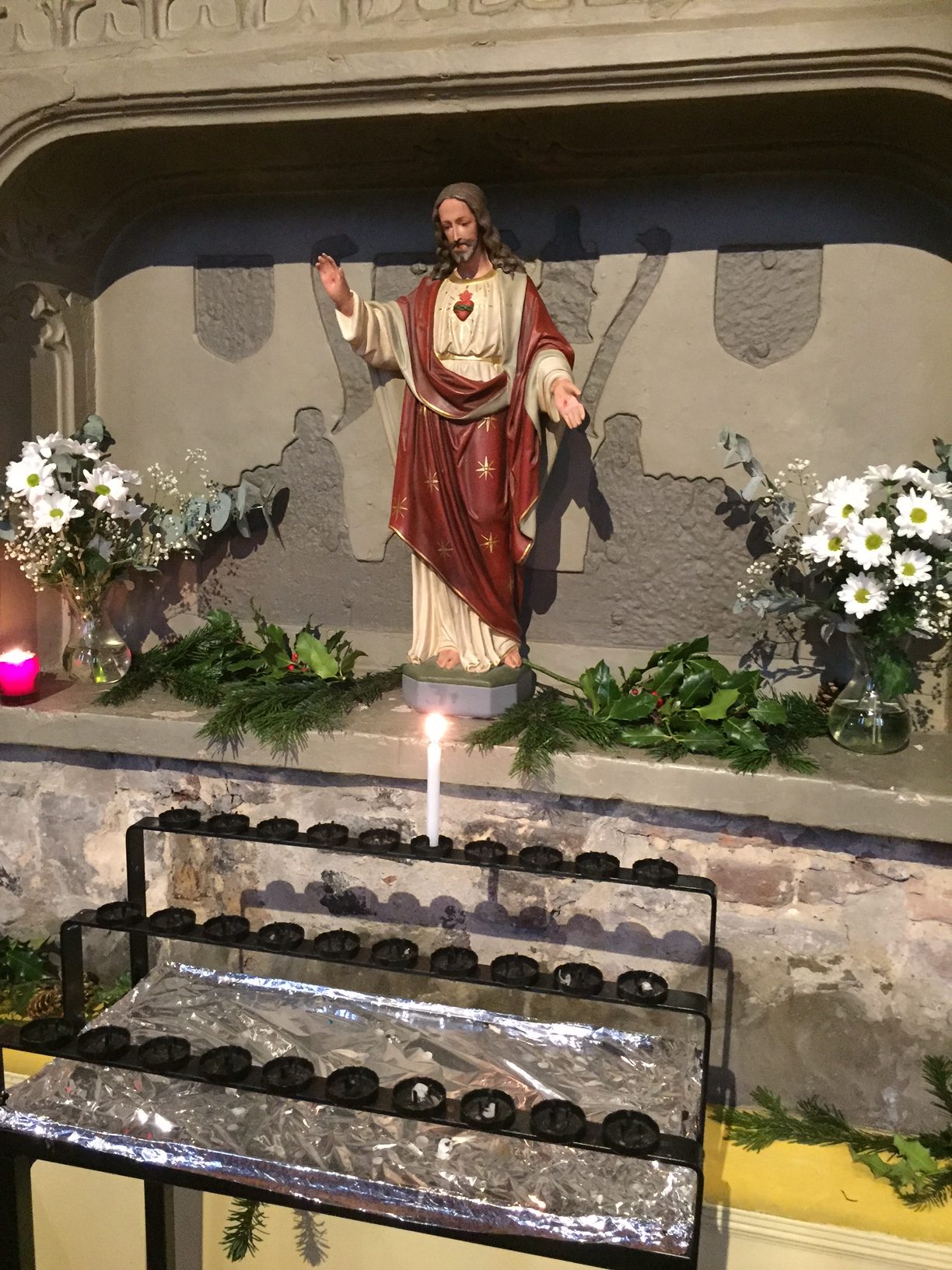