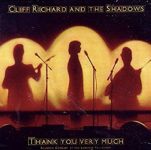 In Praise of Sir Cliff Richard.

Diddley did not like Sir Cliff Richard. His squeaky clean image did not suit a sixties art student heavily into Bob Dylan, Tom Waits, Neil Young and the rest.

Over the years, she introduced Bobby to all her music. He grew to love artists he had never even heard of. He went to see Ute Lemper one memorable evening. Even saw Shane McGowan and the Pogues one irreverent evening at the Fairfield Halls. And finally Leonard Cohen. What a performer he was!

She enhanced his musical outlook for all time.

But he never got her to say one single nice word about Cliff. Sending her a birthday card that when opened had Cliff singing “Congratulations” was not a great success. I watched as she destroyed his Elvis CDs in revenge!

But, of course, we are talking of a time way before Diddley came on the scene. A time of innocence. First girlfriend. An age when music was unforgettable. And still is to this day. A time when certain songs take you instantly back to the Apex Youth Club, North Cheam. Club tea. Once a month film shows, only accessible if you went to the Methodist church service attached first. Such a song is this:

At the time, Cliff was the red hot teen favourite. Together with his group the Shadows and separately, they ruled the pop scene from 1958 to the advent of the Beatles. The girls loved him. The boys preferred the Shadows and couldn’t admit they loved Cliff too. He was Britain’s Elvis and he freely admitted that Elvis was his hero.

Many more songs followed. He even starred in films that are equally fondly remembered. None more so than “Summer Holiday”. Bobby remembers queueing to get into the North Cheam Granada to see the film. A 1,000 seater cinema. Closed on 18 October 1969 and demolished. A Sainsbury’s, with offices above, took its place. In 1995, the supermarket became a Wetherspoon’s – “The Nonsuch Inn”.

Years later, they would sing “Summer Holiday “ on route to the seaside:

Prior to that was the iconic “The Young Ones’:

“Hits from the Young Ones” Album Cover. Note – in glorious mono!

That was then, but this story really starts in the seventies. When married to a Cliff fanatic, he went year after year to see him at the Fairfield Halls in Croydon. Quite simply, Cliff is the best performer singing live that Bobby has ever seen. Those shows were wonderful. Queuing each October for tickets for two nights in November. Sir Cliff Richard had reinvented himself and still retained his army of loyal fans. As he does to this very day.

The Fairfield Halls were (and still are) a wonderful venue.

Cliff, the ultimate showman, never shared the show with another act. He did have a guest now and again including, memorably, a fresh faced Oliver Newton John in 1970. And, of course, he sometimes had the Shadows with him. He had total respect for his fans, but did get it badly wrong once when he sang a hymn. Unaccompanied and met with embarrassed silence. I doubt he ever did it again, but saved them for gospel concerts. Bobby went once, but it wasn’t for him.

By this time, the incumbent Mrs Ball had founded the Dorking Cliff Richard Fan Club. A short-lived venture, bedevilled by weirdos in white suits. It did have a grapevine and Dorking did have Strawberry Studios. Owned by 10cc, many guest artists recorded there. Kenny Everett, Wings and, one famous night, Cliff himself. The Dorking Branch of his fan club was now down to one and met him in person at the stage door. A gentleman to the last, the piece of paper he wrote on is undoubtedly framed on a mantlepiece, somewhere in the Rustington area.

It wasn’t just Fairfield Halls, of course. Now and again he would have a reunion with the Shadows, including one famous night at the London Palladium. Quickly sold out, but there was a faint chance of standing tickets for Bobby. Working for the Legal and General in Surrey, he told his office he was going to the basement to look for a file. In reality, he got on his Honda C70 moped and rode fifteen miles into Central London to pick up two standing tickets for that same night. Later in their Ford Cortina, they went back to jive in the aisles to Cliff once more with his Shadows. 1979. The evening ended ignominiously with Mrs Ball catching her heel in the carpet and landing in the laps of the front row. Ha ha ha … ooh err.

The London Palladium Reunion Album Cover with the Shadows in 1979.

But by the eighties Bobby had moved on. To Dire Straits and others. The ladies clung to Cliff, who was working bigger and bigger venues that had none of the intimacy of the Fairfield Halls.

He never saw him live again, or believed the rubbish he has been accused of. Sixty years in showbusiness and still drawing in his ageing ladies by the thousand. He has had his critics, like Diddley, but has risen above them all with dignity. He gave Bobby’s generation memories that have lasted a lifetime. So he for one is in praise of Sir Cliff Richard.

They went to the Fairfield Halls many more times. Most memorably to see the Shadows. Unusually, the Halls were set up with choir seats behind the stage that were available for some performances. Bobby and son Andrew sat in the choir seats for the Shadows and, at half time, Brian Bennett turned round and gave him his drumsticks. Which he has to this day.

Fairfield Halls, showing the choir seats behind the stage.

So for this PS. For Bobby and Andrew, we give you the Shadows and Wonderful Land:

What great days they were.

I Don’t Believe It

In St Martin’s in the Fields. To Diddley and all those we have lost and those who need a helping hand.