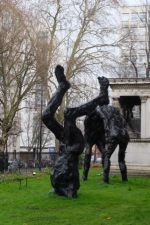 Trevor: “Whatever gave you that idea, you idiot! I can hardly breathe with this contraption on.”

Bobby: “Look here. Your problem was saggy bits due to your filling. We could have paid to have you filled up, but Fliss reckons you are meant to be like that.”

Trevor: “May I ask who Fliss is and what business is it of hers?”

Bertie: “She is my mate and has bears and cats galore. I like it over at Fliss’s.”

Bertie: “Maybe so, but it’s fun. You should try it, you miserable git. But fair do’s. That belt does look a little bit like a truss. Bobby had one once to keep Henry under control.”

Trevor: “Who on earth is Henry?”

Bertie: “His bleedin ‘ernia . The truss was supposed to keep it under control and not pop out! Cos when it did, Bobby had to stick his hand down his trousers to shove it back in!”

Bertie: “Look, Trev. Fliss reckons we should get you a pair of Leslie Crowther’s.”

Trevor: “What on earth?”

Bertie: “Trousers, mate! Anyway. Are you up for producing another sticky blog?”

Trevor: “Yes. How about sticky labels for airlines in 1959 that are still flying?”

Trevor: “Well, dear readers. I hope you enjoy the second selection of Bobby’s sticky labels. Let me know if you like them, as there are more. Together with tie on cardboard labels and loads of other collectibles. Bobby loves them, because they remind him of planes he loved years ago. Particularly the Super Constellation, in all its variants. The plane with three fins on nine.”

As we mentioned above, Bobby loved the Lockheed Super Constellation. Particularly the last version . The L1649A Starliner. When flying for Trans World Airlines (TWA), known as the Jetstream. It had grace. It had glamour. It had the beautiful Wright Cyclone engines. When it floated into Heathrow back in 1950s, it took your breath away with those wonderful piston engines.

This is the Constellation. BOAC flew them once. The Super Constellation, in many variants, was a stretched version that became the icon of many airlines. You can still hear wonderful piston engines like this by going to Flying Legends Airshow. www.flying legends.com. 14-15 July and play the trailer. There is also the blog for last year’s show here.

Another TWA Jetstream in Flight.

Beautiful work of art. But why three fins? I am told to keep the height lower than one big fin to allow access to low post war hangars.

Lighting a Candle is an opportunity to remember those we love and miss in a living flame. It is also, as we have discovered, an opportunity to enter buildings we probably would not have done so previously. One such is St Pancras New Church. St Pancras Old Church has been featured and is exquisite. The New one fills Bobby’s heart with gloom. A vast neo classical Grade 1 building, with hideous statues currently on the lawn. He passes it most weeks on the top of a No 73 bus. But, for this feature, he put his prejudices aside and actually went in. And was pleasantly surprised. Still not a favourite, nevertheless it does have grandeur.

And we lit a candle to Diddley.

Impressive. And boxed pews, too.