In the early part of the twentieth century, a movement for young people was started that quickly swept the world. The Boy Scouts. In time, this also included the Girl Guides and the Wolf Cubs for younger boys. Millions of people today have fond memories of their young days in this organisation. Many more continued into adulthood to be part of the movement whose ideals were to prepare young people for adulthood. To give them strong principles. While all the time ensuring that they had fun doing it. Bobby has fond memories of his own time as a Wolf Cub. A Boy Scout. And later a Scout Leader. A brief memoir is attached to the end of this story.

Today the scout movement thrives in over 200 countries with a global membership of over 31 million. Male and female. Two thirds of the international membership are in developing countries.

One man was responsible for starting this movement. Lord Robert Baden-Powell. Based upon his ideas and his book “Scouting for Boys”. He eventually held the title The Chief Scout of the World. Lord Baden-Powell of Gilwell. And remained that until his death in 1941. A memorial issue of “The Scouter”, the magazine of the Scout Association, was produced at the time and Bobby has a copy. 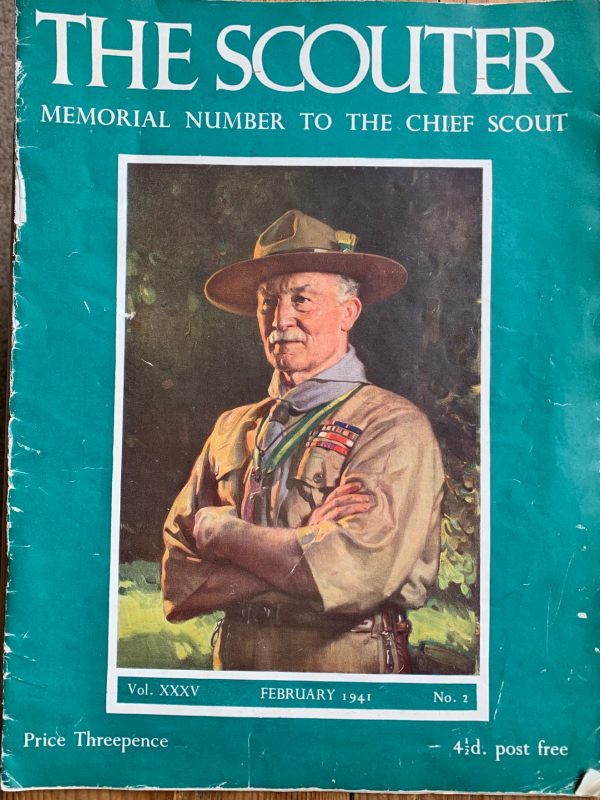 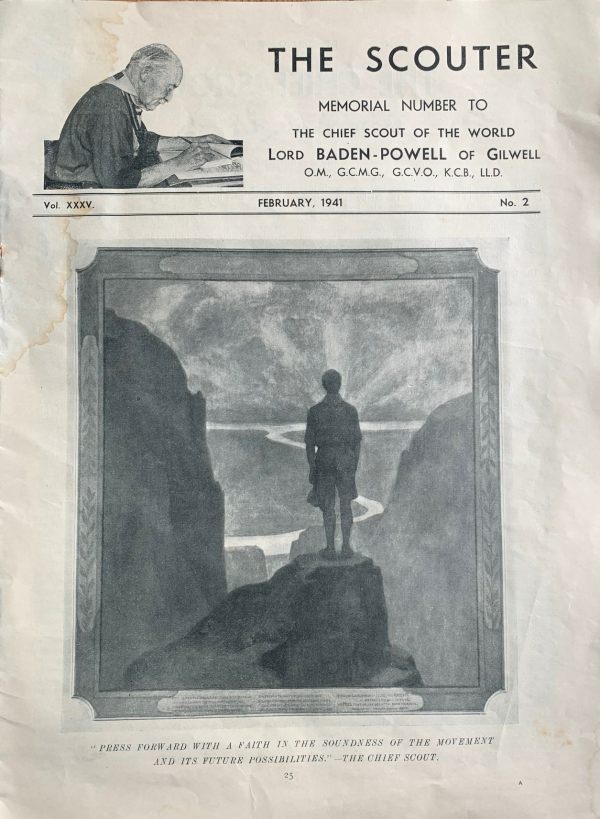 The magazine has the life story of the founder in it. Most remarkably, it also has two letters written by Baden-Powell in anticipation of his own death and they are reproduced here. 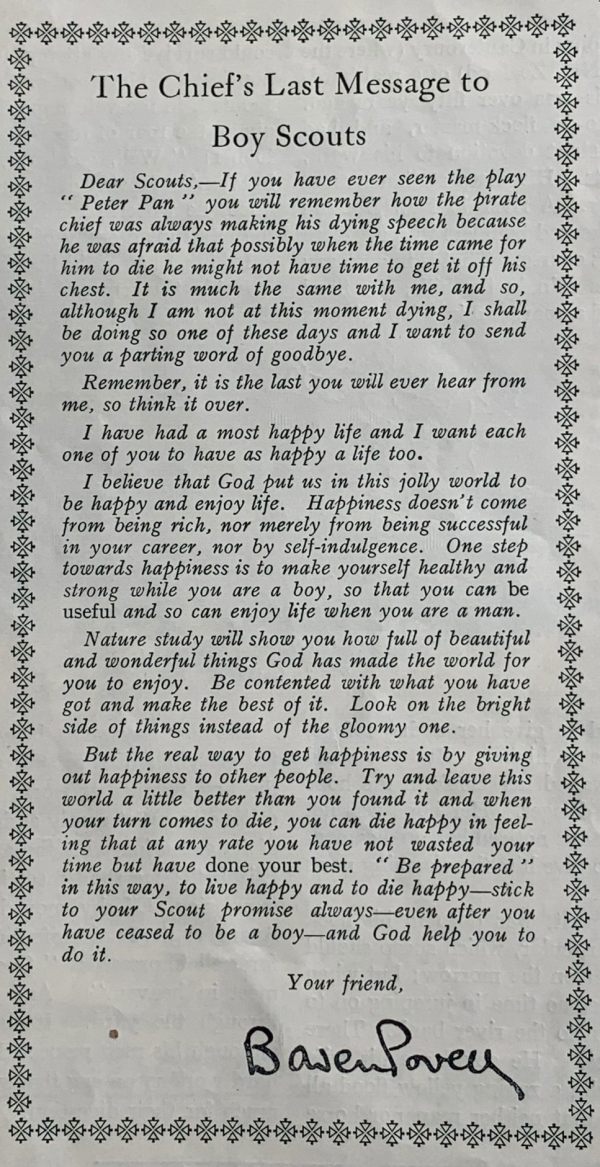 The last message to the Boy Scouts. 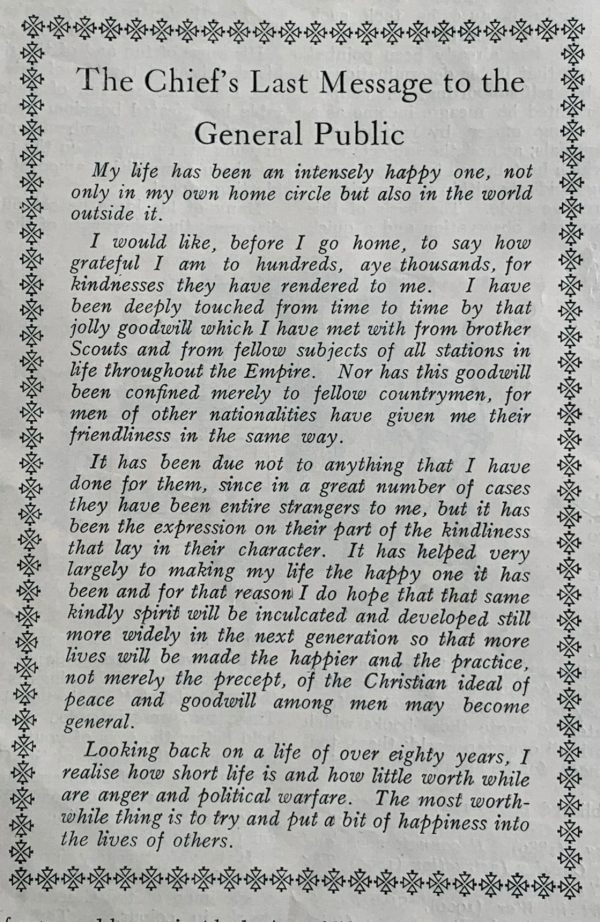 The last message to the general public.

Condolences from the King and Queen.

One of many adverts, showing that this was in the middle of WWII.

The Chief Scout today is Bear Grylls. The movement has embraced the times we live in. whilst never forgetting its original ideals.

I loved the Wolf Cubs. 2nd Cheam met in a church hall in my road. They were modestly adventurous, but had one call to fame. A leader worked for the BBC and, with his encouragement, became well known for putting on shows that we all appeared in. Cheam Parochial Rooms are still there. As a young boy it seemed like the London Palladium. The shows always ended in singing for what had become The Gang Shows in big cities.

“We are Riding Along on the Crest of a Wave” … “The Quartermasters stores” … “Parlez Vous.” 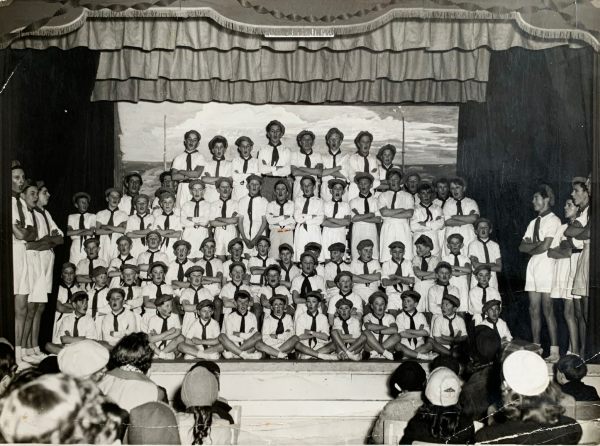 “We are Riding Along on the Crest of a Wave” (Bobby second row from the front right in the middle tallest). 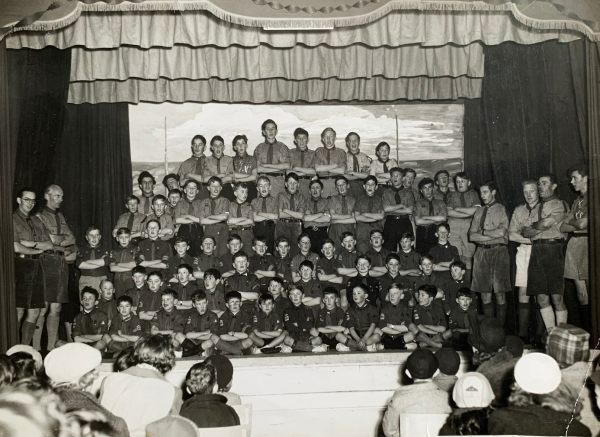 “They’ll be Coming Round the Mountain” (Bobby front row, furthest to the left). 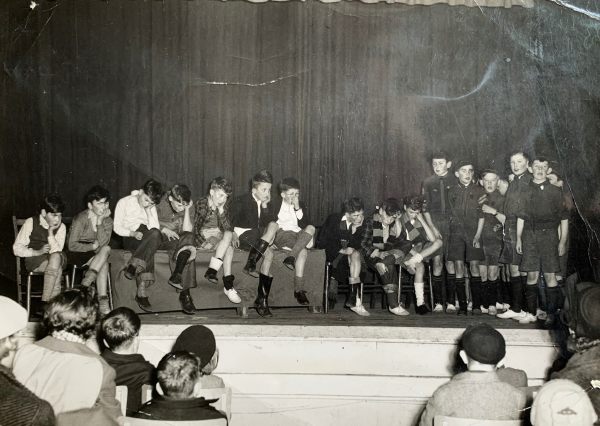 “Smile Please.” Sketch (see programme. Bobby sixth from left. Tallest. Next to Howard Springett in a white shirt. He was posh. Bobby live in a terraced house. Howard in a semi. Together, they ran a Subbuteo football league at different boy’s houses. They were both 11 years old). 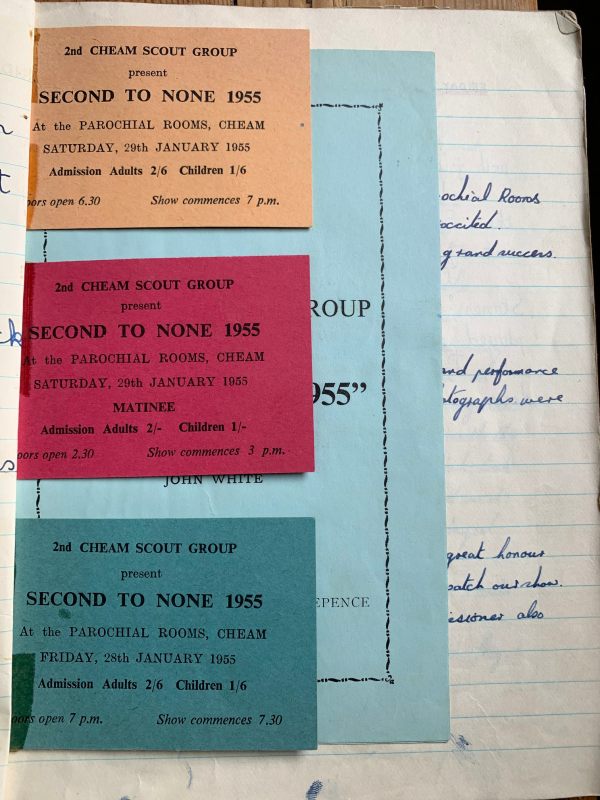 Tickets. Not too expensive! 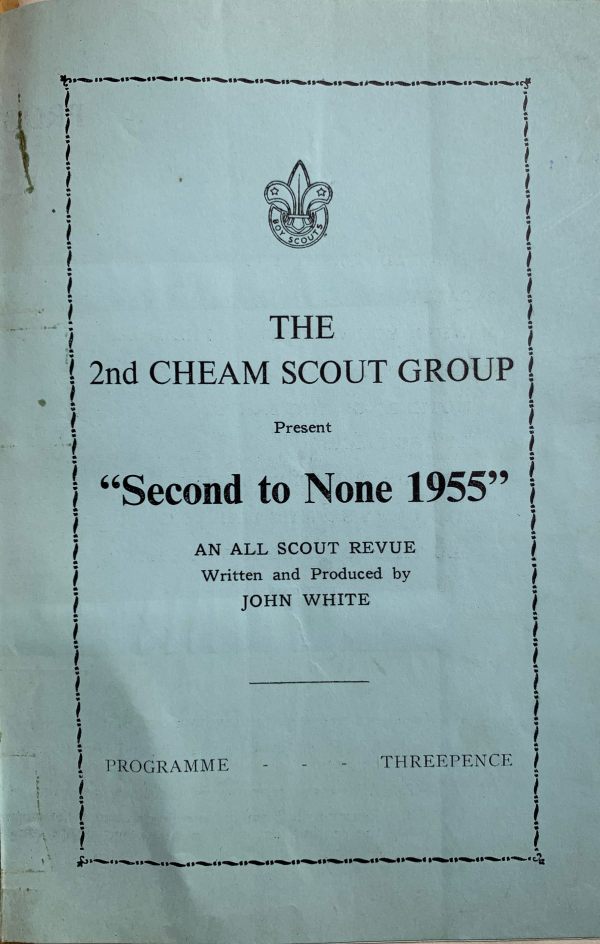 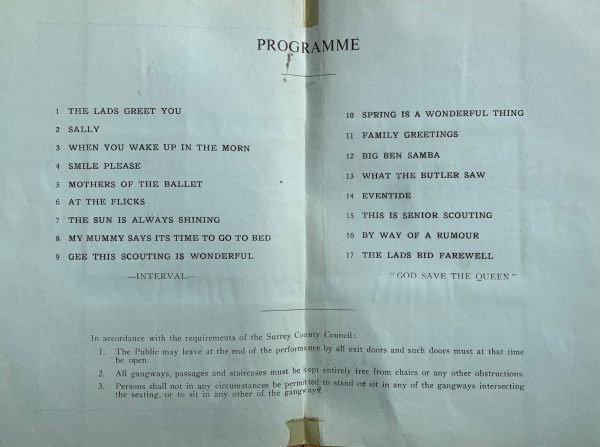 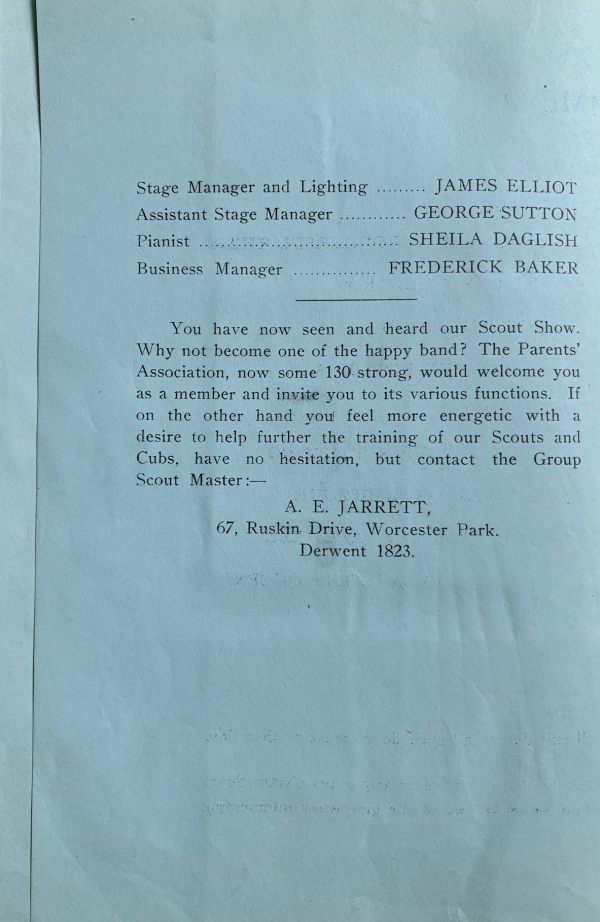 Moving up to the Scouts, I found so many competing interests that gradually I slipped away. Maybe I should have persevered. But, for a while, I was a member of the Falcon Patrol. The troop, still 2nd Cheam, had four patrols. Owls, Peewits, Eagles and Falcons. I liked being a Falcon, but never understood where a Peewit (Lapwing) fitted in between three birds of prey. We kept a patrol diary and I still have it. How on earth did I land up with it? I was the main “scribe” at just eleven. Already showing a liking for writing. So here is just one entry. 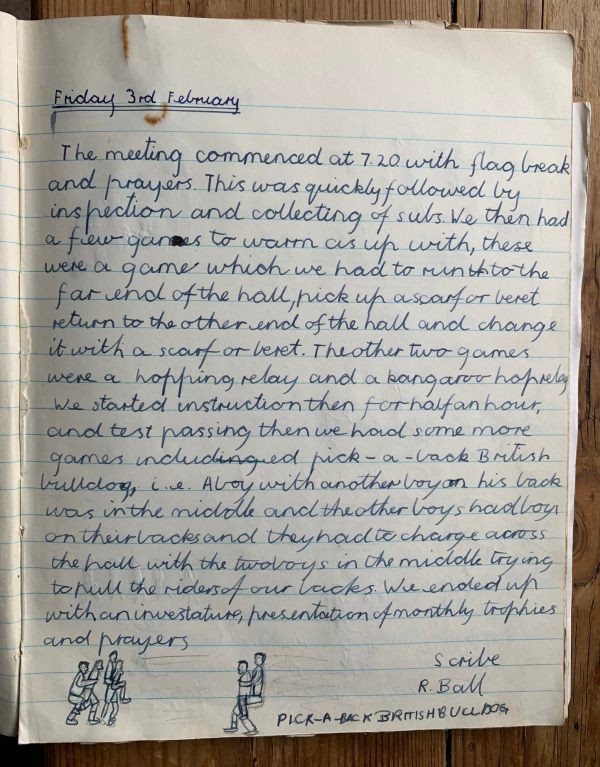 We did a lot of praying. 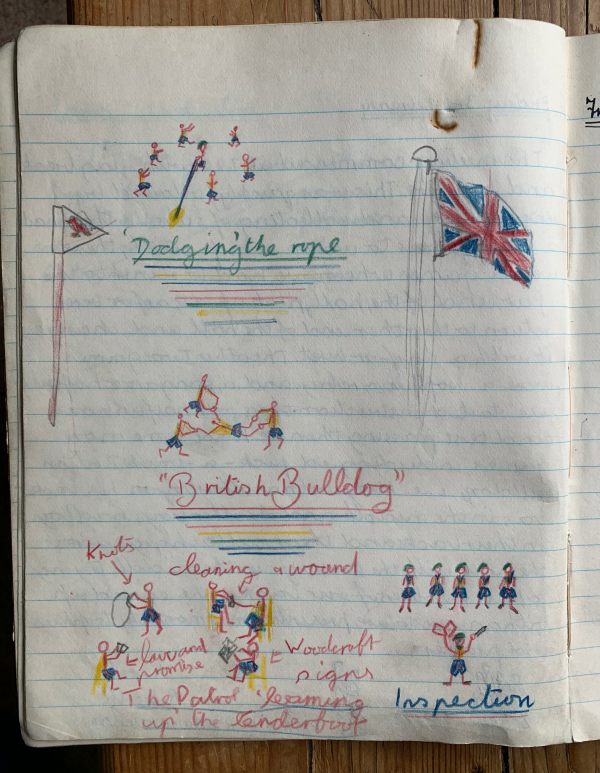 Most of these games are banned now. British Bulldog went west a long time ago. Especially the pick-a-back variety.

And finally, I became a Scout Leader. Despite not being a very successful scout, I acknowledged St Paul’s Church in Dorking had asked me to reincarnate their scout troop. 4th Dorking (St Paul’s). “I did my best” in true scout tradition, but the odds were against me. The church, apathy with parents and finally my own fragile mental health. For a while, I was an assistant leader at 18th Dorking and have fond memories of my time there when my son Andrew was a scout. 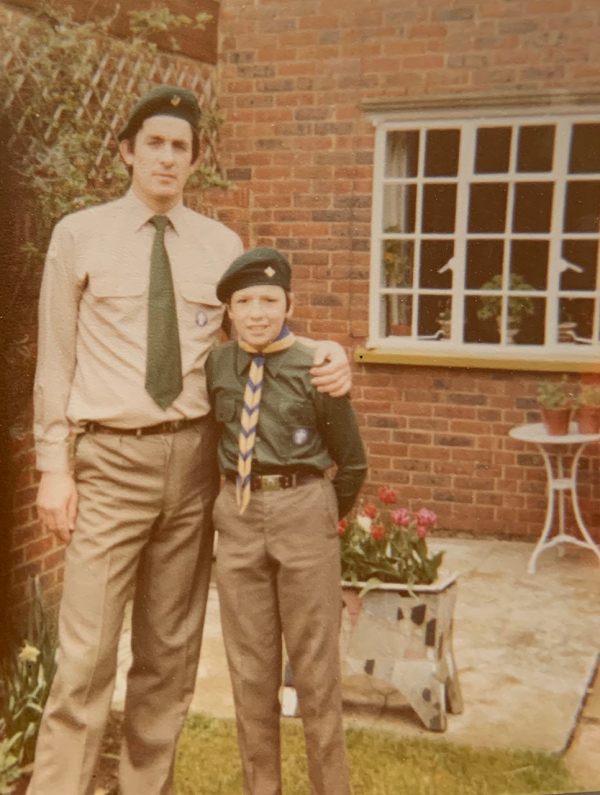 “Skip” and Andrew. 18th Dorking. Ready for St George’s Day Parade 1977. Marching down the High Street. Even now, 43 years later “boys” 43 years older still call me “Skip”. I was brilliant, but it was impossible with little back up.

In fact, I have wonderful memories of a great organisation and even now can vividly remember the Wolf Cub Promise.

I promise to do my best
To do my duty to God and the Queen
To keep the law of the Wolf Cub pack
And to do a good turn to somebody every day.

Nowadays, there are variations to these words to encompass different religions and cultures. But they all start with “I promise to do my best”. And I still do. 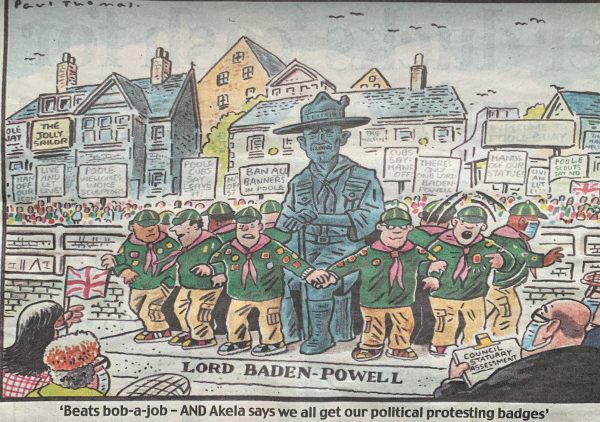 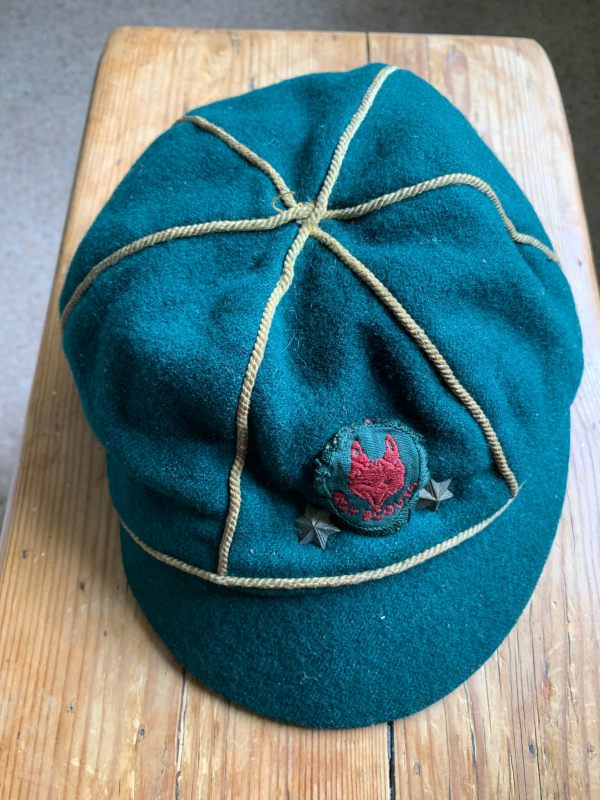 You wouldn’t believe how much stuff Bobby has kept from his childhood. Including his Wolf Cub hat emblazoned with the two stars of achievement. 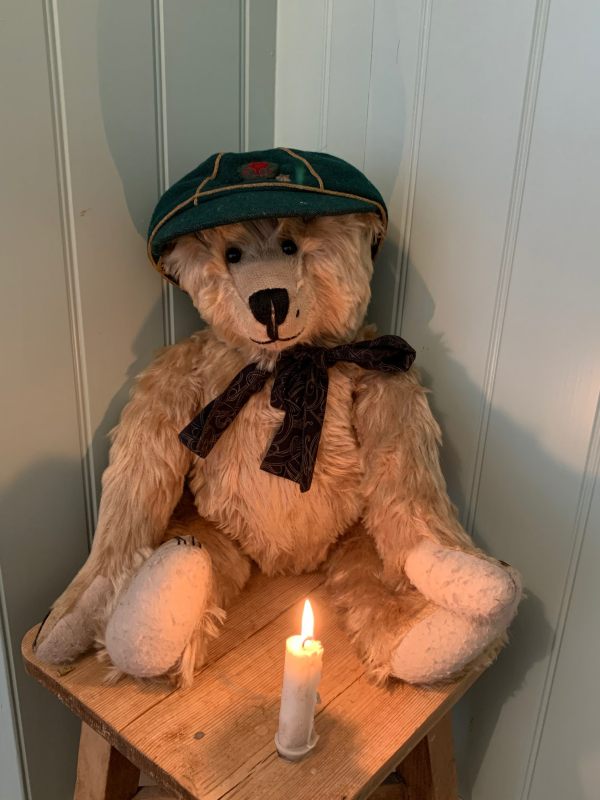