The Story of Eamonn’s New Scarf 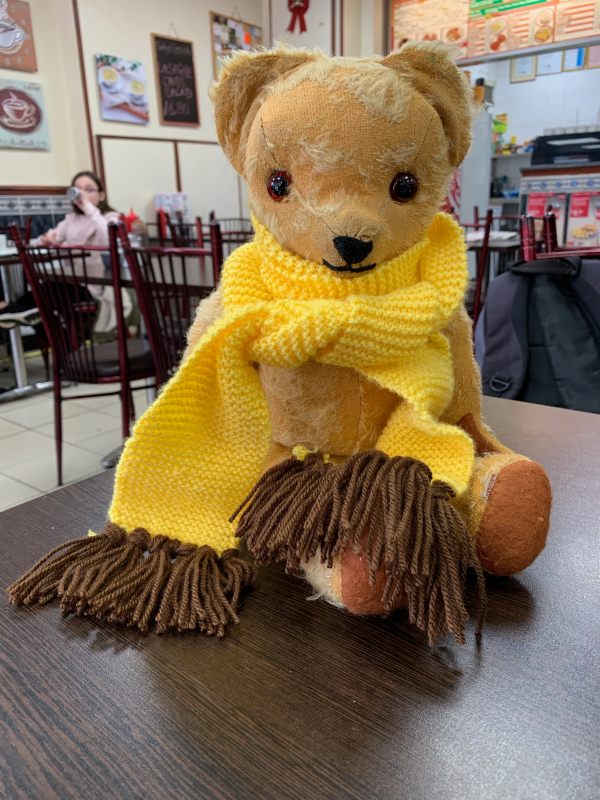 Bertie: “Bobby. We have been stuck at home for weeks now, but you seem quite happy. If someone asked you ‘where would you rather be today, anywhere in the world’, what would you say?”

Bobby: “That’s easy, Bertie. I have been asked the same question in years gone by and the answer has always been the same. Imagine a day in March. The sun is shining. The breeze off the sea is fresh if not a little chilly. It’s so clear you can see all the islands, including Grassholm. You can even see the Smalls Lighthouse twenty miles out to sea from the Pembrokeshire Coast Path near St David’s. You need to be wrapped up. Including warm gloves and, most importantly, a soft cosy scarf!” 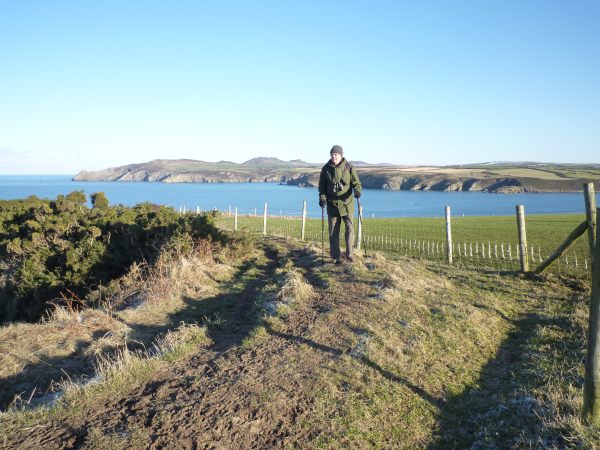 Bertie: “I love scarves too. And now share three with Trevor and Eamonn. I don’t think Trevor is really interested, but Eamonn was desperate to get a scarf of his own. You have quite a few scarves. Which one is your favourite?”

Bobby: .. “Well, there is my Sutton United scarf, but I only wear that to football. Then there is the most important scarf, knitted by my old mother-in-law Mary in the colours of Cheam Park Farm School. I nearly lost that on a train. Rushed back down the station stairs. Fell over. Got up. Got the scarf back and went to St George’s hospital with a broken wrist. There are a couple of boring ones I don’t wear now. But most important of all now is one I took from Diddley’s scarf drawer. She had over thirty scarves of every kind imaginable. One day, the granddaughters will model them for a story. But one caught my eye. A beige cashmere ladies’ scarf that is soft as a baby’s bottom. I love its softness.” 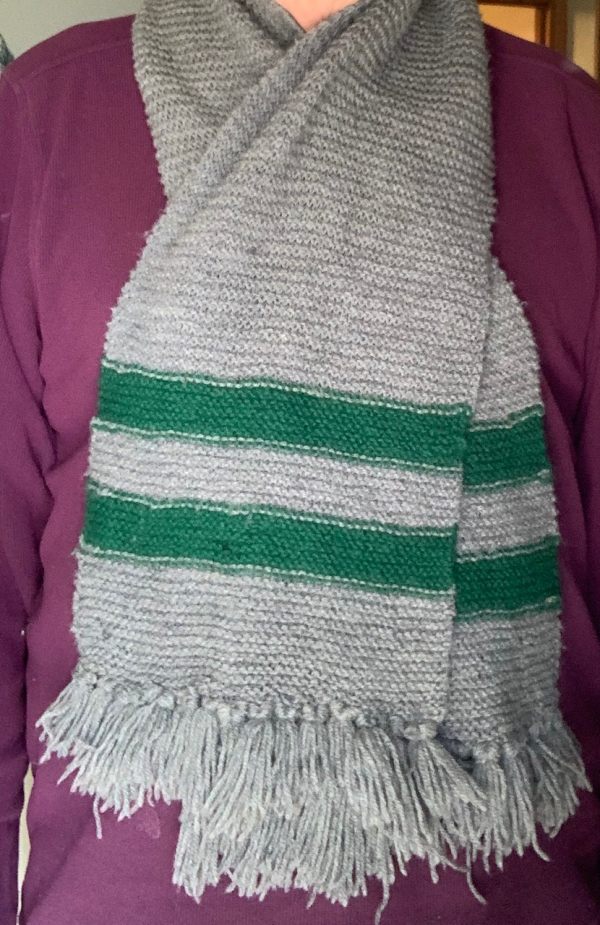 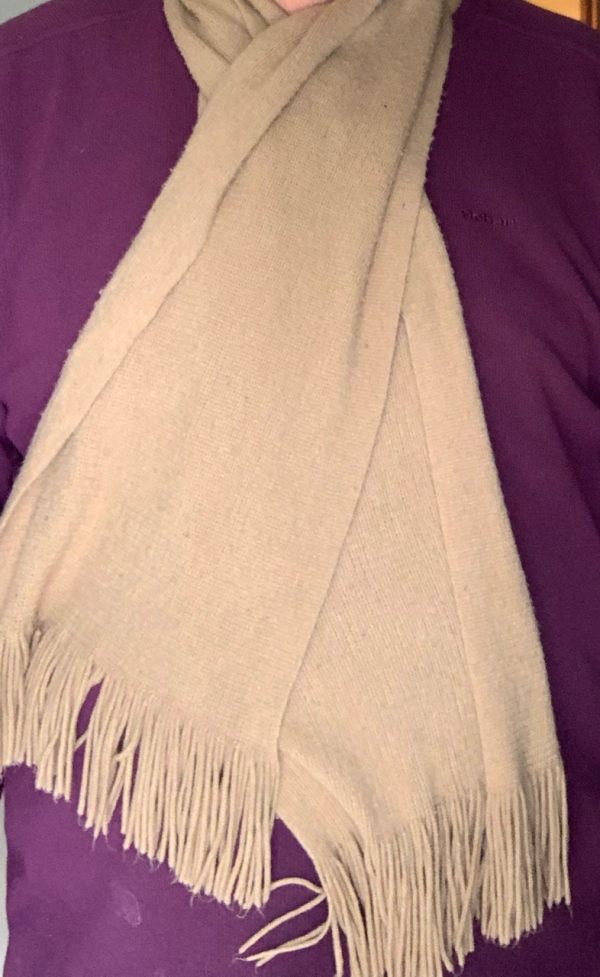 Soft as a baby’s bottom!

But, of course, dear Mary knitted a scarf for you, Bertie. Nearly thirty years ago in the colours of Sutton United.”

Bertie: “I love that scarf, Bobby. But it’s nice to have more than one. Particularly if you support more than one football club.”

And then, of course, there was Eamonn, the subject of this story.

Eamonn: “Bertie. Oi love your scarf. Do you think I could have one? And a bow tie? Bobby threw away the ribbon from the Teddy Bear Hospital, saying it was girly.”

Bertie: “Of course you can, Eamonn. What colour would you like?”

Eamonn.” SUTTON UNITED. But different to yours. All yellow, with chocolate tassels!”

So Bobby started wondering how he could get a teddy bear scarf knitted. He tried Gilliangladrag in Dorking. A wonderful colourful craft shop selling wool and all sorts of things. They said they would ask the knitting group who met their every now and again. The group responsible for lots of urban knitting around the town. Here’s their latest: 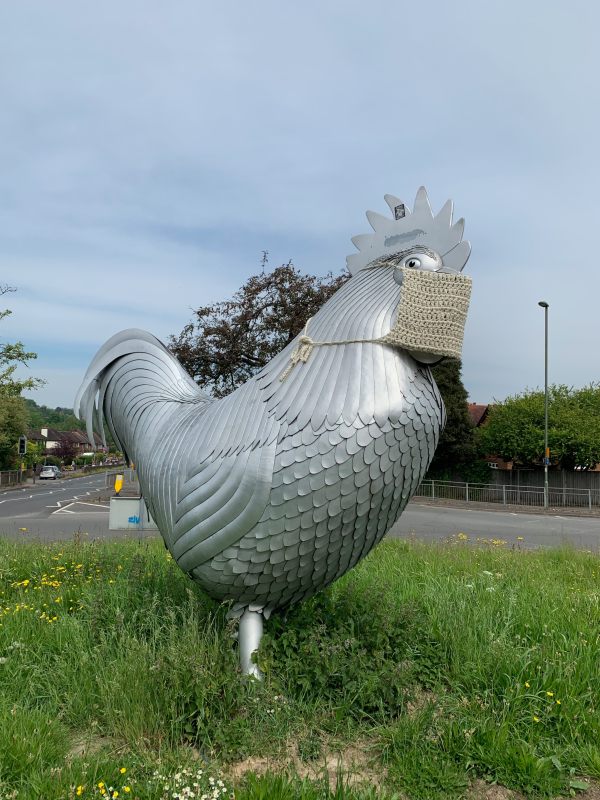 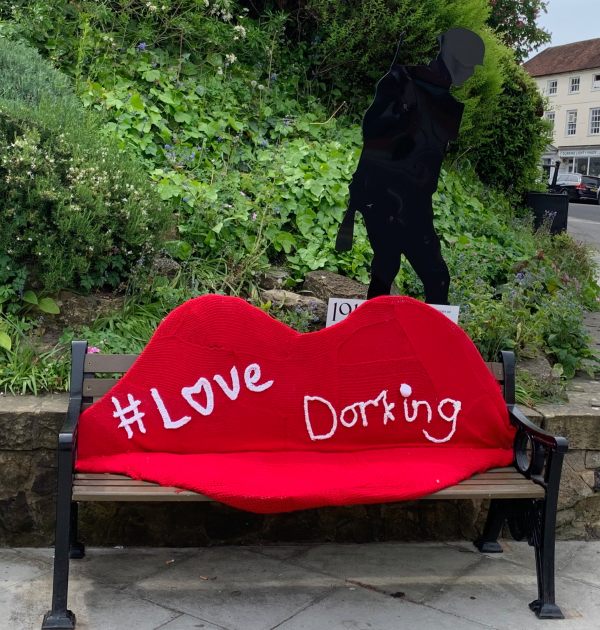 He mentioned the idea to friends, including Sutton United big friend David. Cycling supremo. Who came back and said Carol (Mrs David) would like to knit the scarf.

Yes please. Little realising what he had started. David posted progress of the scarf, as you can see, and then one day I took Eamonn to Sutton United. The scarf was presented to him at the Priory Road Café where pre match grub is the order of the day. Corr I miss that café. 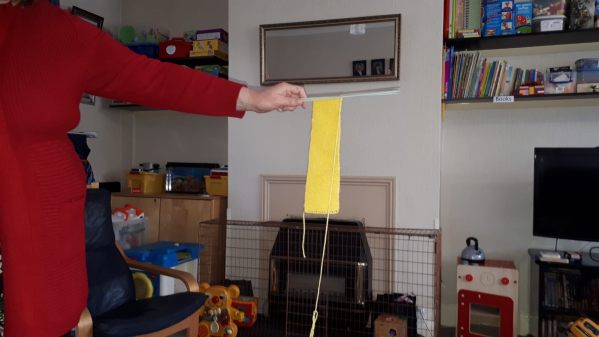 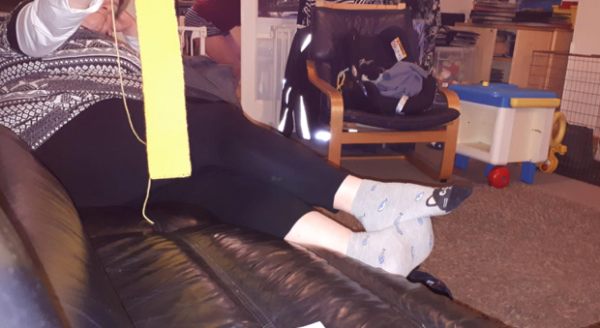 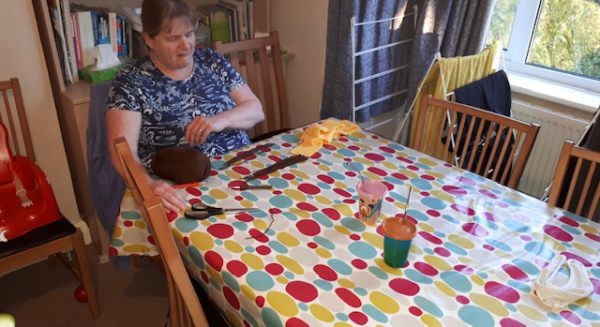 Onto to the chocolate tassels. Keep going Carol.

Eamonn’s new scarf is finished! Now one is needed for Henry (on the left). Daughter Nicki’s bear. 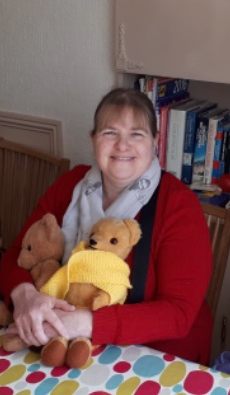 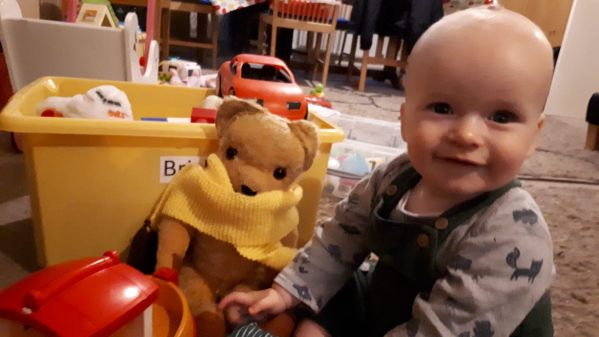 Here is grandson Jules, who obviously loves Eamonn and his new scarf!

Carol clearly enjoyed knitting that scarf, so cheekily we asked if she would like to make another. Black and white for either bear to wear at East Preston Under 11 football team matches. Granddaughter Daisy’s team.

“Yes” was the answer, but lockdown came. Football was off and wool difficult to get. But Carol persevered and finally handed over this wonderful black and white scarf. As you can see below. 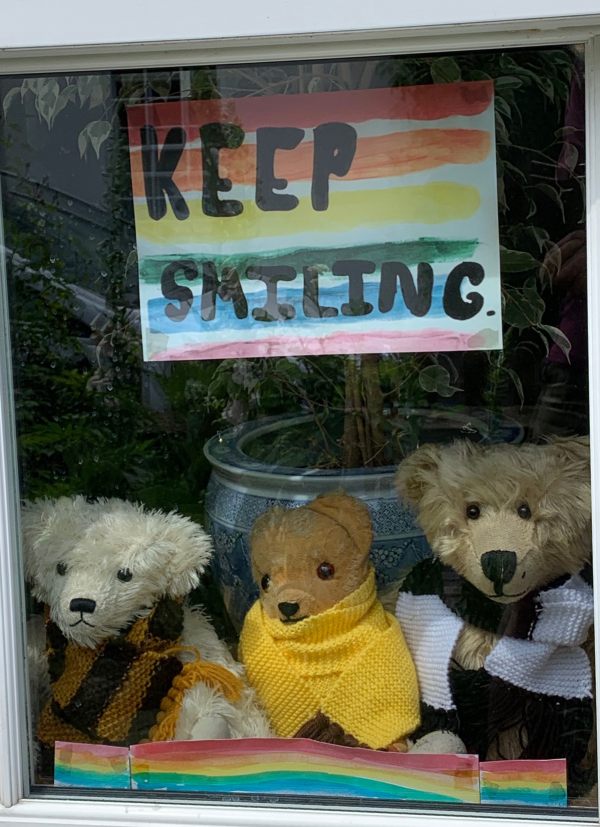 Carol is now making a blue and white one for a saddo Everton supporter’s teddy bear. Henry, in the picture above. And a purple one for her Belgium son-in-law, who supports Anderlecht. Two daughters have joined in and maybe we have a little cottage industry in the making.

As Carol says… “This has been very relaxing. Knitting in the evenings after all the chores are done. Just doing it on auto pilot and chilling out. I quite like doing two colours. A bit more of a challenge.” And now daughters Emma and Kelly have taken up the cause. So three of them are now click-clicking away and poor old David has to turn the volume up on the telly!

And they are using very special knitting needles. When it last rained, Bobby sorted out the under stairs cupboard. In doing so, he found a large box of knitting needles. Saved from the days when most ladies knitted and sewed and made their own dresses. So these scarves are made on Diddley’s needles.

“Can we order a blue and black one for Daisy’s ladies team, Worthing Town Ladies FC?”
“Yes. We will put it on the order list.”

You have seen this picture before but it is, of course, at Diddley’s Bench. Somewhere we haven’t been for over eight weeks. And Eamonn is modelling the original scarf knitted by Mary nearly forty years ago. 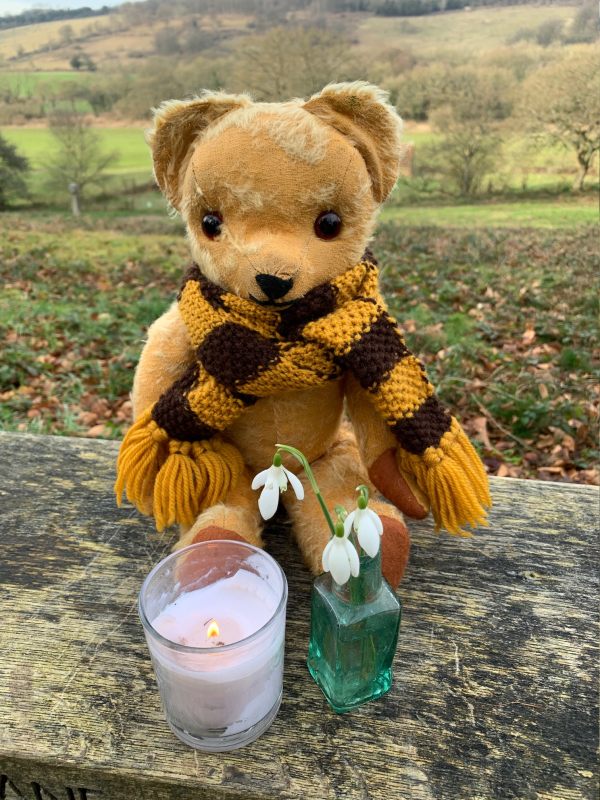