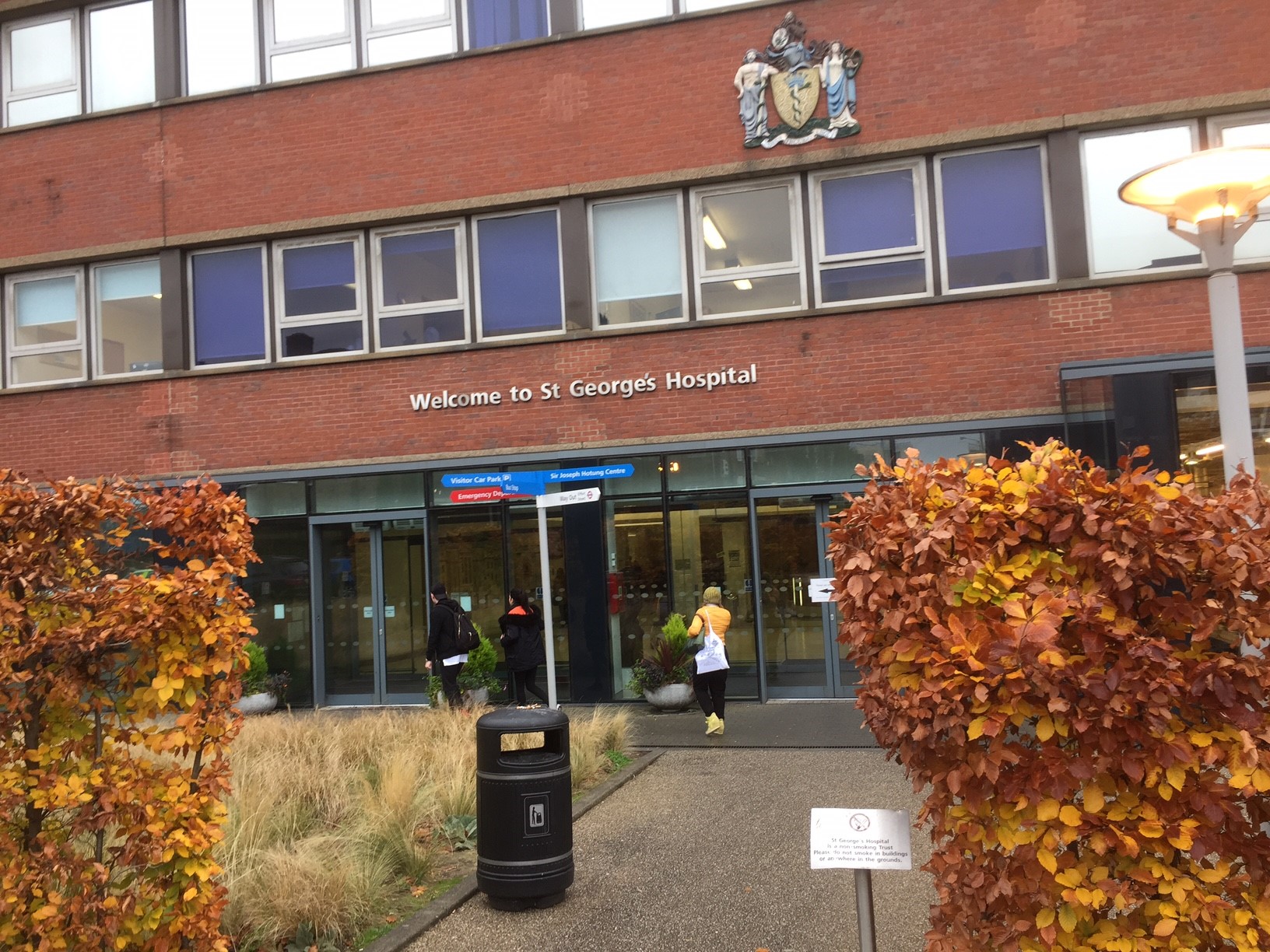 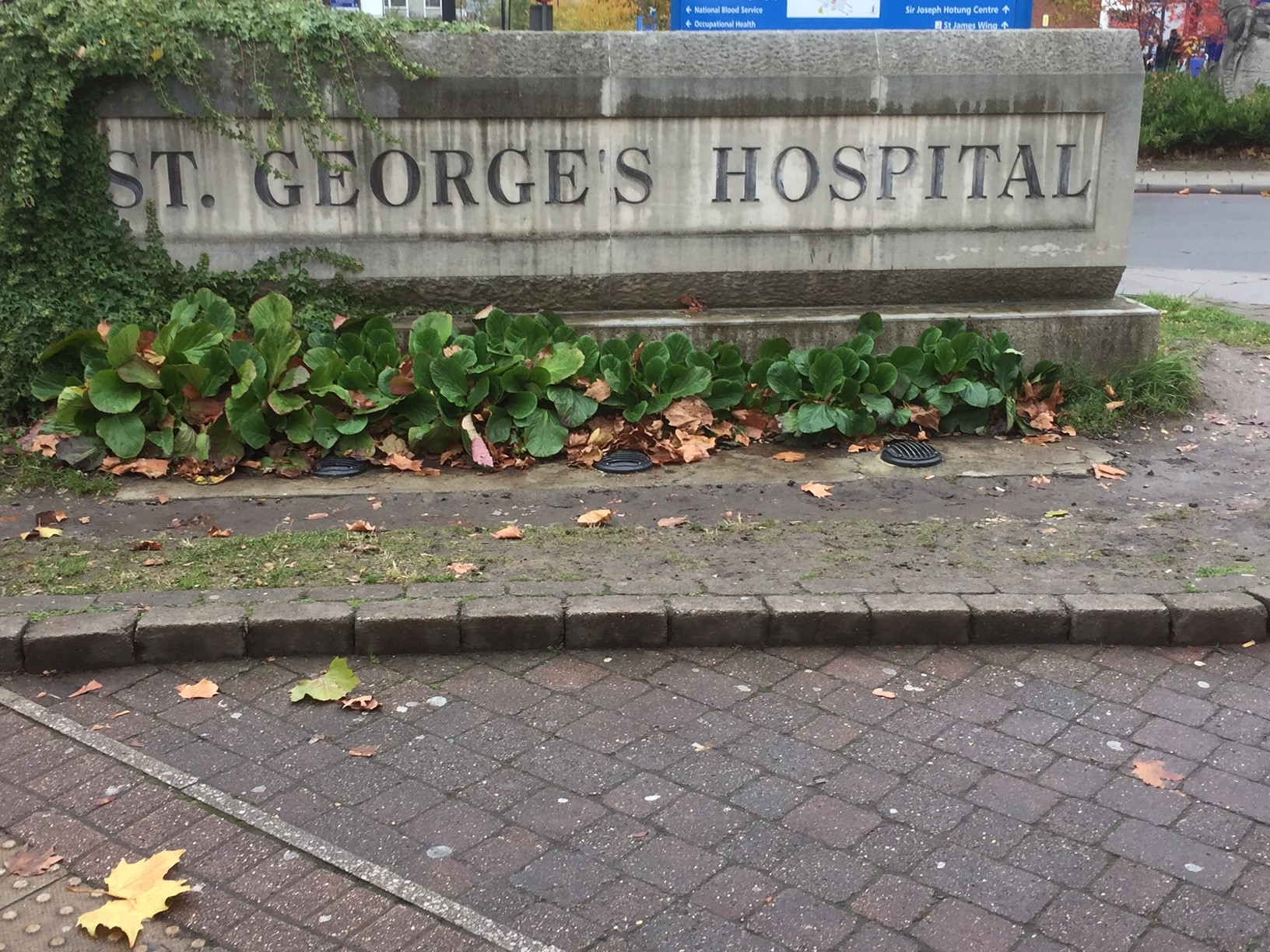 Bobby… “Once again my plans are hijacked. And, most importantly, I am without Bertie. Languishing in St George’s Hospital, Tooting. (Me not him). Sorry Bertie. The 999 ambulance couldn’t head south to pick you up.

Old and tall are a dodgy mixture. The taller you are the harder you fall. Especially on station stairs. Daft, unlucky. Was the scarf I left on the train that important to turn, slip and fall? Edd (there’s also Ed) and John in the ambulance were great. Driving me yet again to St George’s Hospital Tooting. Where my family and I have had such wonderful treatment from the Ruth Myles unit and the haemophilia nurses. Just for the record, my call to fame is “von Willebrands disease” A real nuisance at times, but has led to my feeling part of the medical family here. 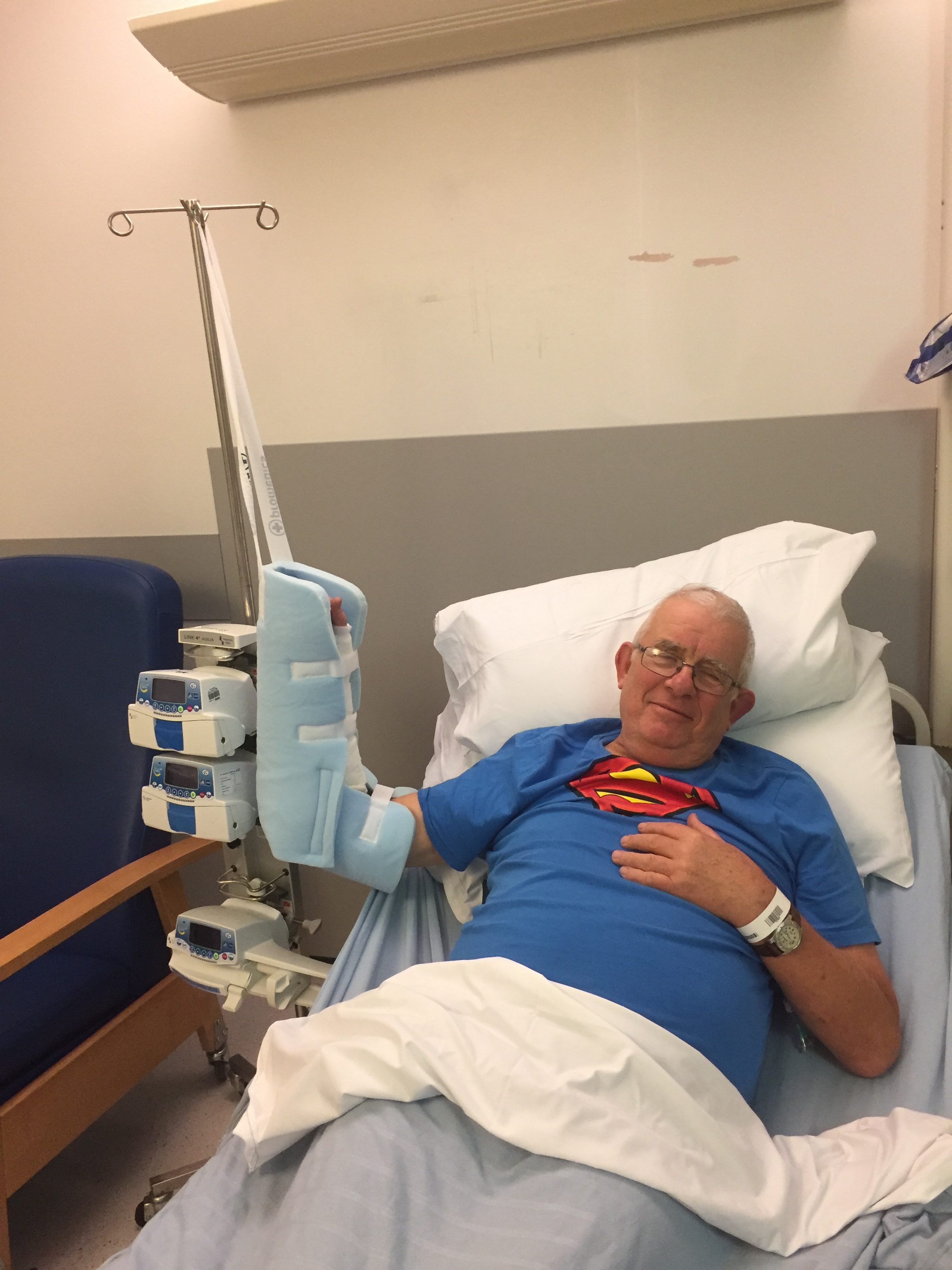 And here I am tapping away one fingered left handed. Takes a long time.

Here come the nurses to my private room. BUT WAIT!!

While typing this I am just about to be on the Vanessa Feltz show on Radio London about …. leafblowers. Why? Because Brian May isn’t happy about the row they make in leafy Kensington this time of year. And I am with him, albeit in not so leafy Tooting!

Bobby… “Yes. The marvellous St George’s Hospital Tooting. Broke my wrist. HANG ON THE NURSES ARE HERE ….. I’M ON RADIO LONDON TALKING TO VANESSA” …….. “We will come back” the nurses respond.

Leafblowers. Brian May of Queen complains about the noise the council make this time of year blowing leaves in posh Kensington. As I told Vanessa and the world. He is bit grumpy, considering the noise he makes with his guitar and should live in the country like his drummer mate? ??. Whatshisname?”

And I have an electric leaf blower that is invaluable and will be now especially so left handed. And it’s quiet.

Vanessa Feltz… “Well Bob, I hope you get well soon”

If you want to hear the full interview, go to: http://www.bbc.co.uk/programmes/p04dps1y. My bit is 2.34.40 in   …… (apologies for a little poetic license!) Please note, though, that the BBC only keep these recordings available for a while.

Bobby… “Back to Saturday night, I met the lovely nurse Rumer, whose namesake is making waves singing like Karen Carpenter amongst things  …. so heres a musical interlude –

Beautiful, but no one will ever emulate Karen’s voice within her brother’s arrangements. Possibly my favourite female singer of all time.

So thank you, Nurse Rumer. Like all at St George’s, it was nice to meet you.

Back here in Ruth Myles, I have new nurses Gemma from Birmingham, student nurses Craig and Rachel, both from the Emerald Isle. Nurse Hannah from my own birthplace, Sutton. Once of Surrey, but now Greater London. I was born in St Helier Hospital – just eight months after John Major. He has a blue plaque. I chose anonymity. And finally Alison. My nurse and friend to my family for so many years. There are many more. All lovely but. I couldn’t list all the names.

I would rather be on Dream Island, the pirate ship in Whitby or Laurel Cottage with Bertie. But needs must and I feel very lucky that vW gives me confidence for all my family how well they will be looked after by St George’s. To be honest, I wouldn’t mind staying a bit longer!” 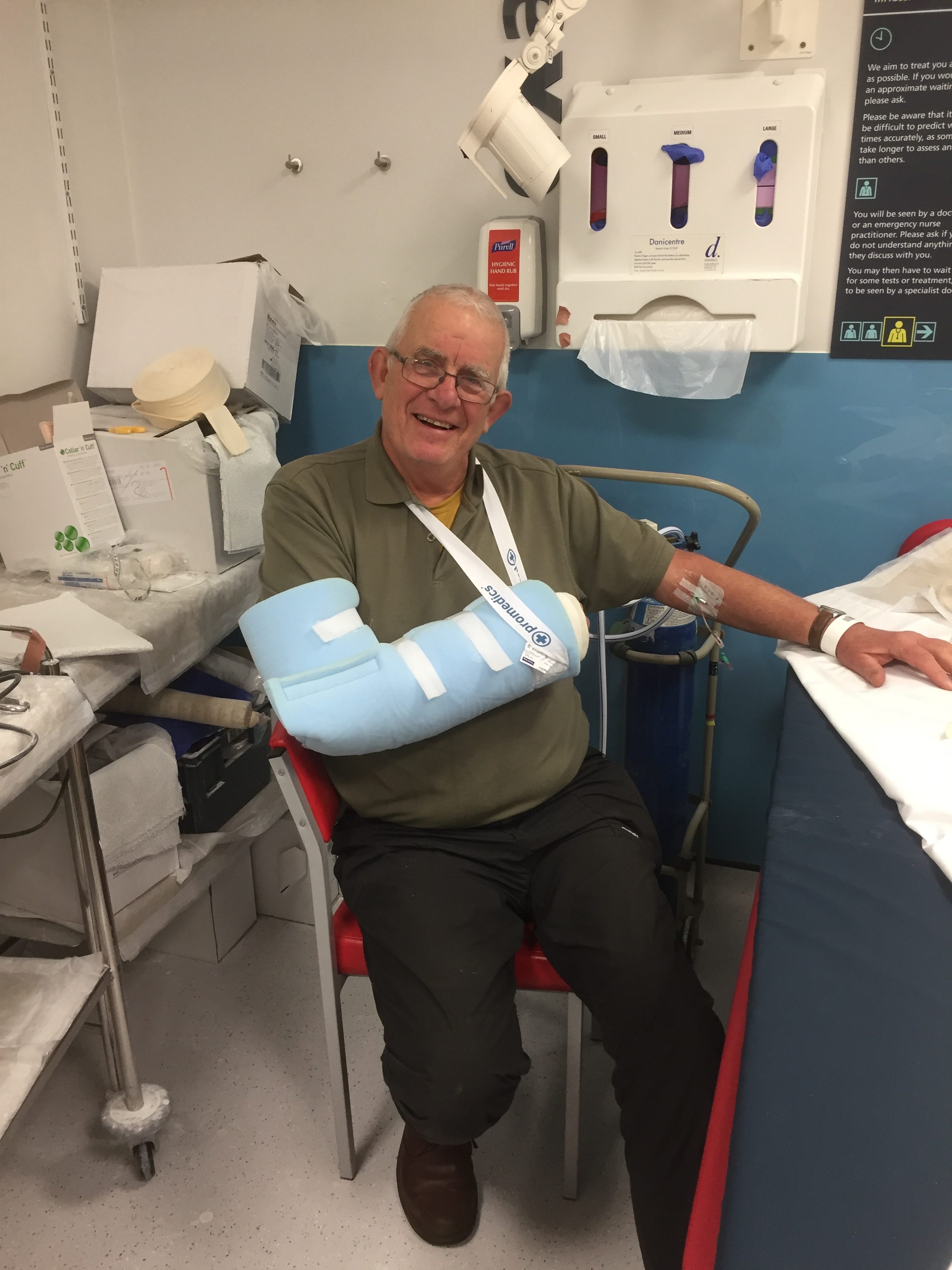 Plaster and photograph courtesy of Nurse Rumer. A & E!

This blog is written in the moment deliberately. Hopefully I will be reunited with Bertie well before it is posted.

Bobby… “In the meantime, I have found out who Ruth Myles was. A beautiful human being in body and soul. She became ill with leukaemia in 1988. In those days, a frightening diagnosis. Her battle revolved round this hospital, leading to palliative care and finally her death in 1989 at just 25 years old. A brief outline of a young life lost that created funding towards the Ruth Myles ward. Specialising in haemotology conditions. Diseases of the blood. Opened, as you can see, by Mrs Basil Fawlty. Prunella Scales.” 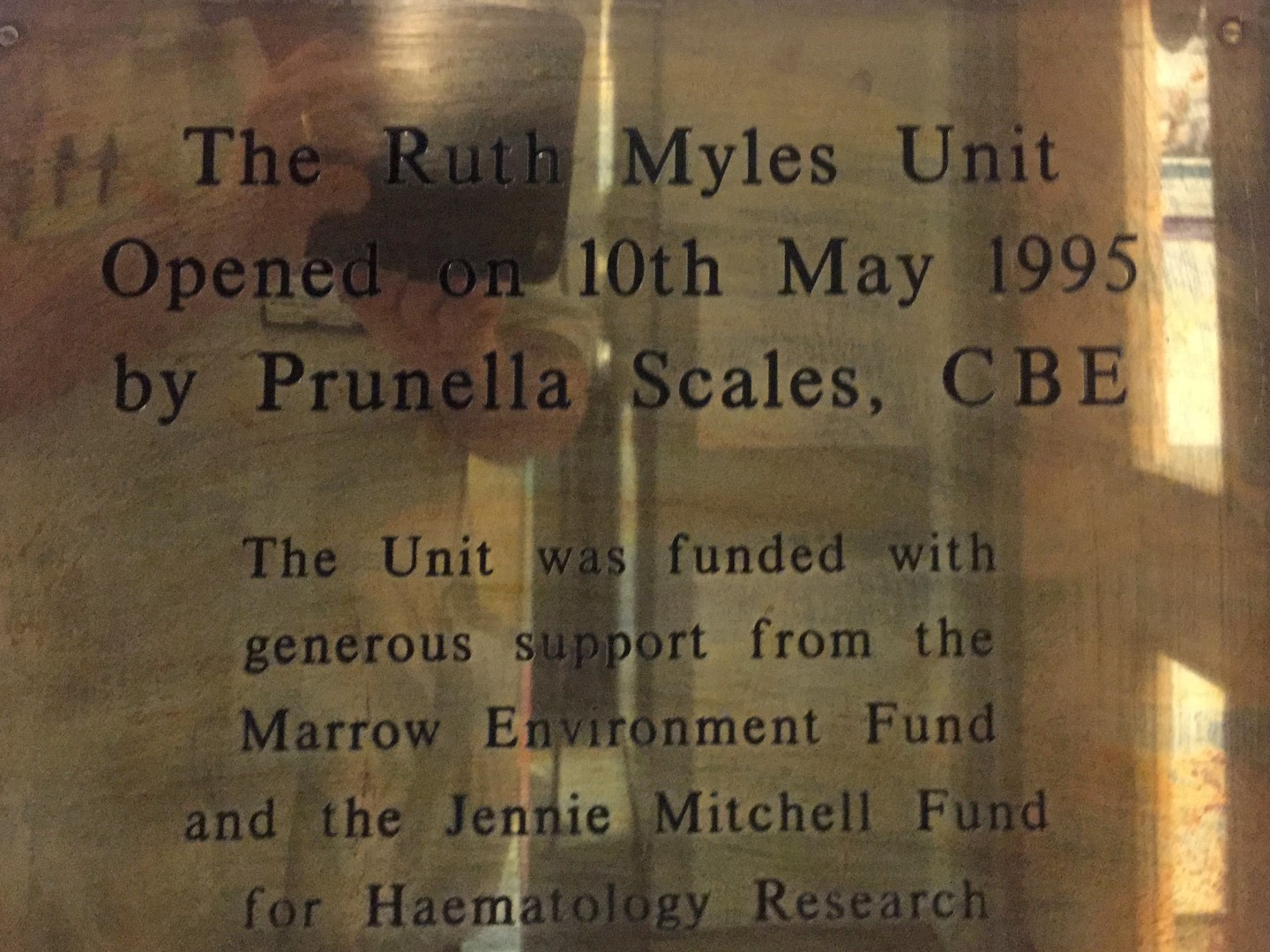 Photo of plaque, which reads: “The Ruth Myles Unit, opened on 10th May 1995 by Prunella Scales CBE. The unit was funded by generous support from the Marrow Environment Fund and the Jennie Mitchell Fund for Haematology Research.” 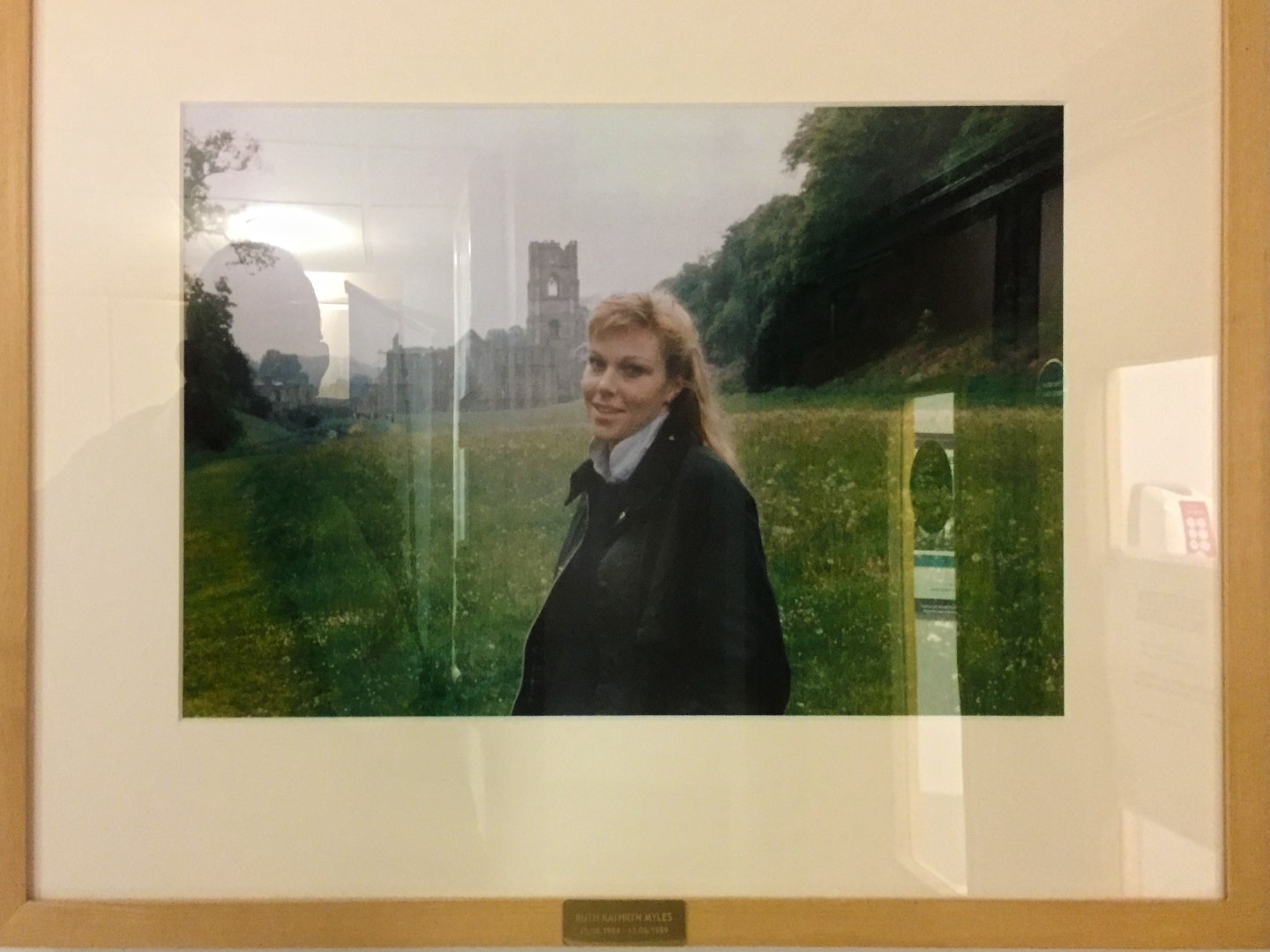 This blog is not a history of the hospital, but here’s a couple of interesting plaques. 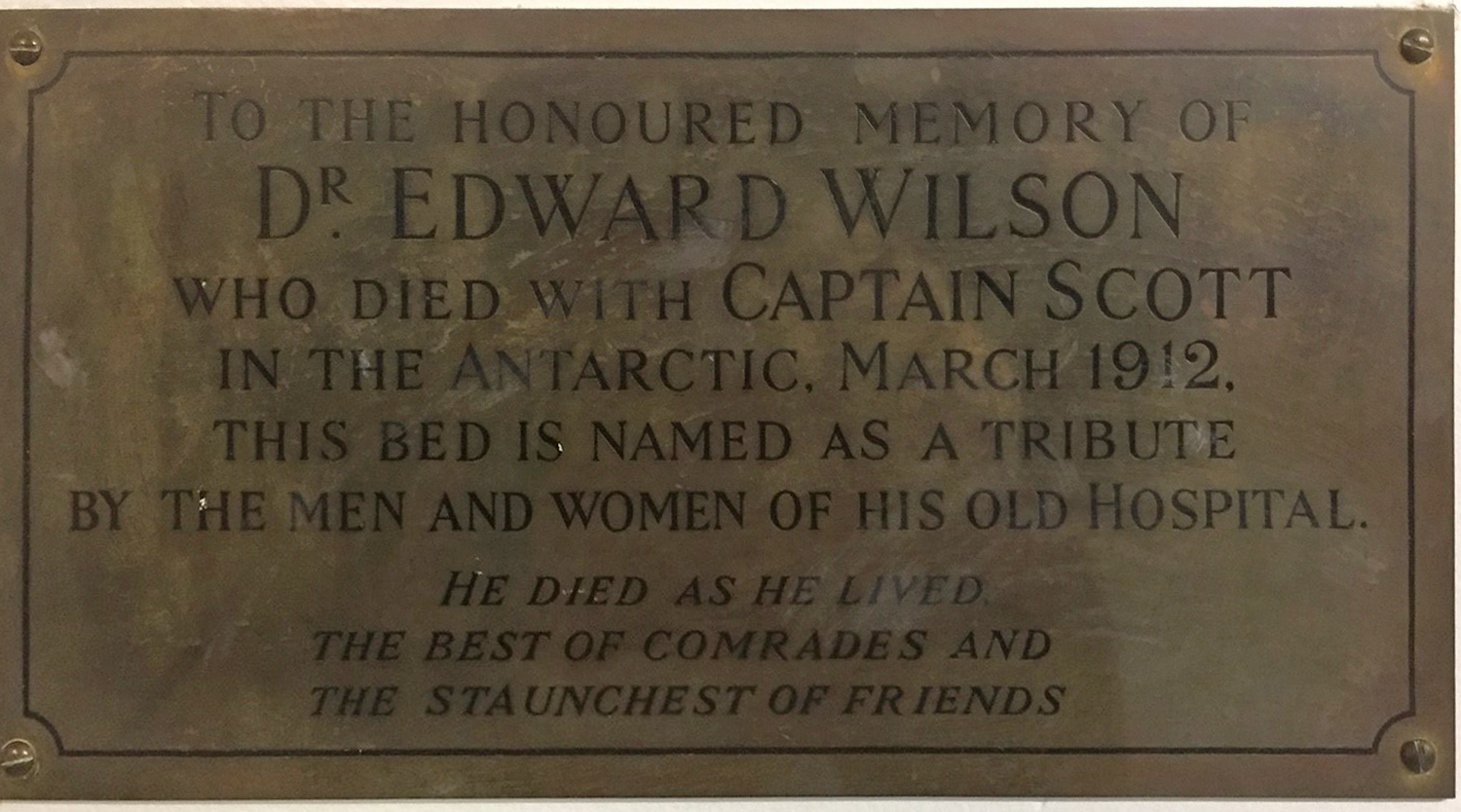 First Plaque, reads: “To the honoured memory of Dr Edward Wilson who died with Captain Scott in the Antartic March 1912. This bed is named as a tribute by the men and women of his old hospital. He died as he lived the best of comrades and the staunchest of friends.” 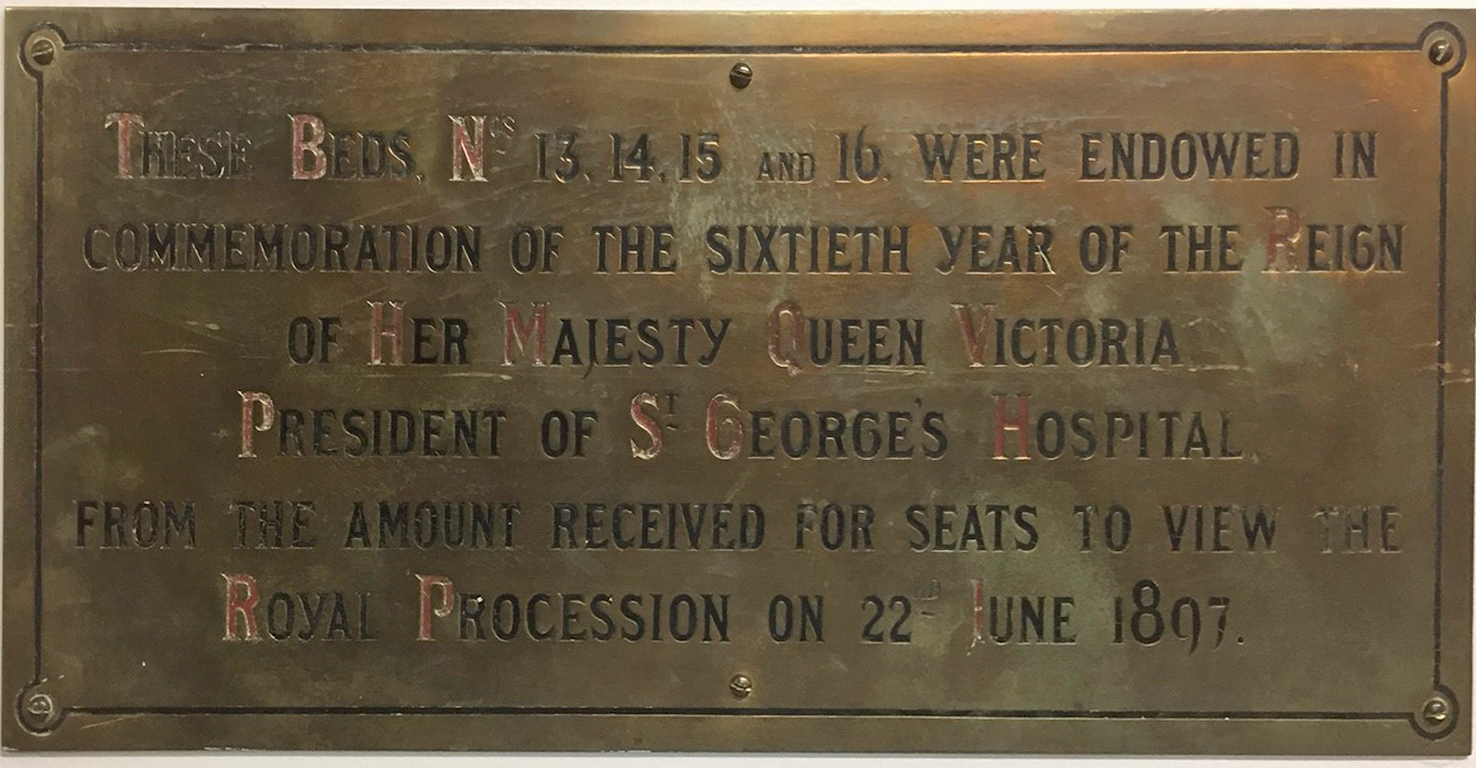 Second Plaque, reads: “These beds nos. 13, 14, 15 and 16. Were endowed in commemoration of the sixtieth year of the reign of Her Majesty Queen Victoria President of St George’s Hospital. From the amount received for seats to view the Royal Procession on 22 June 1897.

Walking outside in my NHS nightie to take some pictures, I met Trevor coming the opposite way with an elevated arm.”

Bobby… “Wouldn’t Fulham have been nearer?”

Trevor… “Long story mate. During the second half the ball was belted into the crowd straight at my grandson. Stuck my arm out and deflected the ball. Next day it swelled up; came here; busted wrist.”

Bobby… “Hero! Much more exciting than mine.” 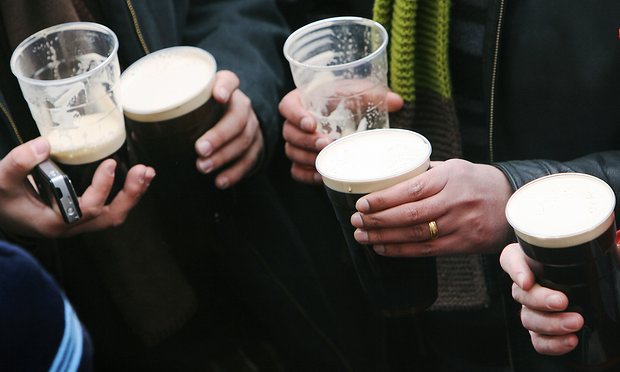 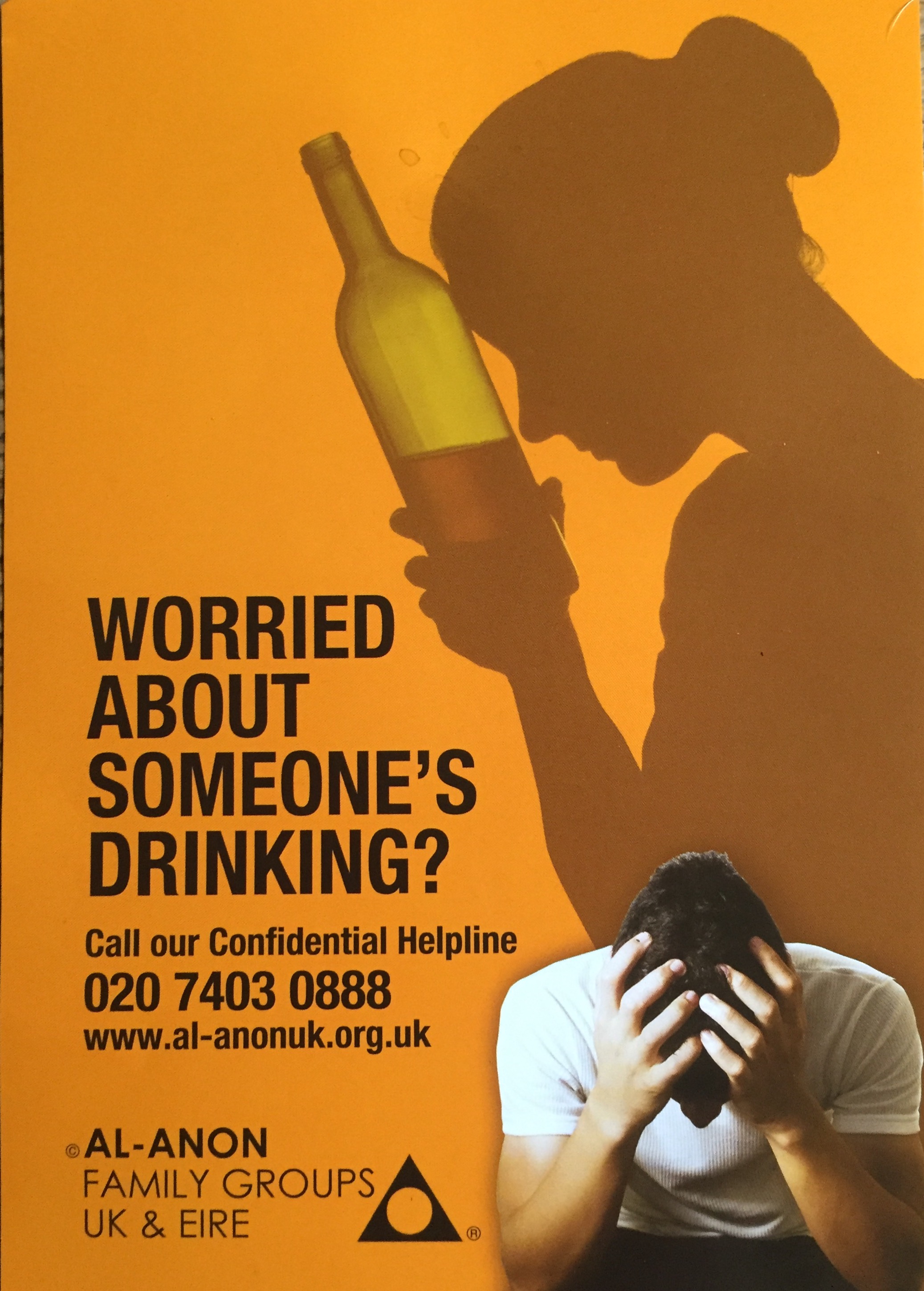 Lighting a candle to Diddley

It’s a virtual one here in one of a number of chapels to various faiths. 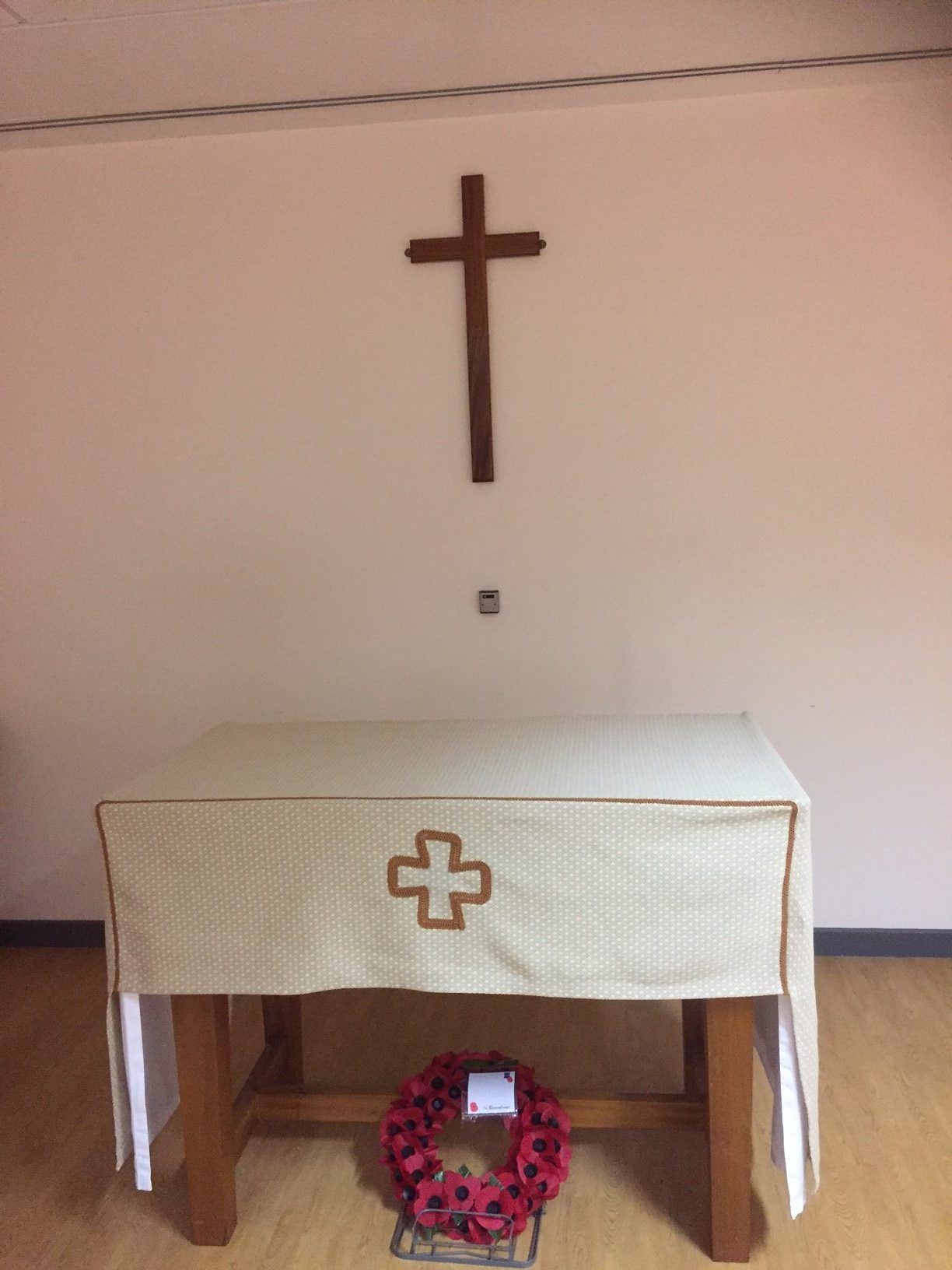 Lighting a virtual candle at The chapel in St George’s Hospital. 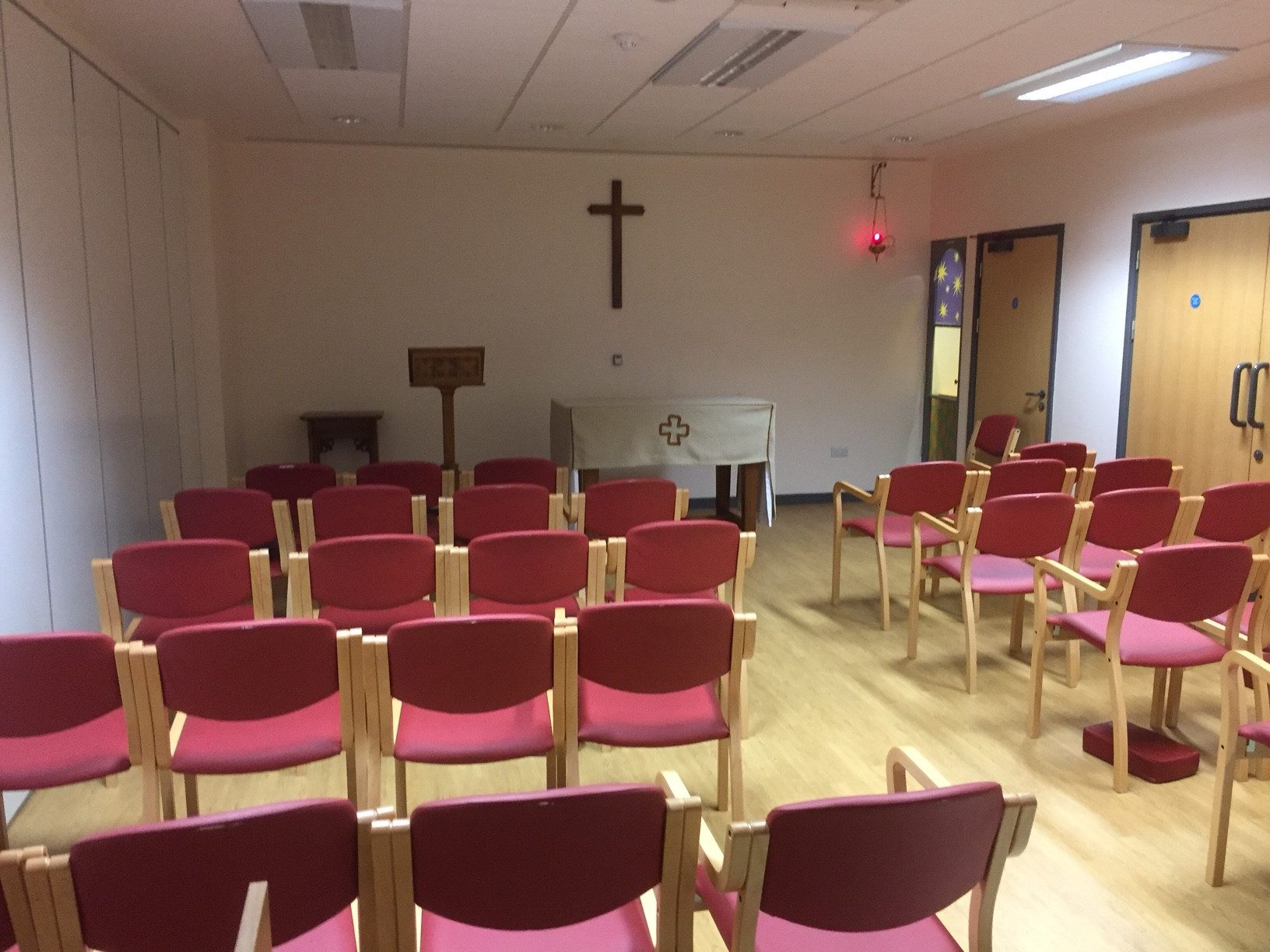 The Chapel at St George’s. One of a number for different faiths, making you think about constant reference to Muslims and so on. We all get ill and are all equal.