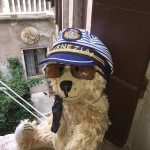 So the romance was over before it had even begun (see Brief Encounter). Good luck Giz A La (Gisele). It was fun. So, here I am. Venice. Walking out of the station, you look down on the Grand Canal. On a scene quite unimaginable the first time. But for a first time you really need to come by train. Planes, coaches and cars are all outside the ancient city. The railway station is right in the middle.

Venice Santa Lucia Station. Down the steps. Walk. Waterbus. Gondola. Launch. A man with a barrow.

A Man with a Barrow.

The flight of steps down presents another world. A time warp of fantastic ancient buildings. A hurly burly of masses of boats. Wonderful colours. And a teeming mass of tourists from every corner of the globe. None more noticeable than our friendly Japanese and their bleedin’ selfie sticks. (Sarf London). Andrew, Bobby’s son, threatened to get one for his birthday – but had to consider extricating it from where Bobby threatened to shove it. Can you imagine showing your holiday snaps back in Yokohama. “Aaah so… me in front of bridge.” “Aaah so… me in front of church.” “Aaaah so… me in front of something behind me I can’t see because of my stupid grinning Japanese face.” But… they are so polite. So friendly. Just like the Brits abroad. Union Jack shorts and a can of Fosters.

We digress. Bobby soon got over the cultural wonder and entered nerd clerk mode. Must find the hotel. Retrieving his plastic wallet labelled “Venice”, which includes a printout to find the hotel from the station. With our wheelie hold-all, we tramped over dozens of little bridges. Courtyards and alleyways. Finally arriving at a metal door in a scaffolding clad gloomy alleyway with the number 1741. Nothing else. Just the door. This must be it?

Rang the bell push and the door opened into a decrepit courtyard and the less than friendly Ester. The hotel was upstairs it seemed. Young Ester didn’t offer any carrying help, but opened the door into a sort of hostel. This was Ca’ Spezier. Economically priced, but not as cheap as a shared dormitory.

The surprise was usurped by her requirement to pay in cash. Then, and no later. Bobby didn’t have the cash and was marched back over all those bridges and alleyways to the nearest cash point… back at the station. With cash in hand, young Ester seemed much friendlier. Back at Ca’ Spezier, she showed him round the shared bathroom and the DIY breakfast.

Back in our somewhat basic room, I could see his concern. Until he looked out the window. A decaying, wonderful courtyard – that took your breath away. Would it fall down before we left, or had it always been like that? Just wonderful.

The view from the bedroom window. Fantastic.

Ca’ Spezier was the strangest hotel/guest house we had ever stayed in. Just look at the notes on the door. But, being cheap and rather intimate – with shared facilities and a shared DIY breakfast, we did meet some brilliant fellow guests. Like Harry here. From Indonesia.

Bobby asked him: “Were you named after Prince Harry?” “No, no. Harry Potter. My parents thought it would help me get on in the world”. He certainly got on well with me. And then there was Simone, with two young children. An Italian dad, escaping his drunken wife for a few days with his bambinos. In a quandary whether to go back or not.

Venice spread out before us like an exquisite jewel. In no time at all, all plans of famous tourist sites were abandoned. Too many people. Just buy a water bus ticket for a day and go wherever it takes you. You won’t be disappointed. This blog ends in a lot of traditional pictures of this wonderful city. But, Bobby did have his moments.

Sitting on the steps of a cathedral (next to me in my Venezia hat), he studied his street map. A young lady said hello and sat beside us. Clearly I was the attraction. They chatted and chatted… and chatted. I nodded off, but was woken by music. She was a student from Padova studying for a few days. Not that far from Venice. Bobby, trying to impress, said “Shakespeare”. She replied “Padua”. He said “There’s a song about that!”. Frantically Googling “Padua”, he found this:

Bobby… “I make no apology for putting a few Kiss Me Kate songs in. Many years ago, the firm I worked for got 15p Theatre tickets if you could go that or the next night. We went to loads of shows. Memorably, Kiss Me Kate. Three times in a fortnight! Nicola McCaufliffe.”

And here we were in Venice, with a young student girl listening to Howard Keel in “Kiss me Kate”. The musical adaptation of “Taming of the Shrew”. She seemed amused.

Later that afternoon, we entered a church that had become a museum of musical instruments. There, a concert was advertised for that evening in another church nearby. Leaving me in Ca’ Spezier, he queued and made friends with a Dutch couple.

Bobby’s selfie with the Dutch Couple. How ironic is that?

Bobby… “Vivaldi in Venice. Can it get any better?”

By twinkling lights on the grand canal, he came back by water bus. And lost his glasses!

Prescription sunglasses and a head torch were a very temporary solution.

Bobby, being what he is, was just as interested in the rubbish collection. How things were delivered. Weird trams…

A tram, with only one central rail – and rubber tyres.

I wonder what’s in those bags?

The Glory that is Venice…

Remember the week just gone was Mental Awareness Week. Click here to read more about it.