The home of Mindfully Bertie. A Cottage full of love, memories, grandchildren. Back in 1998 it was quite different. Diddley was already living here. Facing losing it in unpleasant divorce. When, at the eleventh hour and fifty nine minutes, newly married she was able to email the entire office she and Bobby worked in……..

“Thank you. In my darkest hour I dreamt of being saved by a handsome prince on a white charger. Little did I expect white van man in a boiler suit”. 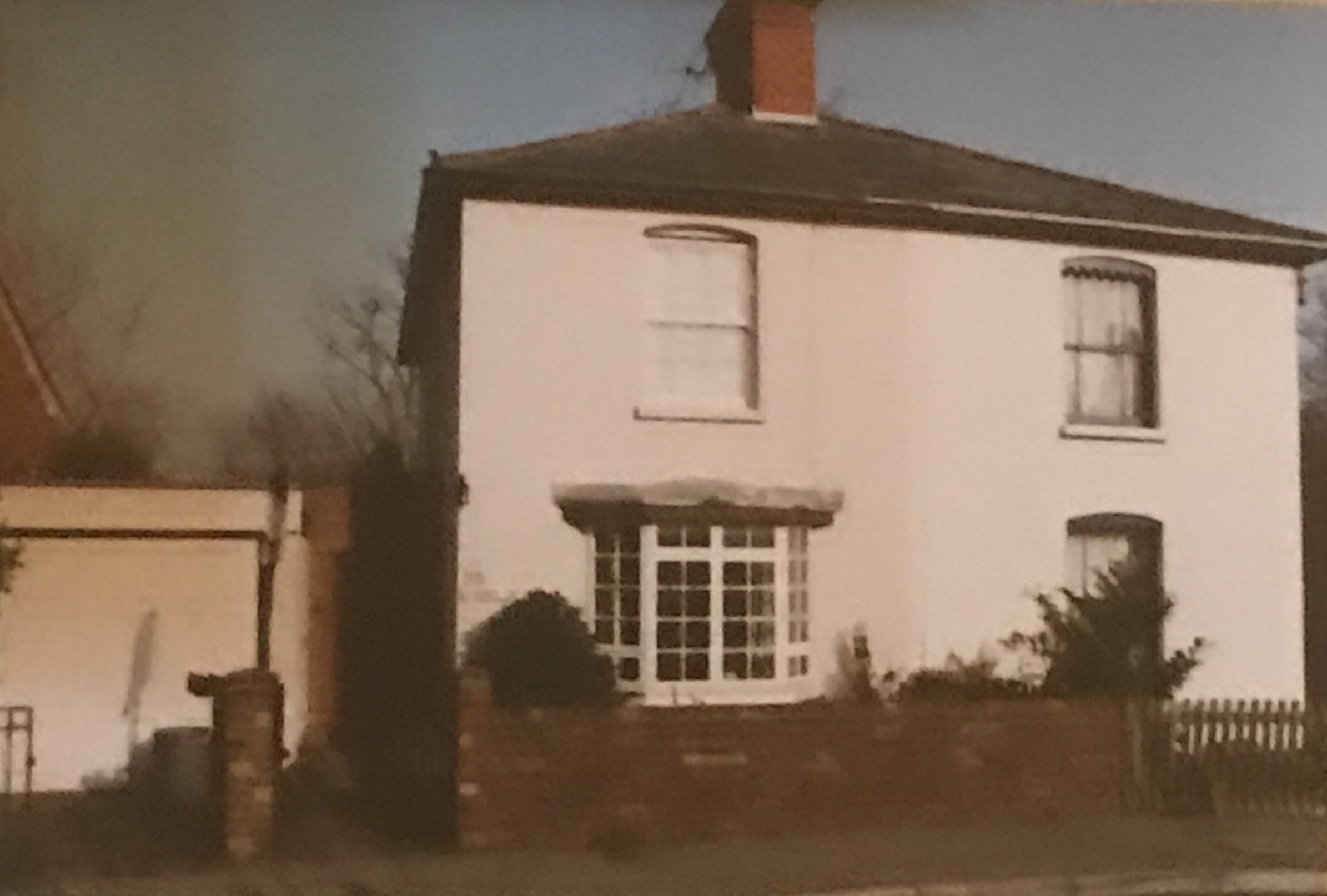 Those were heady days for an explosive romance. Including, most surprisingly, leaving the village for a new start. He didn’t really like Laurel Cottage, and she was a little offended by his opinion of it. All the way to Storrington they looked at prospective love-nests. But then, one enlightened morning, he came to his senses. “Let’s stay here and I will do the Cottage up”! At fifty four, he suddenly had an explosion of energy that lasted for the next few frenetic years. Not just the house, but the garden was transformed. The latter just as she wanted it. Victorian reclaimed brick paths. “Can you make it curved herringbone?” … 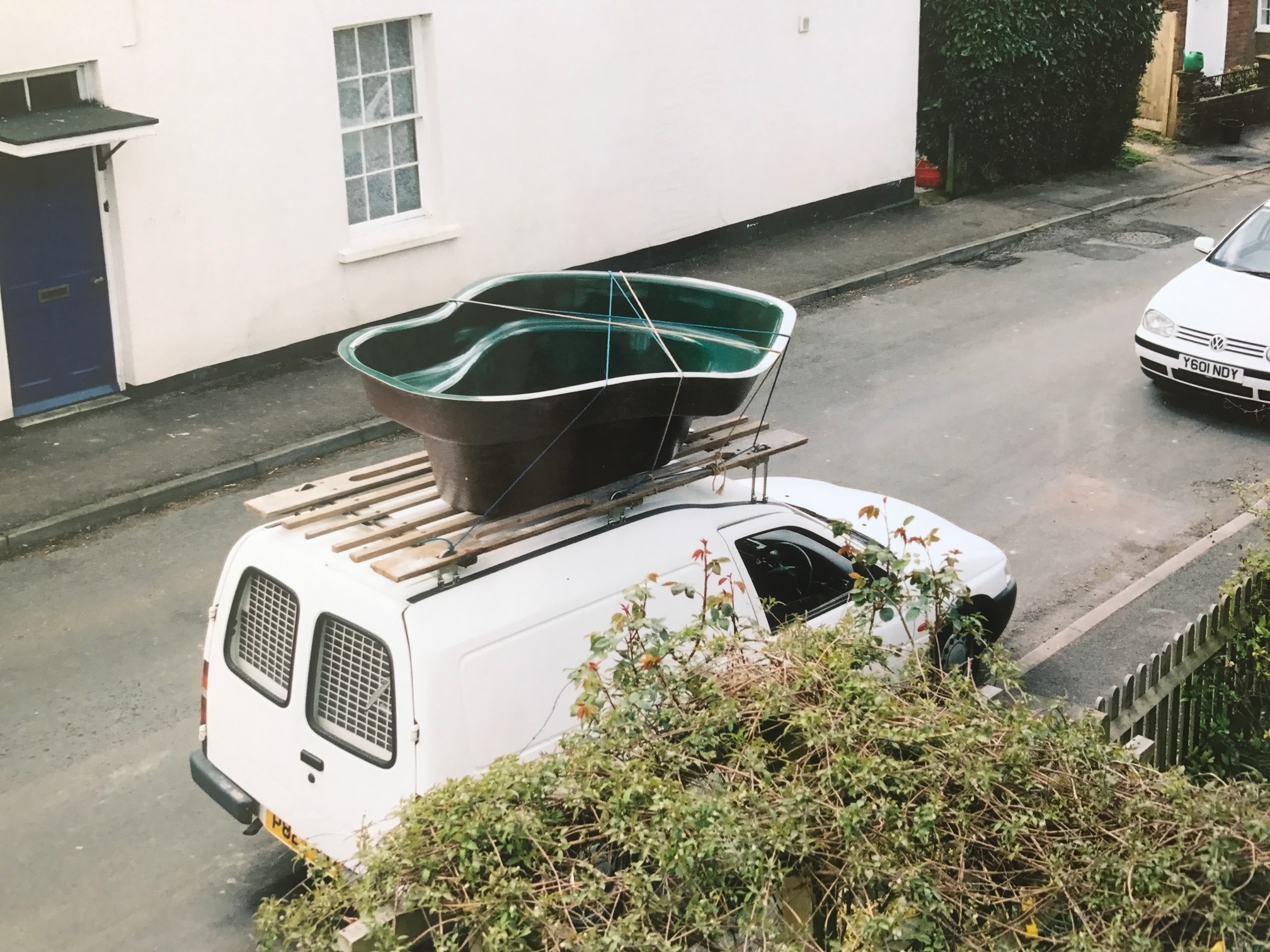 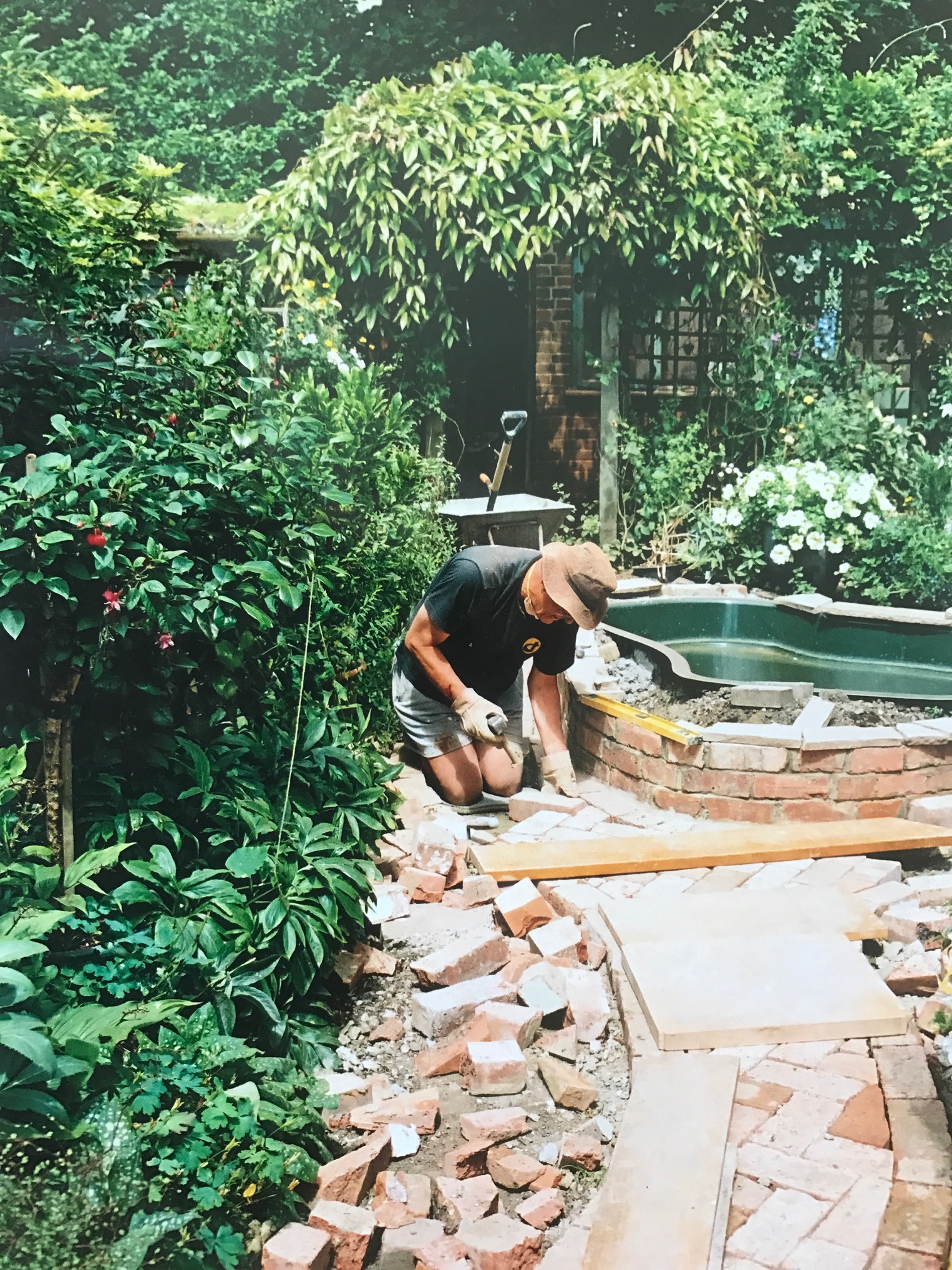 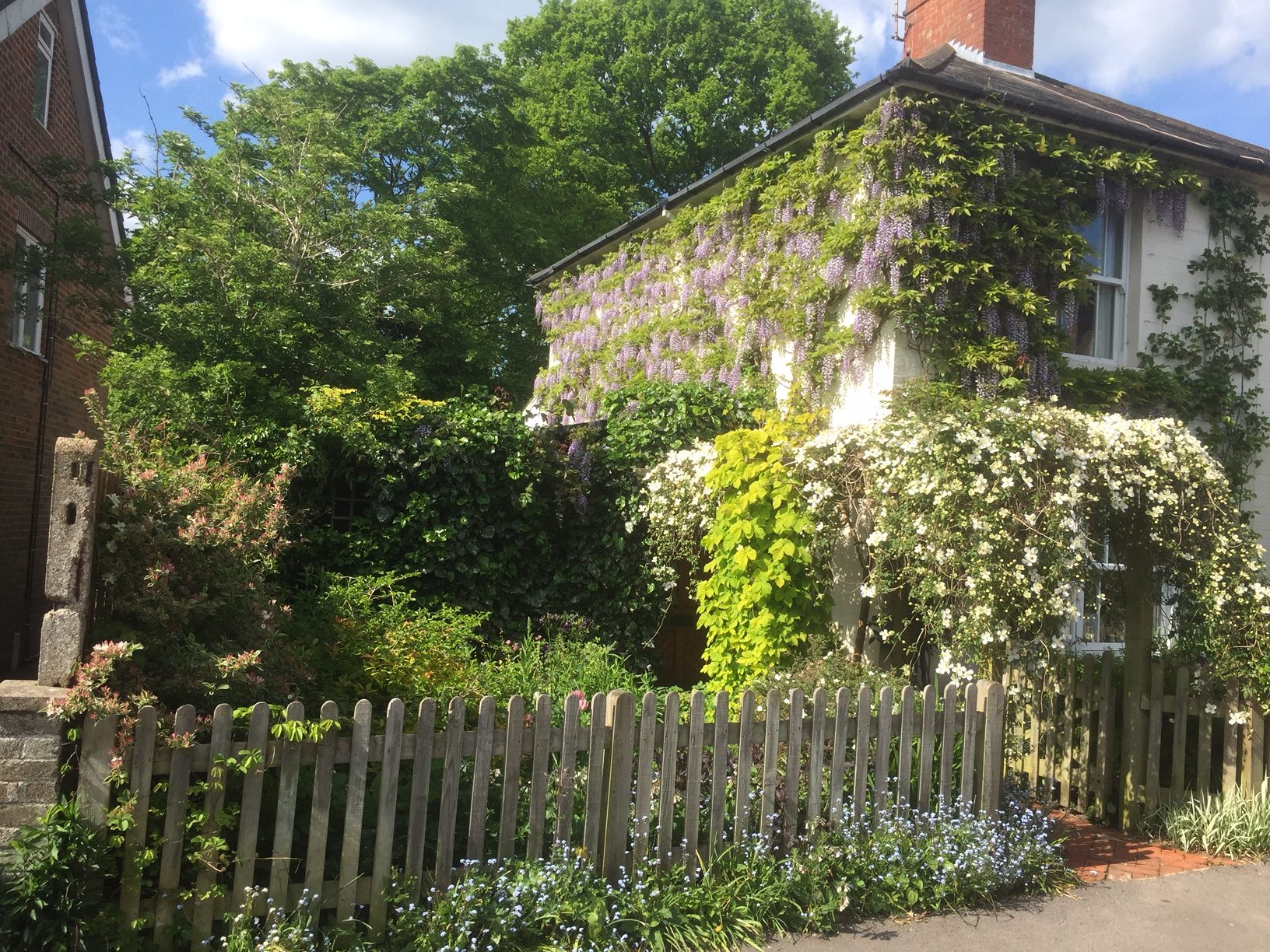 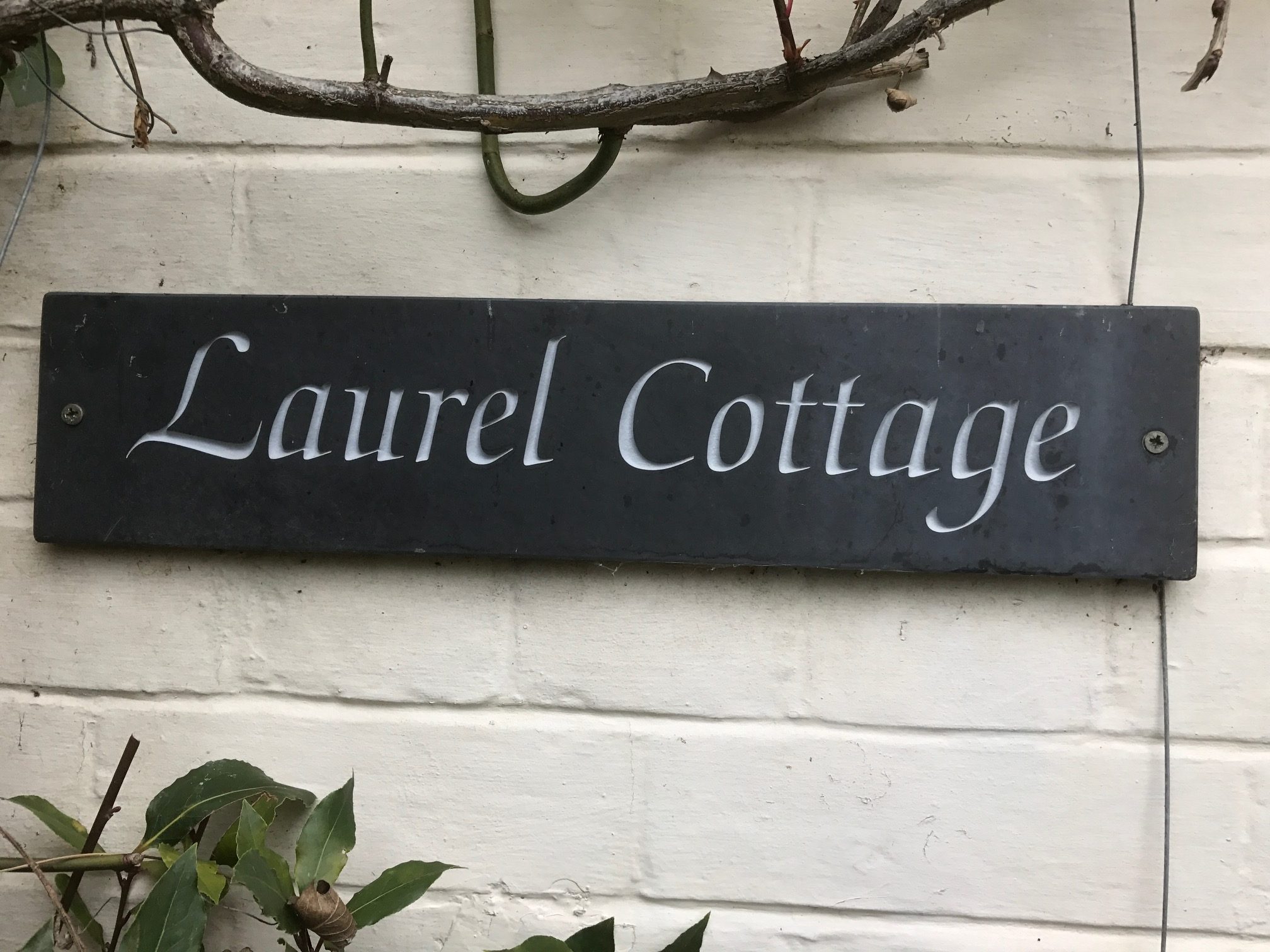 Made in Wales of Welsh slate. 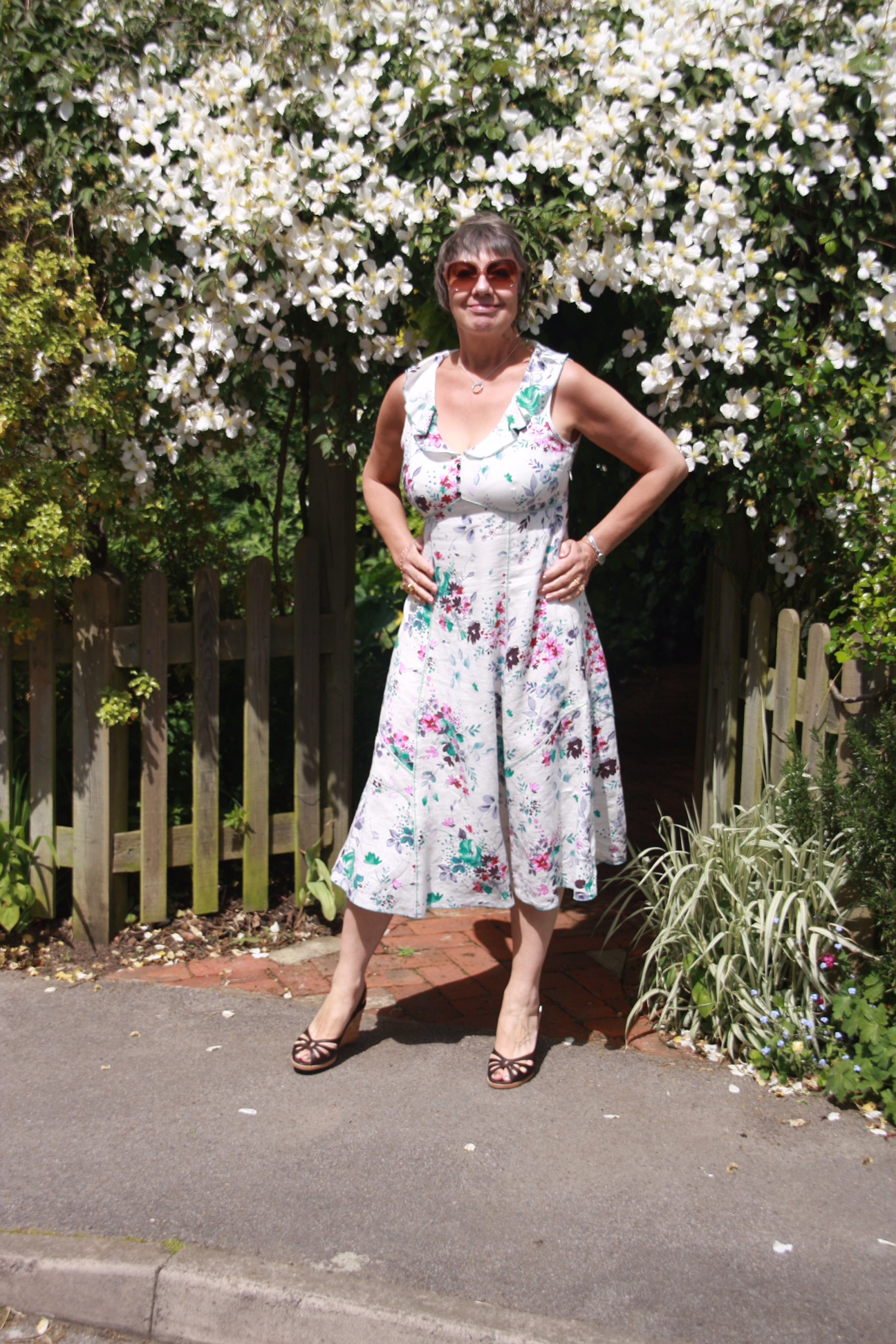 Today, white still dominates, but colour did creep in. More than anything, the Cottage became the family home. Welcome to all. Friendly, but still Granny’s house.

It’s one of the oldest houses in the village. Built 1870-ish. Surrounded by orchards then, I believe. A quirky building, with Vitae Cottage next door in sharing “flying freehold”. Essentially, this was houses being built together with no intention of being sold separately in later years. At its height, a whole street of terraced houses for workers could be built this way. For Laurel and Vitae Cottages, this means overlapping parts of the buildings. Put it this way. Sitting on the toilet in Laurel Cottage you are over the extended kitchen in Vitae. Plumbing has always been at the disadvantage of next door if there has been a leak. Sorry Chris! From the garden of LC, this bricked up window used to peer out from next door. 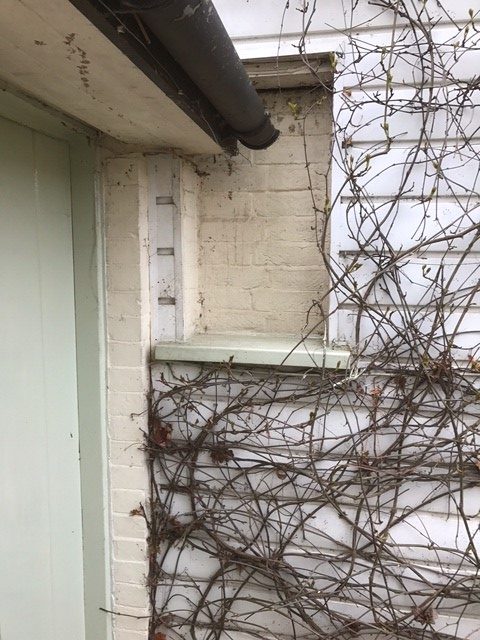 And woe betide a row by the back stairs. You are almost in next door! Yes, it has two staircases. Which confused Bobby no end when he first went there, and people appeared seemingly out of thin air. 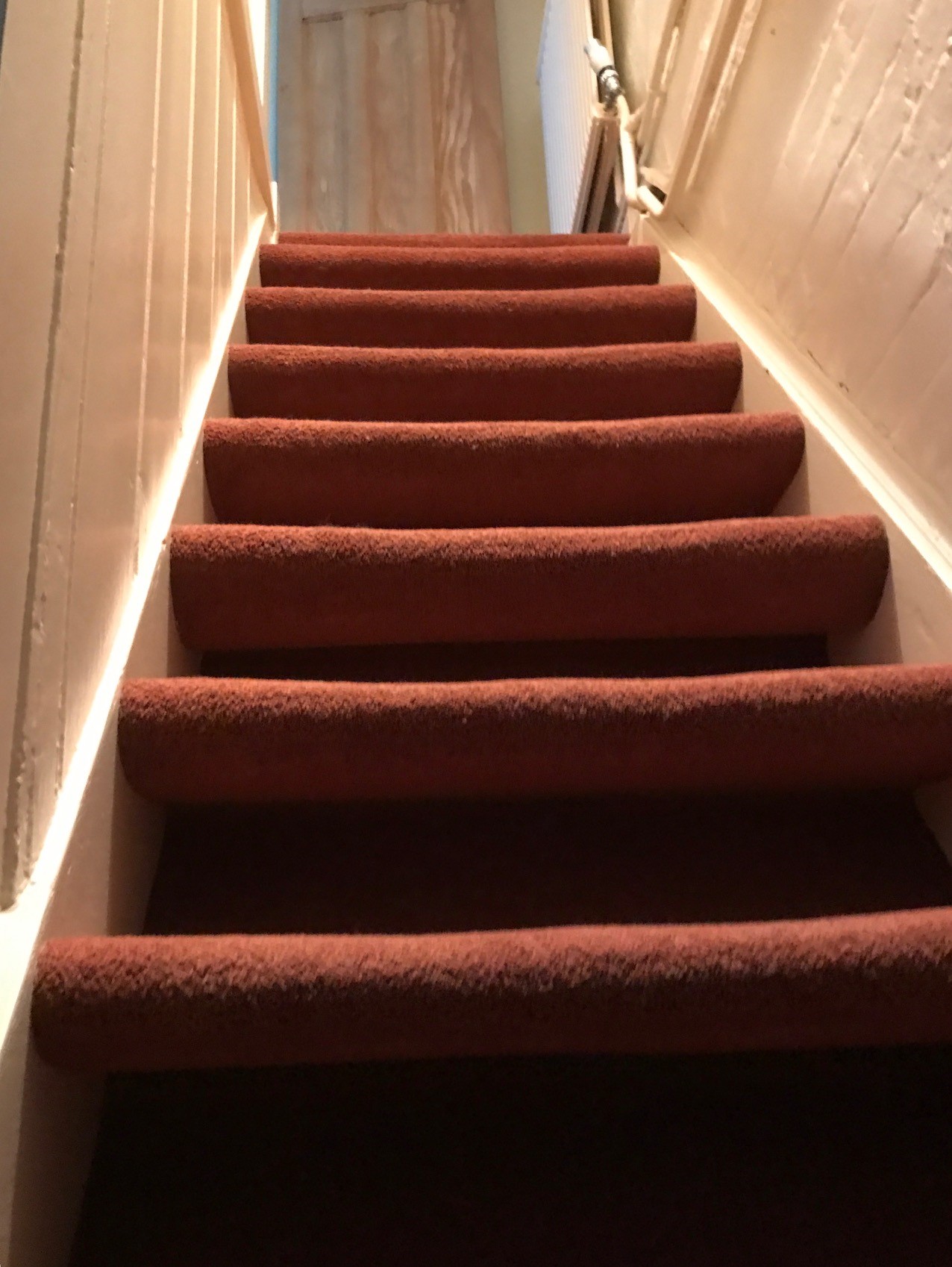 A secret staircase. The underside is in Vitae Cottage.

We have a folder of deeds and debentures and so on. Beautiful copper plate writing, but very difficult to read. One day, Bobby will try to find out more of the history. Particularly as some of the documents refer to the land and the turnpike road before the cottages or Warwick Road were built. This article is about the home rather than the house. And his good fortune in coming to South Holmwood village. Surrounded by the Surrey Hills. For the blog in particular, the village will feature in future editions. 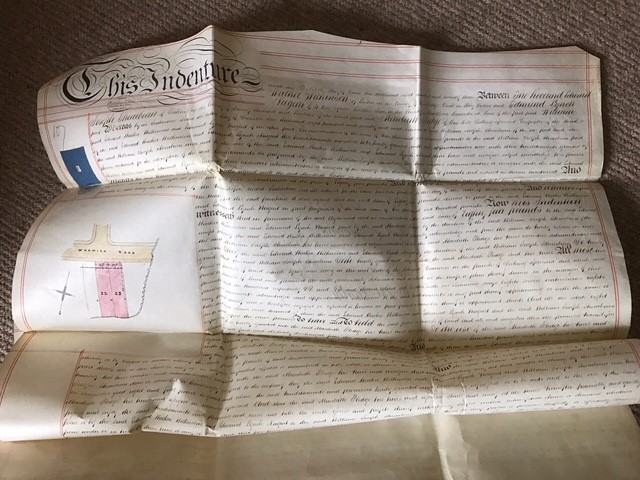 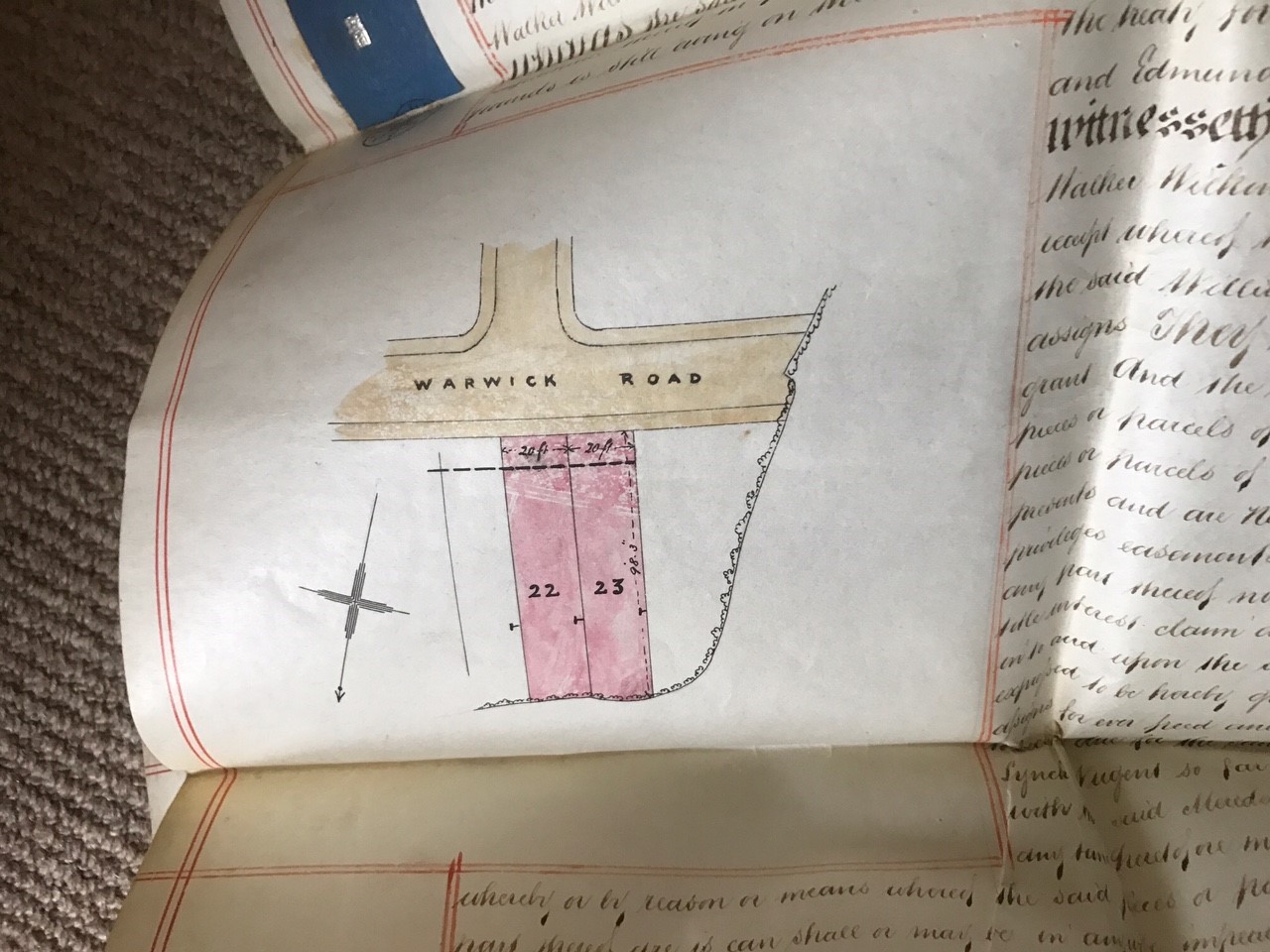 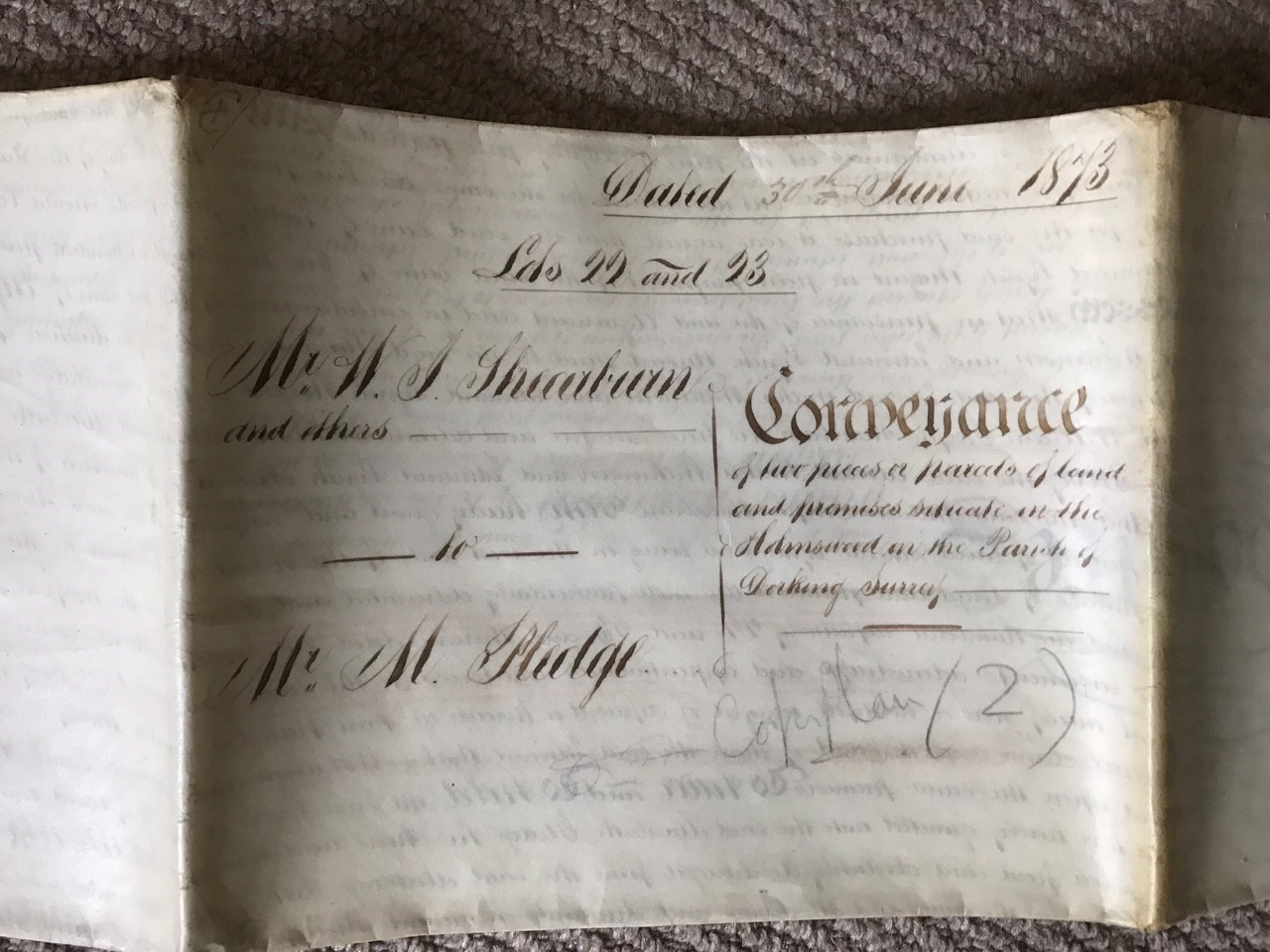 How on earth did the clerks handwrite those documents?

For some years, following being Best Man at the wedding, they took me on holiday with them. But, gradually, this dropped off and I languished on the front couch with a load of toy, inferior bears. But then, of course, he needed me when the chips were down. Chief mourner at the funeral restored me to my rightful position. Even watching him on such a sad day, soaking up the admiration of a congregation laughing at his jokes in a funeral tribute. Knowing he would never stop, but for the time limit imposed by the wonderful Virginia. Even then, he practised in front of the mirror with a timer to use every single second. 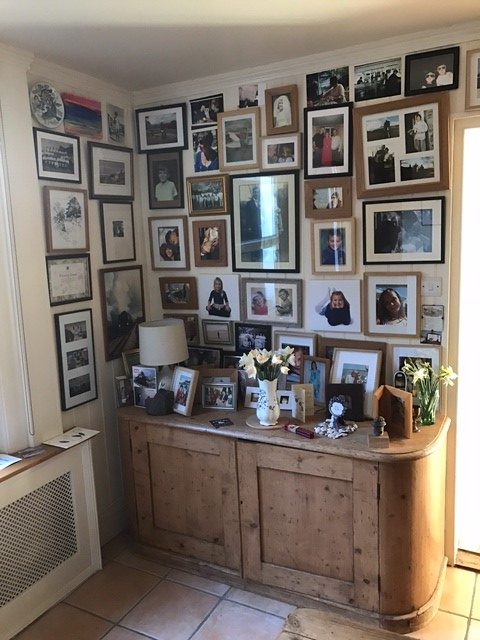 A wall of memories and grandchildren. 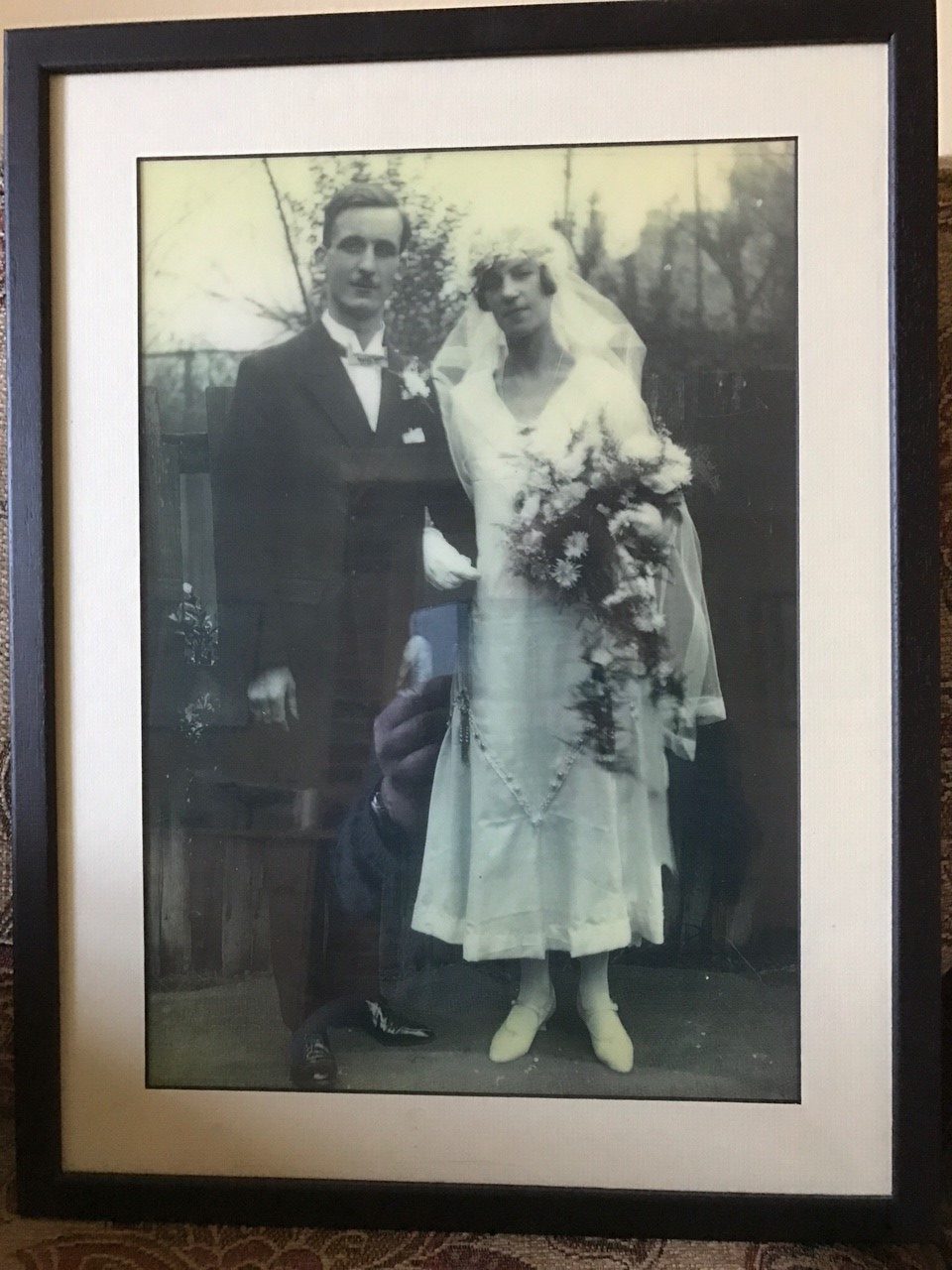 The blog has brought Laurel Cottage a little fame. Especially when that wisteria is in flower. But, success is measured by what? Well, one young lady told Bobby she loved coming to the Cottage when she was still a child at Halloween. When Diddley made such a fuss of the village children. They called it the “Jungle House”. And that is what it is. A garden that is threatening to envelope the house at times. That wrecked the roof of the old garage. Where gardening is serious pruning at this time of year. People tell us they love the garden when the wisteria and montana are flowering. For Bobby, it’s the armandii. The magnificent clematis hidden away in the back garden. So, for that, here is Kipling’s take on it. The Glory of the Garden.. ps Bobby hates Laurel but loves the name. How daft is that!

The Glory of the Garden

OUR England is a garden that is full of stately views,
Of borders, beds and shrubberies and lawns and avenues,
With statues on the terraces and peacocks strutting by;
But the Glory of the Garden lies in more than meets the eye.
For where the old thick laurels grow, along the thin red wall,
You’ll find the tool- and potting-sheds which are the heart of all
The cold-frames and the hot-houses, the dung-pits and the tanks,
The rollers, carts, and drain-pipes, with the barrows and the planks.

And there you’ll see the gardeners, the men and ‘prentice boys
Told off to do as they are bid and do it without noise ;
For, except when seeds are planted and we shout to scare the birds,
The Glory of the Garden it abideth not in words.
And some can pot begonias and some can bud a rose,
And some are hardly fit to trust with anything that grows ;
But they can roll and trim the lawns and sift the sand and loam,
For the Glory of the Garden occupieth all who come.

Our England is a garden, and such gardens are not made
By singing:-” Oh, how beautiful,” and sitting in the shade
While better men than we go out and start their working lives
At grubbing weeds from gravel-paths with broken dinner-knives.
There’s not a pair of legs so thin, there’s not a head so thick,
There’s not a hand so weak and white, nor yet a heart so sick
But it can find some needful job that’s crying to be done,
For the Glory of the Garden glorifieth every one.

Then seek your job with thankfulness and work till further orders,
If it’s only netting strawberries or killing slugs on borders;
And when your back stops aching and your hands begin to harden,
You will find yourself a partner In the Glory of the Garden.
Oh, Adam was a gardener, and God who made him sees
That half a proper gardener’s work is done upon his knees,
So when your work is finished, you can wash your hands and pray
For the Glory of the Garden that it may not pass away!

And the Glory of the Garden it shall never pass away !

So Laurel Cottage is truly loved. But, the garden is the icing on the cake. Much of it as Diddley wanted it created. It is full of weeds. Ground elder the nemesis. And yet, a country garden can get away with that when you see the glory of spring and early Summer… 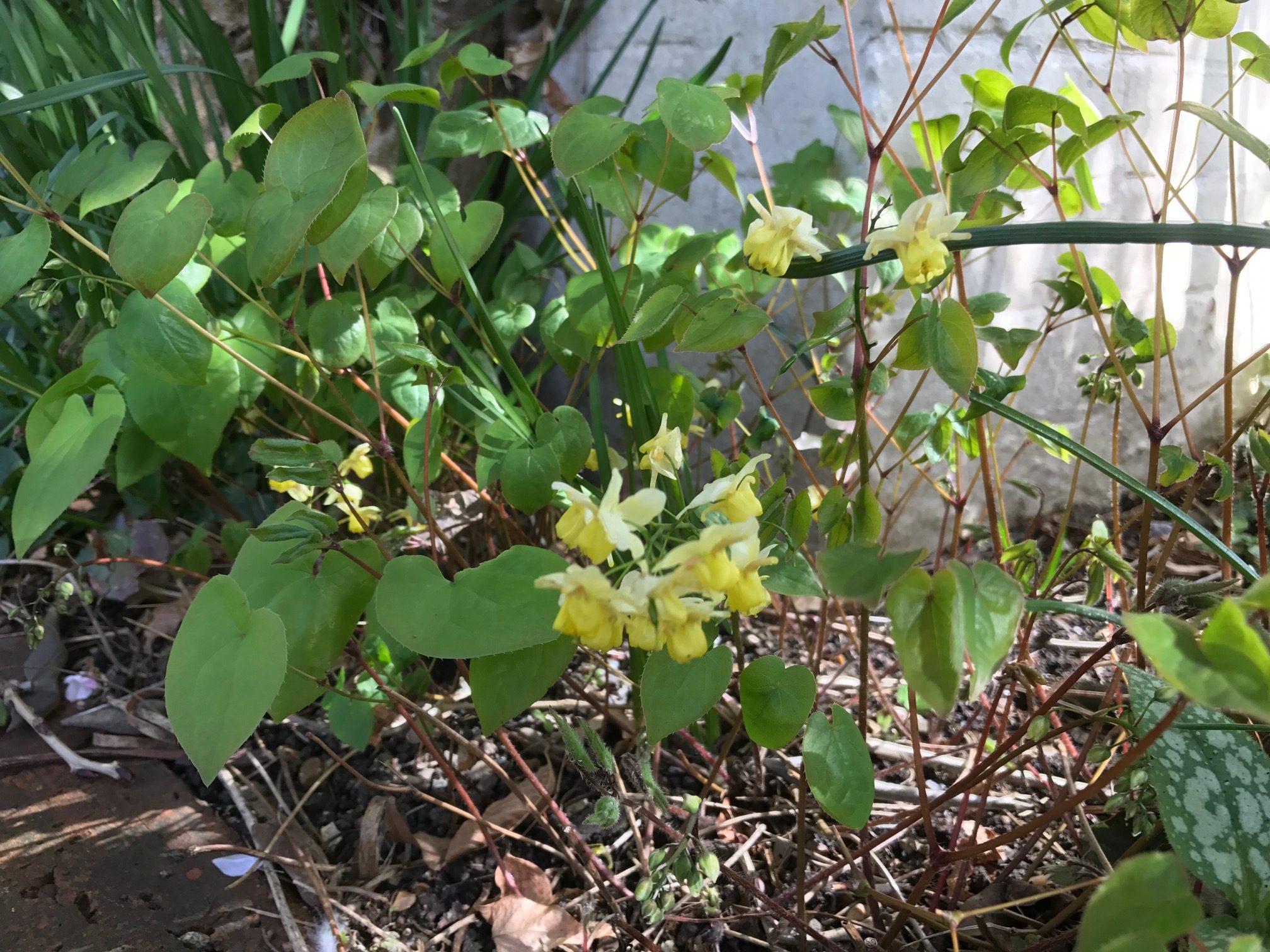 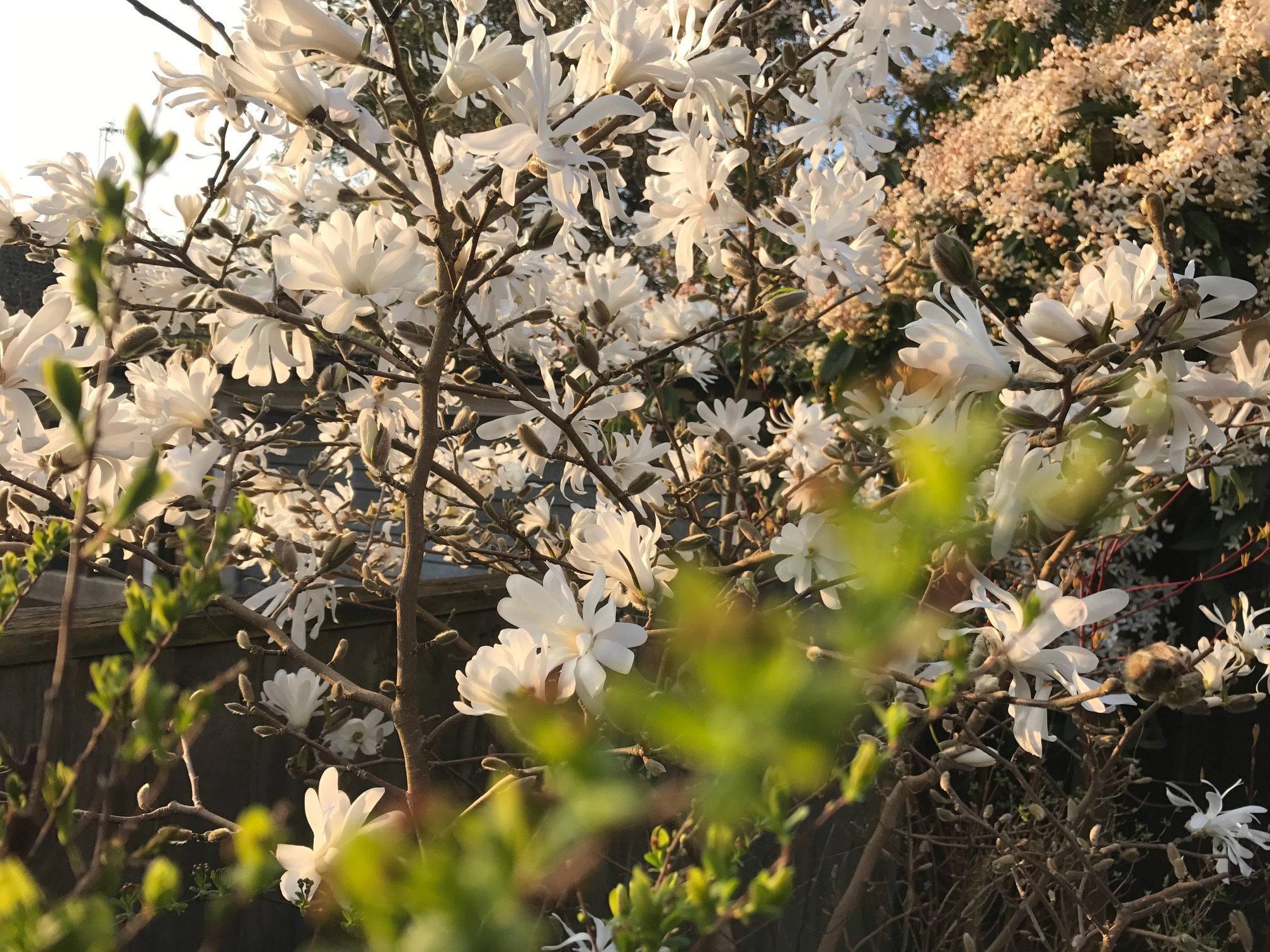 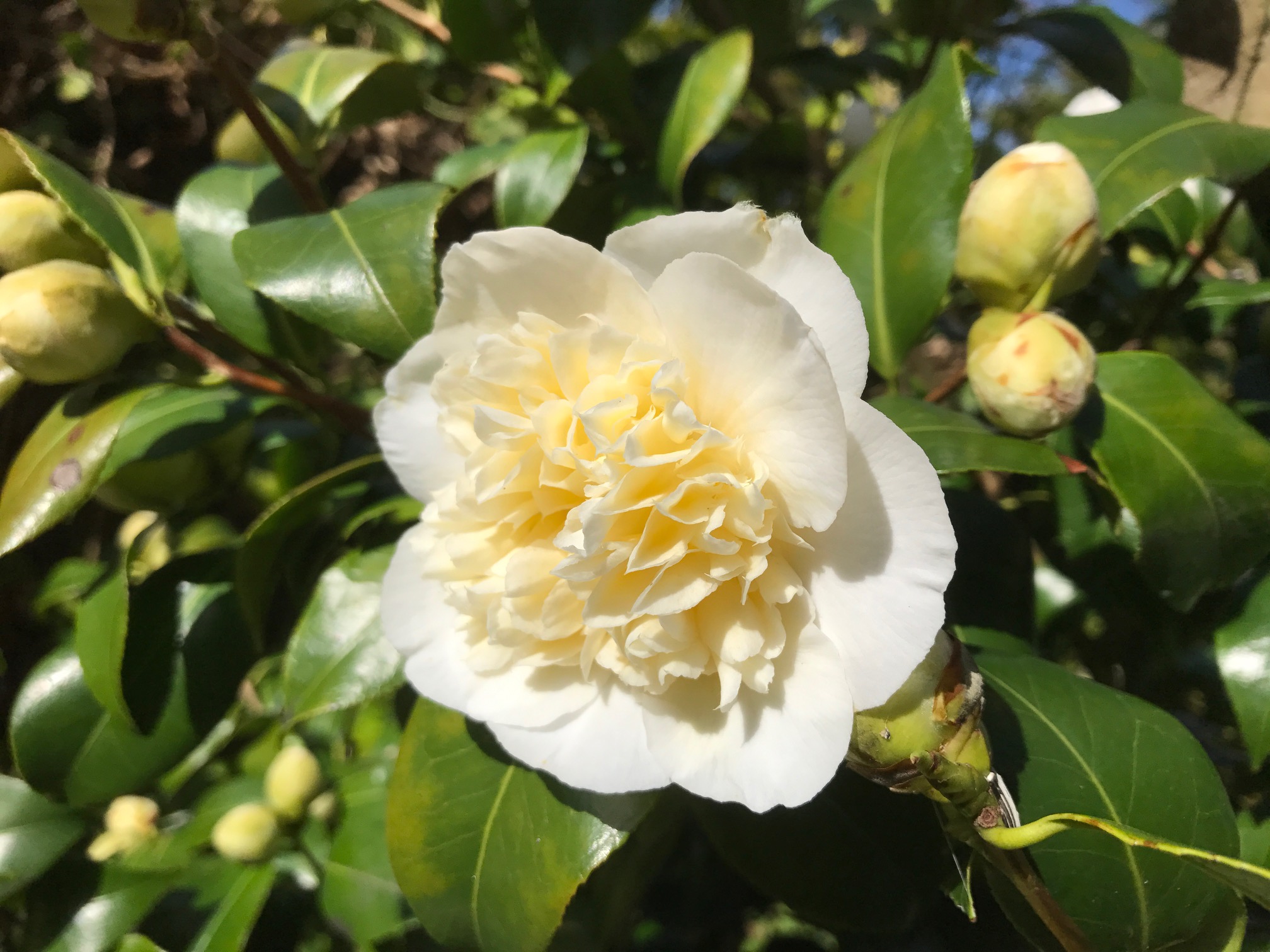 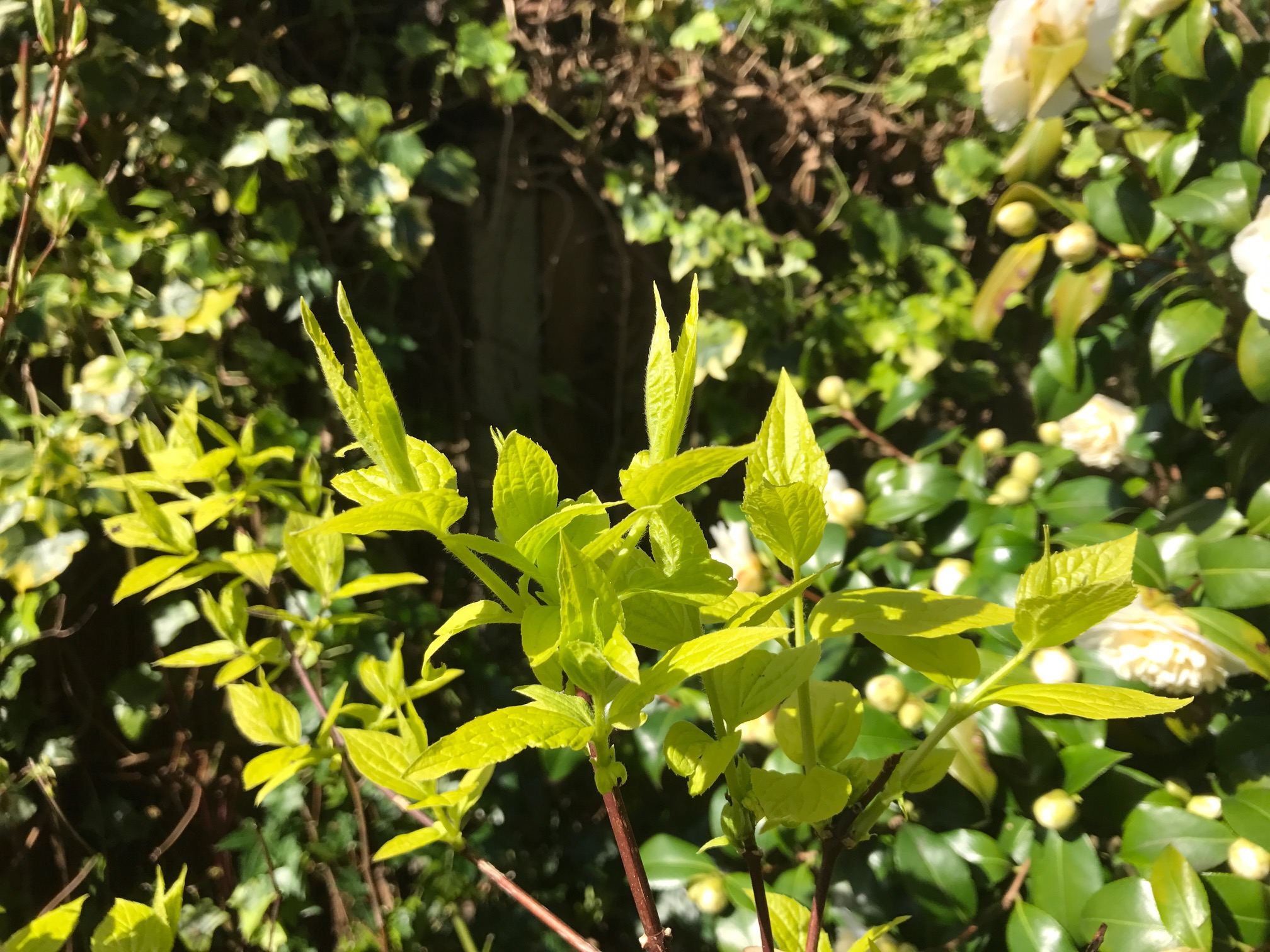 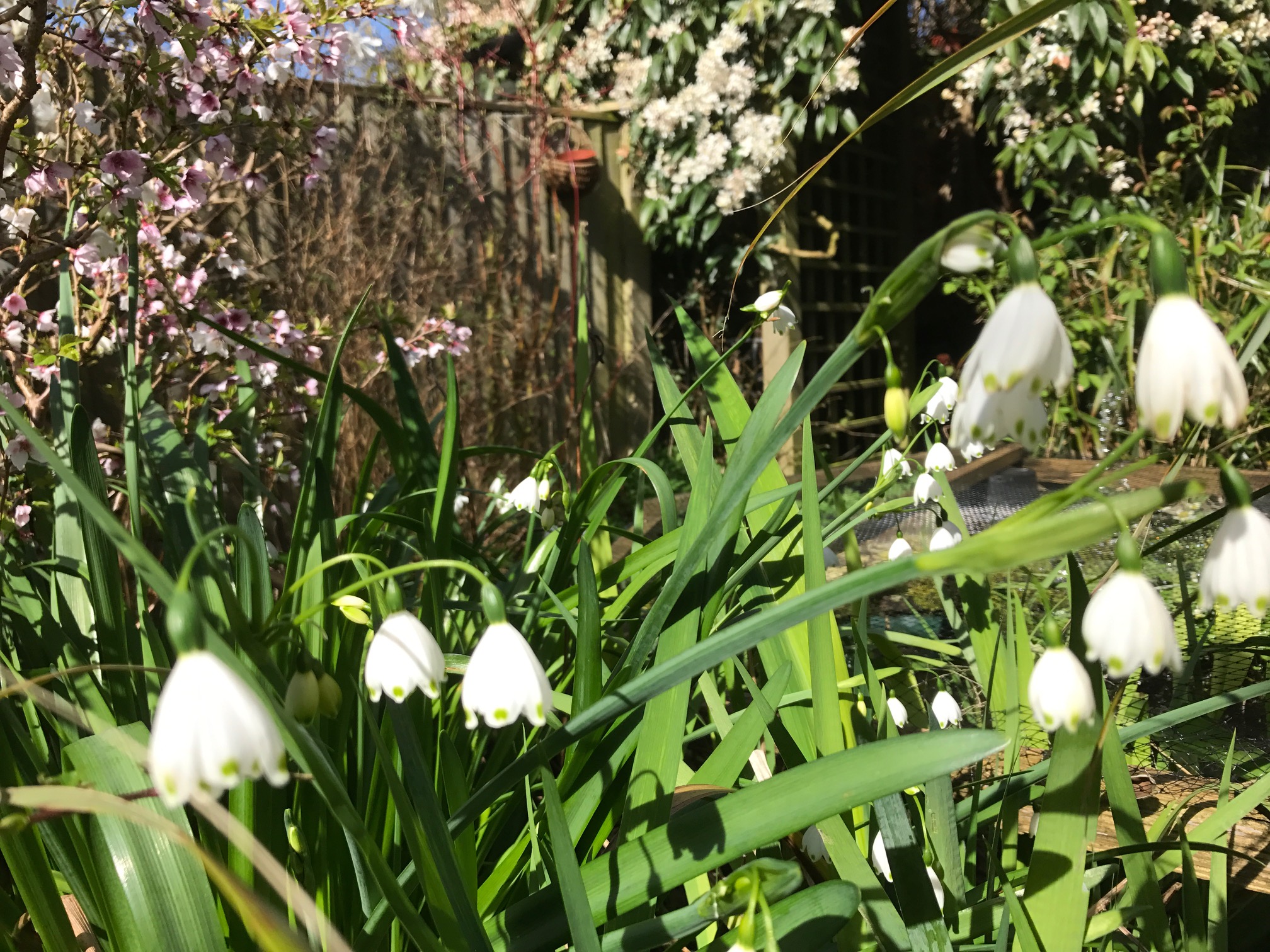 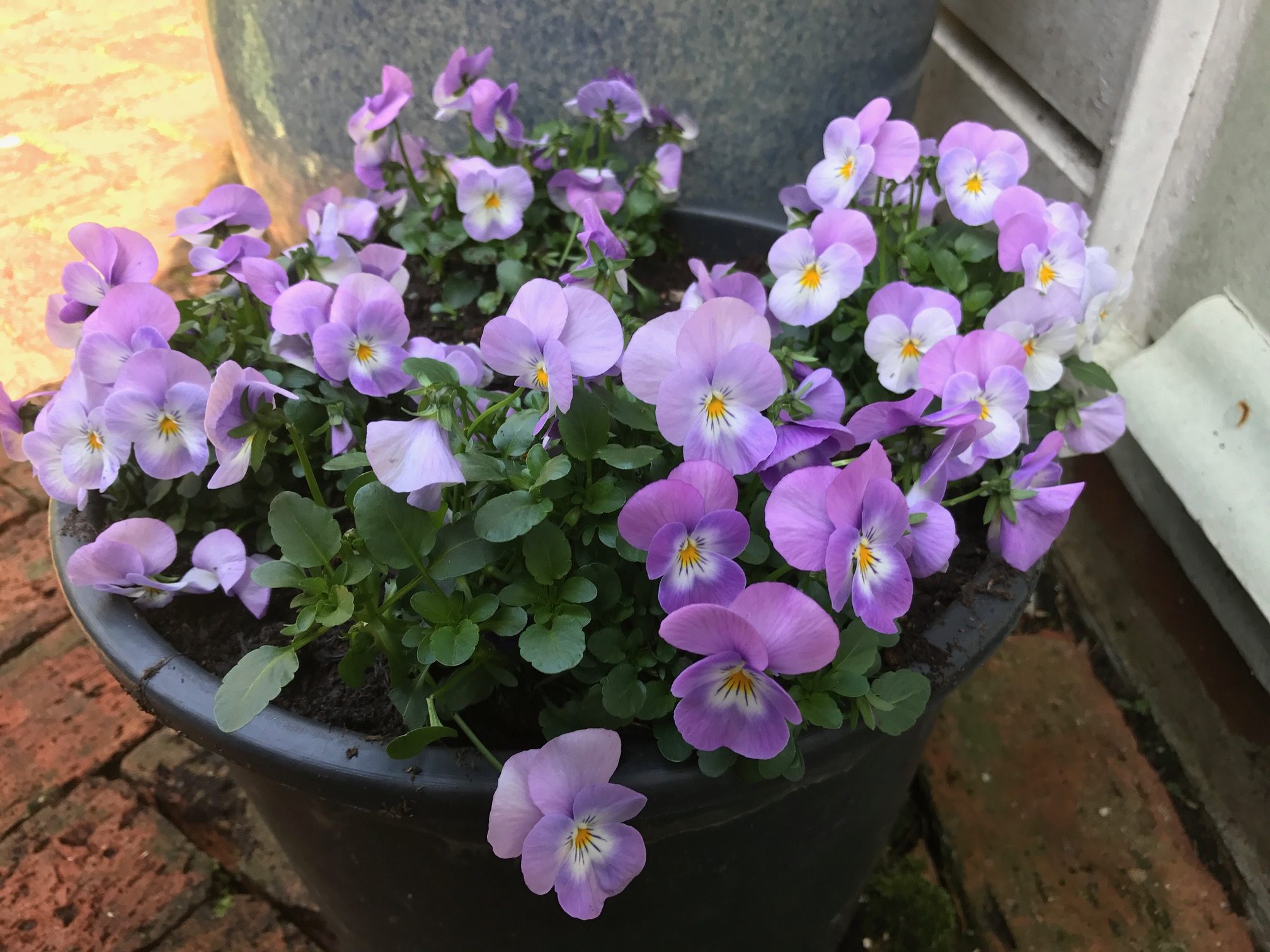 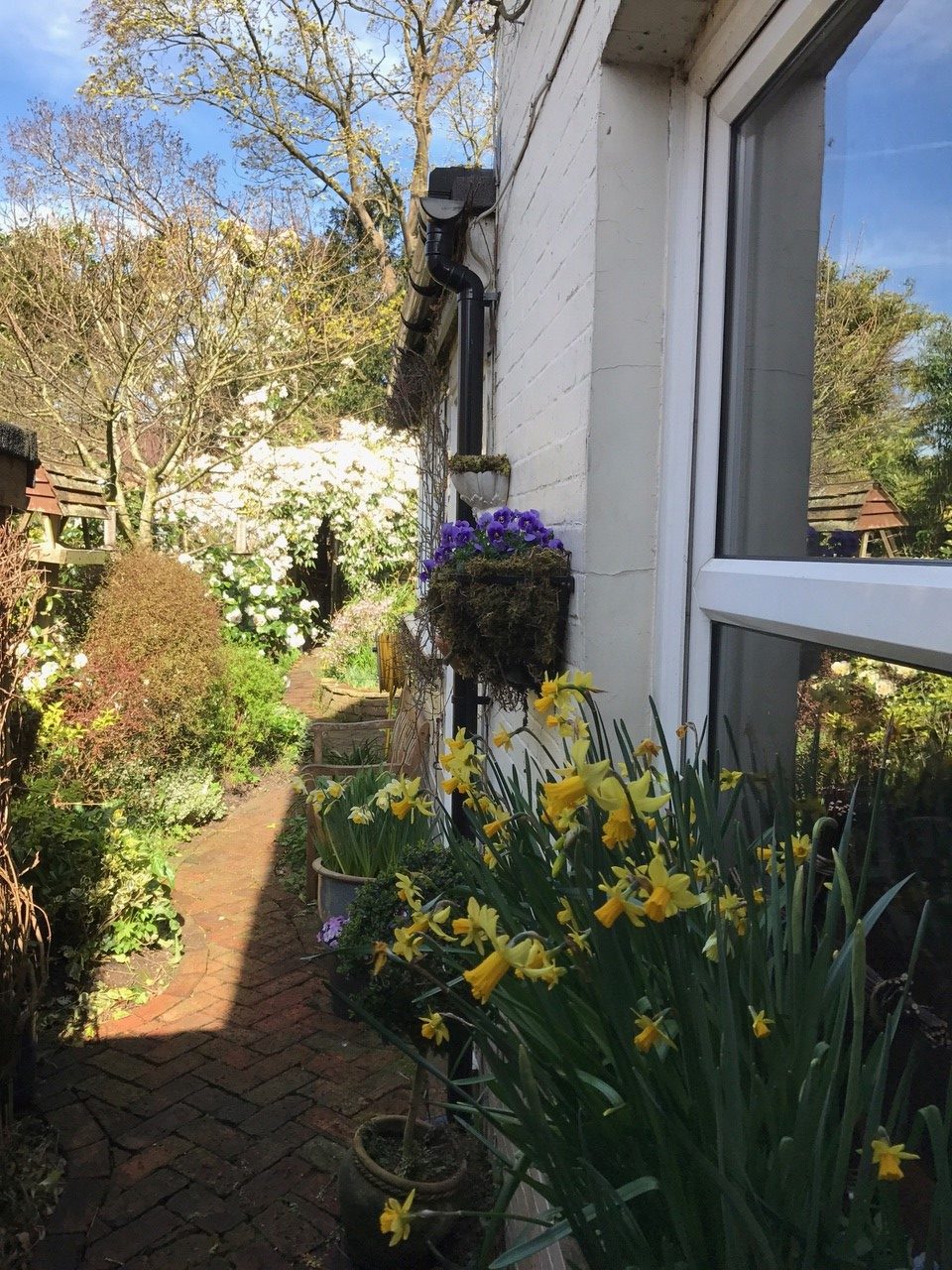 Back garden leading to the Queen of plants in April and early May … Clematis Armandii. 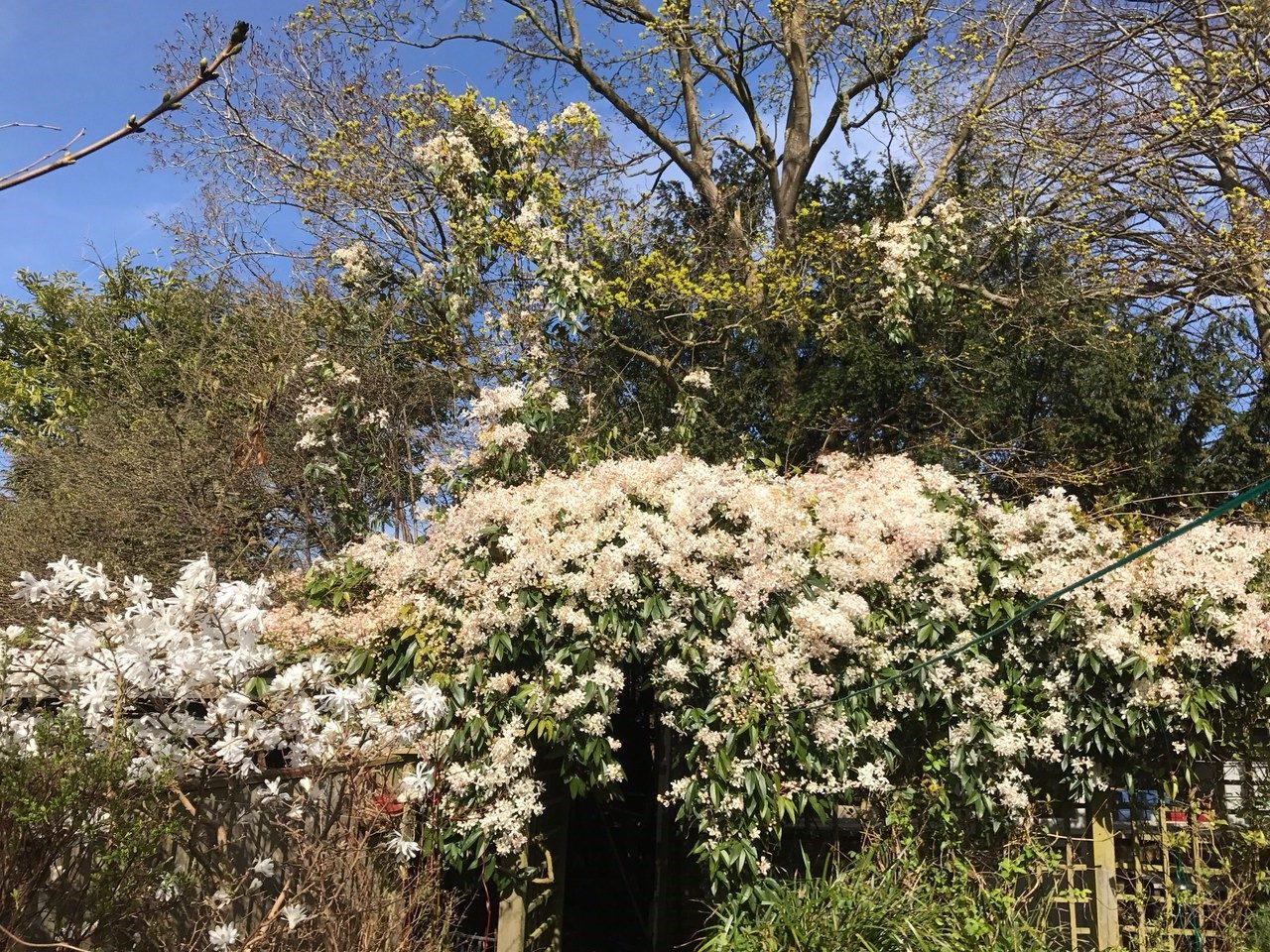 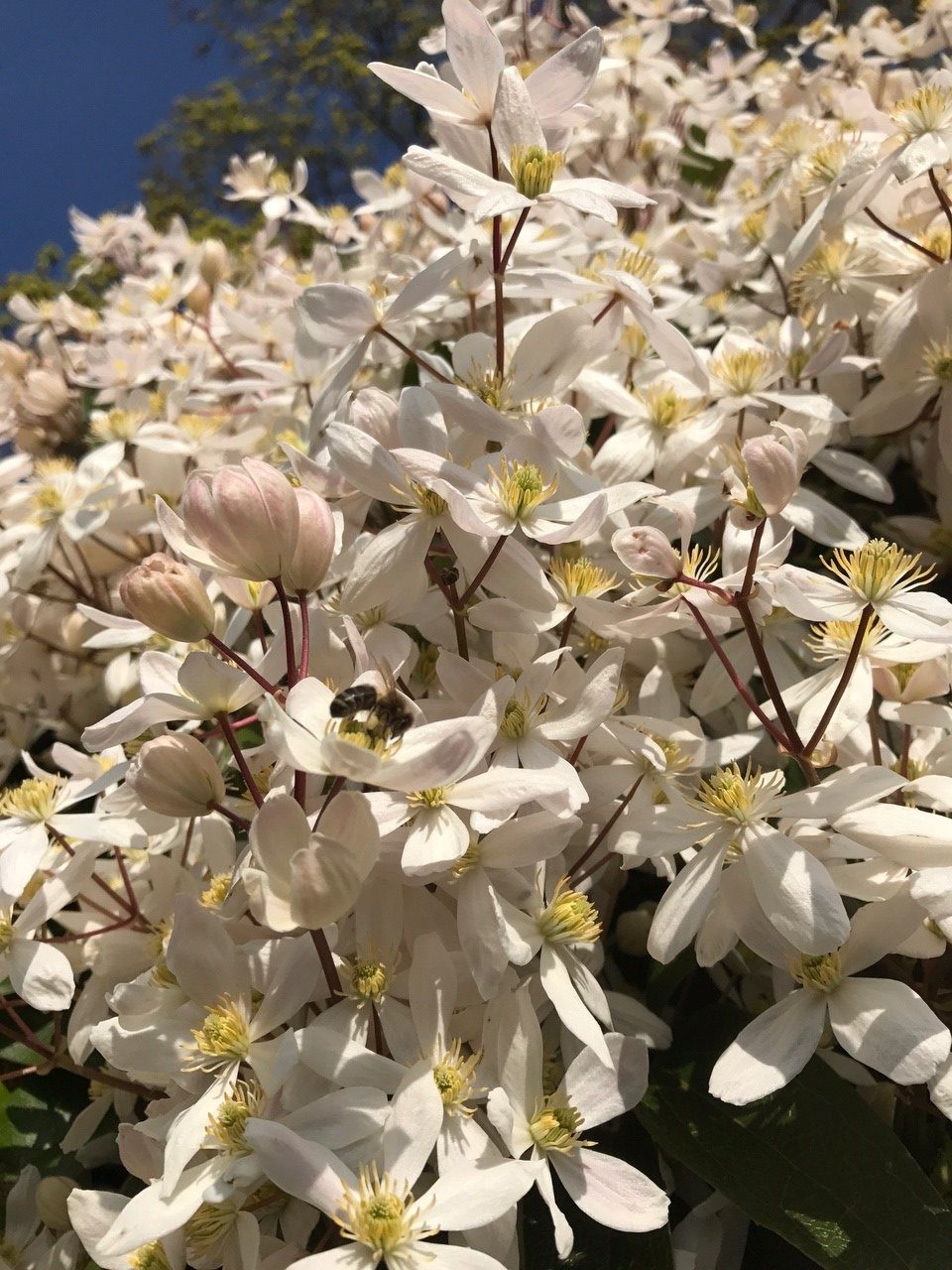 Armandii. Evergreen, vigorous (see it flowering up the sycamore tree). No pruning if you have the room. And a heavenly scent that invades the house on warm evenings. Magnificent. Diddley’s favourite. 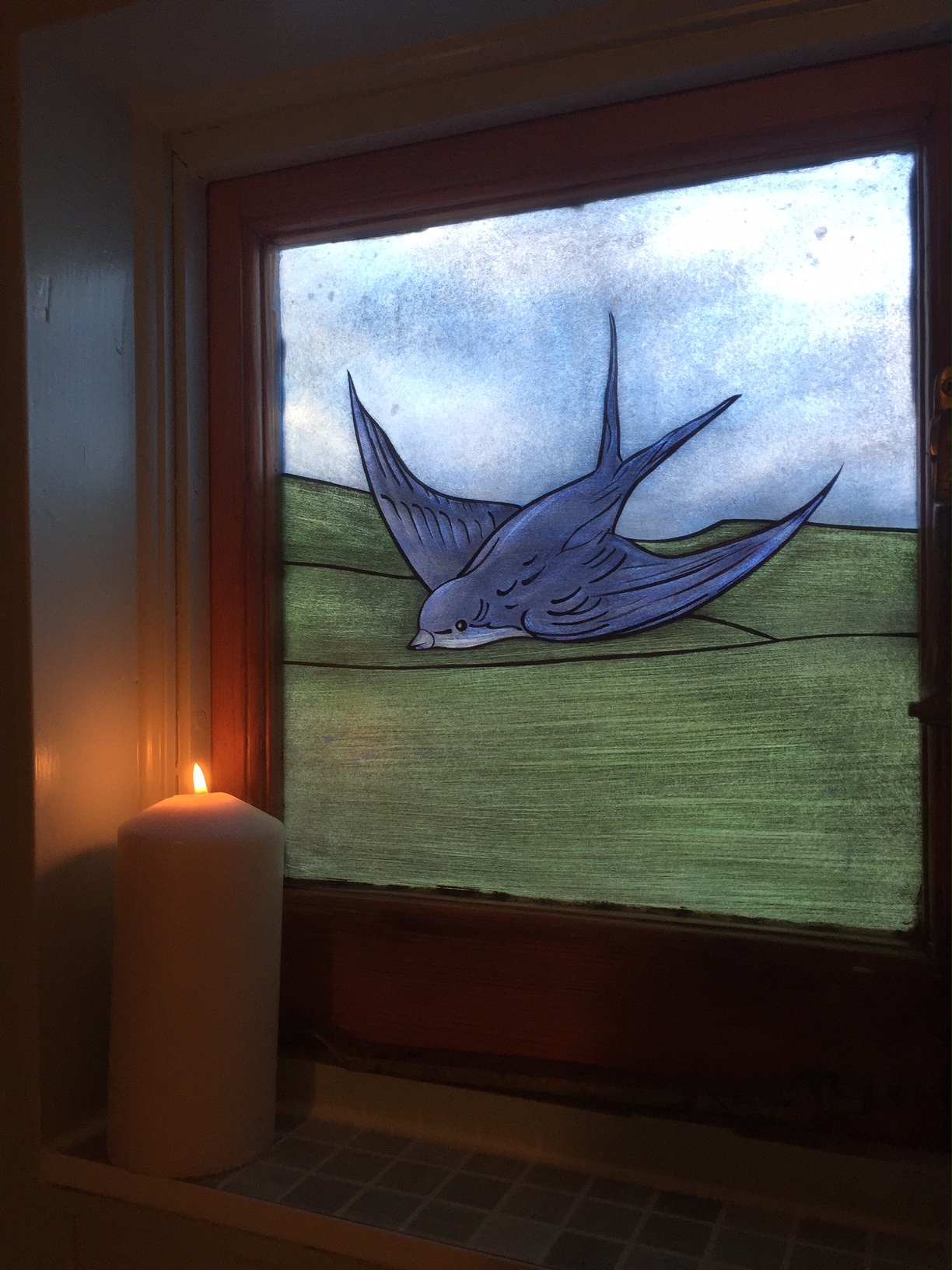 A Candle for Diddley. 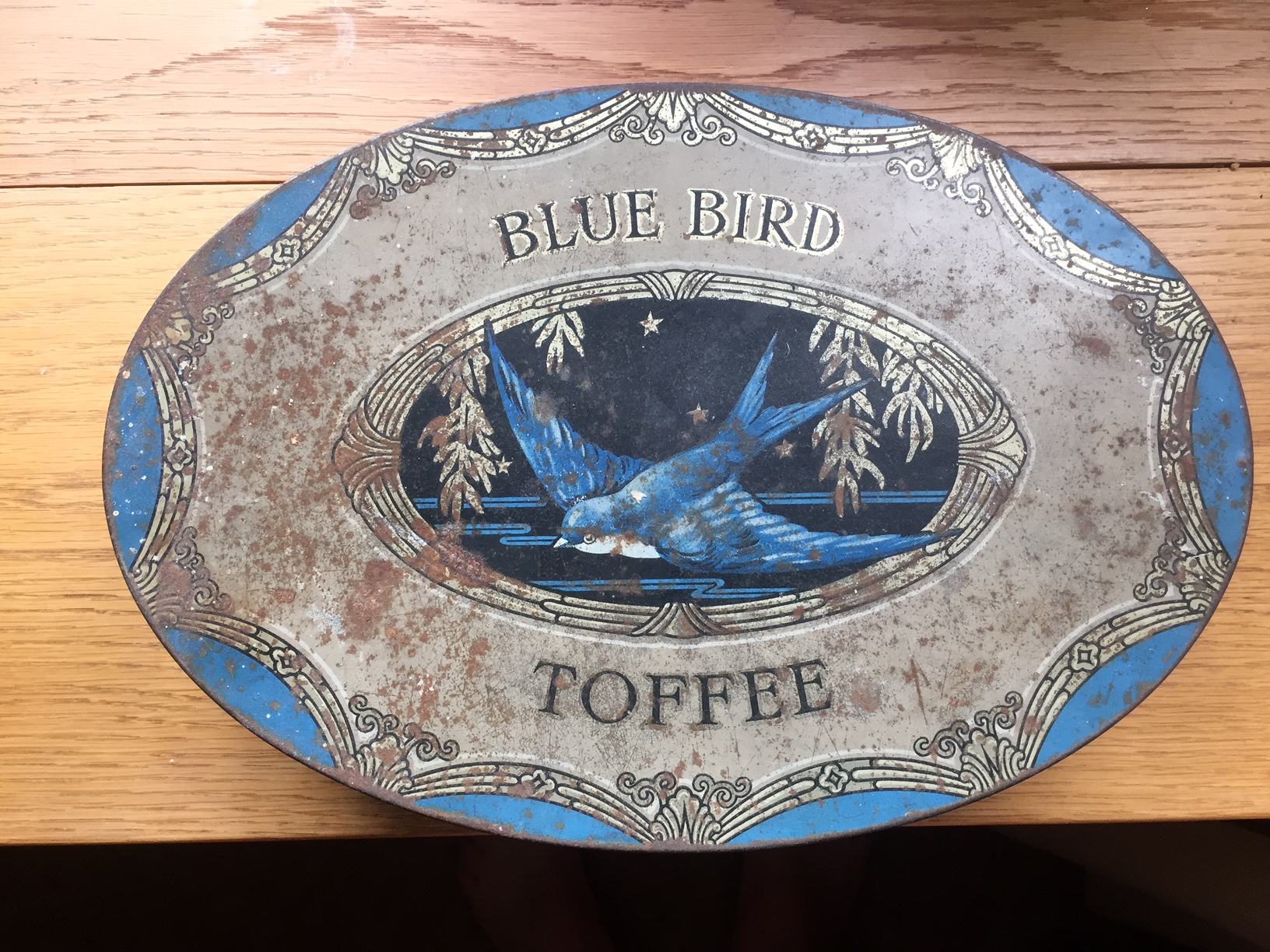 Sitting on the toilet in Laurel Cottage above Vitae Cottage this is the view… forwards… The bluebird window. Designed by Bobby. Fired by a stain glass artist, Symbolising freedom above the Downs. Now, now Bobby! “Designed” is stretching it a bit, since you pinched the bluebird from Bluebird Toffees and added a bit of grass.

Bobby… “To be honest, I gave the artist the tin and the concept of blue skies, rolling downs and the mythical bluebird. He designed it in Arundel. The window was Diddley’s birthday present in 2004.