August is a month of anniversaries. Some happy. Some sad. All unforgettable. We have named our first anniversary “Puffin“. 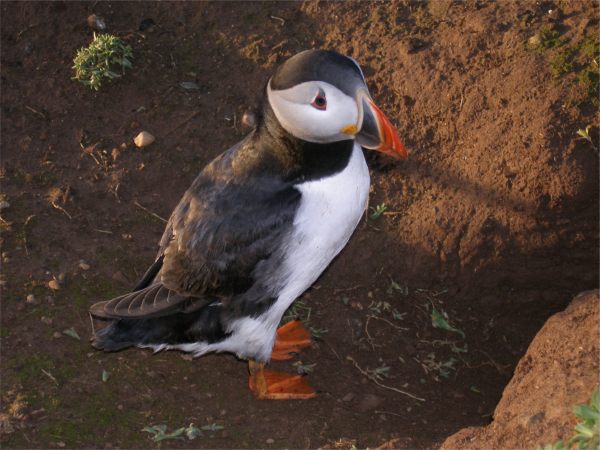 For over thirty years, Bobby has visited and stayed on the Pembrokeshire islands of Skomer and Skokholm. Most recently, exactly a year ago today, staying on Skokholm for a week. Writing many stories for Mindfully Bertie in the process. Sometimes featuring Richard and Giselle, the wardens. Richard writes a daily blog and it was one he wrote for 17 July that provided the inspiration for this story. 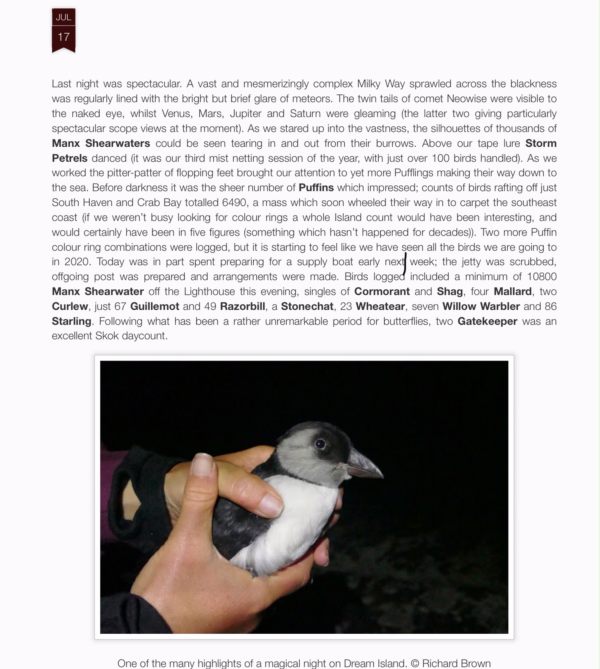 Last year, Bobby took Eamonn with him, leaving me to stay with Rosemary in Solva. He can take up the story.

Bobby: “2019 was a wonderful week on Dream Island. The climax was the night of the Storm Petrels, which we related vividly in our blog.

The story has similarities to Richard’s blog of 17 July. Without the Puffins.

Puffins are communal birds who spend their lives on the oceans, only coming to land to breed and then only safe remote places free of land predators. So imagine you are an adult Puffin called Percy. You will be spending the winter way out on the ocean with all your friends. Last year’s wife will be with the flock – perhaps twenty thousand birds all together sitting out the storms. Diving down for lunch. One day you will all decide that spring is coming and you need to get back to your ancestral home. In our story Skomer and Skokholm islands. You move en masse towards the Welsh Coast. Richard and Giselle will already be on Skokholm watching out for the first sighting of you and your friends. A few early birds will arrive, but then one early spring morning Richard and Giselle will leave their lighthouse home and head down to Crab Bay. 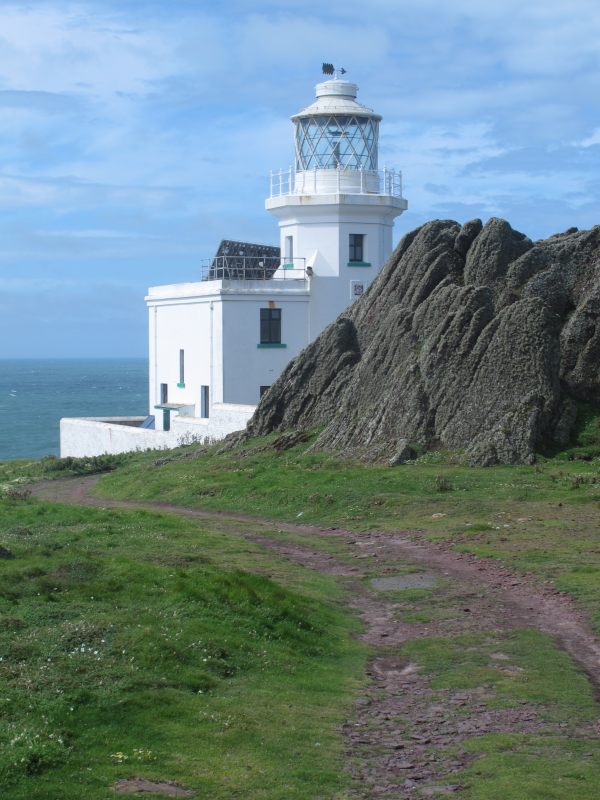 Skokholm Island lighthouse. Home to Richard and Giselle from March to November.

And there in front of them will be the whole flock. Or rather the colony, a Puffinry, a circus, a burrow, a gathering or an improbability. Don’t tell me. I just gather facts. Maybe ten thousand Puffins sitting on the sea. The next day they may have gone, but soon they will fly back and start landing. Percy will find his lifetime wife. For a while they will spend time socialising, both on the island and down close in on the sea. But then it’s down to business. It might be last year’s nest. Stealing another Puffin’s. Chucking out a rabbit, or simply digging a new one with his strong webbed claws.

There will be a lot of kissing (bill tapping) but soon – just with all the other Puffins, mating will start at more or less the same time. Incubation, hatching, feeding the one little Puffling all in unison. For weeks the colony will be a frenzy of activity. Pufflings soon grow, with a constant supply of fish from both parents until one night the adults just leave. All of them. The Pufflings are suddenly on their own. Hunger and instinct drive them to leave their burrows in their thousands in the dark and head for the sea. Jump off a cliff and flutter down to the sea. They cannot fly yet. Out they swim to get away from the island and by dawn they could be some way out.

Richard and Giselle will leave their lighthouse one morning, as they did on 17 July, head for Crab bay and they will have all gone. All bar one or two late breeders still feeding youngsters. The Pufflings will need to learn a lot about survival. They will not be taught, but learn to fly and feed underwater on their own. For three or more years they will stay on the ocean until they too, now young adults, fly back to the island of their birth. Find a mate and start all over again. A life that may last twenty years if they are lucky. 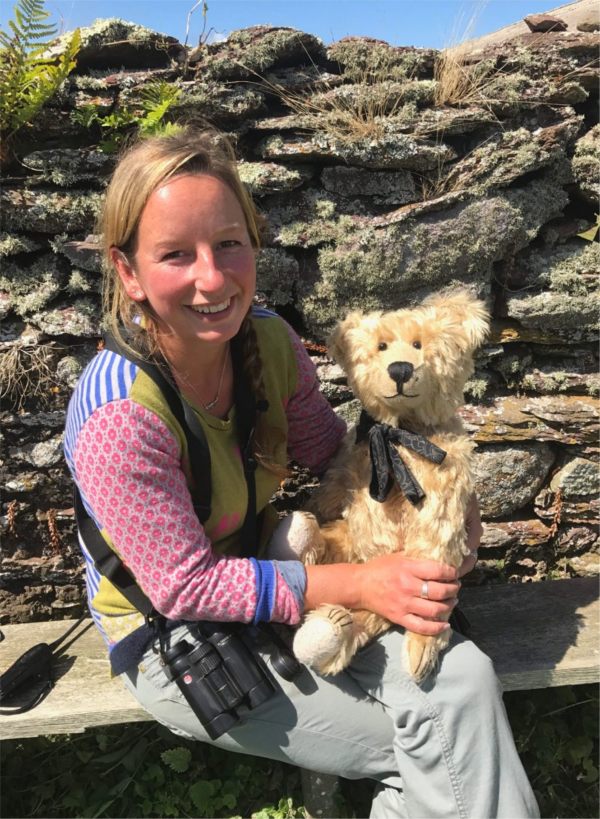 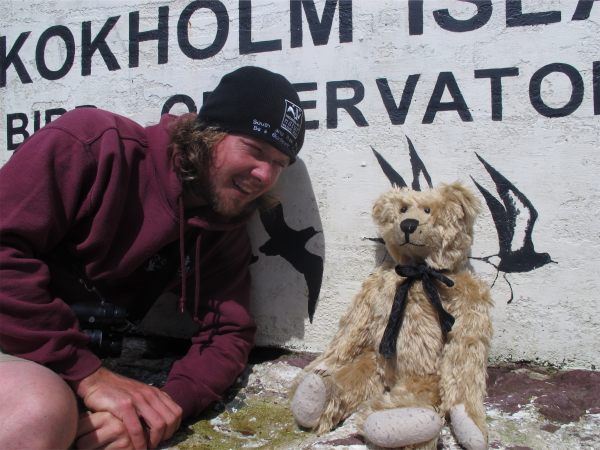 It’s just happened. Not just the Puffins, but their Auk cousins Guillemots and Razorbills will also have gone. They nest on cliff ledges, so their lifestyle is less visible and a bit more spread out. One evening on Skomer Island I approached High Cliff to find the other volunteers all watching the cliff through their telescopes. A young Guillemot was pacing up and down the ledge. Trying to summon up courage to jump maybe fifty foot into the sea down below where ‘his parents’ were calling him. On and on it went, for maybe half and hour, until suddenly the youngster jumped. Fluttering down and disappearing into the depths. Up he popped. His parents were delirious, swimming round and round him ducking and diving until they calmed down and heading out to sea swimming along together. We volunteers cheered at one tiny drama that took place in front of us, surrounded by thousands of other birds.

So the Auks have now gone back to sea. It’s time now for the biggest drama of all, when hundreds of thousands of Manx Shearwaters decide in a few weeks’ time to leave for South America. The tiny Storm Petrels too going to the open ocean.

Richard and Giselle have been wardens on Skokholm Island for seven years now. Returning in March each year they welcome spring work parties, who volunteer to maintain the buildings. Followed by a succession of bird lovers, bird ringers, photographers and people who love the natural world. This year they, and their Skomer counterparts Nat and Sylwia, arrived in early March. Lockdown came soon after and they have lived alone on their respective islands ever since. Together with Assistant Warden Ceris, Visitor Control Officer Catrin and long term volunteer Rhian on Skomer. All staying probably to November. The National Lottery coming up trumps to fund them looking after these treasured places when all income from visitors has disappeared.

Richard tells me they are very happy out there in their isolation. At this point, we would love you to read this blog from 2017 describing life on the island and how in 2020 it has reached a completely new way of life. Still just as rewarding. An opportunity arisen from tragedy and the pandemic. In particular the interviews for morning television a few years ago.

Those of us who have been privileged to share the Island life on these two glorious islands cannot wait to go back one day. For now, both are closed to overnight visitors for the rest of 2020. It is undecided as yet if day visitors will be allowed back on Skomer this year. The visitors to the islands take millions of pictures of the birds and the landscape. A large proportion are of Puffins. I have seen giant telephotos on Skomer when a cheap phone can get close and personal to the Puffins. One day, a lady photographer with a £20,000 telephoto lens spent a whole afternoon taking hundreds, maybe thousands of pictures of Puffins. She missed the one of the Puffin sitting on her camera bag. So here is a slide show of our wonderful feathered friends. Keep your eyes open for the one on the camera bag. All bar one taken on Skomer Island.” 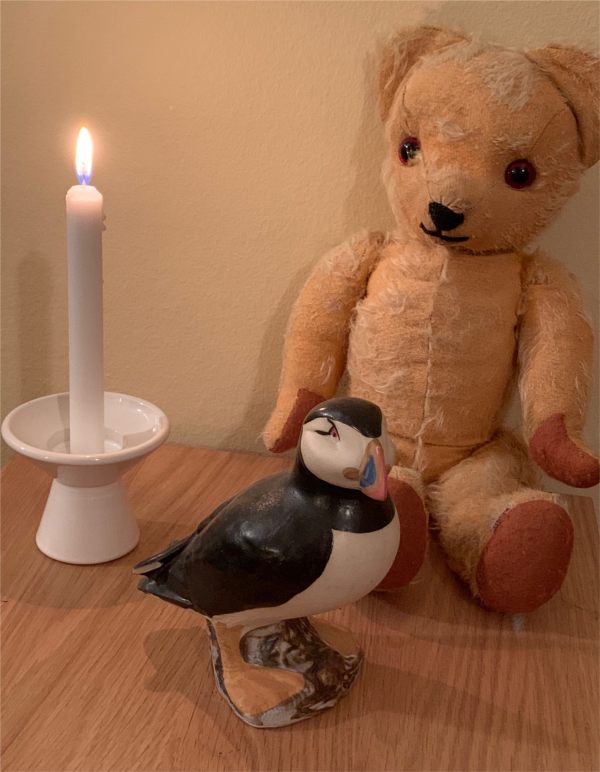 Diddley really didn’t like this china Puffin. Maybe because it came from Bobby’s old life and holidays on the Isles of Scilly. So it was relegated to the loft. For Bobby it is special. Not for its quality. It was quite a cheap ornament. But for the manner in which he acquired it. Staying on the main island of St Mary’s, he came upon a really nice pottery. All on its own, near Hugh Town. His ex bought a china pig. That is still in the loft! But they went back to find the pottery open and no-one there. By the till was a large note. “Welcome to my pottery. I have to go to Truro to collect my son from college. If there is anything you fancy just buy it and put the money in the till.” They bought the Puffin and put the correct money in the till that already had some money in it. And never forgot the unique feeling that existed at that time on the Isles of Scilly. Old fashioned values of honesty and respect. 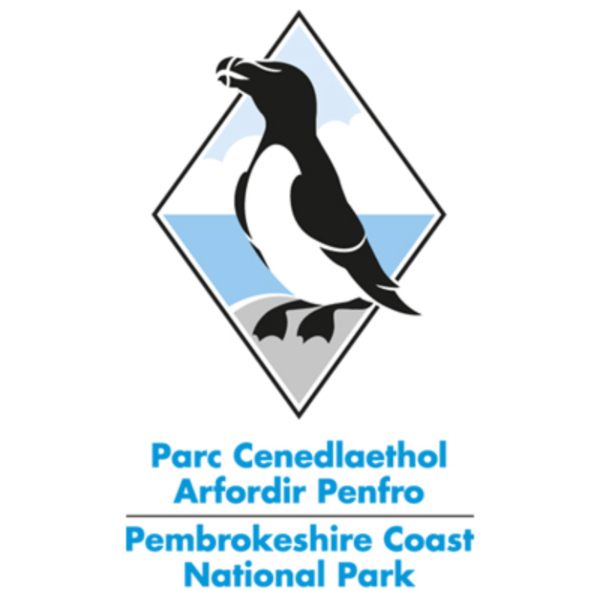 Some people wonder why the Razorbill is the symbol of the Pembrokeshire Coast National Park. Rumour has it that they really wanted the Puffin, but the Isles of Scilly got in first. Bobby will be honest and tell you that actually the Razorbill is his all time favourite Auk. Puffins are clowns. Razorbills are aristocrats.