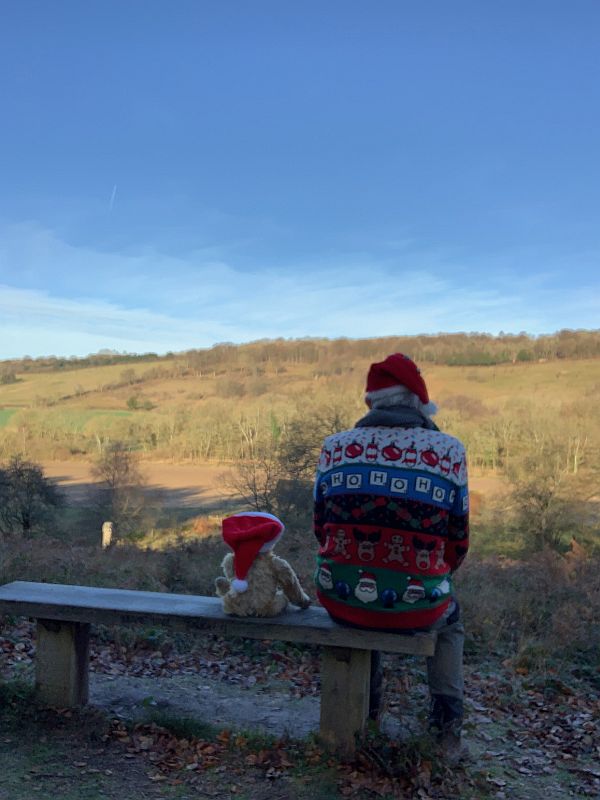 Bertie: “Bobby. This is my favourite place.”

Bobby: “It’s mine too, Bertie. Especially on Christmas Day morning.”

Bertie: “You are always very thoughtful on Christmas morning, Bobby. Thinking about your Dad who died on Christmas Day 1969. I know you always post a Facebook story in his memory and here it is” 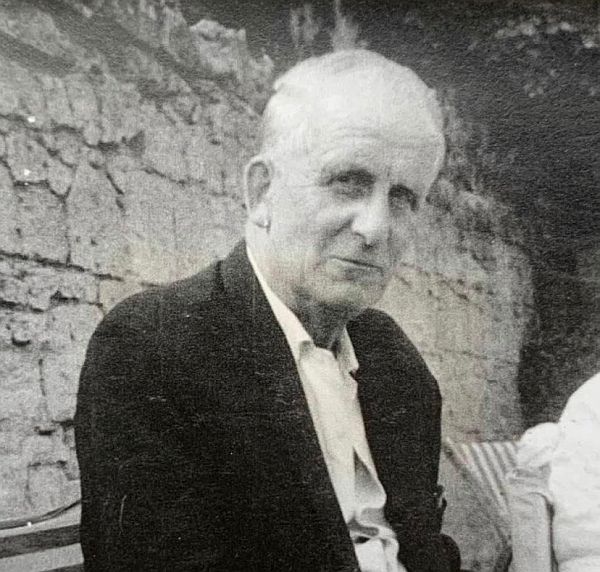 Early in the morning on Christmas Day 1969 there was a loud banging on my front door in Carshalton. At 25 years old I had never lived in a house that owned a telephone. It was my young brother in law Anthony telling me my father had died a couple of hours earlier.

I had never known grief before. With a two year old son it was a very difficult time.

Born in 1900 he had had a much harder life than I have since. Two world wars. Cycling a few miles to work in the blackout with the prospect of bombs or doodlebugs dropping around him. Or even on his home.

And now almost by accident he is immortalised in a teddy bear called Bertie with a Sarf London accent. In writing this I can still hear him shouting at Jack the dog. THAT BLEEDIN DOG. He was a socialist Alf Garnett. And would laugh when I say “If you are going to die make sure it’s a good day and people will never forget”. And each year, on Christmas Day, I remember my old Dad Sid (Sidney George Ball) and thank him for what he undoubtedly gave me in spirit.

But of course, many of our younger readers may well wonder who on earth was Alf Garnett. Back in the 1960s and 70s there was a comedy show on mainstream television that was immensely popular. It was called “Till Death us do Part”. 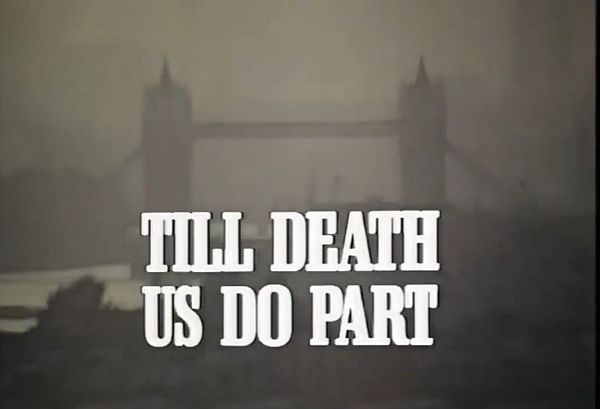 Nowadays it would be completely unacceptable. Bobby still watches it on YouTube. Laughing his head off, whilst recognising that he never assumed those dreadful bigoted views expressed by the star of the show. Alf Garnett. But his Dad Sid most definitely did. Those views were born of an age in post war Britain where intolerance accompanied the need for labour. Where ethnic minorities had assumed their rightful place in the country that was once their Imperial master.

More than anything, it is an enormous tribute to this country that we now enter yet another period of our history with another chance for yet another new future. A future unimaginable to Alf Garnett. The Guardian did a marvellous article on Europe prior to the referendum. It is compelling reading and includes the Alf Garnett vision of fifty years ago. It also includes a great episode of the show with some excellent football history at the end. Don’t miss it… Hahahahahah 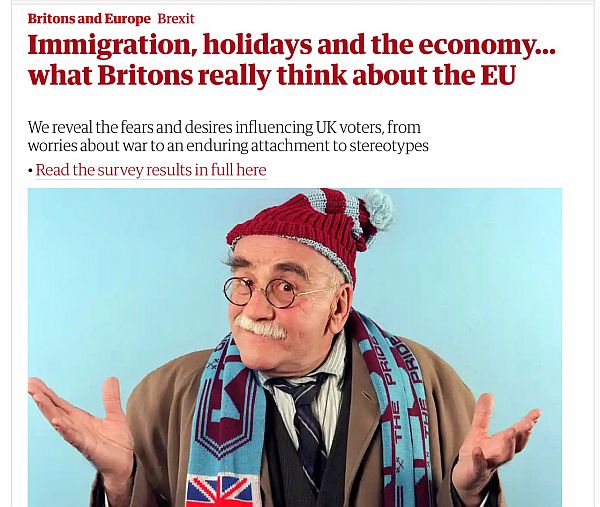 Alf Garnett: “Well I mean if we go into Europe…”

Alf Garnett: “I know that, yer silly moo. I’m not talking about that aspect am I? I’m talking about the Common Market aspect of going into Europe. Old Enoch’s against it, ain’t ‘e, eh? He don’t want no more bloody foreigners over here. We get enough bloody foreigners here as it is. Bloody country’s swarming with Eyeties, and Krauts, and Froggies and Spagnolleys and Brussell Sprouts. All coming over here and taking our jobs off us, aren’t they?”

Else Garnett: “Well, we can go over there and take the jobs off them.”

Else Garnett: “I wish you would.”

In Mindfully Bertie, we are conscious that we want to entertain and not get drawn into politics. This is only a tiny exception that ends further down with an acknowledgement. For I, Bertie Bear, am a reincarnation of Alf Garnett. Not in terms of what he said and believed in, but simply because Bobby created a character that he later realised was a parody of his dad.

Warren Mitchell was the actor who immortalised Alf Garnett. So successfully that he WAS Alf Garnett. Bobby found this tribute show the other night and hasn’t stopped laughing. Most tribute shows are for the stars. Not the fictitious characters they create. Filmed in 1997, it’s worth watching to see the celebrity invited audience. Including two England goalkeepers.

So Who is the real Alf Garnett? 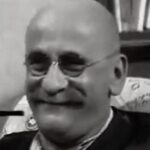 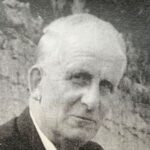 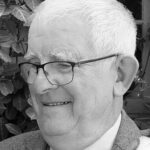 Looks? Nah. Just three old gits. (It’s worth noting that Bobby is by far the oldest of the three when the pictures were taken).

Sound? Warren Mitchell was an actor and did not sound like that in real life. Sid really did. Bobby only when it suits him, or his guard slips.

Bobby can never forget his Dad and his Alf Garnett like expressions.

That bleedin dog. (Jack)
Sill old moo. (Dorothy)
Up the Ammer’s. (West Ham United)
This is bloody England.
I’ll bleeding kill that girl (Bobby’s sister Wendy )
We ruled the bleedin world and want it back.
Bloody @£$%$£@!, and the bleedin £$%^£@ are stealing all our jobs.
This is My Bloody Country. Everywhere else is bleeding foreign.
Rule Britannia.
Gawd save the Queen (includes salute)

And as Bobby’s Dad would agree. If you are going to die, make sure it’s a good day.

Christmas Day is best and nobody will ever bleedin forget you. Ha ha ha ha. 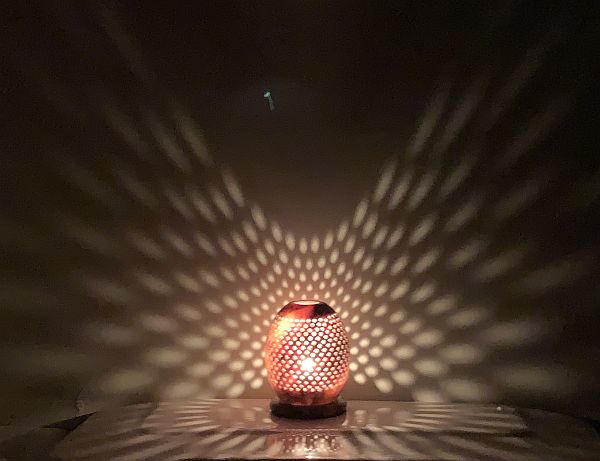