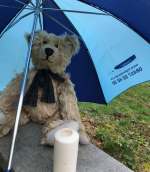 As you know, we love the RHS Gardens at Wisley. Our last visit was to photograph some of the autumn colours there. Although, to be honest, there was no real need, given the wonderful colours round here in the Surrey Hills as shown in our slide show.

There is always lots to see at Wisley and a bonus was the climax of the ornamental grass season, of which there are masses at the gardens. So, here is our tour of those ornamental grasses in all their glory – before the scythe comes to end another season.

I expect we all take grasses of all types for granted. So, carry on past the ornamental grasses for our take on other aspects of grasses, spread over two weeks.

Cider with Rosie
by Laurie Lee
(an extract)

Written in the village that Diddley grew up in. Words that you can smell, hear, and let your imagination drift off to a far off summer’s day when we were all young…

I was set down from the carrier’s cart at the age of three; and there with a sense of bewilderment and terror my life in the village began.

The June grass, amongst which I stood, was taller than I was, and I wept. I had never been so close to grass before. It towered above me and all around me, each blade tattooed with tiger-skins of sunlight. It was knife-edged, dark and a wicked green, ick as a forest and alive with grasshoppers that chirped and chattered and leapt through the air like monkeys.

I was lost and didn’t know where to move. A tropic heat oozed up from the ground, rank with sharp odours of roots and nettles. Snow-clouds of elder-blossom banked in the sky, showering upon me the fumes and flakes of their sweet and giddy suffocation. High overhead ran frenzied larks, screaming, as though the sky were tearing apart.

From this daylight nightmare I was awakened, as from many another, by the appearance of my sisters. They came scrambling and calling up the steep rough bank, and parting the long grass found me. Faces of rose, familiar, living; huge shining faces hung up like shields between me and the sky; faces with grins and white teeth (some broken) to be conjured up like genii with a howl, brushing off terror with their broad scoldings and affection. They leaned over me– one, two, three– their mouths smeared with red-currants and their hands dripping with juice.

‘There, there, it’s all right, don’t you wail any more. Come down ‘ome and we’ll stuff you with currants.’

And Marjorie, the eldest, lifted me into her long brown hair, and ran me jogging down the path and through the steep rose-filled garden, and set me down on the cottage doorstep, which was our home, though I couldn’t believe it.

That was the day we came to the village, in the summer of the last year of the First World War. To a cottage that stood in a half-acre of garden on a steep bank above a lake; a cottage with three floors and a cellar and a treasure in the walls, with a pump and apple trees, syringa and strawberries, rooks in the chimneys, frogs in the cellar, mushrooms on the ceiling, and all for three and sixpence a week.

I don’t know where I lived before then, My life began on the carrier’s cart which brought me up the long slow hills to the village, and dumped me in the high grass, and lost me. I had ridden wrapped up in a Union Jack to protect me from the sun, and when I rolled out of it, and stood piping loud among the buzzing jungle of that summer bank, then, I feel, was I born. And to all the rest of us, the whole family of eight, it was the beginning of a life.

If you have never read Cider with Rosie, you really need to. Bobby has three maybe four on the bookshelf you can borrow. Describing a world that was to disappear for ever with the modern age.

On the wet grass at Diddley’s view.

When you think of the dearly departed, you wonder sometimes what she would have made of what has happened since. I doubt that an inscribed wooden bench in a beauty spot named after her would have crossed her mind!
—————