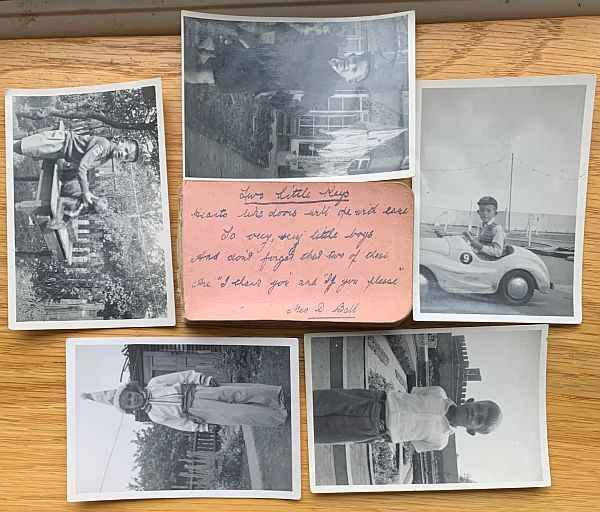 It’s clear looking back over so many years that facts become assumptions and can become pure fiction. Just like Chinese Whispers, I suppose. On the one hand we have the true facts, as verified by our Resident Genealogist Elizabeth. And then we fill in the gaps. Hopefully with inspired guesses, but never pure fiction. That little book clearly came to Bobby from his mother in 1953. When it only had two entries. Both poems. One by his mum Dorothy. Mrs D Ball. 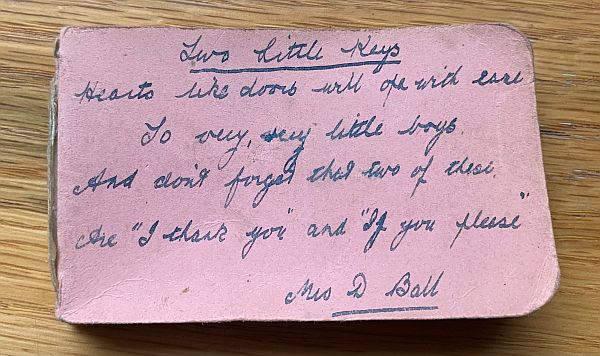 Hearts like doors will open with ease
To very, very little boys.
And don’t forget that two of these
Are ‘I thank you’ and ‘if you please’.

And one by “M Ball”, who he assumed to be his dad. 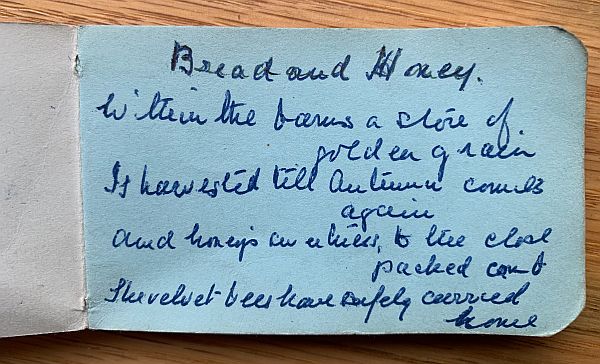 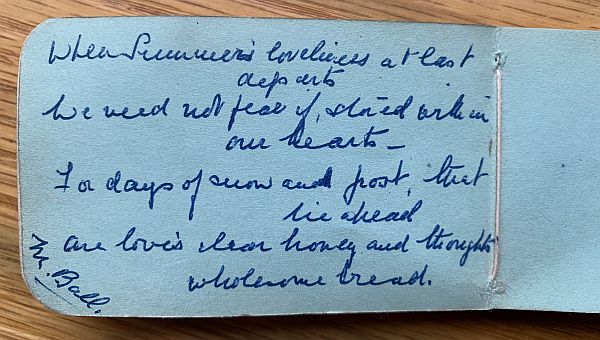 Within the barns a store of golden grain
Is harvested till autumn comes again.
And honey’s sweetness to the close packed comb
The velvet bees have safely carried home.

When Summer’s loveliness at last departs.
We need not fear if, stored within our hearts –
For days of snow and frost that lie ahead
Are love’s clear honey and thought’s
wholesome bread.

In his uncertainty, he sent “Bread and Honey” to Elizabeth. She revealed with certainty that it was in fact written by Miriam ( M Ball). She had checked the writing with some of her artefacts and it is definitely Miriam. Someone Bobby had never heard of. And now Elizabeth has clarified a part of Bobby’s family history.

Miriam met her future husband, George, in Suffolk. George and Miriam came from Thetford and Mildenhall. Miriam played the piano when she was very young. I found a newspaper article, which stated that she passed an exam in pianoforte held at Bury St Edmunds in 1887, and was a pupil at Mrs Burt’s school in Mildenhall. She would have been 10 years old at the time. Years later, she married George in 1898 in London, having left East Anglia for good. They had seven children, your Dad was the second child and eldest son. Your Mum knew the eldest daughter, as she was in her class at school. (Her name was Miriam Elizabeth, but she was known as Minnie). Your Gran was only 49 when she was widowed. Your parents lived with her when they were first married and my Dad joined them when he was born. That was when they lived in Lavenham Road in Wandsworth.

We also learned that both George and Miriam met dramatic ends. He run over and killed on his bicycle on Haydon’s Road railway bridge, Tooting in 1927. She, in old age, fell down the stairs and didn’t survive.

Bobby thinks the most likely explanation for the poems is that they were written when his parents lived with Miriam and George in the early years of their marriage. Possibly the late 1920s . Two Little Keys is a well known children’’s poem, although Dorothy had changed the words slightly. Maybe in recognition of her baby son. The generally accepted version is this:

Hearts, like doors, open with ease
To very, very little keys.
And don’t forget that two of these
Are ‘I thank you’ and ‘If you please’. 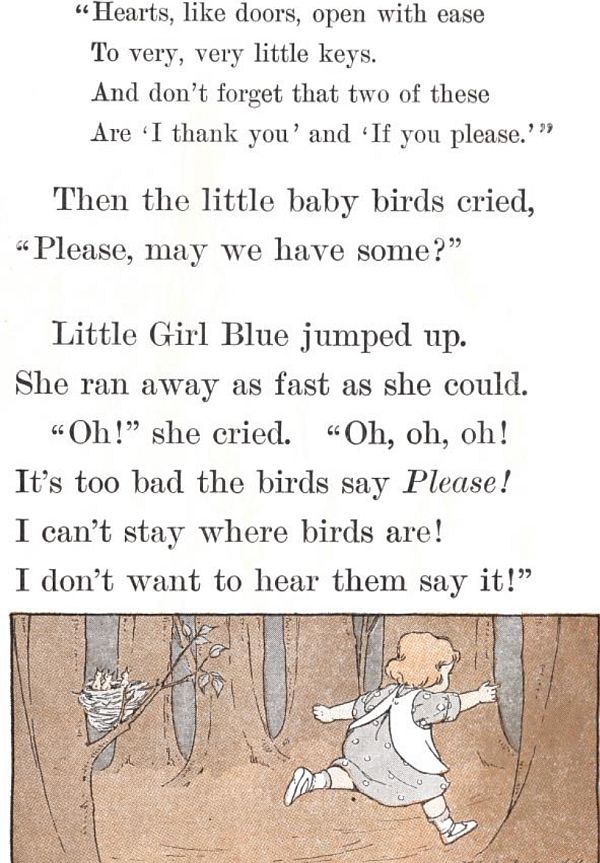 Little Pink Book has led to more discoveries, in particular these previously unseen pictures of Bobby and his family when he was young. Taken on an old box camera. The story of box cameras is for another time. Particularly as they were collected by Bobby’s son Andrew as a schoolboy and we now learn he still has some. But, for now, you can see that the prints are tiny. This is because the box camera was the cheap camera for the people. Just eight pictures on a film. The pictures were processed direct from the size of the film. Any enlargement would cost more.

There will be a blog on box cameras. 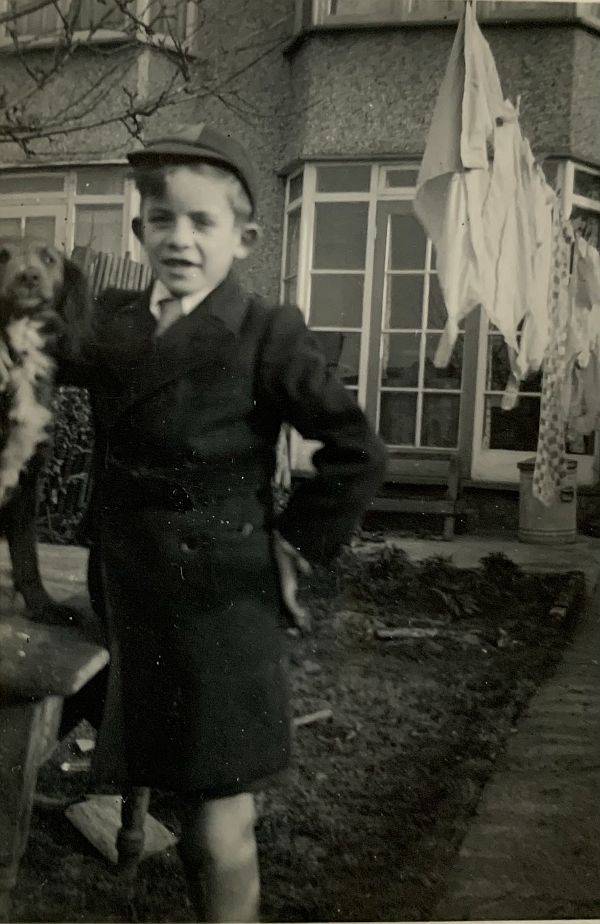 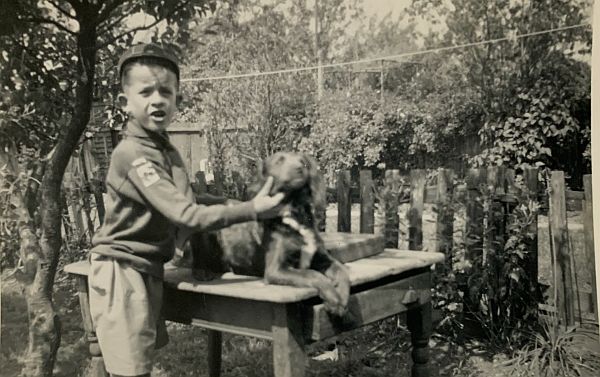 1952. Bobby in his wolf cub uniform. He still has that cap. 2nd North Cheam Cub Pack. And Bruce the dog. 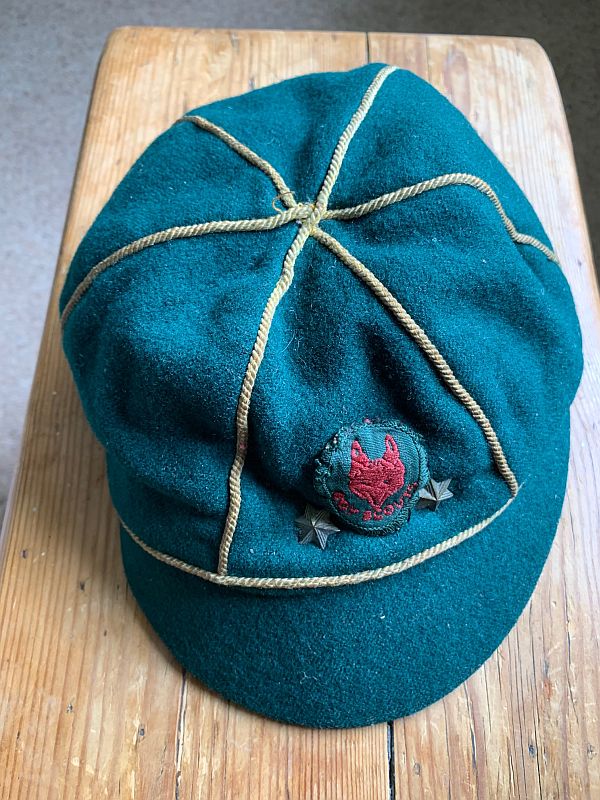 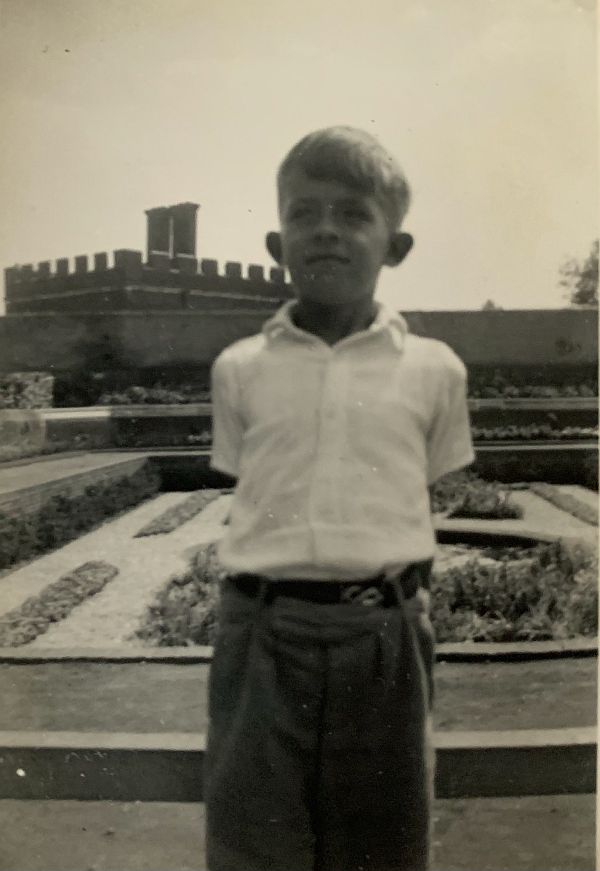 OK. OK… I know, it’s the ears! Dumbo. Dorothy told everyone it was because he was a war baby and spent his first few months underneath the table in the front room in a Morrison shelter. As the bombs rained down. Sutton and Cheam wasn’t a target, but a good place to dump your bombs if your Heinkel needed to turn round and do a runner. We have an interactive website showing where everyone of the 200 or so bombs landed in the district. A lot of people were killed. We will share it in 2021. 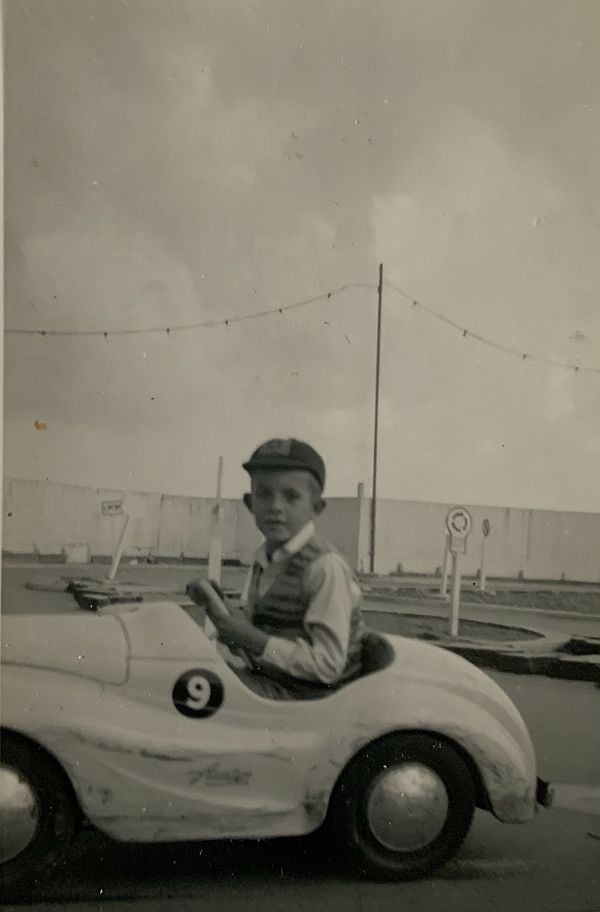 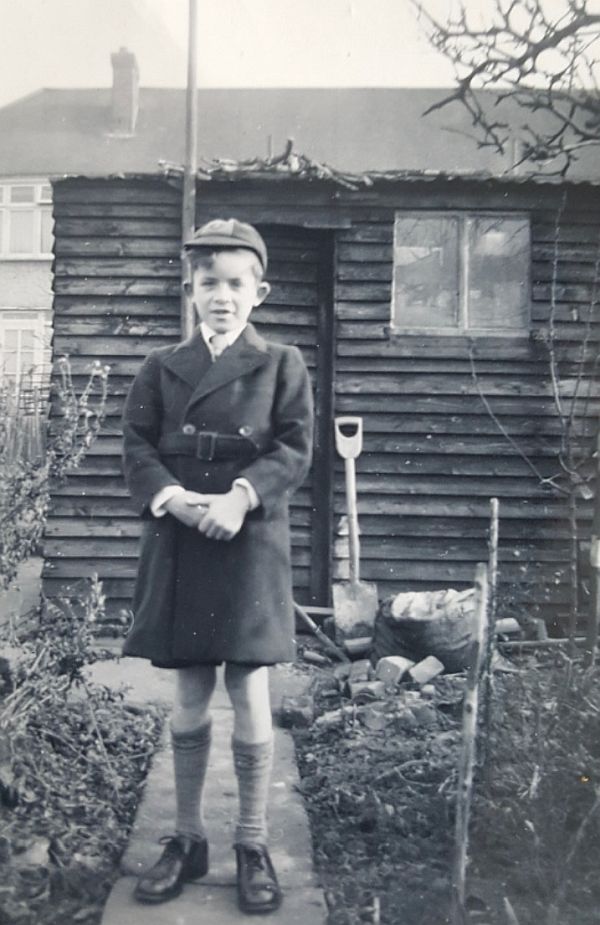 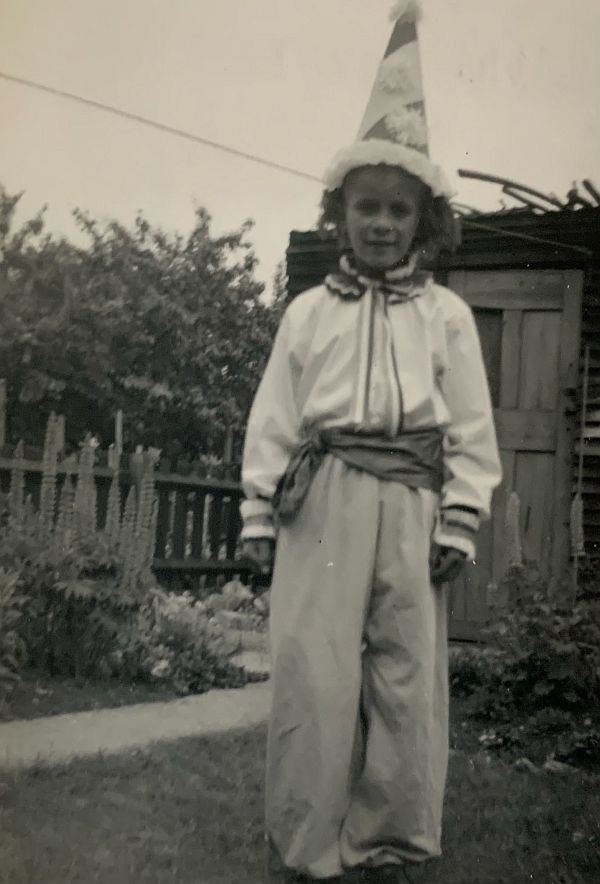 May 1953. The Coronation clown. Handmade by Dorothy, apart from the hat which came from Hamleys in Regent Street. Enhanced by ginger rug wool for the hair. 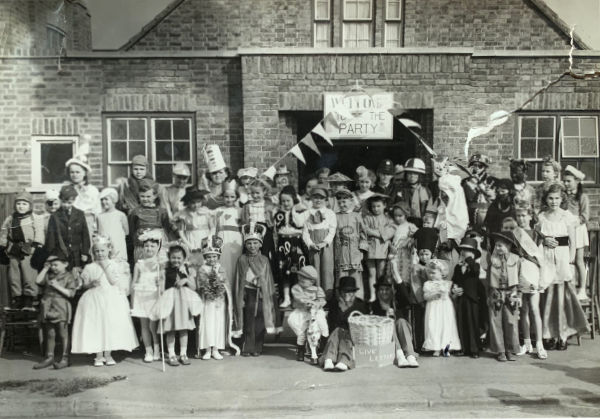 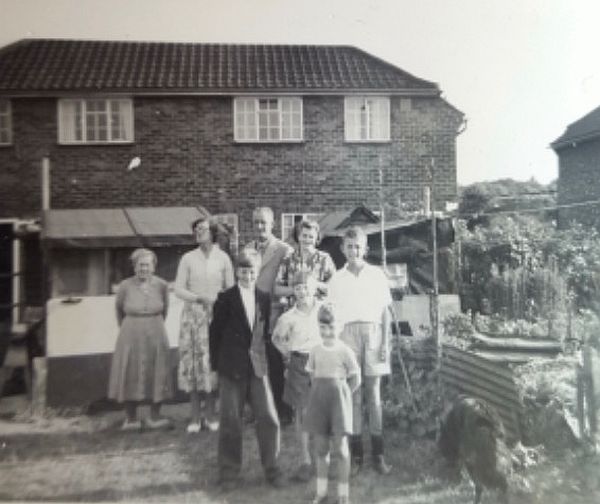 And finally, George from Thetford was born George Balls. It seems that the “s” dropped off in the early part of the 20th century. Much to Dorothy’s amusement, when she told Bobby in her old age. They were a family like so many that kept the family Christian names alive through the generations. Bobby was christened Robert after his great grandad Robert. A town crier in Suffolk.

The final story of the Little Pink Book trilogy will be in January. Entitled “What’s in a Name?”

As this story has revolved around poetry we are finishing with one of Bobby’s favourites.

The bells of waiting Advent ring,
The Tortoise stove is lit again
And lamp-oil light across the night
Has caught the streaks of winter rain
In many a stained-glass window sheen
From Crimson Lake to Hookers Green.The holly in the windy hedge
And round the Manor House the yew
Will soon be stripped to deck the ledge,
The altar, font and arch and pew,
So that the villagers can say
“The church looks nice” on Christmas Day.Provincial Public Houses blaze
And Corporation tramcars clang,
On lighted tenements I gaze
Where paper decorations hang,
And bunting in the red Town Hall
Says “Merry Christmas to you all.”And London shops on Christmas Eve
Are strung with silver bells and flowers
As hurrying clerks the City leave
To pigeon-haunted classic towers,
And marbled clouds go scudding by
The many-steepled London sky.And girls in slacks remember Dad,
And oafish louts remember Mum,
And sleepless children’s hearts are glad.
And Christmas-morning bells say “Come!'”
Even to shining ones who dwell
Safe in the Dorchester Hotel.And is it true? And is it true,
This most tremendous tale of all,
Seen in a stained-glass window’s hue,
A Baby in an ox’s stall?
The Maker of the stars and sea
Become a Child on earth for me ?

And is it true? For if it is,
No loving fingers tying strings
Around those tissued fripperies,
The sweet and silly Christmas things,
Bath salts and inexpensive scent
And hideous tie so kindly meant,

No love that in a family dwells,
No carolling in frosty air,
Nor all the steeple-shaking bells
Can with this single Truth compare –
That God was man in Palestine
And lives today in Bread and Wine.