We arrived at Martin’s Haven on Tuesday. A group grabbed Bobby’s heavy gear and carried it up the steps to the boat. We knew we were with friends for a week. 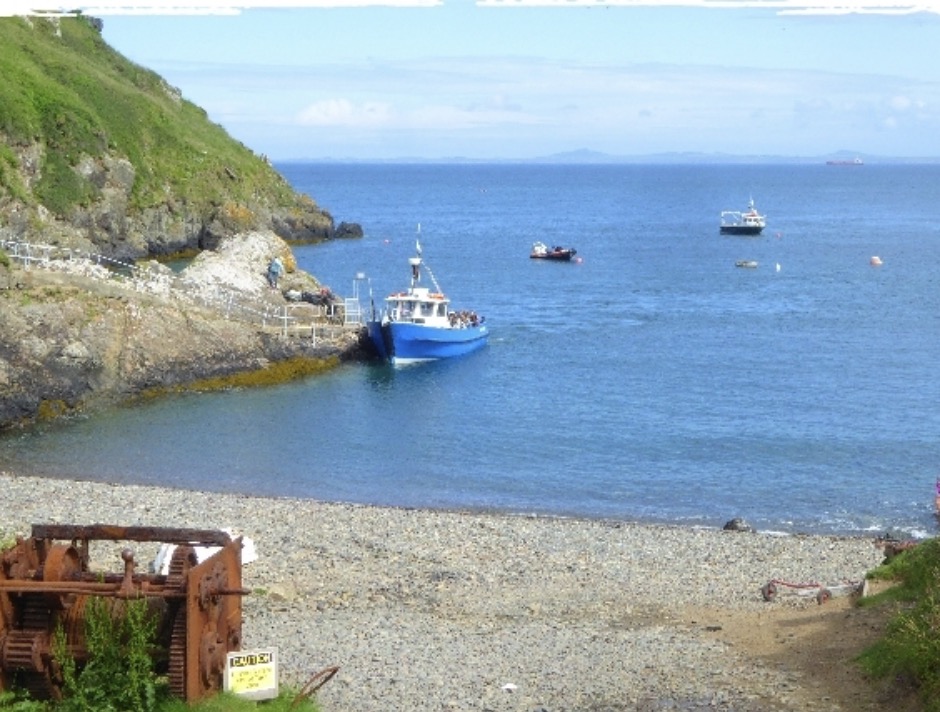 Martin’s Haven ….Dale Princess…. the only boat for Skomer and Skokholm

On this, the finale of our trilogy, we talk to Kenny Birdringer. OK, that’s not his real surname, but it has a certain, erm, “ring” to it! Ahem…

Bertie: “What a privilege it has been to share this week on Skokholm Island with you and your bird ringing friends. I had no idea how technical it is. How tiny the birds appear in the hand. And how enthusiastic your team of friends is in pursuing their interest. What a great social group you are. I asked Bobby’s granddaughter Giselle what she understood about ringing birds. She told me that it was so we could learn more about them. Where they go. How long they live. Just ten years old. She understood the principle, but had no idea how or by whom it was done. So how is your group set up?”

Kenny: “We are a combination of two groups. Maple Cross of Milton Keynes and Northants Bird Ringing Group. Groups that have worked together many times. We try to meet most weekends. There is a nucleus of senior ringers at the groups who have helped us all to learn and improve our skills. They have a very good reputation.”

Bertie: “Where do new ringers come from?”

Kenny: “From a variety of backgrounds. Some people see it as a new interest on retirement. Students also take it up as an additional skill in their quests to make their names in nature and conservation.”

Bertie: “So how did you arrange this week on Skokholm Island?”

Kenny: “The Islands are world famous. Some of us have been to the islands for day trips, and one of our senior ringers contacted the Welsh Wildlife Trust to see if it would be possible.”

Kenny: “Ringing can be seriously affected by the weather. Mist nets are less effective when blown around in a high wind. It makes them more visible and birds can get tipped out rather than captured. They can easily get very tangled so that time is taken up in untangling them. We do have the islands Heligoland traps as well.” 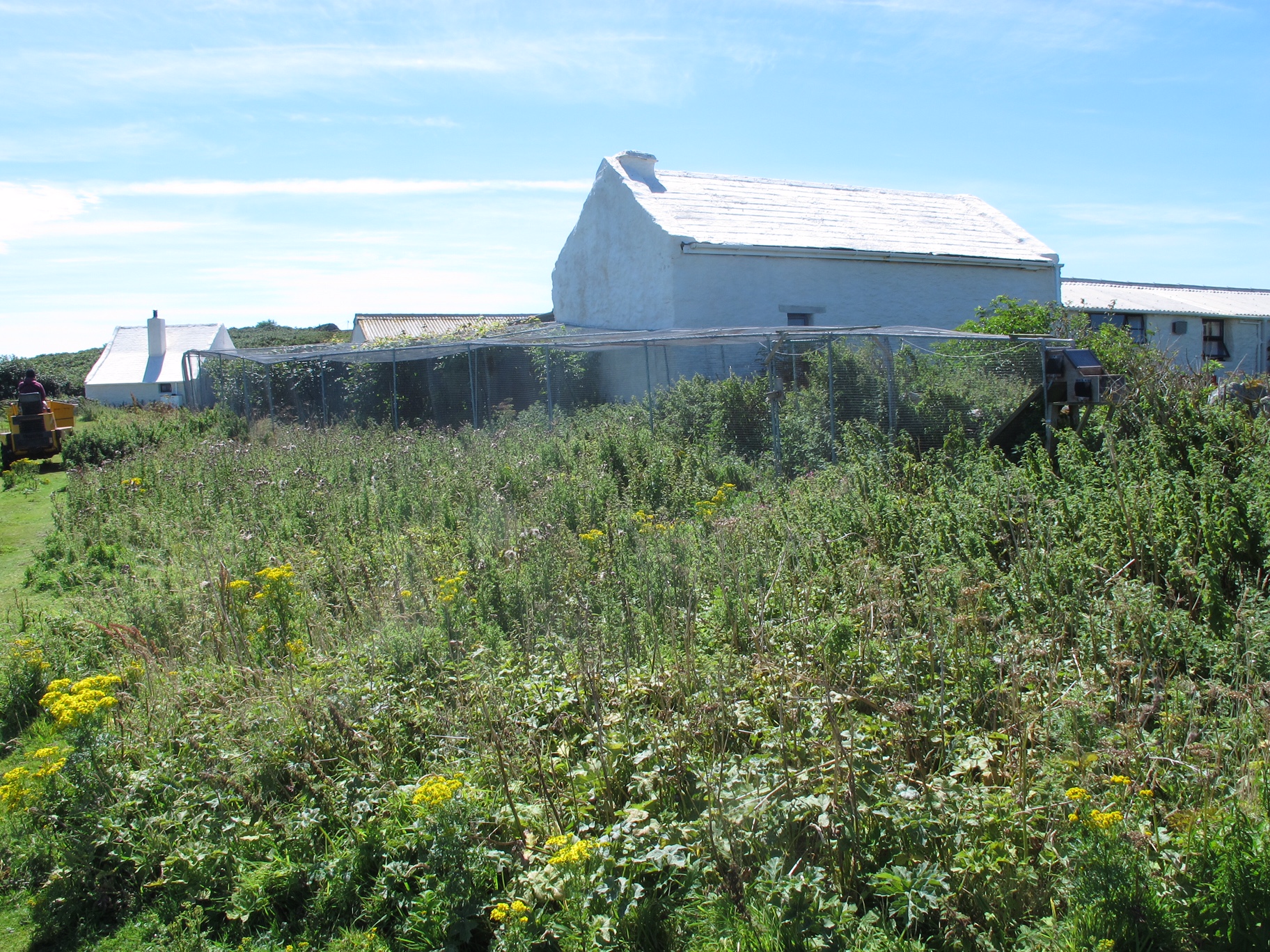 The trap is basically a long tube of chicken wire. Wide at the mouth. Getting progressively narrower. Full of vegetation. The bird ringers slowly walk through with the birds flying ahead until they are finally trapped in the box shown below: 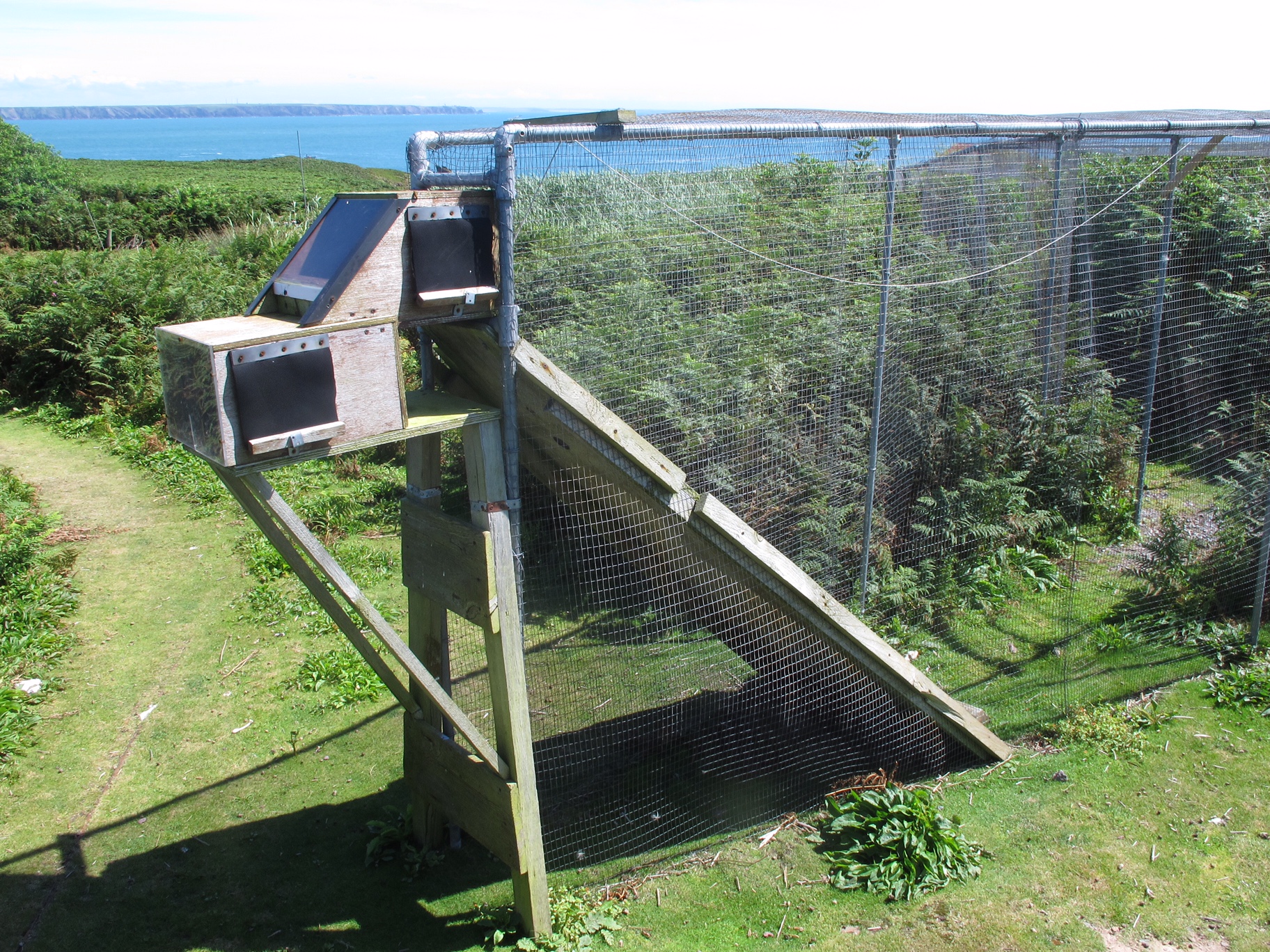 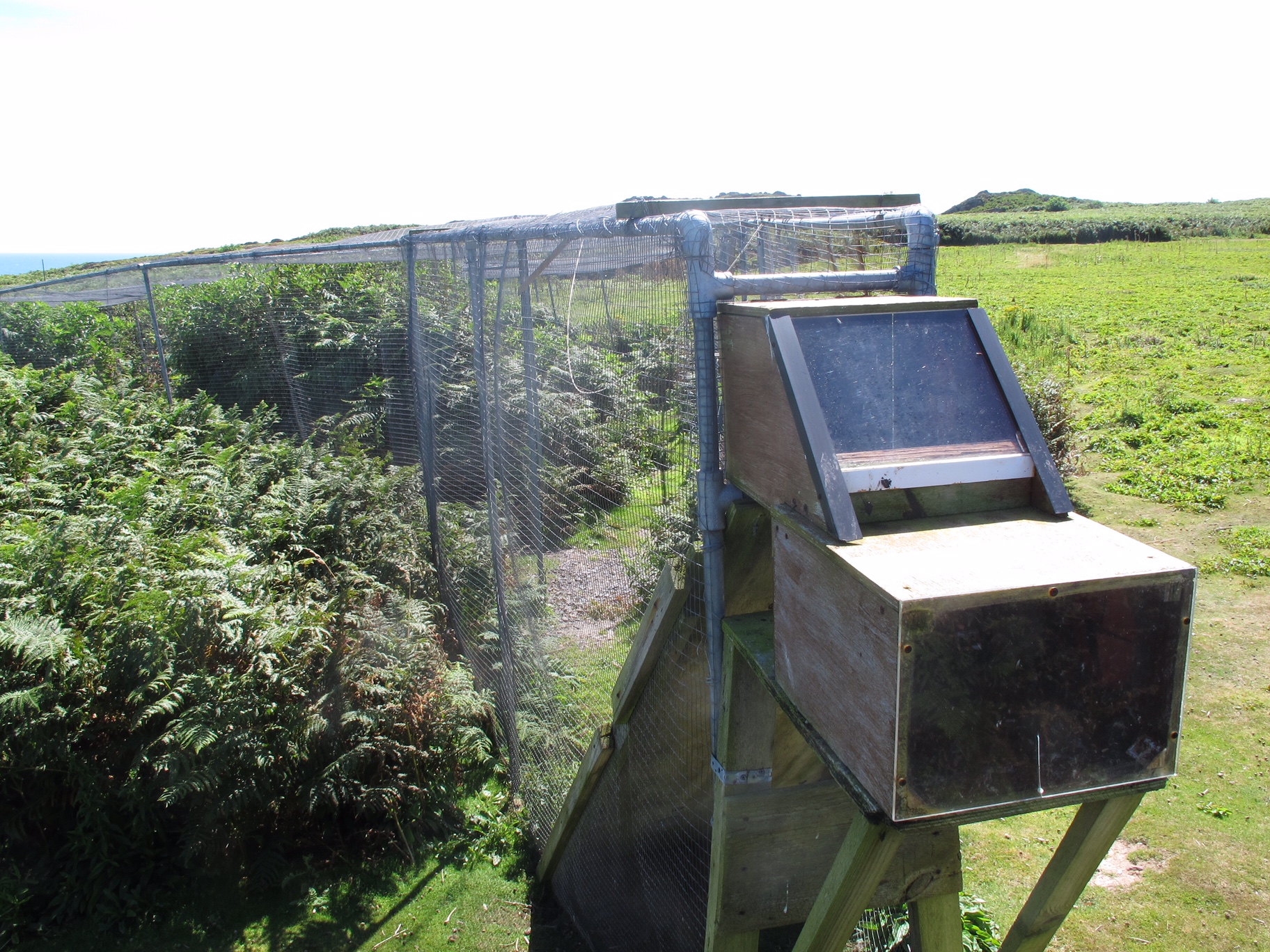 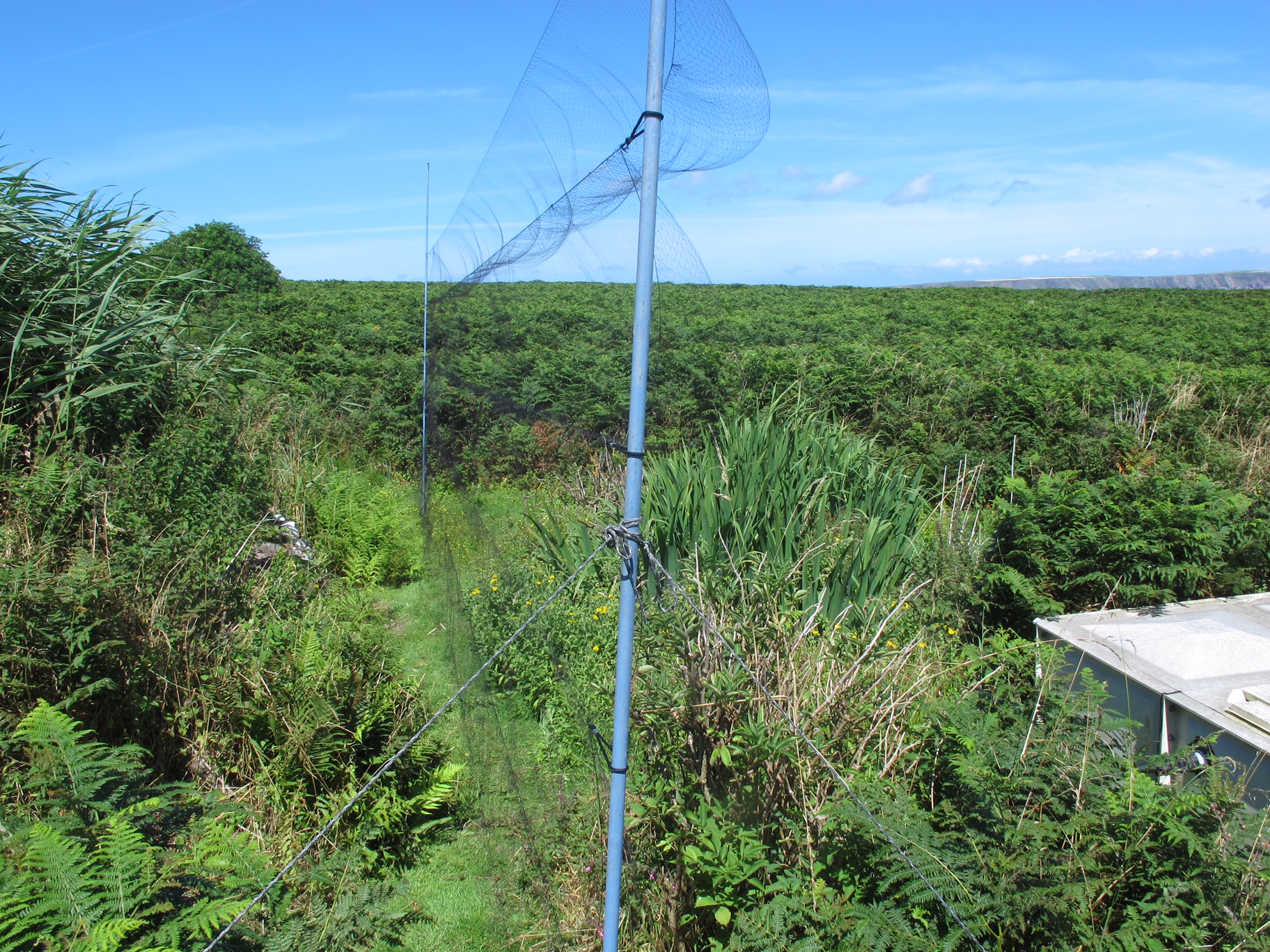 Bertie: “Your next assignment is to Portugal. Your annual trip to Sanyo Andre, where you know the warden. It’s for two weeks during the autumn migration season. So, Kenny – this is all about the group, but how did you get into it? You come across as a very calm, confident leader of the group. Someone with decades of experience. Someone the group looks up to.”

Kenny: “Thank you, but I am relatively new. I left Scotland and came to Milton Keynes for work. I met and married a lovely lady down here who has similar interests in natural history. I joined Buckinghamshire Wildlife Trust and eventually became a birder (birdwatcher). It was a natural progression really to move onto learning about ringing. Then I learned about the Maple Cross group and thought it would be an interesting hobby. My wife has always been very supportive of my ringing adventures and has her own natural history interests.”

Bertie: “Milton Keynes has a bit of a reputation of being a concrete wonderland enhanced by concrete cows.”

Kenny: “It still has the concrete cows that have a certain iconic status, It also has a lot of planned green space. Along with linking with Northants, which gives us a variety of habitats and a greater variety of birds.”

Bertie: “Well, Kenny. Those of this week’s group of “islanders” who witnessed your storm petrel night were given a calm, confident experience that we will never forget. Especially the privilege of being encouraged to release these small wonders of the ocean back into the night. So thank you, Kenny Birdringer. You and your group have given us an unforgettable experience.” 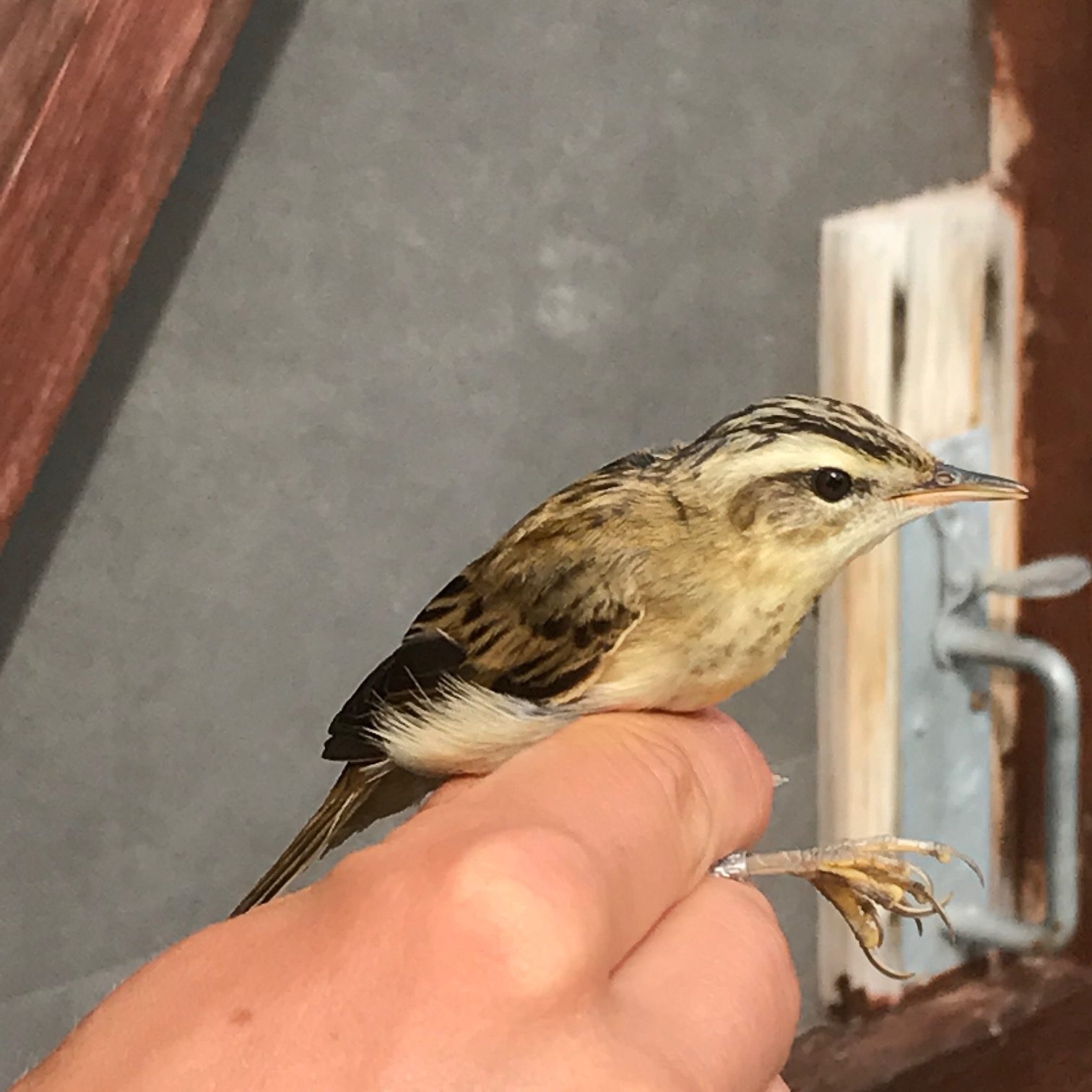 Ringing a Sedge Warbler. This tiny little bird will be on its way to to Africa soon. 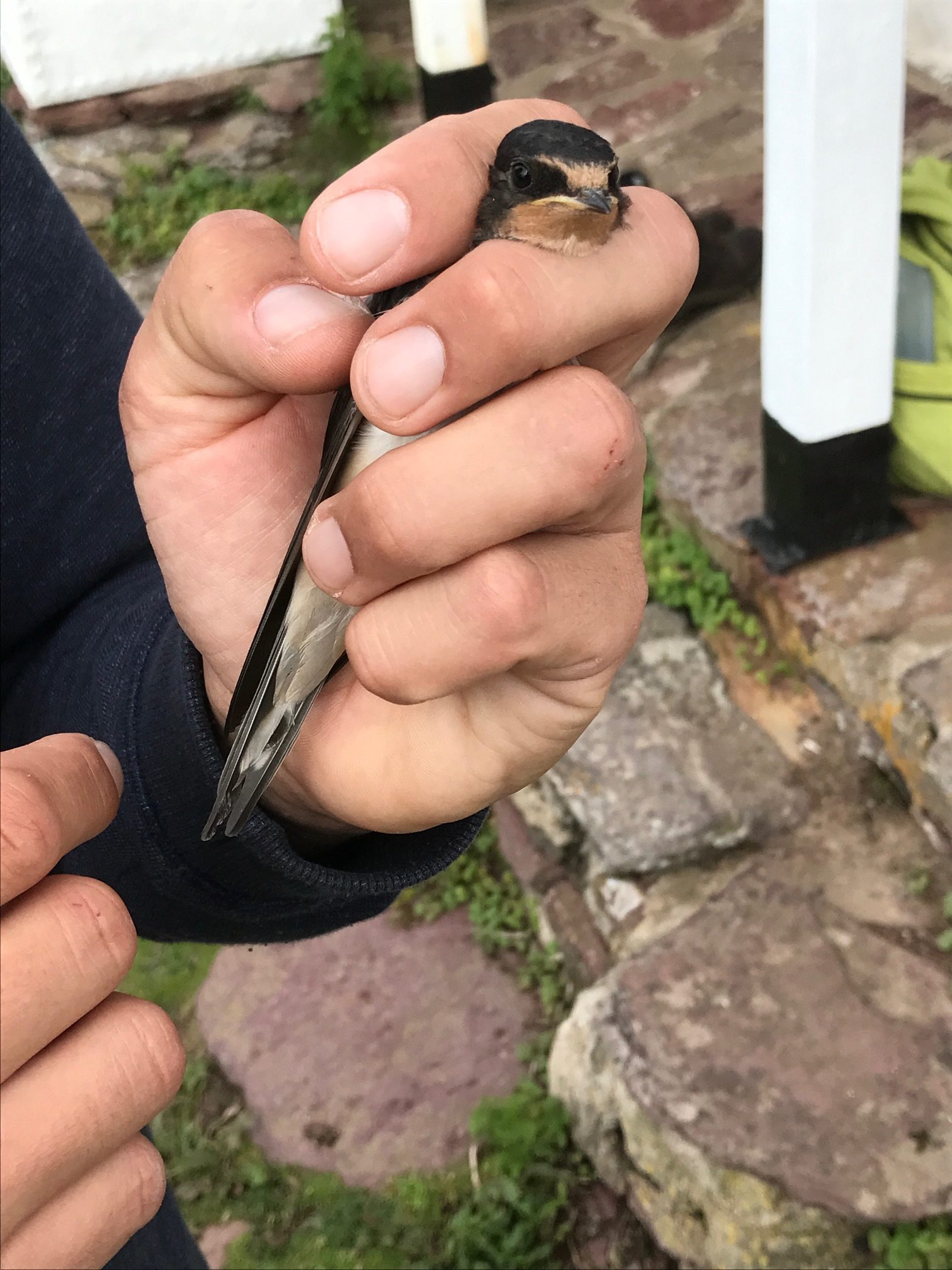 Ringing a young Swallow. On its way south soon too. 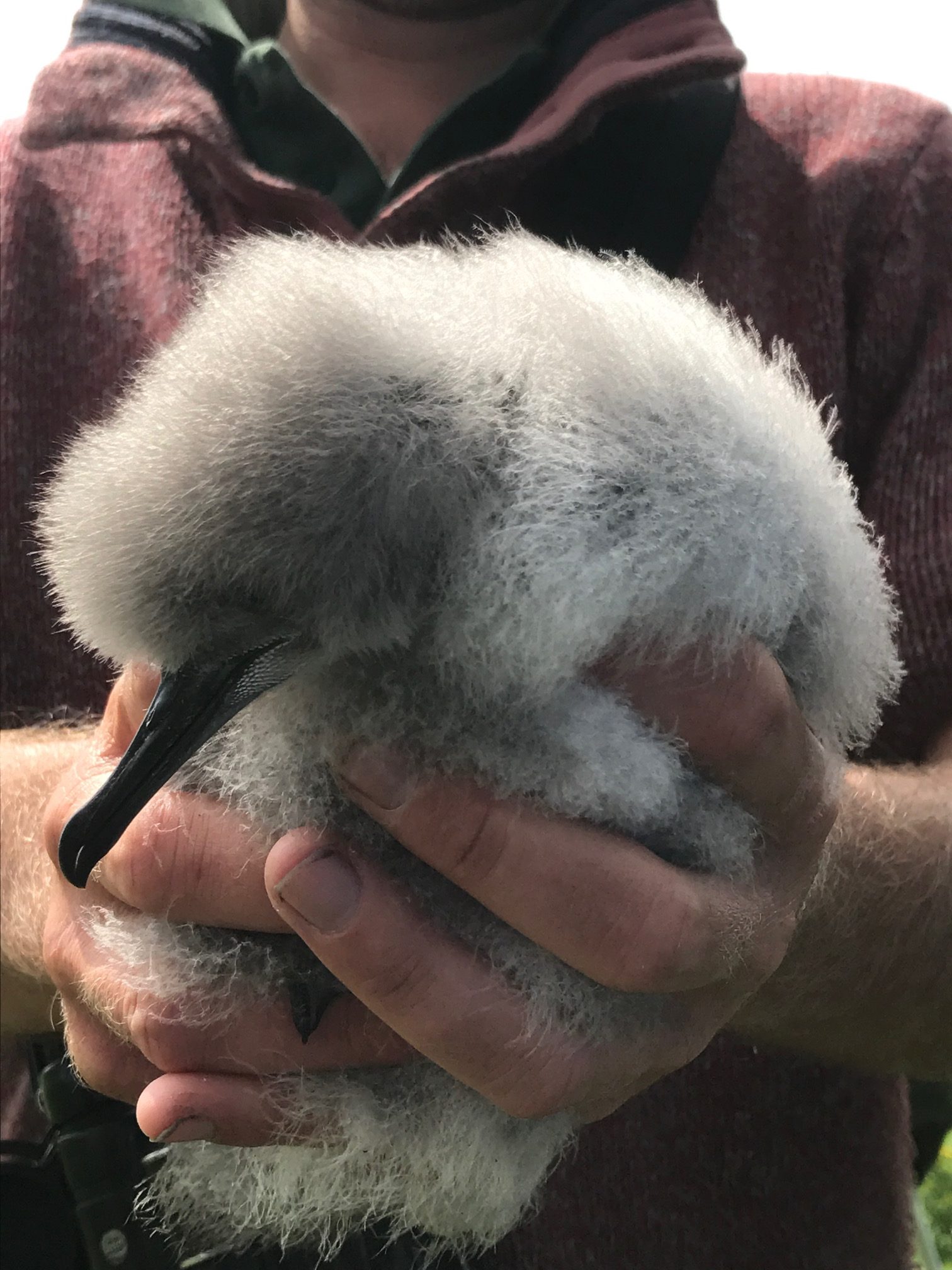 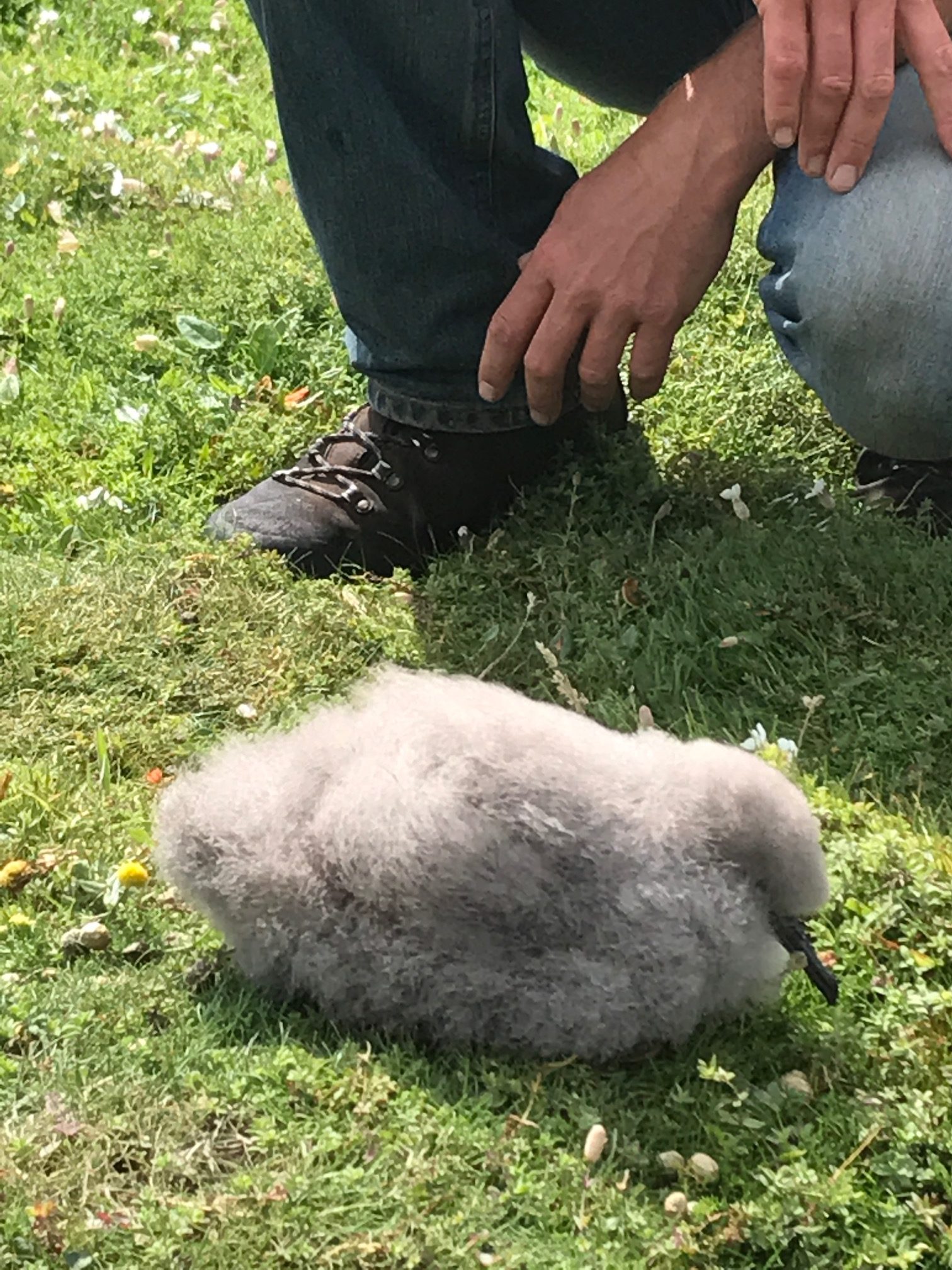 A Shearwater chick at the end of July. This will now look very similar to the adults. They (the adults) will have left, and all the youngsters will have to find their own way across the oceans to South America. From the two islands, say 200,000 starting a journey through life that could last over fifty years. 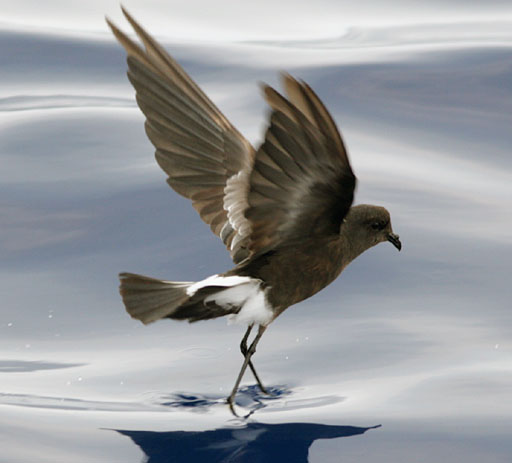 Storm petrel: The other iconic seabird on the islands. A tiny little miracle of creation that can literally walk on the waves in the most violent storms way out in the ocean. The word “iconic” being relative in an island world on both islands of Puffins, Razorbills, Guillemots, Fulmars, Peregrine Falcons and many many more. The principle adopted for the islands is that they are the homes of the wild creatures. We human beings are merely privileged visitors to their world.

Kenny Birdringer and his friends had to leave on the morning boat back to the mainland. Richard Brown (the warden) had a arranged a boat trip for those who could stay until late afternoon. Irresistible to Bobby, but count me out.

Bobby: “Twenty five miles out in a fast launch to the Celtic deep. Maybe Whales, Dolphins, Skuas. Who knows? Smashing through the waves at twenty knots we were overtaken by a Storm Petrel! Before most of us were overcome by sea sickness. I just about hung on in uncomfortable silence. (Bertie: “Blimey must have been bad!”). A large splash was all I saw of a Thresher Shark.” 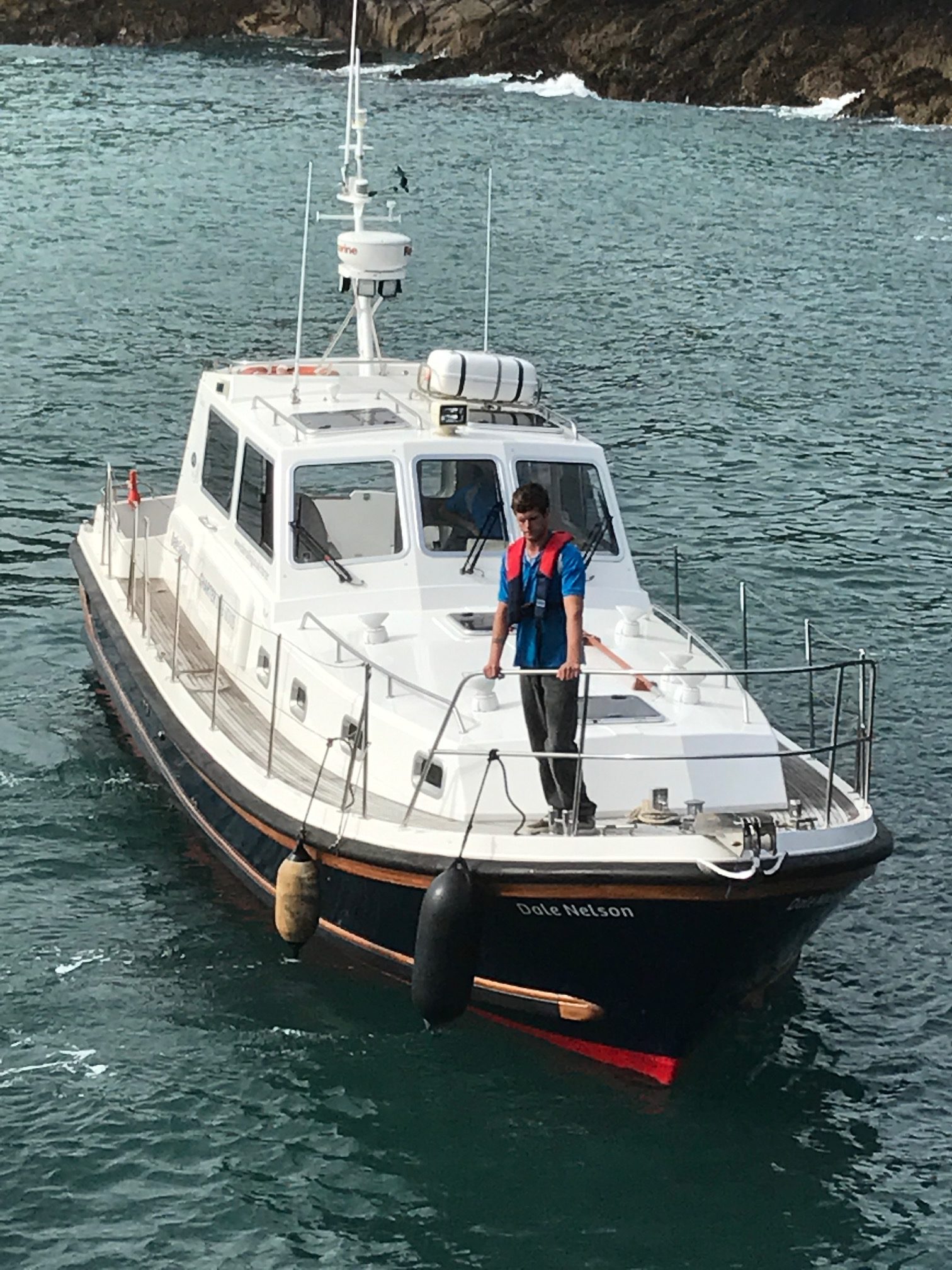 Richard had taken a bucket of revolting lure to entice sea creatures who like that sort of thing. Birds appeared from all over the place. Skeins of Gannets flew overhead, but still I couldn’t speak. 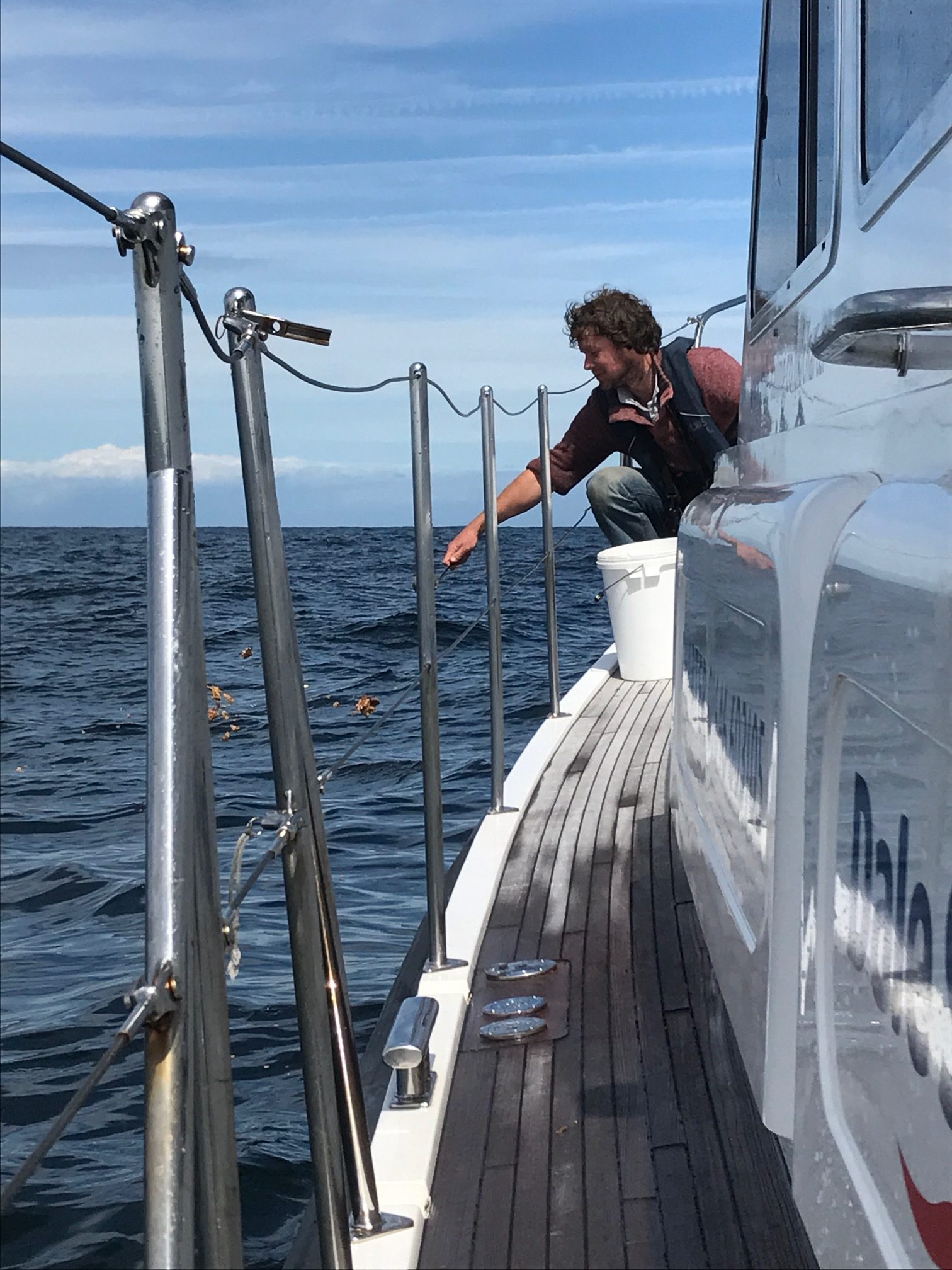 Turning north, the sea and the speed of the boat moderated. Complexions returned from green. We headed to the Smalls Lighthouse, 18 miles out. Automatic now; this must have been a lonely place when keepers manned it. 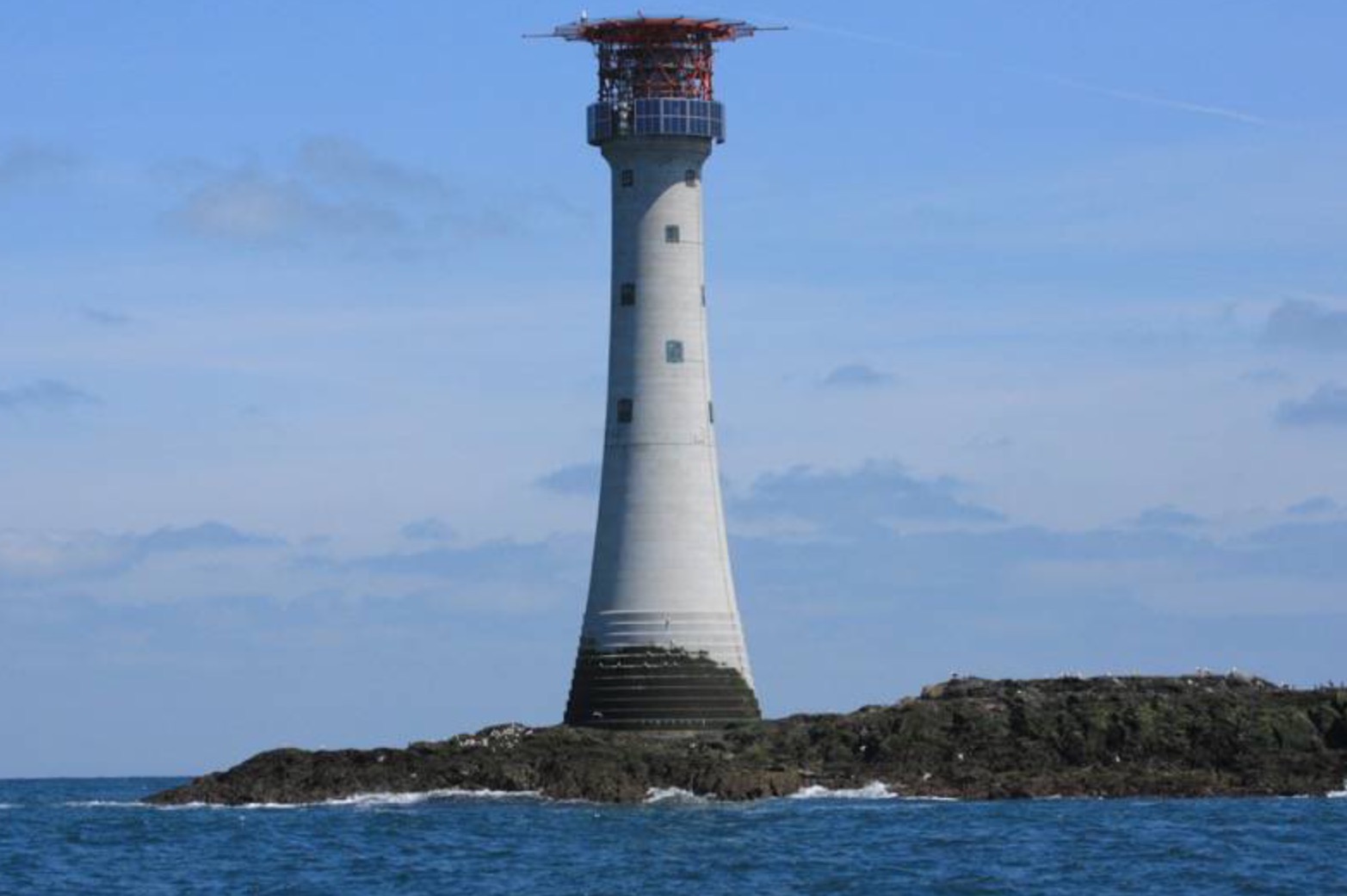 And finally, a real treat. A close encounter with Grassholm Island. 40,000 pairs of Britain’s largest seabird. The Gannet. 2 metre wingspan. An island looked after by the RSPB. Greg and Lisa were both wardens on Skokholm and Skomer. They have now been wardens on Ramsay Island across the bay for many years, and that includes a watching brief on Grassholm – also owned by the RSPB. Here is a picture, followed by a film made by Greg and Lisa. True islanders. 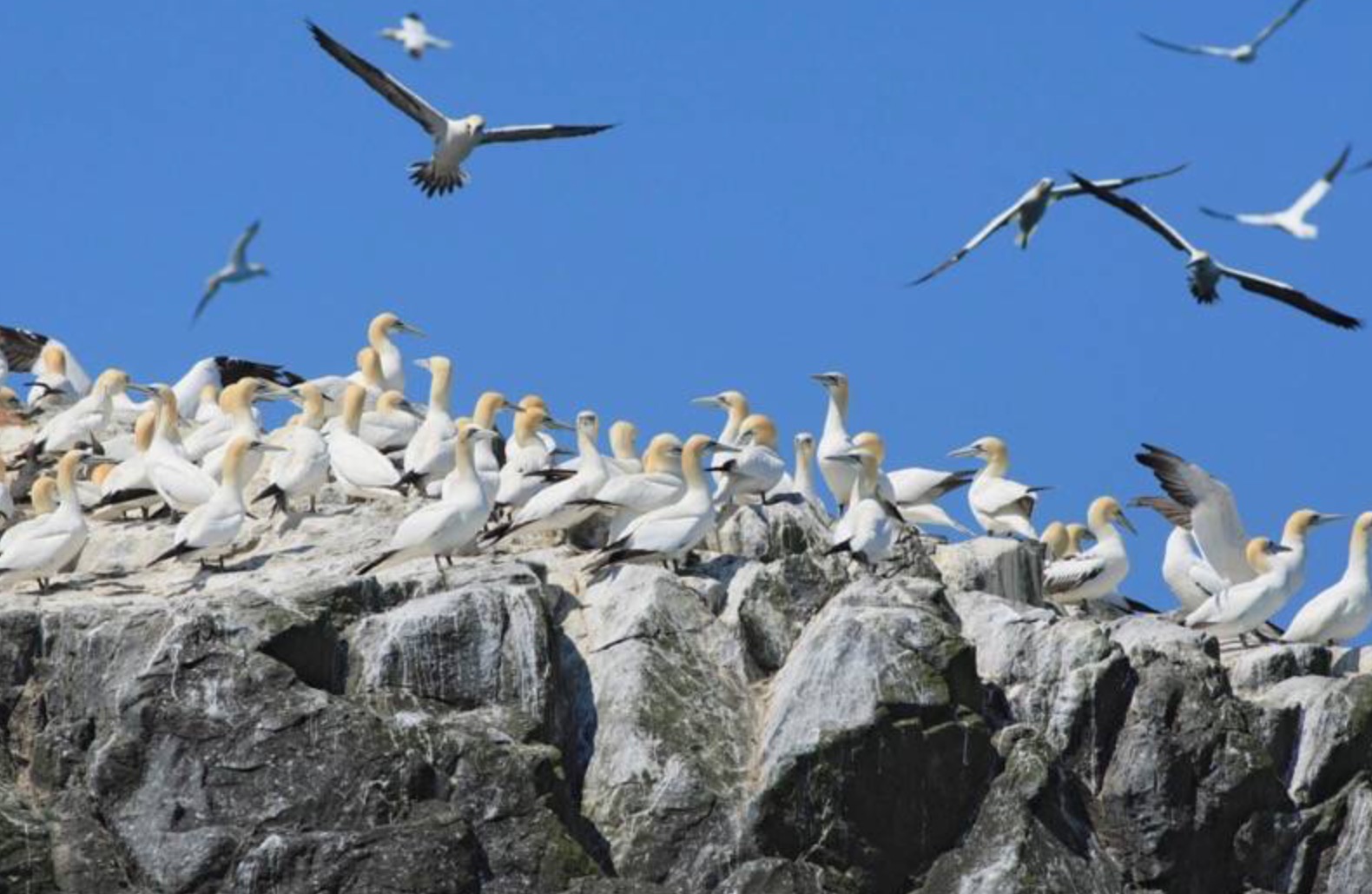 So, how much room does a Gannet need for its nest? Just enough not to be stabbed by its neighbour! Notice the plastic. Each year Greg and Lisa try to rescue some of the young ones who have grown up entangled in fishing nets and the like. Gradually being throttled as they grow. Or, of course, digesting plastic waste. 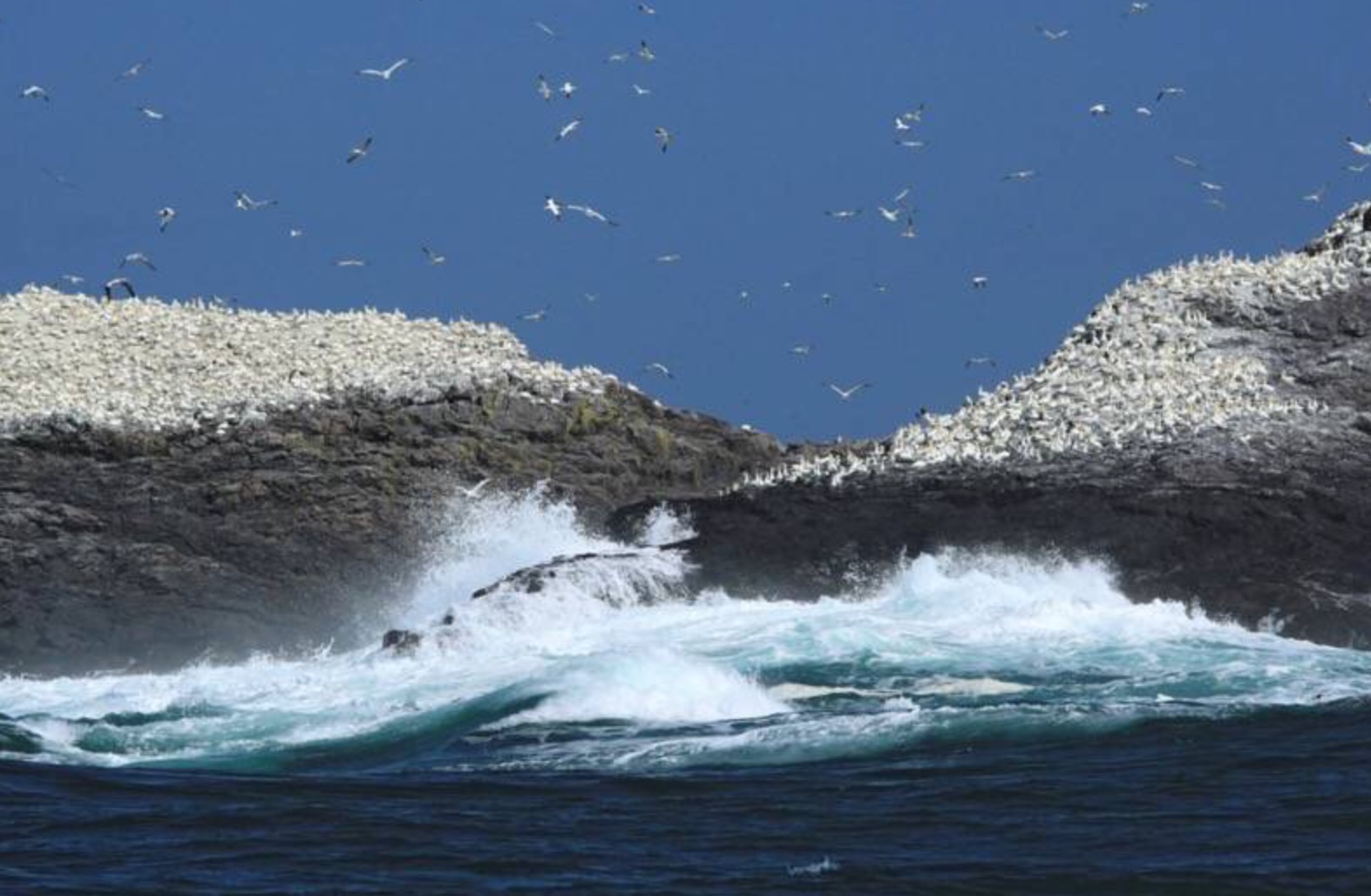 So endeth the trilogy. What a week that was! 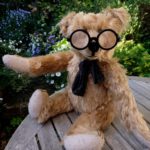 A new feature. Sometimes there are opportunities to ask our readers to join campaigns. Vote for favourites. Take an active part in the blog. Here is the first favour we would ask of you. You will recall that in our blog “The Bench” we told you about the Witches Broom Tree at Abinger Roughs. Near Diddleys Bench. Well, it is a finalist in England’s Tree of the Year. And we are asking you dear readers to follow the link and vote for it. Thank you!

A candle and a log fire in Lockley’s cottage on wonderful Skokholm Island. 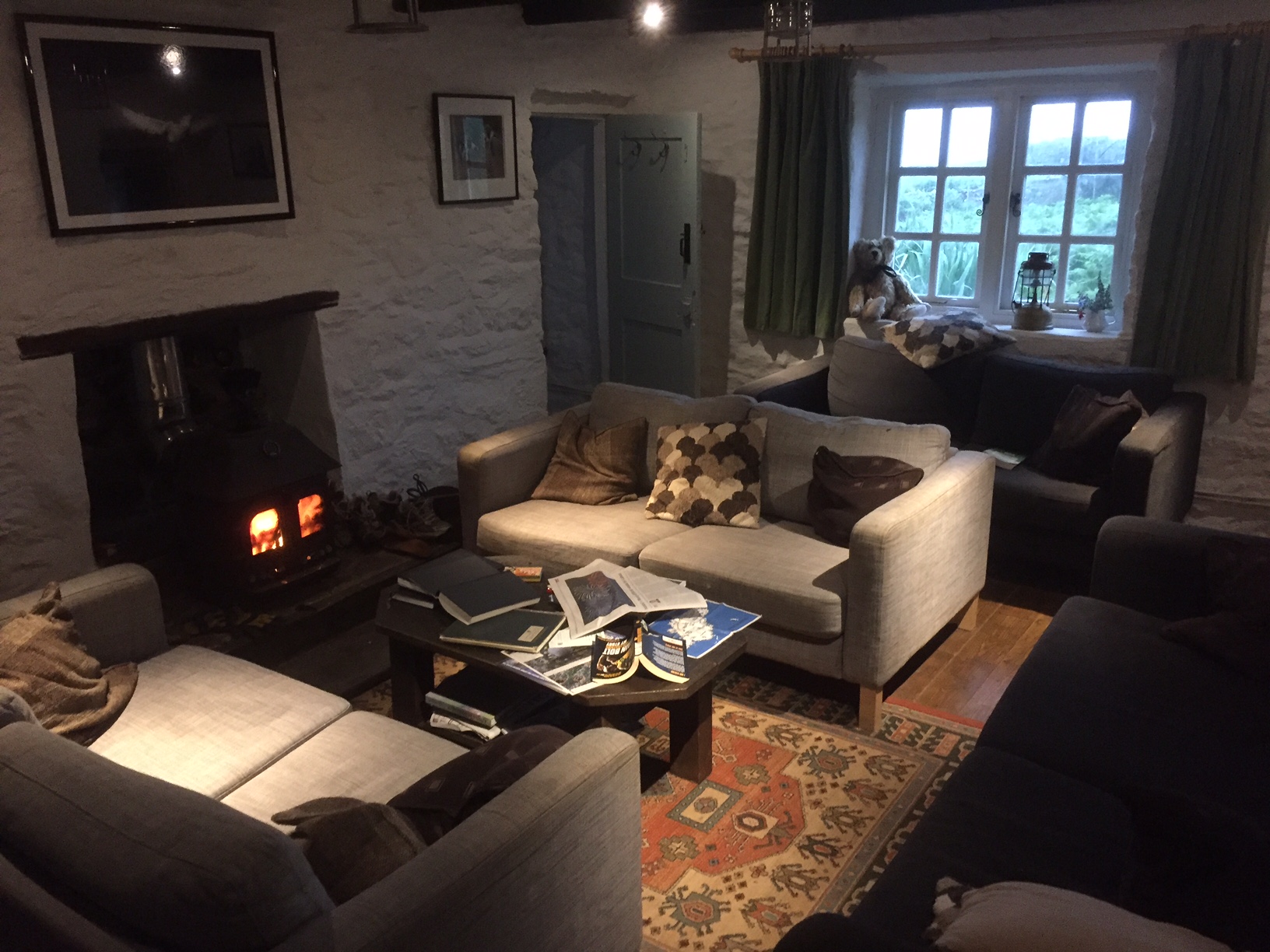