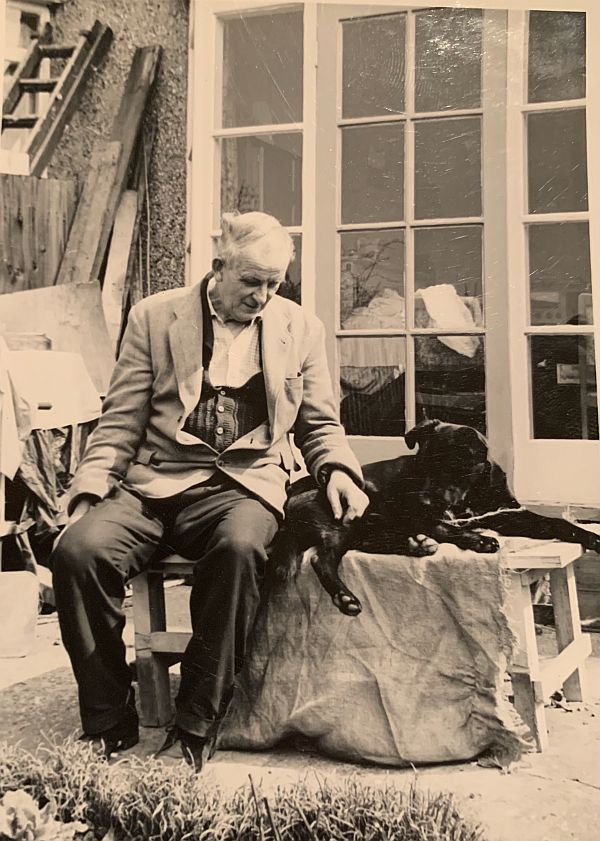 Bobby loved his old Dad Sid, and was heartbroken when he died on Christmas Day 1969. As we described in ‘Alf Garnett‘, he was an unforgettable character whose expressions live on in Bobby’s memory to this very day. And, we are told, he has recreated some of those memories in me. A teddy bear with a Sarf London accent.

Will Bobby ever forget his most enduring expression of all?

The dog in question was Jack. A black Labrador, with a character to match long suffering Sid. Who also had Mrs Ball, Dolly, to contend with. Her devotion to Jack was never in doubt. Whatever he did…

Jack was found as a stray puppy wandering the streets of Birmingham. How Wendy, Bobby’s sister, came to acquire him is lost in the eons of time. All Bobby remembers is cycling home from school one night to be confronted with the sweetest little black puppy imaginable.

Nevertheless, yet another pet for Dolly whose dogs, cats, rabbits, guinea pigs and cockatiel left him some way down the pecking list for affection. Particularly when puppies, kittens and baby rabbits took over the house and shed. Or when mashed potatoes stuck in your teeth due to the animal hairs embedded within. She meant well and now had a new dog. Why Jack? He followed Bruce. Shared the house with Cindy, a black cat. The rabbits and guinea pigs were in hutches in the garden. The cockatiel in his cage.

Labrador owners could enlighten me now. It was assumed at the time that Jack was unwanted and chucked out because he was not pure jet black. As you can see, he had a little white streak on his chest. Did that make him redundant to a breeder? Who knows. Was his later behaviour the result of mistreatment when he was very young? He certainly made up for it by ruling the Ball household for the next fifteen years or so. Ably assisted by doting Dolly.

Dolly and Jack were inseparable. Everybody knew them as a couple in that area of North Cheam. In her old age, people used to say he took Dolly out and worried about her ability to hang onto this powerful dog. What follows is Bobby’s memories of his Dad and Jack. At his most innocent, but still deadly, was the smells he created. Sid couldn’t stand it and sprayed his behind with Fresh Air spray… Which was nearly as bad as the dog. Ha ha ha… That Bleedin Dog!

Almost as bad was his habit of hogging the fire. In a house where the only heat was the living room coal fire he lay as close as he could without actually going up in smoke. Bobby can never forget the smell of singeing fur accompanied by a doleful look on Jack’s face. Wondering what all the fuss was about. That Bleedin Dog.

A daily ritual at terraced house 138 Brocks Drive was three bikes being wheeled through into the shed in the back garden. One night, Bobby left his in the hall. In those days pumps were often metal. Aluminium. In the morning the pump had been bitten flat. Destroyed. Covered in teeth marks. That Bleedin Dog.

Sid and Dolly liked going by bus to Tooting Market. One day they came back to find Jack in the bathroom. He had ripped down the curtains and eaten a bar of soap. And been sick all over the floor. That Bleedin dog.

Another time he managed to pull the more substantial dining room curtains down. That Bleedin Dog.

Bobby loved to tease him. No problem with Cindy but all other cats were unwelcome. The end of the long narrow garden had a six feet high fence. Bobby would shout “CATS” pointing down the garden. Ha ha ha. And Jack would take off hitting the fence at full speed and scramble over top. That Bleedin Dog would then disappear and Bobby would have to find him.

Jack had an amazing skill that really endeared him to Bobby. He could dribble a football with his nose flat out across the park. It was brilliant, until he got bored one day and ran off. The park was a fifteen minute walk from 138. Criss-crossing the estate and two busy main roads. How on earth could he tell his Mum Dolly he had lost Jack? Trudging home in trepidation to find Jack sitting on the doorstep. That Bleedin Dog.

But then came the ACCIDENT. One dark night, Jack did a runner. They searched the roads and found an accident in Gander Green Lane. (Home of Sutton United). Jack had managed to collide with a chap on a Lambretta. The chap was bruised but OK. The Lambretta was dented. Jack went home with Dolly, who stayed up all night with him. Sid later paid for the bike to be mended. That Bleedin Dog.

There are many many more stories. Jack outlived Sid. Almost outlived Dolly, until she went on holiday with the old people’s club and Jack was put in kennels at Boxhill. He managed to wreck the kennels and escape. The family were told he had become seriously unstable and could not go back to an old lady. And that was that. We were relieved really, because it was only a matter of time before something bad happened. Eating broken windscreen glass out of the gutter wasn’t a good idea. So it was goodbye to That Bleedin Dog.

Or was it? There is one last story, spread out over thirty years.

In 1962, Bobby passed his interview for the Legal and General Assurance Society. The minimum requirement was four O levels.

Bobby: “Mum. Have you got my GCE papers?”

Bobby: “Whatever is the matter, Mum?”

Dolly: “Jack ate them. You can still read them.”

And so they were presented to the L&G as you can see below. Ha ha ha. That Bleedin Dog.

But now, we are in 1992. Bobby was made redundant by the L&G after thirty years and got a job temping with the Department of Transport (that became the Highways Agency). Just one month, that became two, six and a year. When they finally suggested he join the permanent staff as an AO. Administrative Officer. As a new entrant, he would have to provide evidence of his seven GCEs.

THAT BLEEDIN DOG was once again the centre of attention. You can still see the teeth marks on the increasingly stiff paper. And it was a good story of a dog that was loved beyond common sense. A dog that was to be the last that Bobby ever lived with. And a pleasure to recount those mad days of Jack and Sid. Simmering under the dining room table. Sid trying to push him out with his foot.

“That Bleedin Dog will be the end of me.” 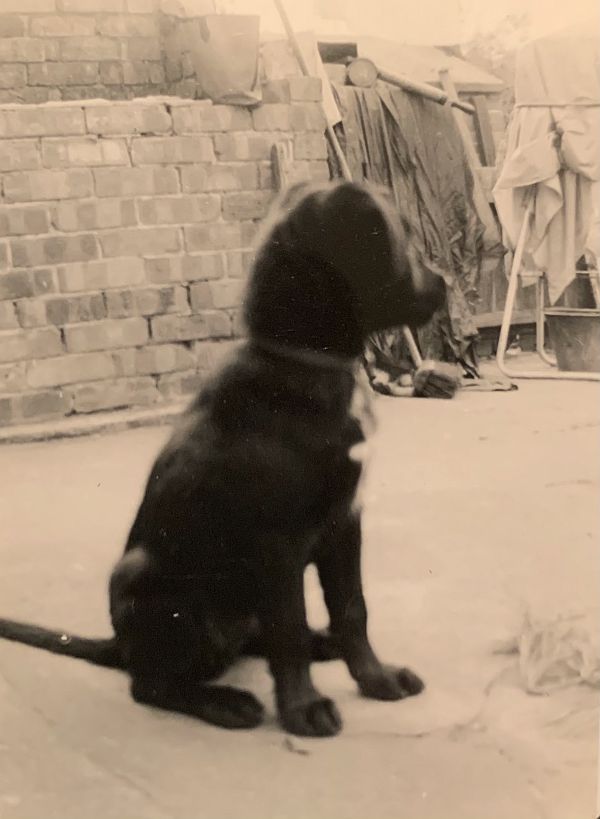 The sweetest little puppy that nobody wanted. 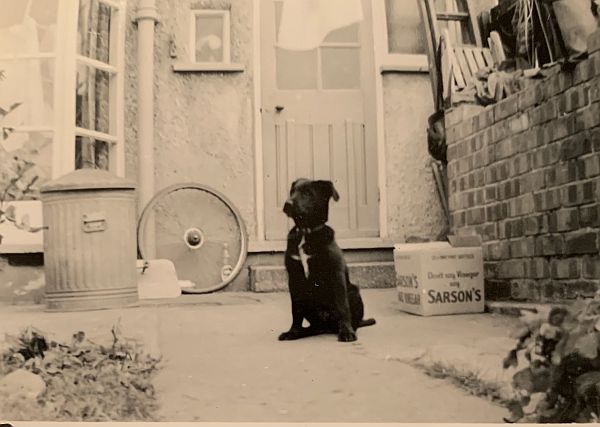 Cor… Those dustbins years ago were hard work for the dustmen who, with no mechanical assistance at all, had to lift them on their backs to tip into the dustcart. Sid was probably mending Bobby’s puncture and that explains the wheel. He always looked after Bobby’s bikes. 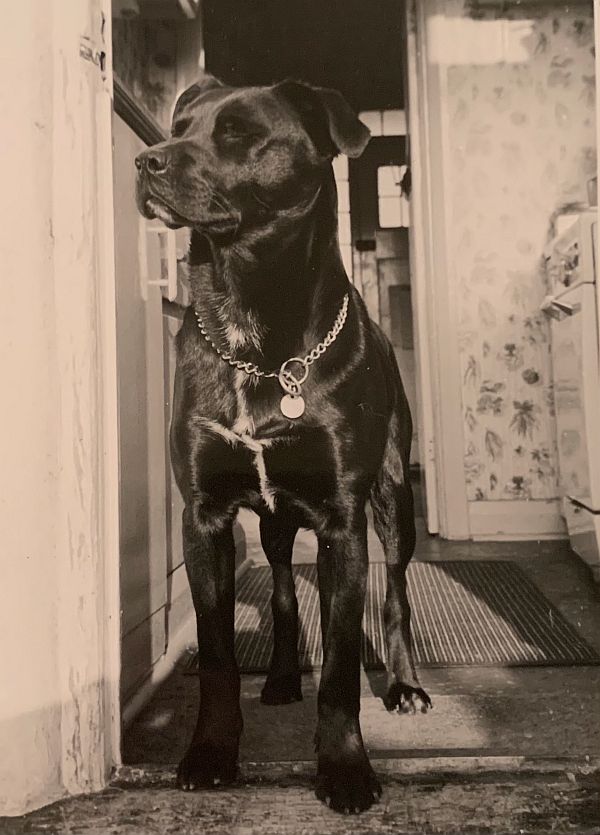 What a handsome dog he became! Seen here sunning himself on the kitchen doorstep. 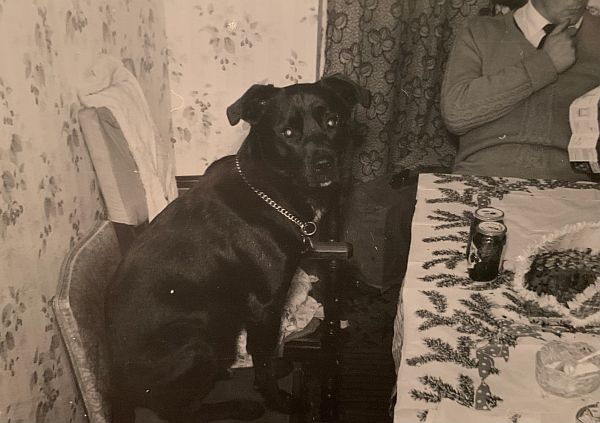 He even had his own chair at the sparse Christmas dinner. 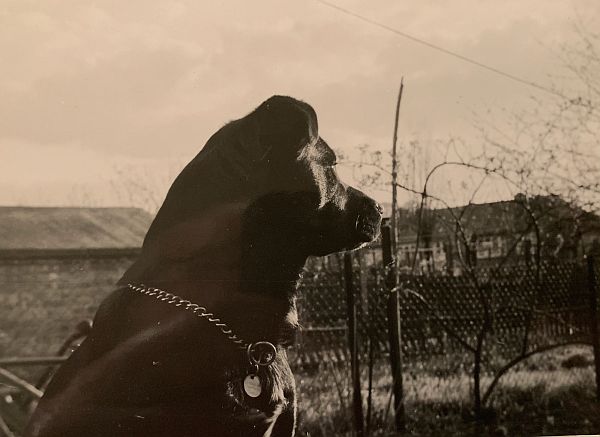 The Park Farm Estate in the early 60s. Brocks Drive.
Looking across to the back gardens of Henley Avenue. 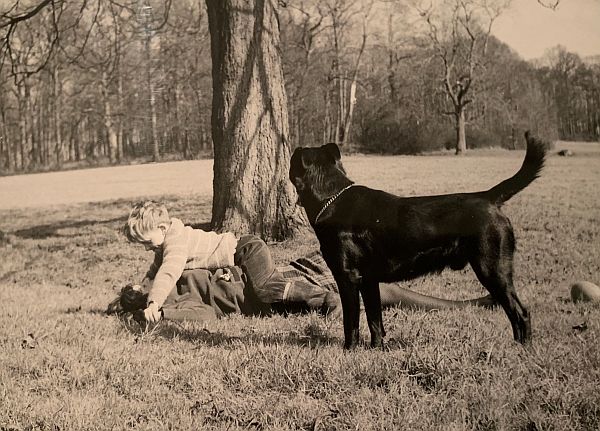 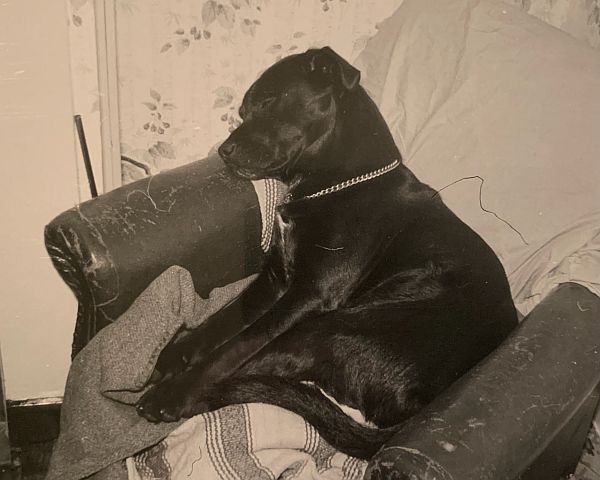 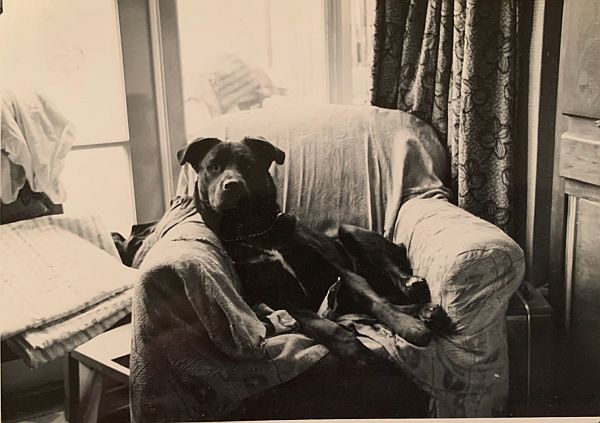 Cor … look at that. The sideboard cabinet to the right was “Furnikit’ and came as a kit that Sid put together. 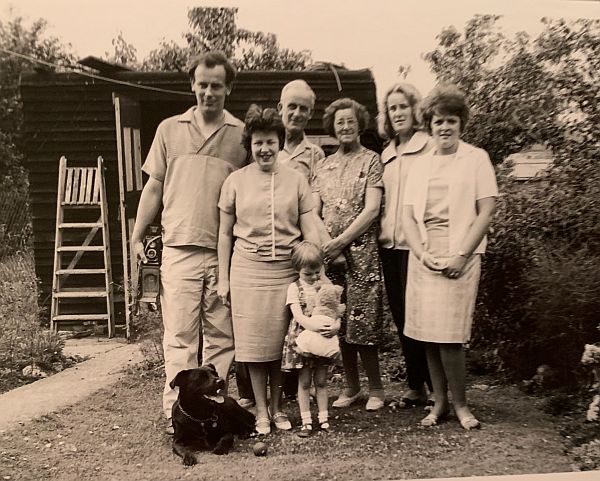 The family came. Tony, Sid, Wendy, Sylvia, Dolly, girlfriend Kate and Elizabeth with the teddy bear. And Jack. Elizabeth now our resident genealogist.
Only her and Kate still with us. 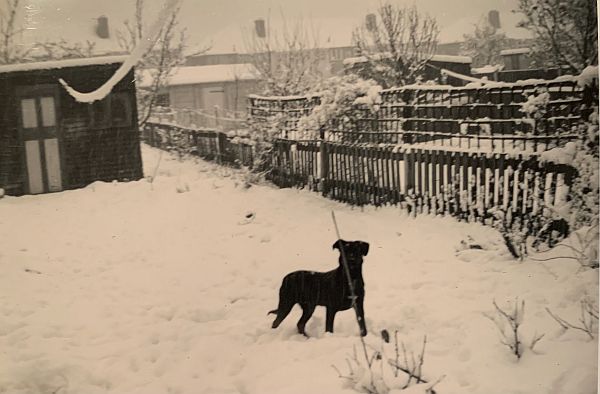 It snowed a lot in those days. 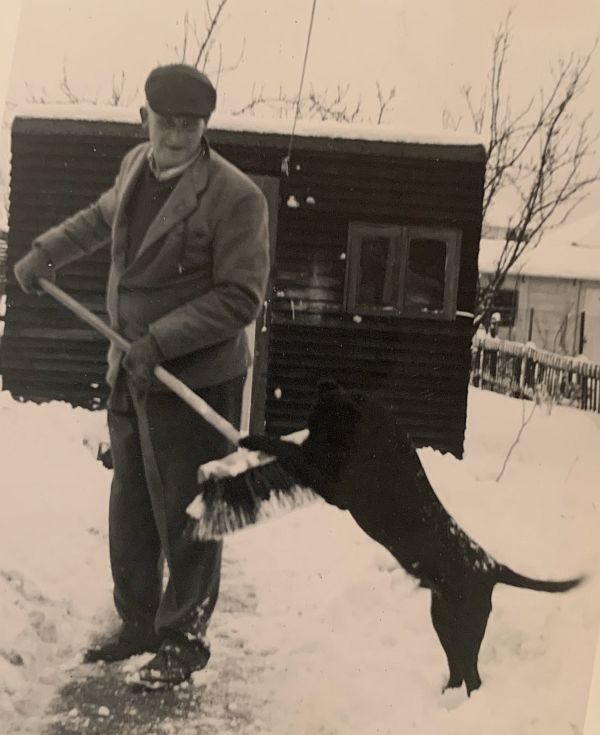 Jack loved the snow and Sid. Looking at this picture I can see Bobby as he is now. 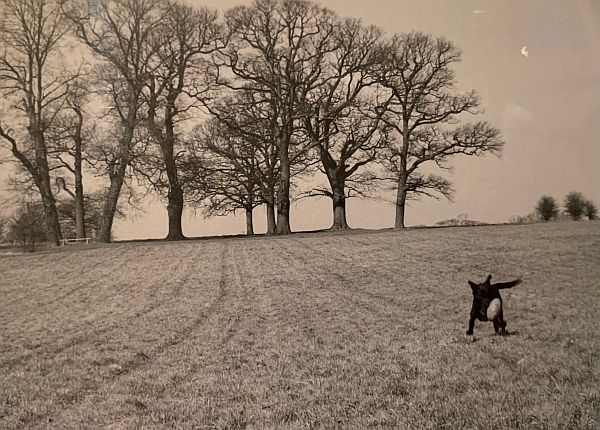 Football at Cheam Recreation Ground. Bobby had a rugby ball for a while to really test Jack. Jack just bit it flat to save messing around. 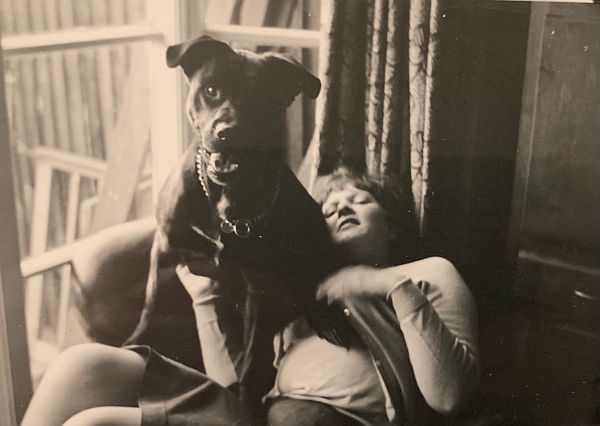 Jack and Kate getting to know each other. 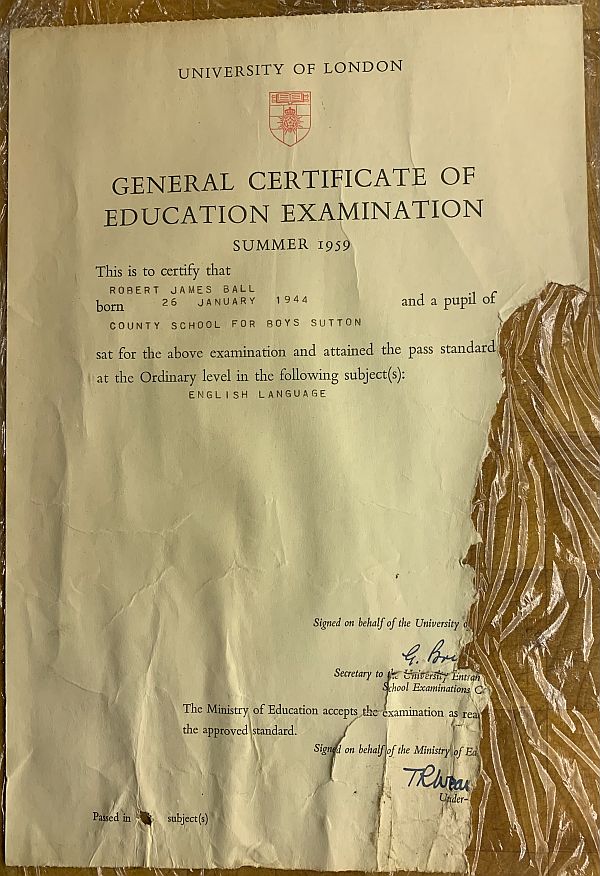 English Language passed at 15. A year early. He was told he was good at writing stories. 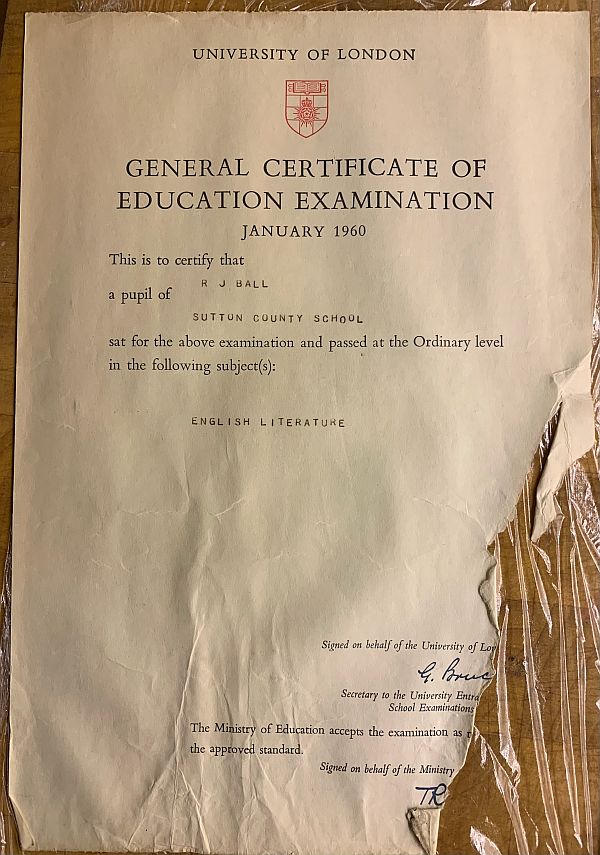 English Literature also passed early and entirely by going to classes after school.
Including the Ancient Mariner. Which he hated.

And the other five. Art was a doddle. One of the suggested scenarios was “arriving at an airport.”. Gold dust to a sixties plane spotter.
And the only subject he ever topped the class in.

All a long time ago. Took Seven. Passed Seven. Left School. Earning money was more important in those challenging days than contemplating University. Something Sid and Dolly could never afford and Bobby didn’t want anyway. 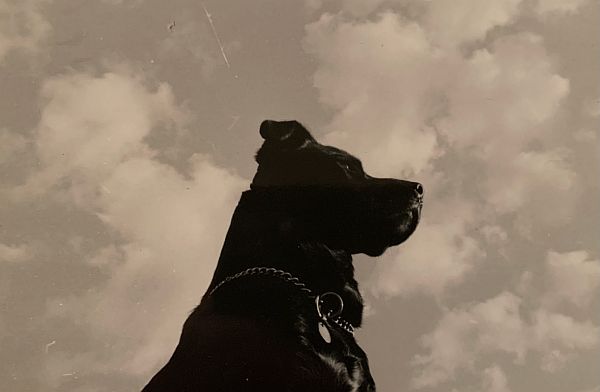 You really were a handsome dog Jack. 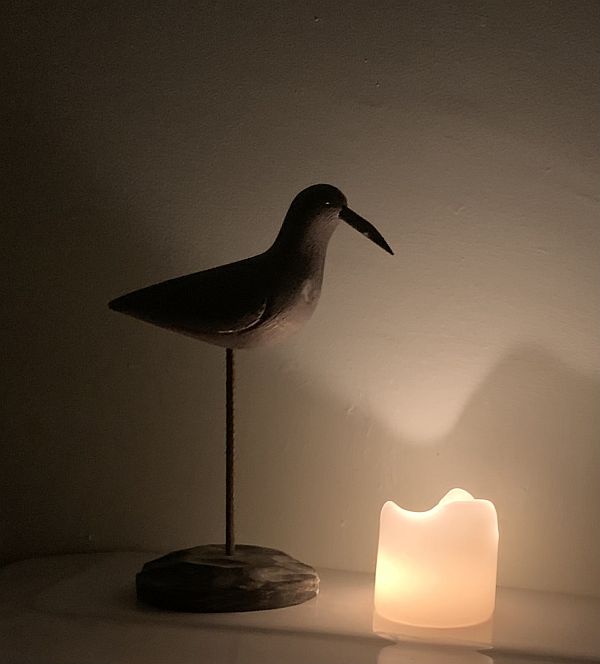