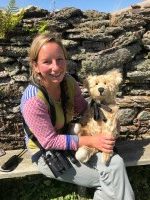 Just over a year ago, the very first blog posted for Mindfully Bertie was entitled “Dream Island”.

A story about a beautiful island off the Welsh coast, and Bobby’s love affair with Pembrokeshire and its islands. A year later, we are back to start a Welsh season for Mindfully Bertie. Commencing with a trilogy of characters met on Skokholm Island. And here is the first. Giselle Eagle. Richard Brown’s lover from last year’s blog. I can say “lover” as it’s sanctioned by both the BBC and ITV in their programmes about these two young lovers… I do hope you watch these videos. Particularly the BBC one filmed on the island. You may see what the attraction is for people like me or maybe people like you –

Details of how to stay on Skokholm or Skomer are at the foot of this blog.

But first, please read “Dream Island”, as it will set the scene for one year later. It will also explain why Bobby, having a day spare in Pembrokeshire before the boat, chose to go back to Skomer. And take me. Meeting his old friend, boatman Karl, on the way over.

Boatman Karl for the Dale Princess.

The warden, Ed. And some of today’s volunteers. Noticeably younger. Nice corporate shirts. A great experience to live and work on a world famous wildlife island for a week. Just as Diddley, Bobby’s son Andrew, step daughters Jessie and Amber and many friends did in previous years.

Ed, Warden of Skomer Island, with one of today’s volunteers.

Back on “Bobby’s Island” where he volunteered for nineteen years.

Me in the wardens’ office. A “room with a view”.

Views from the trig point. The highest point on Skomer Island. Looking across the sea to Ramsay Island.

The Garland Stone. Most northerly point of Skomer. Looking across St Brides Bay to Ramsay Island and the St David’s Peninsular.

“Oi, Ballcock. Boat cancelled Monday due to adverse weather. Should be OK Tuesday.”

Skokholm is further out to sea and more vulnerable to the vagaries of maritime weather. Last year we left the island a day late. So swings and roundabouts. And another hot shower at Rosemary’s in Solva. Bobby’s favourite B&B.

Monday came and another curt text from Mr Brown:

“We are on for tomorrow. Boat leaves 07.00. WHATTTTTTT! Boatman makes the rules (bleeding Karl).”

Leaving Solva at 05.30 in torrential rain, we were heading for Martins Haven. The boat. Twelve new acquaintances doing the same as us. An amazing pile of luggage and boxed food and beer was “human chained” onto the Dale Princess.

Martins Haven, with the Dale Princess. The departure point and boat for Skokholm and Skomer islands.

And chained off half an hour later on Dream Island. Still only eight o’clock. Mr Brown explaining the mechanics of non plumbed in two section composting toilets. If you want to know. I’ll tell you. Doesn’t bother anyone. We are all sitting in the sunshine looking across the sea. A party of bird ringers eager to get started. They were great. (Kenny Birdringer is the third of the trilogy.)

Sort out your food into the chest fridge and larder room and back to our favourite room in the cottage. A whole week of… anything or nothing. Quite a bit of mindfulness. Evening logs when everyone retires to the Cottage to share and record what they have seen. All transmitted to the world under skokholmblog.

Island transport for the luggage.

The wind blew. The rain crashed down. The sun came out. The Cloud Appreciation Society should have been there.

The Bird Ringers caught lots of birds, including the stars in the middle of the night. Manx Shearwaters. See “September“.

Later in the week, a memorable night recorded in “Kenny Birdringer” with an exquisite, mysterious seabird. The Storm Petrel.

And I interviewed Giselle.

Then there is Gisele (Giz..a..la). His brief encounter on the train to Venice. Please read “Brief Encounter“. It’s good for his ego. Just three hours, but he hasn’t stopped talking about it since! Hahaha.

And now, of course, Giselle Eagle.

You tell me you come from Northumberland. But what is the story behind your posh name? Bobbie’s granddaughter is named after the ballet that her parents love. How about you?”

Giselle: “The name came about from a family issue that led to the name being suggested to my parents who liked it.”

Bertie: “And Eagle? Is that a Northumberland name?”

Giselle: “Not particularly, but there are other Eagles in Northumberland. Probably from my family.”

Bertie: “At school, you must have been surrounded by Ethel Hardwick’s, Gladys By Hecks. Et al. When they read the register and you answered “Giselle Eagle” you must have heard a sharp intake of breath. Sighs of “ye gods she’s posh”. Did you have to dumb down to appear common?”

Giselle: “No. But, like all youngsters, you get nicknames. At Uni everyone knew me as Geagle.”

Bertie: “So, when did natural history become important to you?”

Giselle: “My parents were not birdwatchers or anything like that. But we loved family walks in the Cheviots and my family have always been very supportive of my interest in the natural world.”

Bertie: “Was it always birds – or everything?”

Giselle: “The whole natural world, but birds were always my favourite interest.”

Bertie: “What was your journey to Bardsey Island?”

Giselle: “I met Richard in somewhat bizarre circumstances before Bardsey. (Got that wrong last year). I had taken a position with the Wildfowl and Wetlands Trust at Washington. Not too far from home, but living in Prudhoe. We are actually the product of a Facebook mixup. There’s lots of Richard Browns. I shared posts with one without a profile picture. Got him muddled with another one, but then he posted a proper picture.”

Bertie: “And you thought … phwoar, he’s a bit of alright. Needs tidying up a bit, but potentially could scrub up well.”

Giselle: “Not at all. I tried to “defriend” him, but he wouldn’t go away. In the end, I agreed to meet him. He was lining up Bardsey again and I went with him. Loved it there. Two and a half years.

Bertie: “And then Skokholm came up for grabs?”

Giselle: “Richard suspected that an opportunity could arise with Skokholm. He knew the island from his Skomer days. Knew the trust would be looking for wardens following the rebuilding programme so magnificently undertaken by volunteers.”

Bertie: “And it did. By this time you were a couple or, as BBC morning television would have it, two starstruck young lovers destined to see out your love affair in the most romantic setting. A beautiful lonely little island, somewhere off the Welsh coast. The national papers were full of it. Such stories really touch the heartstrings. And, quite recently, you entertained Robson Green for an ITV programme where the theme was still two lovers on a lonely Welsh Island. He even played a love ballad on his guitar for you!

Richard and Giselle with Robson Green.

You clearly love the Island. Sharing it with those setting out on their own adventures. Into careers, passions, obsessions with the natural world. Or, like Bobby, just loving a week away from the Madding Crowd. The short term visitors from a wide variety of backgrounds. We won’t let on that you are not here on your own very often.

Before Richard Brown, could you ever have contemplated the life you now have?”

Giselle: “No, but I do believe that sometimes fate plays a part, and what will be will be.”

Bertie: “My blog states: ‘Yesterday is history. Tomorrow a mystery. So live for today‘. Is that where you are? Enjoying life in this wonderful place? Accepting how lucky you are and living in the moment?”

Bertie: “You could not become Mrs Brown, who is a bloke anyway. But, how about Mrs Brown-Eagle? Not surprisingly, I have left Bobby Ballcock to last. It’s his alter ego. Anything dodgy, he blames on Bobby Ballcock. The “Story of Bobby Ballcock” has just been posted on the blog. So it was Bobby Ballcock who got it all wrong… about pregnancy. Bobby Ballcock who sent you a dozen red roses (emojis) and told everyone. Whilst Bobby is sorry for his alter ego’s impetuosity, someone on Facebook “sowed the seed”. That left David Boyle confirming from the Caribbean that no seed had been sown. I know he knows everything, but didn’t realise just how much. And while many of us complain about the impact of social media, I doubt that you are one of them…

So, Giselle, thank you. We have had a wonderful time this week on “Dream Island”. The island would not be the same without you.”

On 9 September 1967, Bobby was Best Man for the first and only time. To Colin and Barbara, who celebrated their Golden Wedding anniversary last week.  And here they are, fifty years later, at Diddley’s View. Congratulations Colin and Barbara.

Colin, Barbara and me, with a somewhat older and slightly less dapper Bobby at Diddley’s View, 50 years later.

Lighting a candle to Diddley.

Our candle this week is lit again in the wonderful St David’s Cathedral. Where Diddley and Bobby saw Handel’s Messiah sung in 1999 by a Welsh choir.