Along the River Esk.

Bertie… On a glorious September morning, we were walking alongside the River Esk to Whitby. The railway line adjacent to the path. Approaching a beautiful brick viaduct a steam train passed. We knew it would soon be back. I just knew this was the start of another story. One to be called “Just Three Days”. A Yorkshire special.

I was placed in my most impressive aspect. We were ready. When Joe appeared. Also walking towards Whitby. He said …“there is a story behind that bear isn’t there?”. His astute observation led to his own story. Sharing the difficulties of life with a complete stranger because of me.

Bobby… This blog has a life of its own sometimes, created by people wondering what an old age pensioner is doing with a rather striking bear. Instinct determines how much I tell them. With him it was the full story of alcoholism. In doing so it creates a responsibility for the integrity of what is told in return… 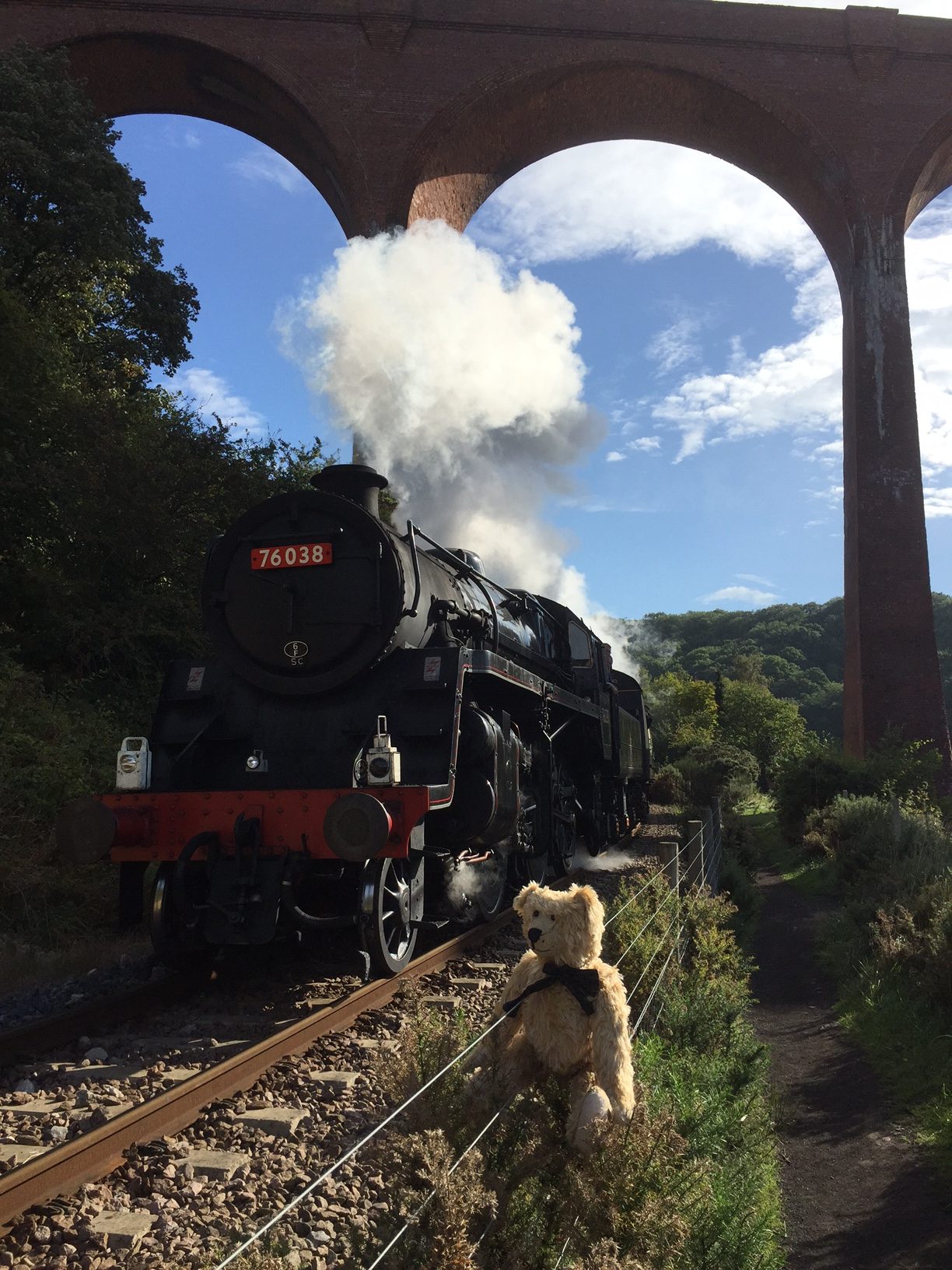 Bertie posing by the train.

Joe… When I was young my father became an alcoholic. He changed completely and made life hell for my mother. I was a teenager and left home young, as I couldn’t stand the conflict. Sometime later, my father found AA and dried out. Life was so much better for everyone. Most importantly my mother. In desperation, she had found Al Anon and found comfort in a fellowship where people shared their common problems of other people’s drinking. She was a member for fifteen years and that encouraged him to go to AA. They were happy again. My mother told me that Al Anon had saved both of them.

And then my mother got cancer and died. My father was devastated and simply couldn’t cope. I had my own family and could not help, but feel guilty that I couldn’t help my father more. He started drinking again. Declined rapidly into full blown alcoholism. I was helpless, but saw him regularly. The last time I saw him he said “I can’t stand it anymore. I want to be with your mother”. Two days later he was. Taking his own life at 62.

So this blog is a tribute to a fellowship that is not that well known, unless the disease of alcoholism affects your life. A disease that is misunderstood by many. Has a stigma that is hard to defend when the sick person quite often resorts to unacceptable behaviour. Rather than preach, I have copied the home page of Al Anon for you to read and maybe think about people in your life. The original reason for me finding the fellowship has gone. I am now one of many members wanting to give back what I feel I owe and have in experience and understanding. 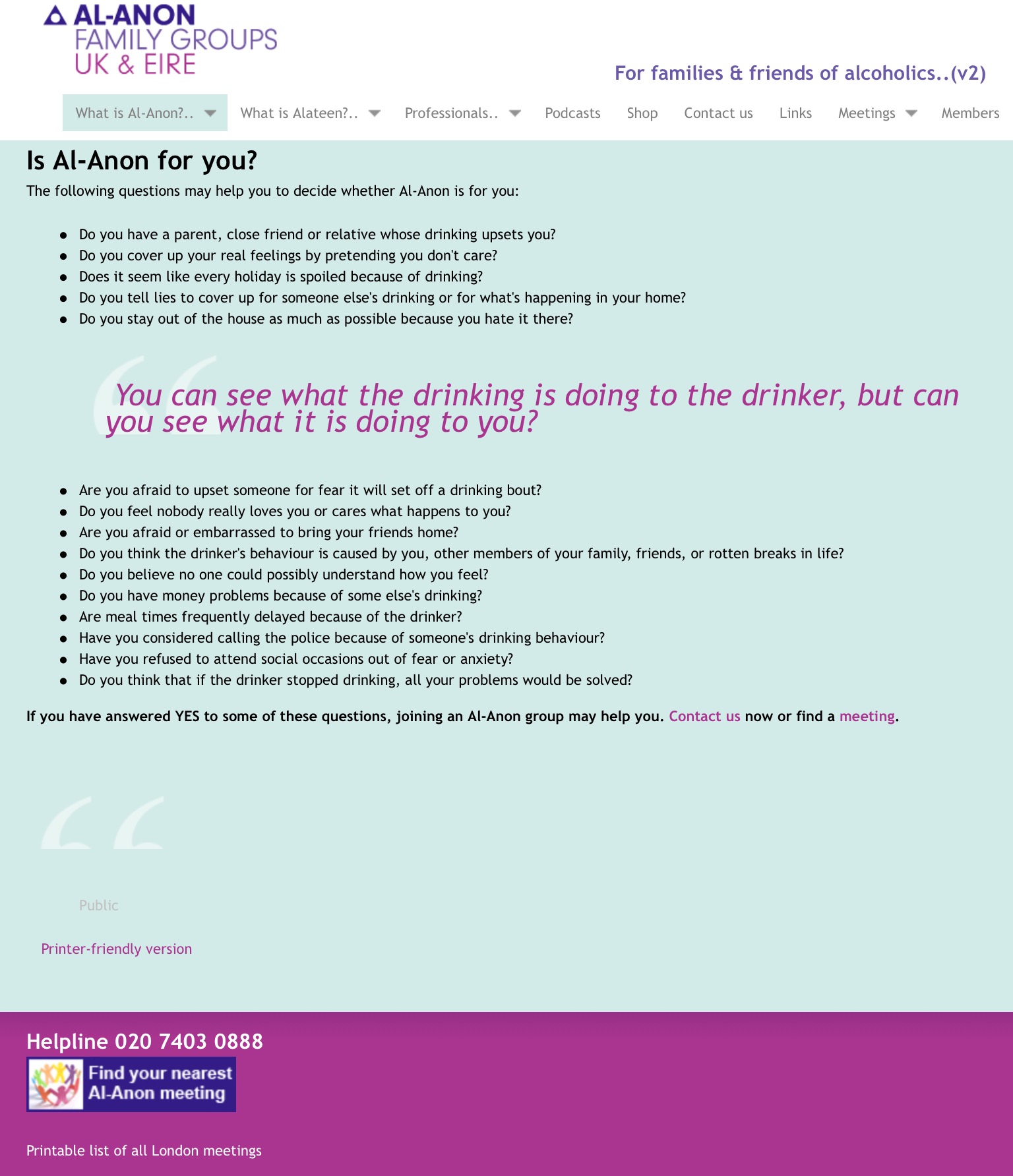 My good friend Jennifer has her own story from Al Anon. I am pleased she is lighting this week’s candle. Once again in St Martins in the Fields. 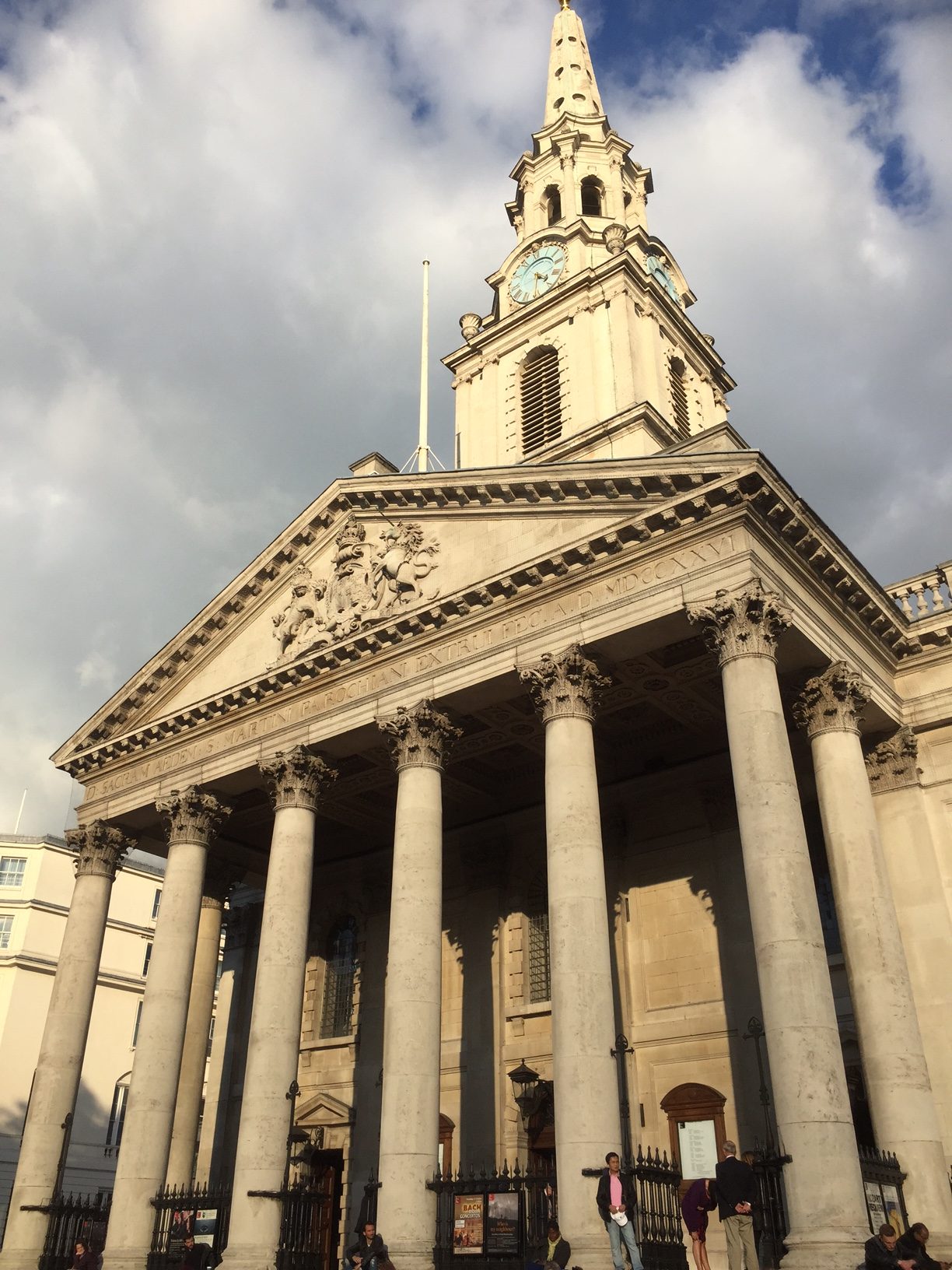 St Martin in the Fields

Jennifer… Every time I speak about the horrors of alcoholism I always start with where I am today and how grateful I am to have found Al Anon. Today I have peace of mind, it may only be for T.O.D.A.Y. A prevalent slogan of AA is “Just for Today”. 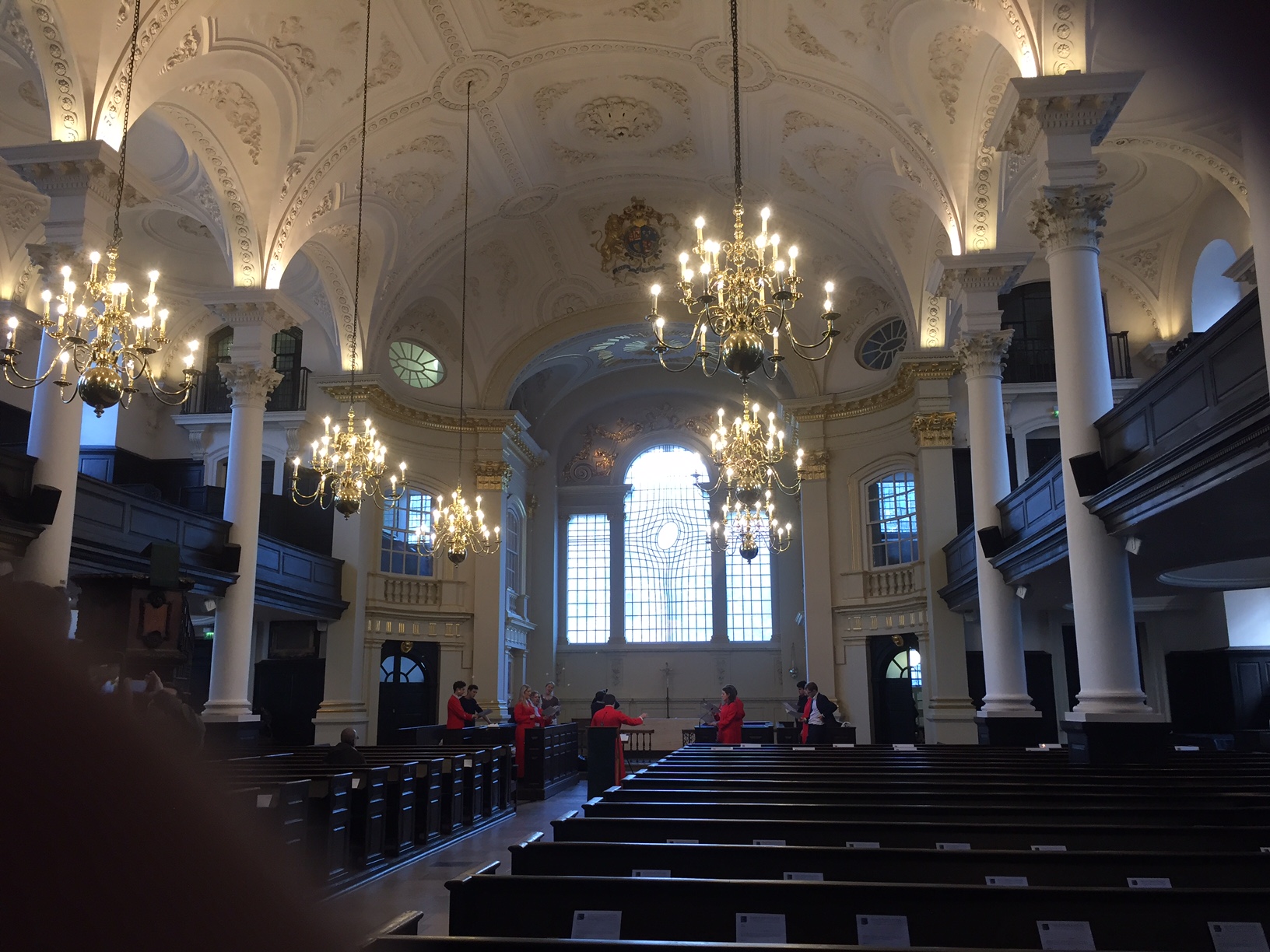 Inside St Martin in the Fields.

I was married to an alcoholic and, unfortunately, the gene passed to both of my children. I managed to get away from the marriage when my son and daughter were quite young, in the hope that they would not be influenced by their father’s drinking habits. At that time, of course, I had no idea about alcoholism, nor that it is an illness, nor that it can be passed on to generations.

My son was introduced to alcohol at quite a young age. I never really noticed it, to the extent that, as he grew into an adult, by the time he was in his twenties the alcohol had taken over his thinking, affected his behaviour, changed his personality, ruined many relationships and almost ruined our family life. Over a few years he was married and divorced twice in quick succession, mostly through drinking to excess, spending copious amounts of money on booze and anything else to enhance his mood and behaviour. He fooled everybody.

I finally had a light bulb moment and went along to my first Al Anon meeting after years of suffering at the hands of the alcoholic(s) in my life. Sharing experiences with complete strangers eventually gave me the strength to remove my son from my home and, for a while, from my life completely. Removing him was the hardest thing I have ever done, but I had to do something SO drastic for him to realise that enough was enough.

It had to be the worst few weeks of my life and to a degree the most calming. I had made a decision to remove him from my home, where he had wreaked havoc, stolen money from me, made a constant mess in the home, constantly falling over drunk and breaking furniture, lights, and anything he landed on.

Once he had left, I had my life back. As is suggested in Al Anon literature, you have to look after YOU and your wellbeing. It’s common sense. I continued to attend Al Anon meetings, shared my experience, strength and hope and continued to thrive, in the vain hope that one day my son would follow suit and accept that his behaviour, his addiction, had taken over his life.

He eventually did have his own light bulb moment and attended his first AA meeting almost 3 years ago. I don’t really know what happened to make him accept his illness. All I do know is I now have the son I have always wanted. He is sober and clean, happy and free of the burden of alcohol, for today anyway.

And so I am Lighting a Candle for Diddley. I never knew her, but know how much she was loved and is missed now. This candle is also for my son and all those afflicted by the disease of alcoholism.

The Serenity Prayer is the non religious version of the prayer adopted by AA and Al Anon and part of every meeting. God being whoever you choose. 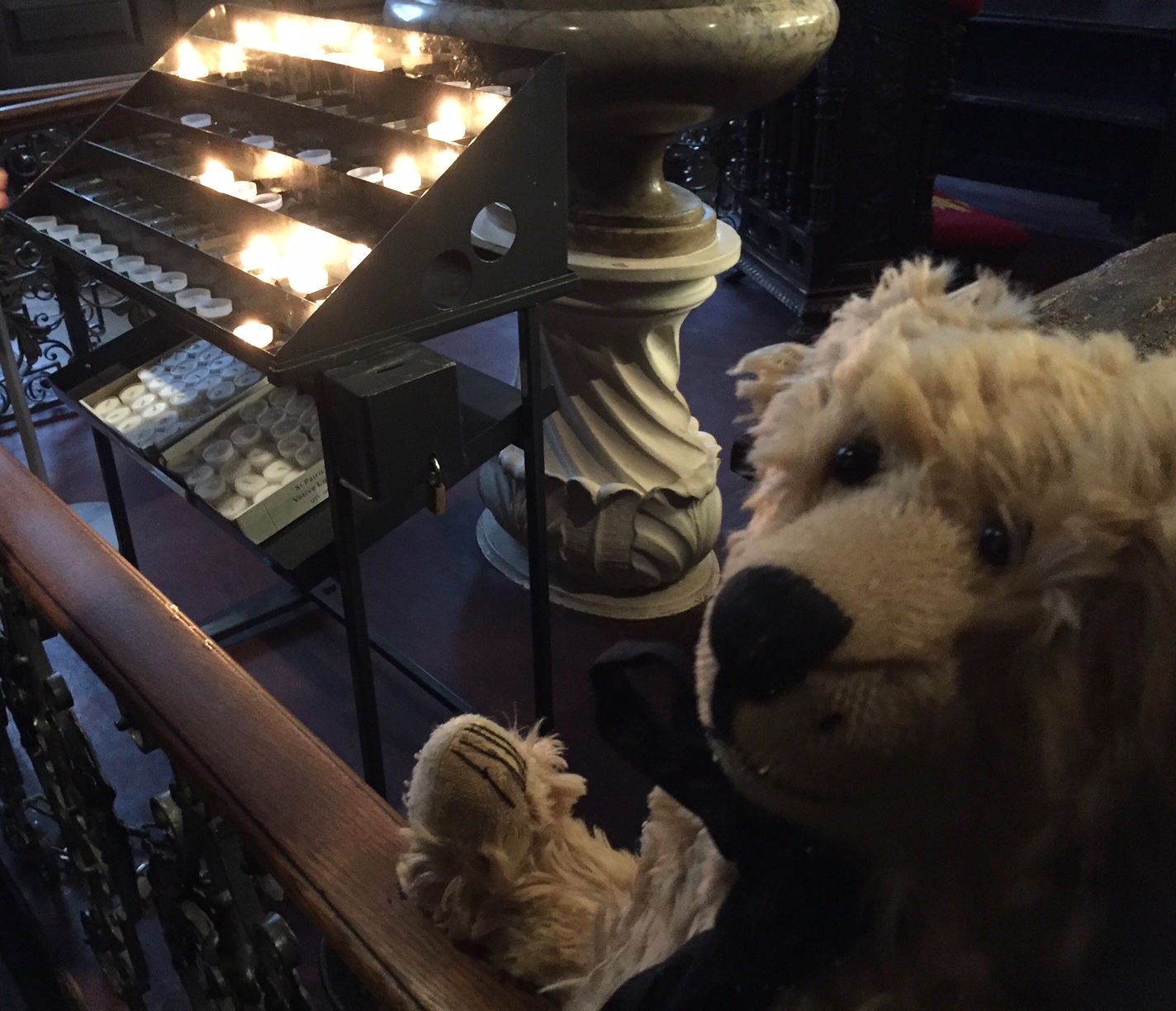