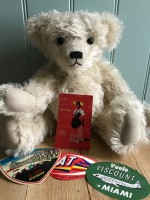 Bertie: “Ere Trev, owd you fancy presenting my blog next week? Trevor’s Stickies, we could call it!”

Trevor: “Do you mind! My name is Trevor. Maybe I should be grateful to you for running the naming competition. But, let’s be honest, it was partly your acquiescence to my anonymity that left me a Bear Without a Name for twenty years.”

Bertie: “Or you being bleedin miserable”.

Trevor: “Oh dear. Do I sense a little paranoia?”

Bertie: “I was twice as dear as you.”

Trevor: “And twice as common. Quality before quantity, say I. Let’s desist from this bearish argument and concentrate on your request.”

Bertie: “Gawd. Luv a duck. Give a dog a bone and this is what you get. Do you want to present or not mate?”

Trevor: “I am not your mate and unlikely to be your friend, given our cultural differences, but I must express a nascent interest in Bobby’s boyhood hobbies. The ones shewn in the blog about me. www.mindfullybertie.org.uk/little-white-bear. You may also note that Kristian from Calimesa, California has not been pictured with his prize for his inspired choice .

Kristian with his prize.

A “Bobballs” horse. Named by him as Gertie. A filly, to you and I!

Trevor: “Well done, Kristian. I really like ‘Trevor’. Suits me.”

Bertie: I suggest you start with some of Bobby’s sticky labels. And tell my beloved followers what they are all about.”

Trevor: “Thank you. You could have said that from the start!”

Bobby grew up in the fifties. A time when all schoolboys seemed to be collectors. There were girls around, but they were avoided at all costs. Especially sisters. The first universal collecting hobby was postage stamps. Most boys had their albums and you could buy packets of assorted stamps from all over the world from WH Smith and other shops. Carefully sticking them in the right pages of your album with special stamps stickers. But this was indoors. Those who sort adventure went out on buses and trains (and trams) with their Ian Allan notebooks (a future Trevor blog). Collecting train numbers and names. Buses and their depots. Even tube trains had a limited appeal for some. Trains, of course, had a massive following and some erstwhile trainspotters can still be encountered all over the heritage railway network. In their seventies and still with their notebooks. Rucksacks instead of satchels. Bobby wants it made clear that he is an enthusiast of trains now. Not a trainspotter.

But one day, after just a couple of years on the stations the dirt and grime of railways were totally wiped out by the glamour of aircraft. He became an obsessive plane-spotter, until the day his girlfriend gave him that ultimatum. “Planes or me”. And he made the wrong choice. The hectic years were between 1957 and 1961. During that time he collected everything he could get his hands on to do with aeroplanes. Including a piece of an Indian Air Force Hunter jet that he has to this day. In his shed. Who would guess what it was?

Tailplane Hinge. Acquired at an aircraft scrapyard in Mitcham.

He went to the airline offices in London. He wrote to airlines and manufacturers all over the world, expressing a need for material for a project he was writing. Always addressed as Master Robert Ball, he received back an amazing amount of goodwill literature. Photographs, badges and, for the purposes of this blog, sticky labels. That’s why we are calling it “Trevor’s Stickies”. But they’re not mine – there’s his! He also exchanged (and even sold) spares on the terraces of Queen’s building London Airport. Or simply pinched them from the airline desks.

And he still has more or less all of it. More than anything, he would like to share it with you as, one day, it could land up on a skip or, if Andrew is listening, be offered to enthusiasts clubs.

Sticky labels were a phenomena back then that were an art form in themselves. Designed for baggage, he also has cardboard tie on labels.

Some of Trevor’s Stickies.

For this first presentation, the airlines featured no longer exist. None of them.

Aquila Airways, London. This is the best and the last…

Pan American World Airlines. Later known as PanAm. Possible the most famous airline of all. Bankrupt and ceasing operations in 1991. A very long story.

Trans World Airways. TWA. Bobby’s favourite, for its simply beautiful Super Constellations. And the wonderful sound of four Wright radial engines as they floated down to land at Heathrow. Another long story. But bankrupt. Ceased operations in 2001.

British Overseas Airways Corporation. Since 1939, BOAC was Britain’s most famous airline. Ironically, formed by a merger of Imperial Airways and British Airways Ltd. Especially overseas. It joined with BEA (British European Airways) to form today’s British Airways in 1974. Famous for its rather stuffy, elitist imagery, its sticky labels followed suit. But then it flew the world’s first jet airline. The Comet. And later, of course, Concorde.

British European Airways. BEA. Had a much younger image. Bobby nearly worked for them. Passing examinations, right up to the last interview. Air traffic control doesn’t sound good for a GAD sufferer! The airliner outline is the Vickers Viscount, which should get its own story. Merged with BOAC to form British Airways in 1974.

Sabena was Belgium’s national airliner from 1923 to 2001. It seems inconceivable that such a famous airline should go bankrupt. Like many others, it wasn’t just its own fault, but the victim of world events. Ceased operations 2001.

To Switzerland by Sabena.

To Greece by Sabena.

To Italy by Sabena.

To Spain by Sabena.

To the French Riviera by Sabena.

Trans Canada Air Lines was Canada’s flag carrier from 1937 to 1965, when it became Air Canada.

Seaboard & Western Airlines was founded in 1946. Taken over by Flying Tiger Line in 1980. Eventually became part of FedEx.

Central African Airways was formed in 1946. The upheaval of that part of the world led to it ceasing operations in 1967.

They actually flew Comets 1’s until they were grounded.

North Central Airlines. An American regional airliner. Bobby loved the logo, known as “Herman the Duck”, and nearly painted it on his van. 1944. Ceased operations 1979 through merger.

Continental Airlines was a big American player from 1937-2012, when it merged with United Airlines. They bought British Viscounts in 1958, which Bobby saw at Wisley Aerodrome pre delivery.

You can still buy a model and I can see Bobby “thinking”.

Here’s some British ones from the past….

Small “I don’t believe it.” This airline was based at Blackbushe aerodrome on the A30. The hangars and operations were either side of the A30. When they wanted a plane they closed level crossing gates and towed it across a main road.

For a while used Avro Yorks that were based on the Lancaster bomber.

Just think. Drive to Lymphe in Kent. Your car is driven into the Bristol Freighter. Room for three cars and 20 passengers. Flown to Le Touquet and off you go.

Bertie: “Trevor! Time to declare. There are masses more. And he really wants to finish on this…”

Aquila Airways. The rarest and most impressive label. Formed in 1948. It only lasted ten years. But years in which the final hoorah of a once great method of transport was played out. By flying boat from Southampton Water to Madeira and the Canary Islands. Carrying just 24 passengers with day and night accommodation, or 36 daytime. One day we may well write a flying boat blog.

Caption: “The Vickers Viking cabin, with the main wing spar running right through it… A popular area to choose to sit to watch the mountaineering efforts of their Air Hostess…

The Vickers Viking airliners shown earlier were “a quick fix” to get an airliner into production pending the arrival of the world beating Viscount. Like many post war airliners, it was based on a bomber. The Wellington. This slightly saucy cartoon shows that in their haste to build and operate this small airliner they could not redesign the spars for the wings. As you can see, you had to climb over them! Once again there is an example at Brooklands Museum.

How appropriate that Trevor should light the candle this week in the company of that British masterpiece. The Vickers Viscount. Brooklands has one you can go in.

You may wonder about Trevor’s new apparel. To stop his droopy countenance we have fitted him with a belt. Almost a corset. And it works! Do we leave it as it is. or get him some trousers?