What is an eponym? Well, it is a word derived from the name of a person, real or fictional. A medical eponym is thus any word related to medicine, whose name is derived from a person.

It seems to Bobby that many people have heard him mention von Willebrand’s disease. Or, as he calls it sometimes, vW, the von willies, the blood lark. They know it is to do with blood. Quite often lots of it. And, on occasion, seriously debilitating. So, we thought after the exhilaration of those glorious days on the Pembrokeshire Islands what followed immediately landing on the mainland has raised a certain amount of interest in what exactly the “the blood lark” is. In doing so, we have engaged in a little research, including chats with the lovely Haemophilia nurse Roisin from County Galway, but latterly in St George’s Hospital. (St G). We also remember back in 2016 how he was an inmate in the Ruth Myles Unit at St G after yet another vW involved accident (St George’s blog).

Although a mystery to most people, vW is in fact a common disorder. About 1 in 100 people suffer from it. “Suffer” being a little subjective, as only roughly 1 in 10,000 of those 1 in a 100 are aware they have it, as the symptoms are mild enough not to attract further investigation. But we are racing ahead here. Who was he? 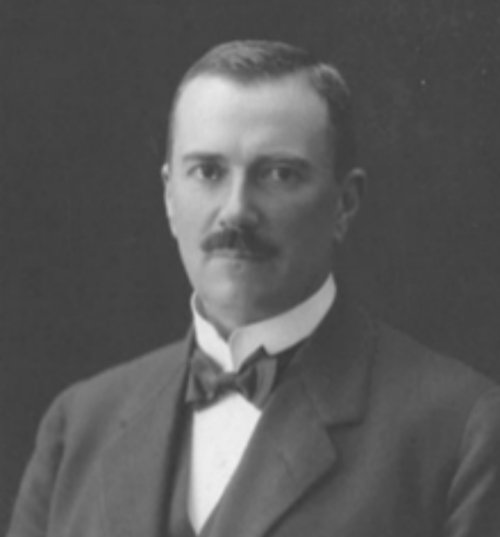 “Erik”. (Adolf has been dropped from many descriptions of him). Erik’s family originated from German nobility, whose ancestors settled in Finland in the 18th Century. He was born in Vaasa, then part of the Grand Duchy of Finland, in 1870. Itself part of the Russian Empire. In 1896, he qualified in medicine and worked at the University of Helsinki.

In 1924, Erik was consulted about a five year old girl with a severe bleeding disorder. Hjordis Sundblom was the ninth of eleven children living in a family from Föglö, one of the Åland Islands. Six of her siblings also suffered from the same condition. Three of whom subsequently died from it. He mapped the family tree and found more evidence of family members having suffered from the disease that he concluded was not the more familiar haemophilia. The Royal’s disease, of which Queen Victoria was a carrier, and inherited throughout the European Royal families.

The Åland Islands are fascinating too, in being entirely Swedish speaking, but still part of Finland. It’s worth reading the extract below in relation to the European Union. 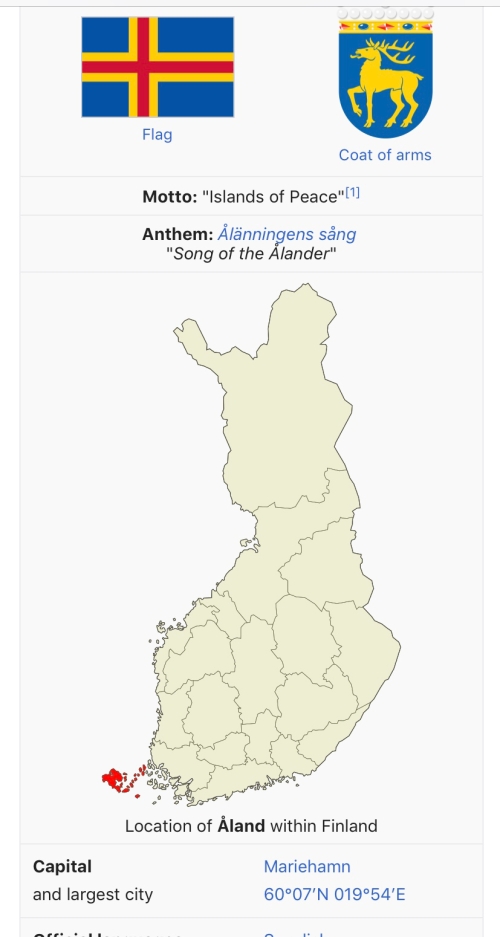 Map of location of Åland in Finland.

The autonomous status of the islands was affirmed by a decision made by the League of Nations in 1921 following the Åland Islands dispute. It was reaffirmed within the treaty admitting Finland to the European Union. By law, Åland is politically neutral and entirely demilitarised, and residents are exempt from conscription to the Finnish Defence Forces. The islands were granted extensive autonomy by the Parliament of Finland in the Act on the Autonomy of Åland of 1920, which was later replaced by new legislation by the same name in 1951 and 1991. The constitution of Finland defines a “constitution of Åland” by referring to this act. Åland remains exclusively Swedish-speaking by this act.[14]

In connection with Finland’s admission to the European Union, a protocol was signed concerning the Åland Islands that stipulates, among other things, that provisions of the European Community Treaty shall not force a change of the existing restrictions for foreigners (i.e., persons who do not enjoy “home region rights”—hembygdsrätt—in Åland) to acquire and hold real property or to provide certain services.[15]

Erik published his findings, which attracted international attention. So much so that, between the late 1930s and early 1940s, it became eponymously known as von Willebrand’s disease. As late as 1957 it was discovered that vW is caused by a deficiency of a protein in blood plasma.

Erik was described as a mild mannered and modest man, who in later life loved gardening and nature conservation. (Remind you of anyone?). He was a particular supporter and member of the Swedish speaking minority in Finland.

The Ball family had never heard of vW until Bobby’s mother, Dorothy, was diagnosed with it by accident following an operation in her late 80s. The whole family were invited to St G Hospital in Tooting South London around 1987 to meet the eminent haematologist Dr Bevan. He described them as “very interesting”. More family members, including Bobby, and later generations have been diagnosed as Type 2 vW. There are a number of types, and they all carry emergency cards. About 1 in 4 vW patients are type 2, making Bobby and his family increasingly unusual. 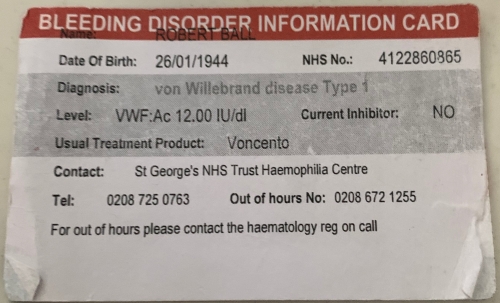 A well worn emergency card, with a mistake in showing type 1, Should be type 2.

For Bobby, it answered lots of questions from his childhood. He should never have played contact sports, for excessive bruising is a characteristic of the condition. Nosebleeds. Dentistry too, although the fear of bleeding enables him to have NHS dentistry at St G. He had a wisdom tooth out in hospital in 1967 and was readmitted three times in as many days with consequent bleeding. And yet, nobody mentioned vW. Accidents, operations and now heart attacks. Virtually everything involving blood, which is virtually everything. On the other hand, he could go for years without incidents and forget he even had it. In general, it is traumatic events, rather than spontaneous bleeds as it can be in haemophilia. There is well established, constantly improving, treatment which in general replaces the missing components involved in clotting temporarily by infusion of von Willebrand substitutes.

It has given him a different outlook on life and true friendship through the admirable Ruth Myles Unit at St G. At present receiving twice a week special vW medication from the lovely Roisin. It does, inevitably, have practical challenges. There is a register, now electronic, of all hospitals with haemophilia centres throughout the western world. When we travel, we should check where those centres are. Particularly abroad. Most big cities have such centres. But, out in the wild, who knows? Some years ago, Bobby and Diddley went on a Norwegian Northern lights cruise and he took the treatment with him. An accident on a boat at sea could be a real drama. It included syringes, which had to be cleared through customs with letters from St G. There have been so many incidents, but here is just one for the squeamish. Back in 2006, he rushed down the steep stairs at Laurel Cottage. Slipped and bounced down half the staircase.

“No problem”, he told Diddley. “I am still walking in Pembrokeshire tomorrow. Going by train.” Two hours later, he was taken, flat out, in the back of an estate car to St G in agony and passed out in A&E. Probably the worst bruise he had ever had, and woke up in the Ruth Myles Unit. His selfie instincts couldn’t resist the opportunity to send a thank you card to the hospital, emblazoned with the following pictures: 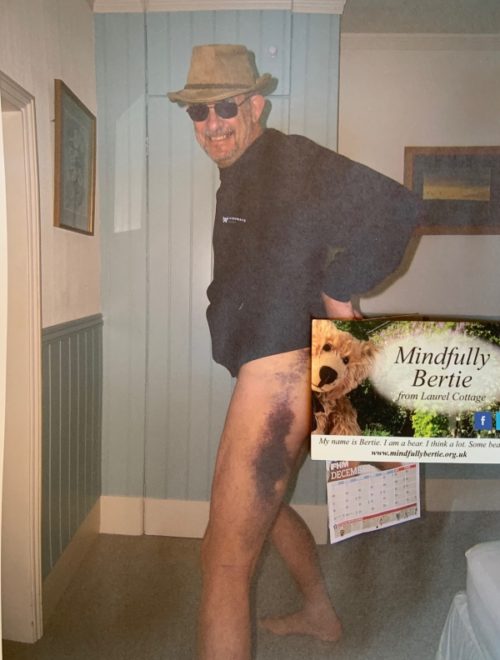 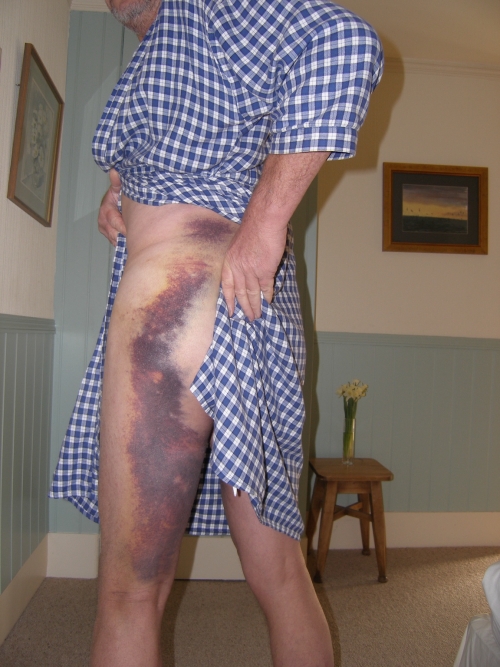 Getting better. The bruise slipped with gravity all the way down the leg as the days went by.

It’s fair to say that, in his younger days, he didn’t take vW seriously. It didn’t impinge on his life then as it does now. In these safety conscious times, it’s still important that the younger generation are not fazed by it at all. But always aware that an unexpected event could put them on a vW alert. Not all minor accidents become vW events.

Lighting a Candle for Diddley and the Haemophilia Society 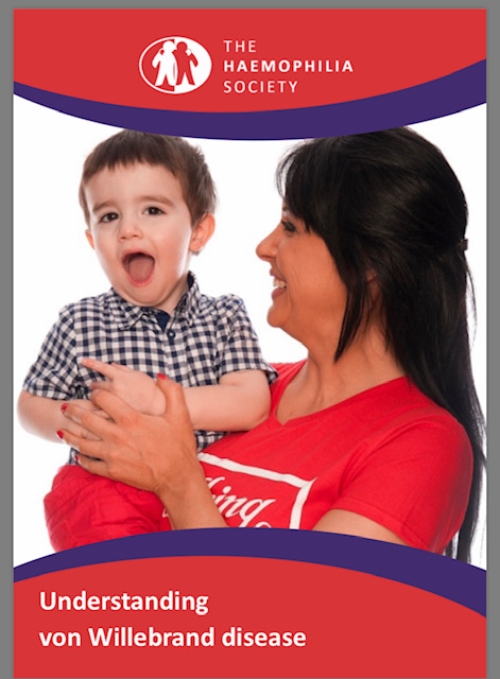 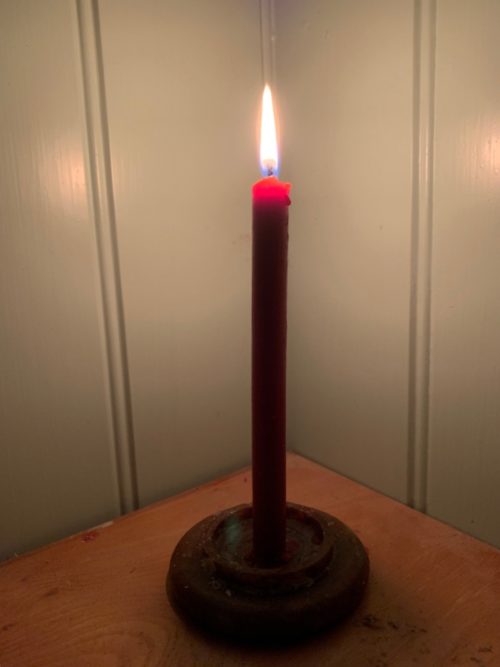